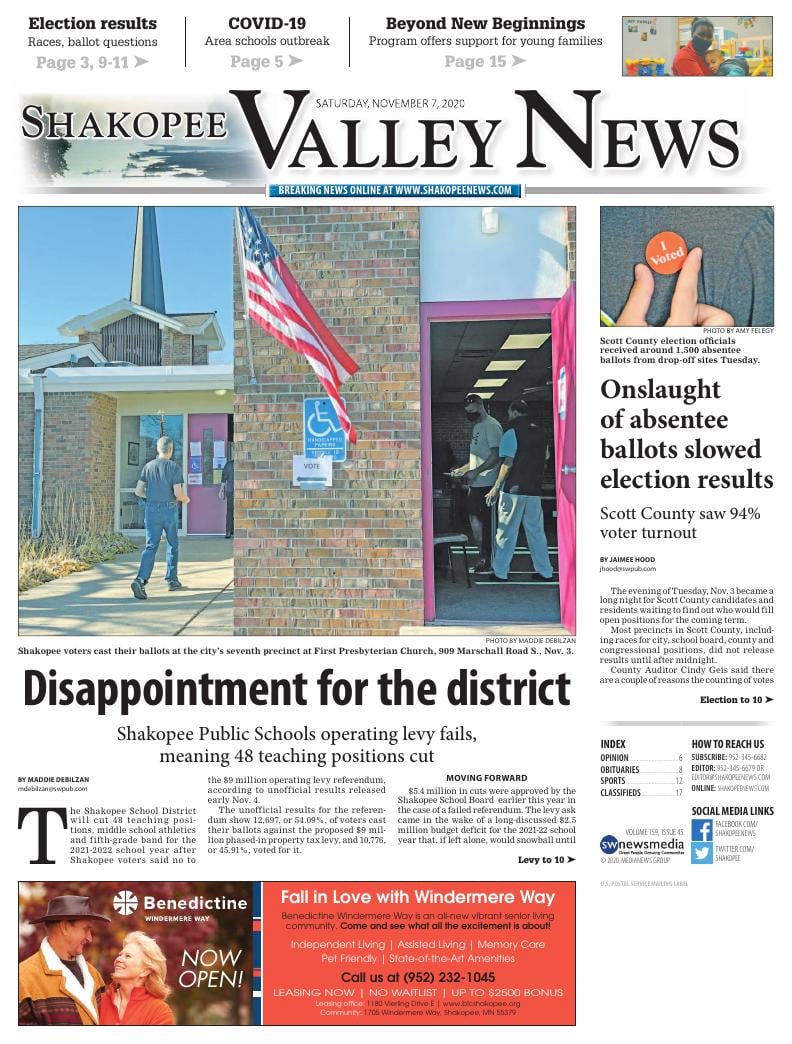 The Shakopee School Board has already approved $5.4 million in additional cuts that will be implemented because the $9 million phased-in operating levy failed Nov. 3.

The Shakopee School District will cut 48 teaching positions, middle school athletics and fifth-grade band for the 2021-2022 school year after Shakopee voters said no to the $9 million operating levy referendum, according to unofficial results released early Nov. 4.

$5.4 million in cuts were approved by the Shakopee School Board earlier this year in the case of a failed referendum. The levy ask came in the wake of a long-discussed $2.5 million budget deficit for the 2021-22 school year that, if left alone, would snowball until the district’s fund balance is $26 million in the hole by 2024. Since the levy has failed, cuts are needed to bridge the gap.

That’s in addition to the $2 million in cuts the district will already make the next two years, which will largely affect district administration, paraprofessionals and learning coaches. Those cuts will include Shakopee High School assistant principal, seven digital learning and instructional coaches, 10 paraprofessionals and a reduction of spending on Learning, Teaching and Equity.

The $5.4 million in cuts will be felt across the district. In addition to the 48 full-time-equivalent teaching positions that will be eliminated, fifth grade band and middle school athletics will be cut, along with several more full-time-equivalent positions ranging from custodial staff to paraprofessionals to high school counselors.

The district said earlier this year that a failed levy means it would need to make $11.15 million in budget cuts in the next five years.

“If we just make cuts, we’re ultimately hurting our students, which ultimately hurts our future,” board chair Kristi Peterson said before voting to put the levy on the ballot box at a school board meeting in July. “And I just can’t do that.”

Though the cuts have already been approved by the school board, a specific list of which staff members and teachers will lose their jobs has not yet been discussed by the board. Staffing decisions are typically made in the spring, the district said. Names will not be made public.

Peterson told the Valley News Nov. 4 that proposing another operating levy referendum to voters “will be a discussion point” moving forward. But she said the first thing the board will need to focus on is why it failed in the first place.

A loss for the district

The decision is a huge disappointment to the district, which has maintained that state education funding has not kept pace with inflation or mandates.

Peterson said she’s unsure exactly why the referendum failed, adding she is disappointed and takes full responsibility for the levy’s failure as chairwoman.

“I thought there was a positive vibe around the community around the levy,” Peterson said. “I don’t think there was one thing that caused it to fail; I’m sensing there’s probably a lot of contributing pieces.”

Peterson said some of those contributing factors include the financial stress among many families from the COVID-19 pandemic and the presidential election. She also added there may still be leftover distrust in the district from the dilemma surrounding former Superintendent Rod Thompson, who served prison time for swindling and embezzling tens of thousands of dollars from the district.

“I get it; people are skeptical. But at some point, you have to let go of that,” Peterson said. “Old news doesn’t get better with age.”

The school board offered a phased-in option which gave voters the opportunity to see little change in net tax impacts after debt service levy falls off the books next year.

Despite the shaky economy, board members were unanimously opposed to cutting teachers without giving voters the chance to take to the ballot box.

“It’s our job to improve the quality of education in our districts,” board member Matt McKeand said in June. “I don’t see how taking 48 teachers out of our workforce ... is doing that. Quite the opposite.”

Each of the three newly-elected school board members have also voiced their support for the passing of the operating levy referendum and encouraged Shakopee residents to vote yes.

Board member Tim Brophy, who was reelected this year, said before the results came through Nov. 3 that if the levy passed, it would help the district better focus on equity and building back trust with the community.

“If the levy fails, that’s going to have to be a big priority,” he said, referring to making decisions with fewer financial resources.

“I’m sure the results of the voting on the operating levy are incredibly disappointing to our students and staff,” Superintendent Mike Redmond said Nov. 4 in a district press release. “I also know our community is dealing with the economic pressures of the COVID-19 pandemic. In spite of the limitations on our resources, we will continue to do our best to serve our students and community.”

The evening of Tuesday, Nov. 3 became a long night for Scott County candidates and residents waiting to find out who would fill open positions for the coming term.

Most precincts in Scott County, including races for city, school board, county and congressional positions, did not release results until after midnight.

County Auditor Cindy Geis said there are a couple of reasons the counting of votes took longer in 2020 than in years past.

Multiple ballot drop-off locations throughout the county allowed voters to remain spread out in an effort to limit the spread of COVID-19, both early voting and on Election Day.

“We got nailed (Tuesday) with drop-offs,” said Geis. “Like, nailed.”

Scott County election officials got about 1,500 ballots that came in from these drop-off sites that needed to be processed and approved by the Ballot Board Tuesday afternoon. Geis said it was almost 7 p.m. Tuesday by the time these ballots were ready to begin being opened and recorded by county staff.

In some counties, there was a cut-off day for dropping off absentee ballots, and voters who did not do so before Dlection Day had to instead vote in-person at the polls.

Scott County allowed absentee ballot drop-off through Election Day, which meant there was an “onslaught” coming in at the last minute, Geis said.

“Usually on Election Day we barely receive any absentee ballots beyond what comes in the mail, which is usually very light by Tuesday,” said Geis. “We’re usually standing around just waiting to close our absentee polls after they are 100% counted. Not (Tuesday). (Tuesday), we were still processing because of the drop-offs.”

In addition to the counting of more drop-off absentee ballots than usual, election staff across the county were seeing long lines, especially in “huge precincts” like Credit River, Geis said.

There were some other snags with in-person voting — social-distancing requirements made lines so long that in one instance, they trickled out into the street, making driving around the polling location hazardous.

Geis also said some voters used their own ink pens rather than felt-tip pens on voting scanners, which made it so that Scott County staff had to take time to wipe down the equipment.

Voter turnout in Scott County was 94%, well above the state average of 76%.

“This number is an anomaly and it is unheard of in our county,” said Geis.

Despite all of its moving parts, Geis said she is proud of how the cities helped administrate this year’s election, and she’s heard positive feedback from voters so far on the flexibility the multiple drop-off locations provided.

“I think our readers and our voters are getting out to vote and taking advantage of all the options that we had to be able to cast their ballot in whatever fashion they choose,” said Geis.

As of Wednesday morning, the county still had a little over 2,800 ballots outstanding. Geis said they’re assuming half of those people went to the polls in-person, so those ballots won’t be returned, but they always have in the hundreds that never return their ballots “for one reason or another.”

Absentee ballots that were postmarked on or before Election Day have a seven-day grace period to be received and counted. Geis says they received about 30 yesterday, and expect to see a few more trickling in. Those ballots that are received before next Tuesday will be counted and processed, and the Minnesota Secretary of State election results website will reflect those updates sometime next week. 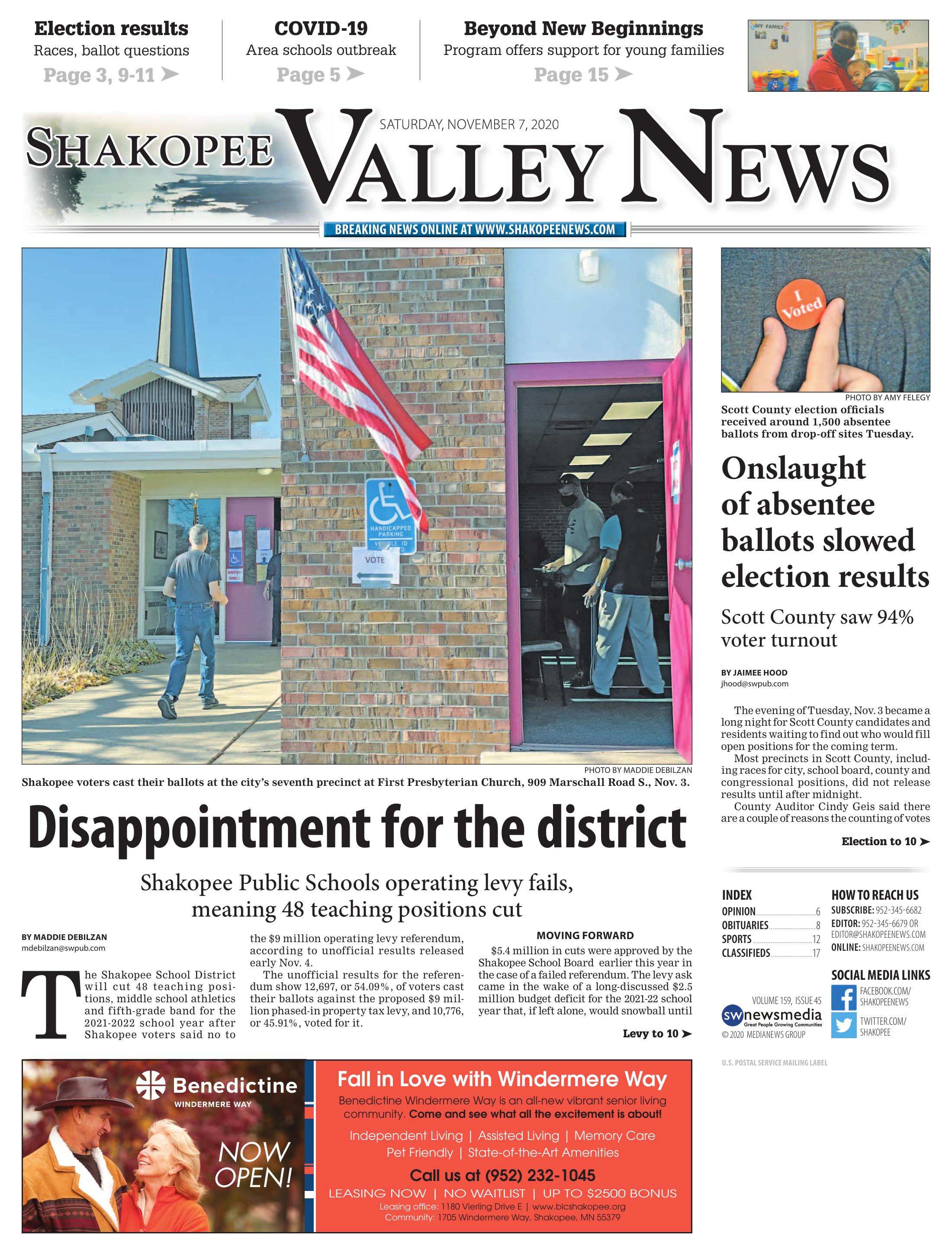