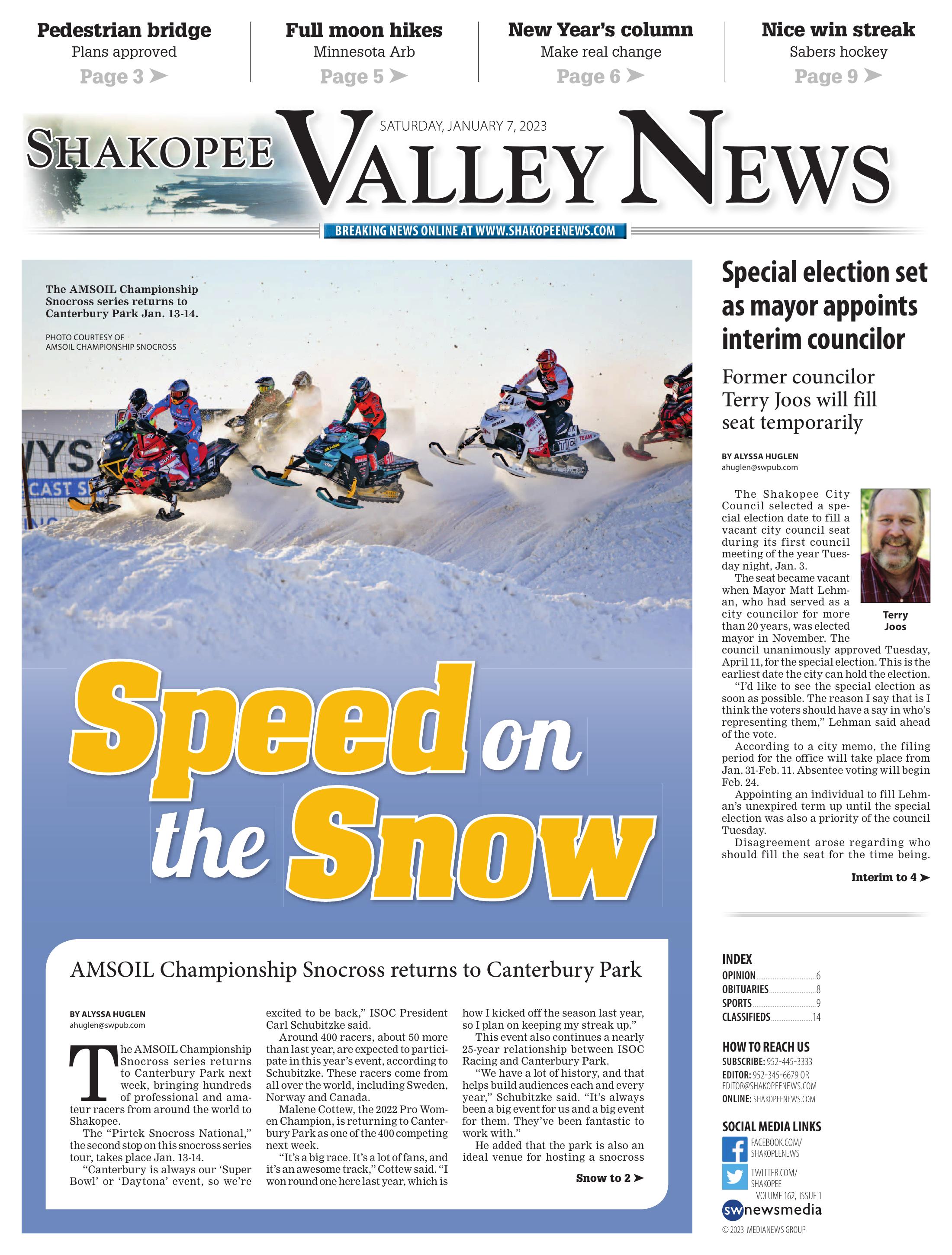 Around 400 racers from around the world will participate in the two-day event in Shakopee.

Malene Cottew, the 2022 Pro Women Champion, is participating in next week’s event. “It’s a big race. It’s a lot of fans, and it’s an awesome track,” she said.

The AMSOIL Championship Snocross series returns to Canterbury Park next week, bringing hundreds of professional and amateur racers from around the world to Shakopee.

“Canterbury is always our ‘Super Bowl’ or ‘Daytona’ event, so we’re excited to be back,” ISOC President Carl Schubitzke said.

Around 400 racers, about 50 more than last year, are expected to participate in this year’s event, according to Schubitzke. These racers come from all over the world, including Sweden, Norway and Canada.

Malene Cottew, the 2022 Pro Women Champion, is returning to Canterbury Park as one of the 400 competing next week.

“It’s a big race. It’s a lot of fans, and it’s an awesome track,” Cottew said. “I won round one here last year, which is how I kicked off the season last year, so I plan on keeping my streak up.”

“We have a lot of history, and that helps build audiences each and every year,” Schubitzke said. “It’s always been a big event for us and a big event for them. They’ve been fantastic to work with.”

He added that the park is also an ideal venue for hosting a snocross event. Canterbury Park’s indoor seating allows thousands of fans to enjoy the sport while staying warm.

“The events business in general has come back strong, and I know we will see huge crowds for snocross based on advance ticket sales,” Canterbury Park Special Events Manager Kerry Larson said in a statement. “With the amenities we offer indoors and great seating and sightlines throughout the facility, this is the premier location for this sport.”

Cottew said she also appreciates the big track and how visible everything is for guests both inside and outside.

“It’s awesome that you actually get to see all the racing, no matter where you are standing … you just get a lot of good racing going to Canterbury,” she said.

Face painting, a coloring station, vendors and autograph sessions are among some of the activities being offered at the park. Fireworks will also take place at the park both nights.

These activities, along with having some younger racers participate in snocross events, look to help make snocross more exciting and accessible to the whole family.

“The whole ideology behind it is just to build the future of our sport,” Schubitzke said. “We try to make it almost like a winter festival so kids and the family do come and can see and experience a lot more than just races.”

Mayor Matt Lehman was sworn in at the beginning of Tuesday night’s Shakopee City Council meeting.

Photo courtesy of city of Shakopee

The seat became vacant when Mayor Matt Lehman, who had served as a city councilor for more than 20 years, was elected mayor in November. The council unanimously approved Tuesday, April 11, for the special election. This is the earliest date the city can hold the election.

“I’d like to see the special election as soon as possible. The reason I say that is I think the voters should have a say in who’s representing them,” Lehman said ahead of the vote.

According to a city memo, the filing period for the office will take place from Jan. 31-Feb. 11. Absentee voting will begin Feb. 24.

Appointing an individual to fill Lehman’s unexpired term up until the special election was also a priority of the council Tuesday.

Disagreement arose regarding who should fill the seat for the time being. Councilor Jay Whiting nominated Josh Forsythe, who has served on the Park and Recreation Advisory Board and currently serves on the Planning Commission.

Whiting’s motion to nominate Forsythe was seconded by Councilor Angelica Contreras. But the motion failed on a 2-2 vote, with Lehman and Councilor Jim Dulaney voting against the nomination.

“It sounds like we’re just putting names out,” Dulaney said.

“That is a false accusation, sir. I did the research, I planned ahead, I knew it was on the agenda, and I brought a candidate,” Whiting said to him. “And I told last — you were at that meeting — I mentioned I’d bring a candidate.”

Based on state statute, the vote resulting in a tie then gave Lehman the authority to appoint someone to the seat. Lehman appointed former city councilor Terry Joos.

Lehman said his decision to appoint Joos came from wanting to fill the seat with a former council member who served in good standing as well as someone who did not run in the previous city council election nor has plans to run in the special election.

“I’m looking for somebody who has served on the council and somebody that is an independent thinker. Somebody that has more than half the time voted against me, and I expect that to continue, and that’s OK,” Lehman said.

But not all councilors agreed with this action.

“Well, that comes as no surprise that you nominated your own person,” Whiting said shortly after. “We knew it was coming to this.”

“You’re a strong believer of listening to the people and what people say, and I think both Jay and I had the opportunity to give a very good candidate. So, it’s not always what is said,” Contreras added.

Joos will be sworn in at the next council meeting Tuesday, Jan. 17.

This was Lehman’s first council meeting as mayor, along with Dulaney’s first as city councilor. They, along with Contreras, who was reelected to her seat, were sworn in at the beginning of Tuesday’s meeting.