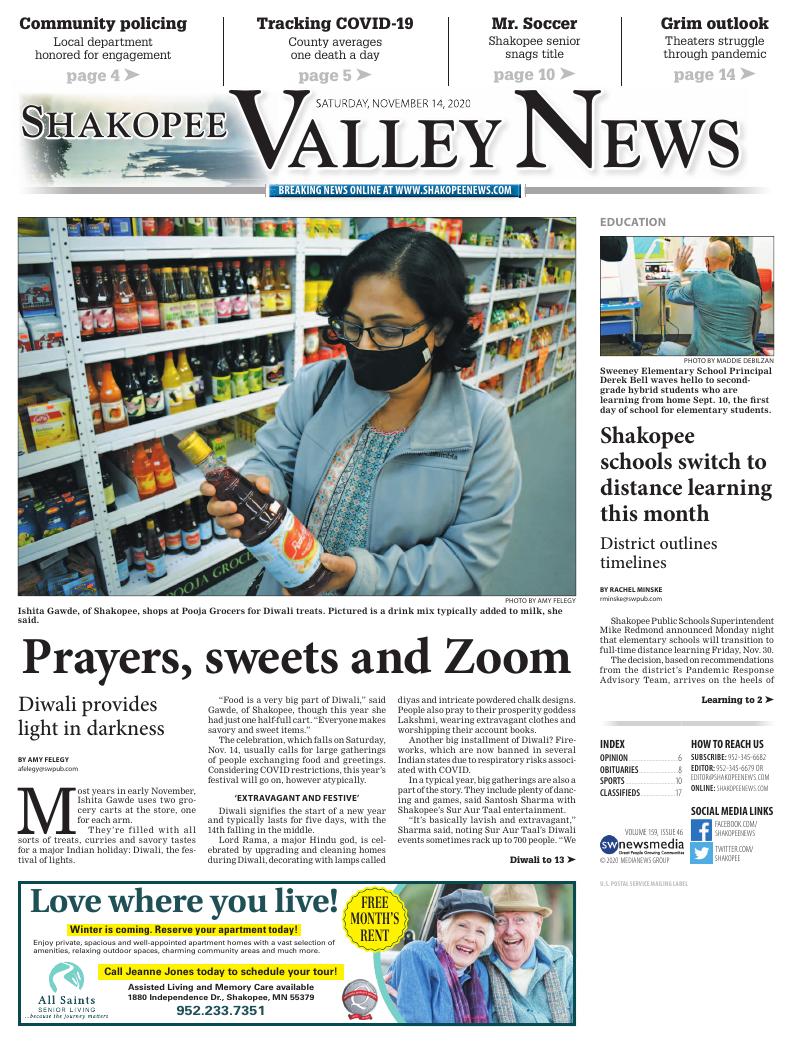 Ishita Gawde, of Shakopee, shops at Pooja Grocers for Diwali treats. Pictured is a drink mix typically added to milk, she said.

Sanjeev Gawde picks up a tray of sweets typically eaten during Diwali, the Indian festival of lights.

Loved ones gather to set off fireworks on the night of Diwali in a previous year.

Most years in early November, Ishita Gawde uses two grocery carts at the store, one for each arm.

They’re filled with all sorts of treats, curries and savory tastes for a major Indian holiday: Diwali, the festival of lights.

“Food is a very big part of Diwali,” said Gawde, of Shakopee, though this year she had just one half-full cart. “Everyone makes savory and sweet items.”

The celebration, which falls on Saturday, Nov. 14, usually calls for large gatherings of people exchanging food and greetings. Considering COVID restrictions, this year’s festival will go on, however atypically.

Diwali signifies the start of a new year and typically lasts for five days, with the 14th falling in the middle.

Another big installment of Diwali? Fireworks, which are now banned in several Indian states due to respiratory risks associated with COVID.

In a typical year, big gatherings are also a part of the story. They include plenty of dancing and games, said Santosh Sharma with Shakopee’s Sur Aur Taal entertainment.

“It’s basically lavish and extravagant,” Sharma said, noting Sur Aur Taal’s Diwali events sometimes rack up to 700 people. “We usually get together and we meet and interact, sometimes in community halls or gymnasiums. This year none of the halls or the events are going to happen.”

On the bright side, Sharma said he won’t have to deal with a common accessory of Diwali after the parties.

“There’s an unbelievable number of dishes,” he said, laughing.

In Chaska, the Sri Saibaba Mandir prayer center is rolling a little differently as well.

President Tejnarayan Mucherla said staff there want to celebrate in a grand way, but they can only do so much considering the pandemic.

He’ll invite some temple-goers to celebrate, offering smaller-scale and socially-distant options in person.

“Nobody expected COVID to come and hit so badly, but we are doing our part to embrace the community,” Mucherla said.

This year, Sharma is hosting all of this online via video streaming, something he calls “an unbelievable concept.”

“It will not be as extravagant and festive as it usually is. It will be on the low scale,” he said.

For some, that simplicity is just what they crave.

Chanhassen resident Shambavi Gupta said Diwali parties, usually celebrated the weekend before or after the holiday, have become “so massive.”

She said in the past three or four years, there’s just no time to breathe during Diwali. Everyone’s running from party to party, throwing money at attire, food, drinks and home improvement, she said.

Gupta would get together with 50-some women, dyeing henna designs and sharing food.

“Honestly, it wasn’t fun,” she said. “The purity and the family and the feel of the festival has completely vanished.”

This year, Gupta and a close friend — just one — got together. They sat. They chatted. They prayed.

“I loved it,” she said. “It was a very wholesome feeling. It wasn’t a mad rush of any kind.”

She said maybe COVID will encourage people to go back to their roots; to how their parents and grandparents celebrated Diwali, by reflecting and slowing down.

The Gawde family is staying home this year, too. Maybe they’ll host a Zoom meeting with family back in India or visit a nearby friend’s driveway to shoot fireworks. They’ll make sweets like usual, but only some. It’s just family this time, not a mass of people.

“We say, ‘OK, goodness is winning over evil,’” Gawde said. “We go from darkness to light.”

The decision, based on recommendations from the district's Pandemic Response Advisory Team, arrives on the heels of an announcement last week where families with secondary students were told they would transition to full-time distance learning beginning Friday, Nov. 20.

The decision to transition to full-time distance learning hinged on a number of factors, Redmond said, a primary one being following guidance from the Minnesota Department of Health regarding the number of cases per 10,000 within the county.

As the district continues to monitor case numbers and future projections, it's "very unlikely" schools will transition back to hybrid learning before the end of the year, Redmond said.

Detailed plans for transitioning students in the "in-person, hybrid and distance learning" — or IHD — model include the following:

Timeline for transitioning for secondary students:

Earlier this year, the state offered the following recommendations for schools based on the new virus cases per 10,000 people in the county:

Among all K-12 schools, excluding Shakopee Online and Tokata Learning Center, there were 38.3 cases per 10,000 among students and staff for the weeks of Oct. 26 and Nov. 2.

If the number of COVID-19 cases continues to rise, it's possible the district could transition to distance learning even sooner, Redmond said.

"We're certainly going to continue monitoring it, we want to make sure our buildings are safe," Redmond said. 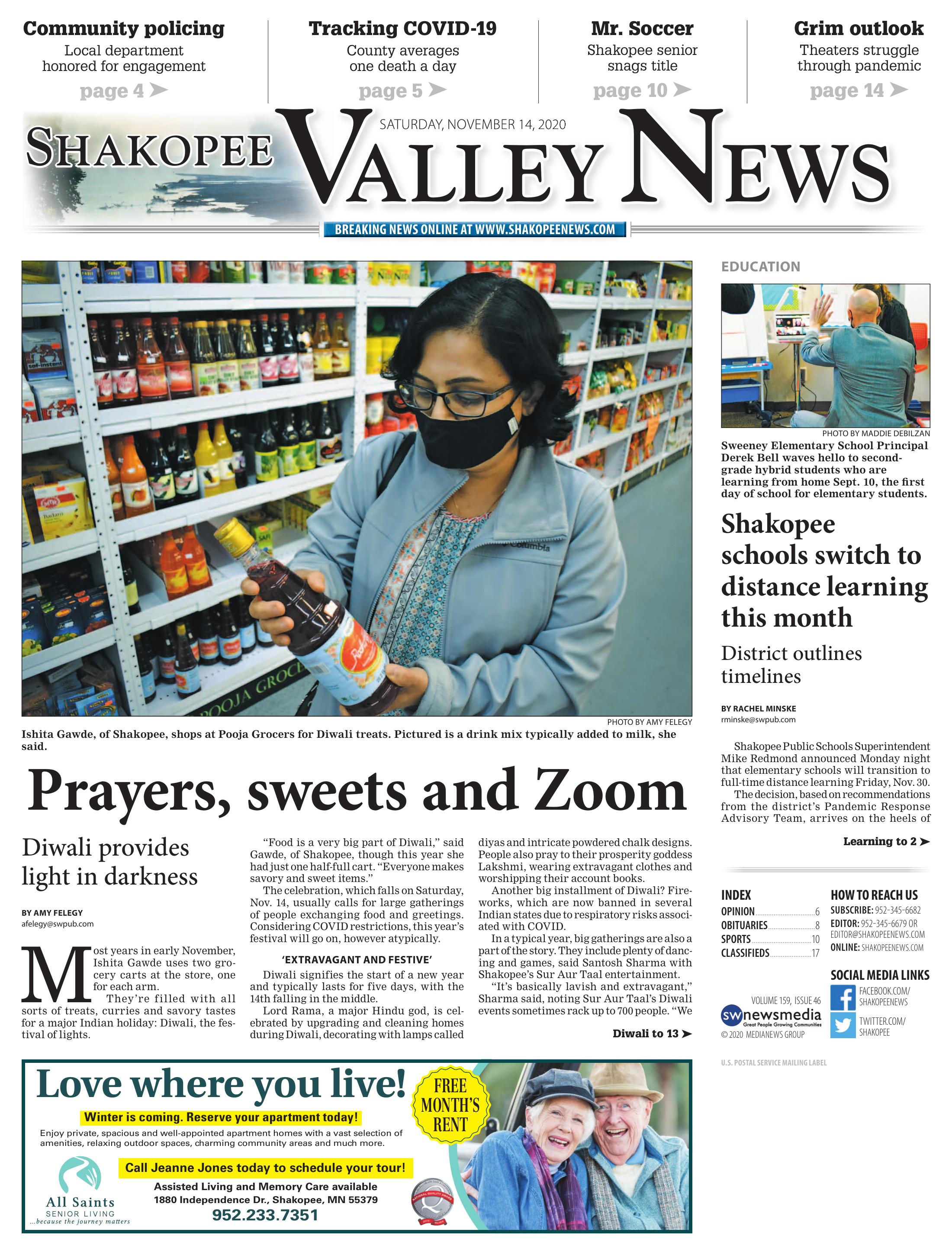