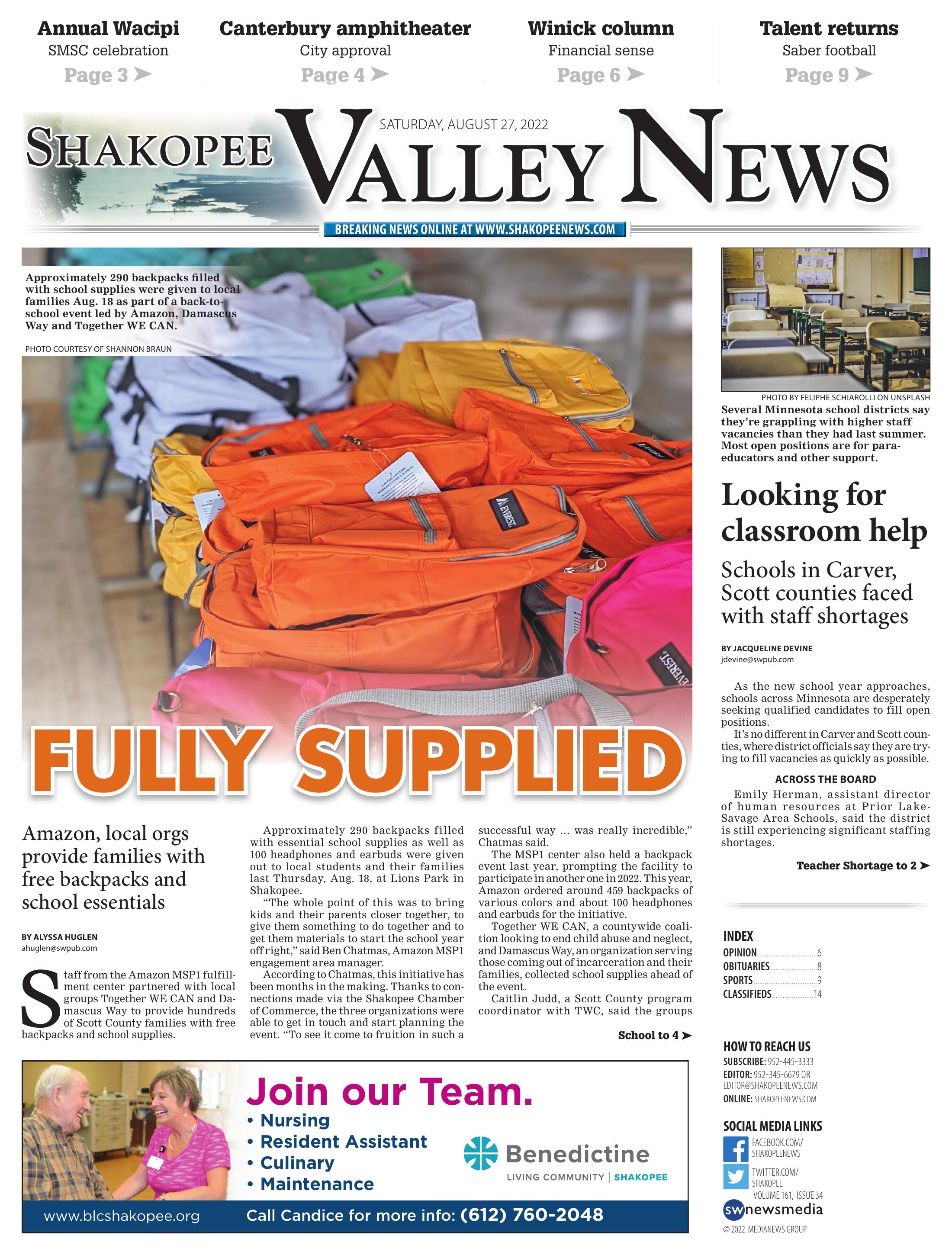 Approximately 290 backpacks filled with school supplies were given to local families Aug. 18 as part of a back-to-school event led by Amazon, Damascus Way and Together WE CAN.

Damascus Way was one of the three organizations involved in the event. The nonprofit, focused on serving those coming out of incarceration, is soon launching its new “Destiny Dads” fatherhood program.

Together WE CAN and Damascus Way provided the school supplies, while Amazon took care of purchasing the backpacks, headphones and earbuds.

Staff from the Amazon MSP1 fulfillment center partnered with local groups Together WE CAN and Damascus Way to provide hundreds of Scott County families with free backpacks and school supplies.

Approximately 290 backpacks filled with essential school supplies as well as 100 headphones and earbuds were given out to local students and their families last Thursday, Aug. 18, at Lions Park in Shakopee.

“The whole point of this was to bring kids and their parents closer together, to give them something to do together and to get them materials to start the school year off right,” said Ben Chatmas, Amazon MSP1 engagement area manager.

According to Chatmas, this initiative has been months in the making. Thanks to connections made via the Shakopee Chamber of Commerce, the three organizations were able to get in touch and start planning the event. “To see it come to fruition in such a successful way … was really incredible,” Chatmas said.

The MSP1 center also held a backpack event last year, prompting the facility to participate in another one in 2022. This year, Amazon ordered around 459 backpacks of various colors and about 100 headphones and earbuds for the initiative.

Together WE CAN, a countywide coalition looking to end child abuse and neglect, and Damascus Way, an organization serving those coming out of incarceration and their families, collected school supplies ahead of the event.

Caitlin Judd, a Scott County program coordinator with TWC, said the groups were strategic when buying supplies so they could cater to students of different ages and grade levels.

For elementary and middle school-aged children, backpacks were filled with traditional supplies like notebooks, pencils and folders — but also supplies for younger students like crayons, markers, colored pencils, scissors and glue.

The organizations also provided a variety of back-to-school snacks for families to pick up.

Staff from all three groups gathered at Lions Park to prepare the backpacks and give them out to participating families.

“Kids need a lot for back to school,” Judd said. “It was just nice to see that relief from parents … not having to figure out going to buy all those (supplies).”

This initiative is quite relevant to TWC and Damascus Way, as staff from both organizations talked about the impact access to school supplies can have on kids and their families.

“We can start off the school year with getting kids started with the right supplies and started on the right foot,” Judd said about TWC’s involvement. “As people experience challenges … they may feel more empowered to seek out resources and seek out help in the community.”

At Damascus Way, Executive Director Tierre Webster said this back-to-school event is interwoven with the launch of his organization’s new fatherhood program, “Destiny Dads.” According to the nonprofit’s website, Destiny Dads is looking to help fathers through providing “various services with the vision of enriching, empowering and equipping parents.”

“When we think about some of the challenges that kiddos have as they’re going back to school, often the challenges are that their basic needs aren’t being met. Housing is an issue. Often, kiddos are going to school and they’re hungry or they don’t have clothes. They don’t have the resources, backpacks, school supplies — things of that nature,” Webster said.

According to Webster, many of the men Damascus Way serves have a child in their life. He said an event like this allows for parents to bond with their kids and show an interest in their educational wellbeing.

“What we know is that fathers are less likely to reoffend if they have a meaningful relationship with their child, and children are more likely to be successful in education if they have this meaningful relationship,” he said. “That’s what we were trying to foster for the day. We were trying to get fathers and their children involved on the front end of their kids’ academic experiences.”

Almost 170 backpacks were left over from the in-person event. Chatmas said the three organizations agreed the remainder should be split between Damascus Way and TWC to distribute throughout the community.

Judd said at TWC, about 60 backpacks will be given to a childcare center located in Scott County, about 20 to the Jordan Area Food Shelf and the rest to WIC and additional children’s services in the county.

At Damascus Way, Webster said he plans for their extra backpacks to be given out to more families participating in Destiny Dads and to families of those incarcerated in Scott County Jail.

While Amazon will not be distributing any leftover backpacks, Chatmas said the fulfillment center plans to run similar events aimed at helping the community in the near future.

“We owe it to our community to support them in whatever way we can … what better way to kick it off in the fall than to give students backpacks and supplies to make sure they go back to school on a good note?” he said.

Photo by Element5 Digital on Unsplash

With the school year just around the corner, school districts across the state, including those in Carver and Scott counties, are still trying to fill open jobs.

Several Minnesota school districts say they’re grappling with higher staff vacancies than they had last summer. Most open positions are for para-educators and other support.

It’s no different in Carver and Scott counties, where district officials say they are trying to fill vacancies as quickly as possible.

Across the boardEmily Herman, assistant director of human resources at Prior Lake-Savage Area Schools, said the district is still experiencing significant staffing shortages.

“Unfortunately, Prior Lake-Savage Area Schools cannot pinpoint one factor that has caused the staffing shortage,” she said. “We believe it has been caused by many factors that schools across the country are also experiencing.”

The Shakopee Public Schools district has several openings, especially in the paraprofessional and health services departments.

“We have successfully hired over 90 educators and have the standard last- minute openings, which we are fortunate to have active candidates for. As with the start of any school year, we are short in the noncertified area,” Assistant Superintendent Jim Miklausich said. “Our Special Services Department, in particular paraprofessional and health services positions, have various needs and openings. Our partner, Palmer Bus Services, also has openings they are looking to fill. We are using a number of recruitment strategies and will continue to make progress.”

“We also have some health services positions — those are licensed school nurses and health assistants that are directly supporting students with medical needs and things that need to happen throughout the day with medications and support. Those are probably where we see the biggest gaps still,” Olson said. “It’s really those noncertified positions ... that we’re still trying to make sure that we can have our optimal numbers on.”

According to the Jordan Public Schools website, 30 vacancies need to be filled.

Many reasonsAccording to a recent American Federation of Teachers survey, dissatisfaction among teachers has grown in recent years.

More than 79% of respondents who participated in the survey said some of the top problems educators are facing are salaries and wages that don’t keep up with the cost of living, shortages of qualified teachers and staff, poor student discipline and a lack of support for dealing with disruptive students. They also said education was becoming too politicized and that teachers and staff were not receiving the tools they needed to meet their professional responsibilities.

Other large surveys of teachers such as the National Education Association and RAND report that burnout and shortages are the biggest issues that need to be addressed.

Olson said the pandemic is also partly to blame for teacher shortfalls but said there are many other factors.

“The pandemic had its own set of challenges. I think it’s really been over time and I think most school districts can speak to that. These noncertified positions are just getting tougher and tougher to fill,” Olson said. “I certainly think it keeps getting harder after COVID, but did it exist prior to that? Absolutely. I don’t think we can say definitively it’s because of COVID, but there’s probably some correlation.”

Olson also said part of the reason there’s a staffing shortage is because most people think a degree is always needed to apply, which is not the case.

“Sometimes I think it can be intimidating to the public because they don’t have a teaching degree or it’s not their area, but there’s so many of these positions that are about supporting human beings,” she said. “We can help you learn on site and on-job training. Maybe that will help expand the applicant pool because these are really rewarding positions.”

Recruiting effortsTo attract applicants, districts across the region are working harder than ever to recruit and retain employees.

“We believe we can have the greatest success through word-of-mouth and asking staff and community to share information about our opportunities,” she said. “We strongly believe we are a great place to work where staff get a chance to impact student learning every day. Our current staff and community members are the best to share out this information and help bring highly qualified individuals to join our Laker Team.”

Olson added that Shakopee district officials have been visiting college campuses to speak with future educators.

“There’s a lot we’re trying to do with the community colleges, whether that’s at Normandale or working with four-year colleges, on ways that we can try and develop that pipeline,” Olson said. “We have a lot of current students that are either seniors or they’re doing internships and we’re trying to tap into those and really trying to be flexible with the positions too.”