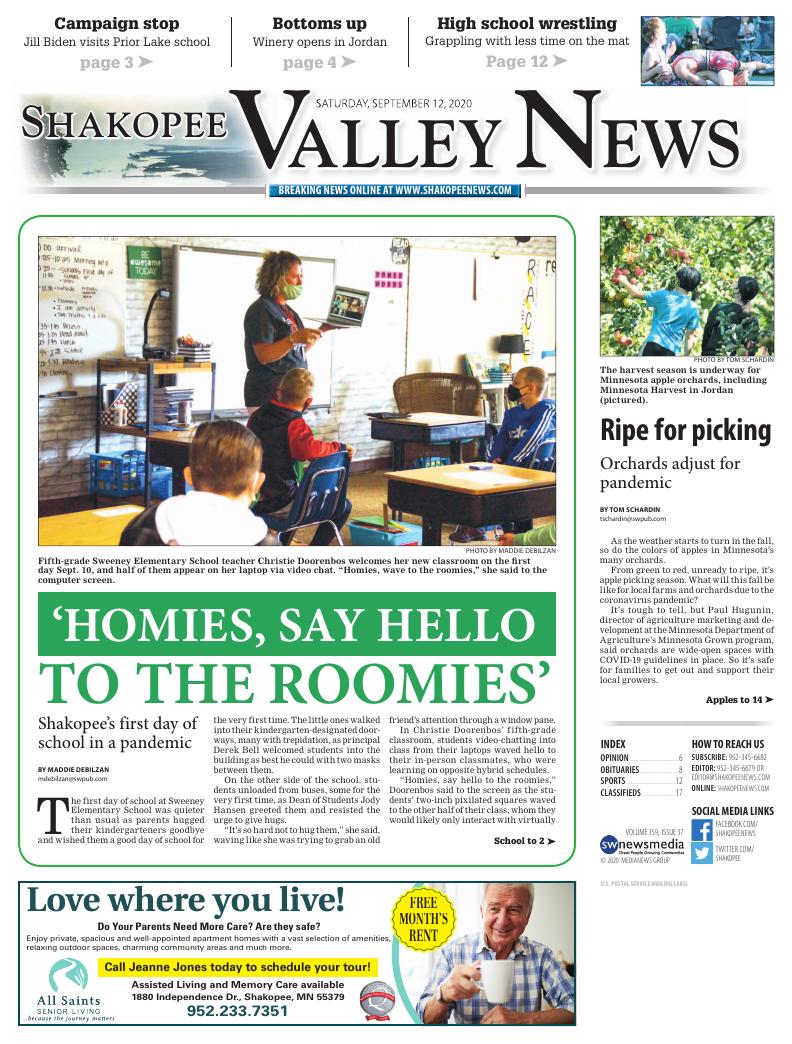 The first day of school at Sweeney Elementary School was quieter than usual as parents hugged their kindergarteners goodbye and wished them a good day of school for the very first time. The little ones walked into their kindergarten-designated doorways, many with trepidation, as principal Derek Bell welcomed students into the building as best he could with two masks between them.

On the other side of the school, students unloaded from buses, some for the very first time, as Dean of Students Jody Hansen greeted them and resisted the urge to give hugs.

“It’s so hard not to hug them,” she said, waving like she was trying to grab an old friend’s attention through a window pane.

In Christie Doorenbos’ fifth-grade classroom, students video-chatting into class from their laptops and waved hello to their in-person classmates, who were learning on opposite hybrid schedules.

Most first days of school consist of routine chaos for students — hugging old friends and last year’s teachers, high-fiving new friends and discovering their classrooms. Normally, the biggest challenge students face as part of that routine is getting back into one.

But this is 2020, and nothing about the first day of school was like previous years.

This year, students matched their masks with T-shirts and dresses. Extra furniture lined the walls of the hallways to allow for more social distancing in the classrooms. Dots were scattered six feet apart from each other on the floor to show students where to stand in the lunch line. Barriers covered the drinking fountain faucets. And lunchtime meant assigned seating.

Shakopee students who chose the “in-person, hybrid and distance learning” — or IHD — option for this school year will start this fall in the hybrid model under a recommendation from Superintendent Mike Redmond. The model means students will learn in person on an every-other-day basis. Their at-home days will consist of virtual, synchronous and independent learning.

Kindergarten students are the only ones who will learn in-person under this model. At Sweeney, each of the five kindergarten classrooms consisted of 13 students — a small enough number to maintain social distancing without splitting the classes up into a hybrid model.

Jessica Kulick used the first few minutes she had with her new kindergarten students, all of whom were socially distanced on the floor, to show them how to use hand sanitizer before eating breakfast.

Behind the scenes, staff members have worked tirelessly to create a safe environment for the students, Bell said.

Media specialist Katie Bohn will teach all her students except kindergarteners from her desk in the middle of the school’s library. So she created a cozy backdrop behind her desk, with her name spelled backwards so students could read it on their screens. Bohn also created a box for her computer to stand on.

“I like my camera up,” she said as she took the box out from under her desk before she had to get ready for her first class: the same fifth graders who had just finished saying hello to Doorenbos’ classroom.

Breakfast is served on carts that are wheeled to each classroom to minimize cafeteria lines before school. Each night when students leave, disinfectant will be sprayed throughout the building to kill any bacteria still lingering on surfaces or in the air. Hand sanitizing stations are seen everywhere you look.

Despite the changes and adjustments teachers have had to make this year, Bell said one thing’s for sure: with smaller class sizes, teachers have a unique opportunity to get to know each individual student better.

“The ability to get to know (the students) and give them their full attention… is something that I think will spark a conversation for the coming years, even after this is over,” Bell said. 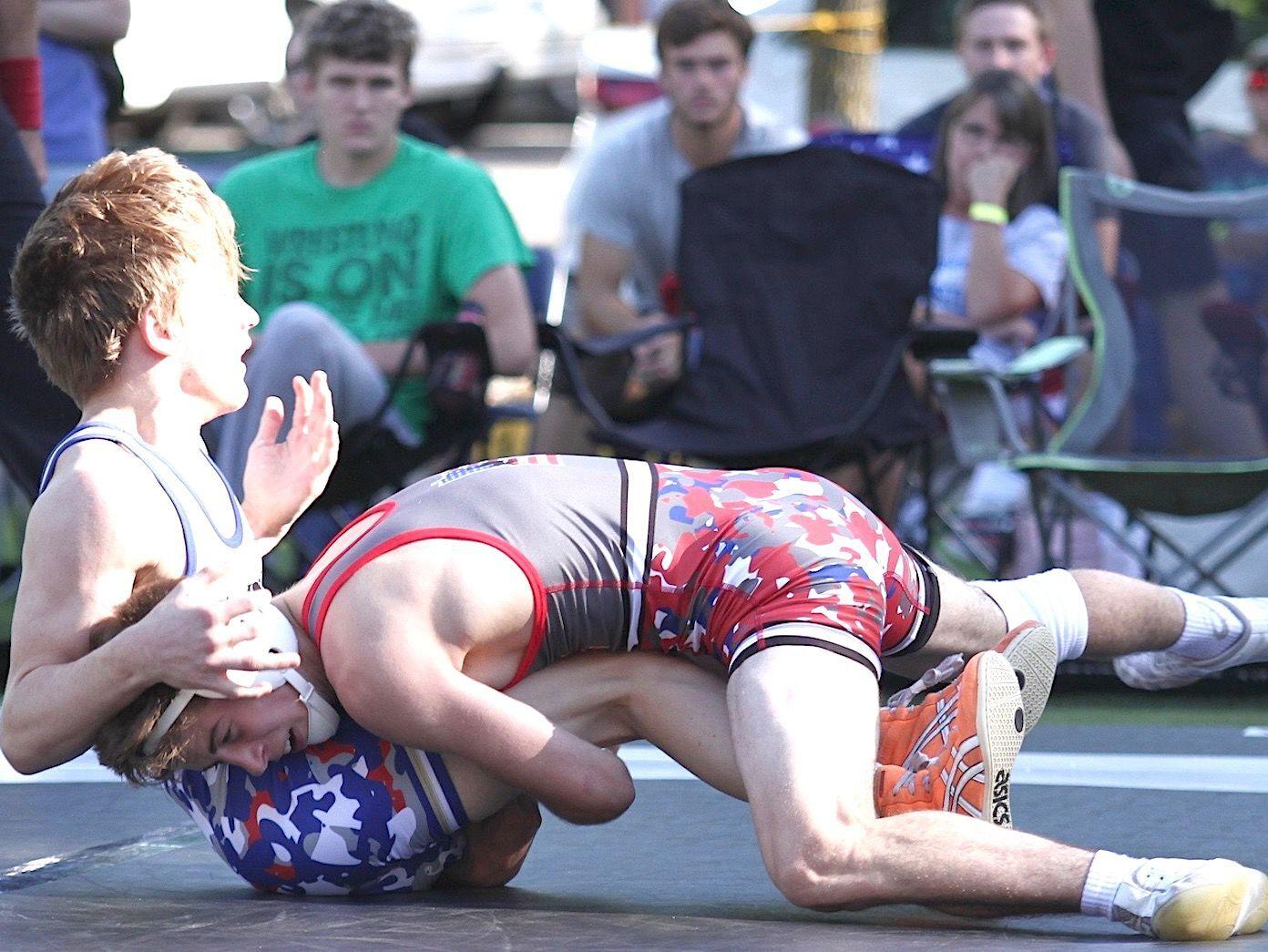 The harvest season is underway for Minnesota apple orchards, including Minnesota Harvest in Jordan (pictured).

The University of Minnesota has been breeding apples since 1888. Nearly 30 different varieties have been released over the years.

Minnesota Harvest in Jordan offers 27 different variety of apples that can be picked by customers through the end of October.

There are more than 100 apple orchards around the state listed in the Minnesota Grown directory.

Paula Red is an early apple variety that is available to picked at Minnesota Harvest in Jordan.

As the weather starts to turn in the fall, so do the colors of apples in Minnesota’s many orchards.

From green to red, unready to ripe, it’s apple picking season. What will this fall be like for local farms and orchards due to the coronavirus pandemic?

It’s tough to tell, but Paul Hugunin, director of agriculture marketing and development at the Minnesota Department of Agriculture’s Minnesota Grown program, said orchards are wide-open spaces with COVID-19 guidelines in place. So it’s safe for families to get out and support their local growers.

“I’m optimistic about all of the orchards,” Hugunin said. “People are eager to do things outdoors that are fun and feel good about doing it. Hopefully, people want to go out and support local orchards.”

In 2018, U.S. News selected Deardorff Orchards in Waconia as one of the top 25 places in the nation to go apple picking. The 125-acre farm also has the Parley Lake Winery on site, where customers can sample different kinds of wine made from the farm’s own grapes and apples.

Minnesota Harvest in Jordan has been around since 1971. Apple picking season usually starts in mid-August with some early varieties, but Labor Day weekend really kicks off the season that runs until the end of October.

Peter Welter, part of the wholesale apples and products division at Minnesota Harvest, said in a normal year Labor Day weekend would see as many 3,000 customers come through the orchard. This year, Welter said there was less than half that, roughly 1,200 people over the three days.

“In a normal season, many people would come here and stay half the day,” Welter said. “Now, we are seeing people just picking apples and leaving. Half of what we normally do for these months, we’ve been unable to do.”

There are plenty of apples to pick at Minnesota Harvest, but the pandemic has restricted or canceled other activities there and at other orchards, including entertainment, corn mazes, tractor rides, petting zoos and limited eating areas.

“Our hands have been tied with COVID,” Welter said. “It’s cut into our profits. It’s also been harder to find labor.”

Welter said the commercial side of the business is still doing well. Apples are getting out to grocery stores and local farmers markets.

Hugunin encourages shoppers to ask their local markets which apples are locally grown and which ones are from out of state.

Welter said one way to tell is if the apple is shiny or not, which means they are likely waxed to make them look more edible and stay ripe longer for stores.

“I don’t think they taste as good,” Welter said. “Our apples are not waxed. They go from tree to store.”

The University of Minnesota has been breeding apples since 1888. Nearly 30 different varieties have been released over the years, including ones that are ready to pick in mid-August.

The most recent early season apple to be bred was in 2017, when Rave and First Kiss were created. They are known to be juicy and tart, and are deeply colored red. They will keep post-harvest for up to five months.

One of the top varieties is Minnesota, and in many places around the U.S., is the Honeycrisp apple, which ripens starting in mid-September. Haralson is one of the more popular late-season apples.

Honeycrisp was named the Minnesota State Fruit in 2006, and selected as one of the top 25 innovations in over a decade in the 2006 Better World Report.

"People are eager to do things outdoors that are fun and feel good about doing it. Hopefully, people want to go out and support local orchards." 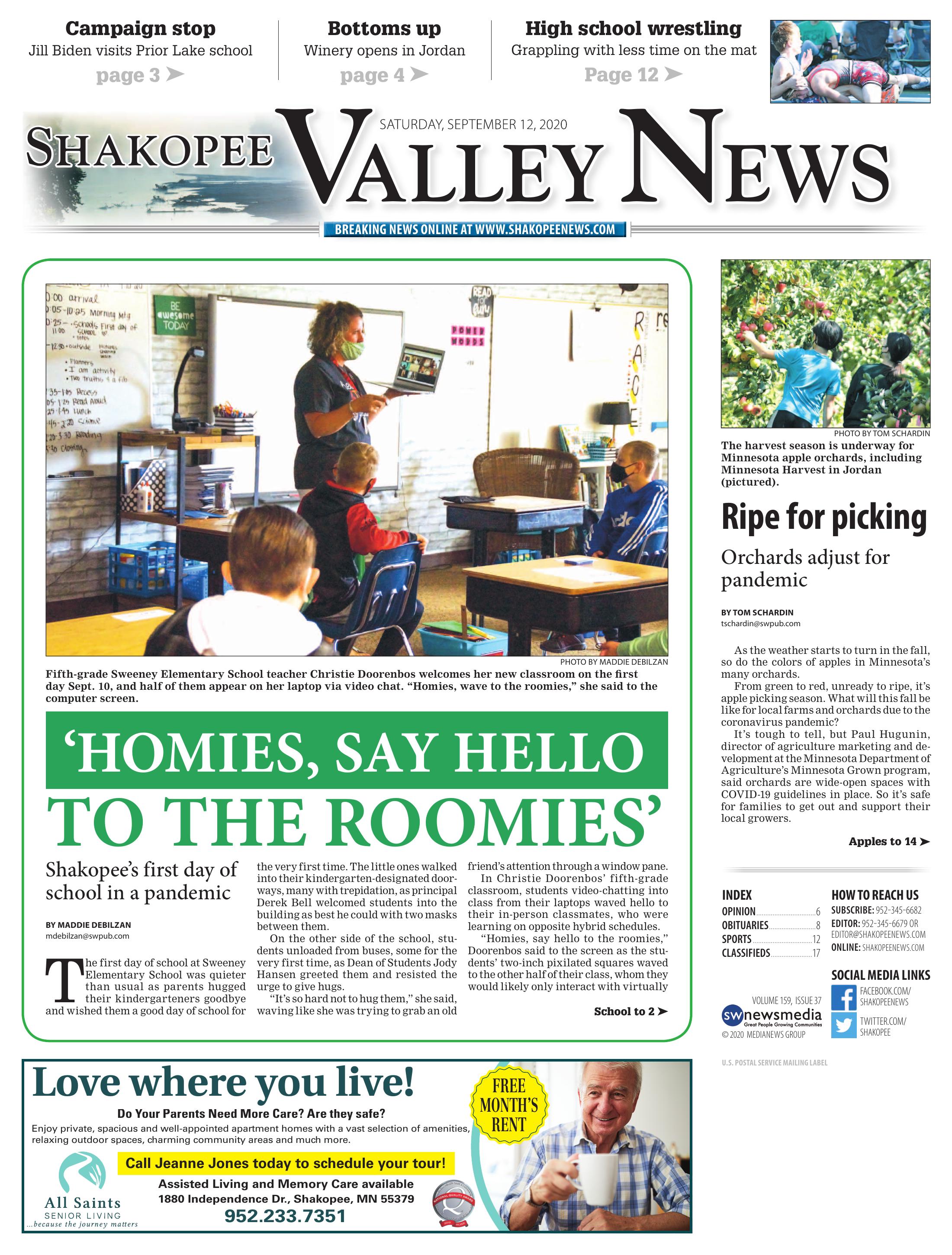