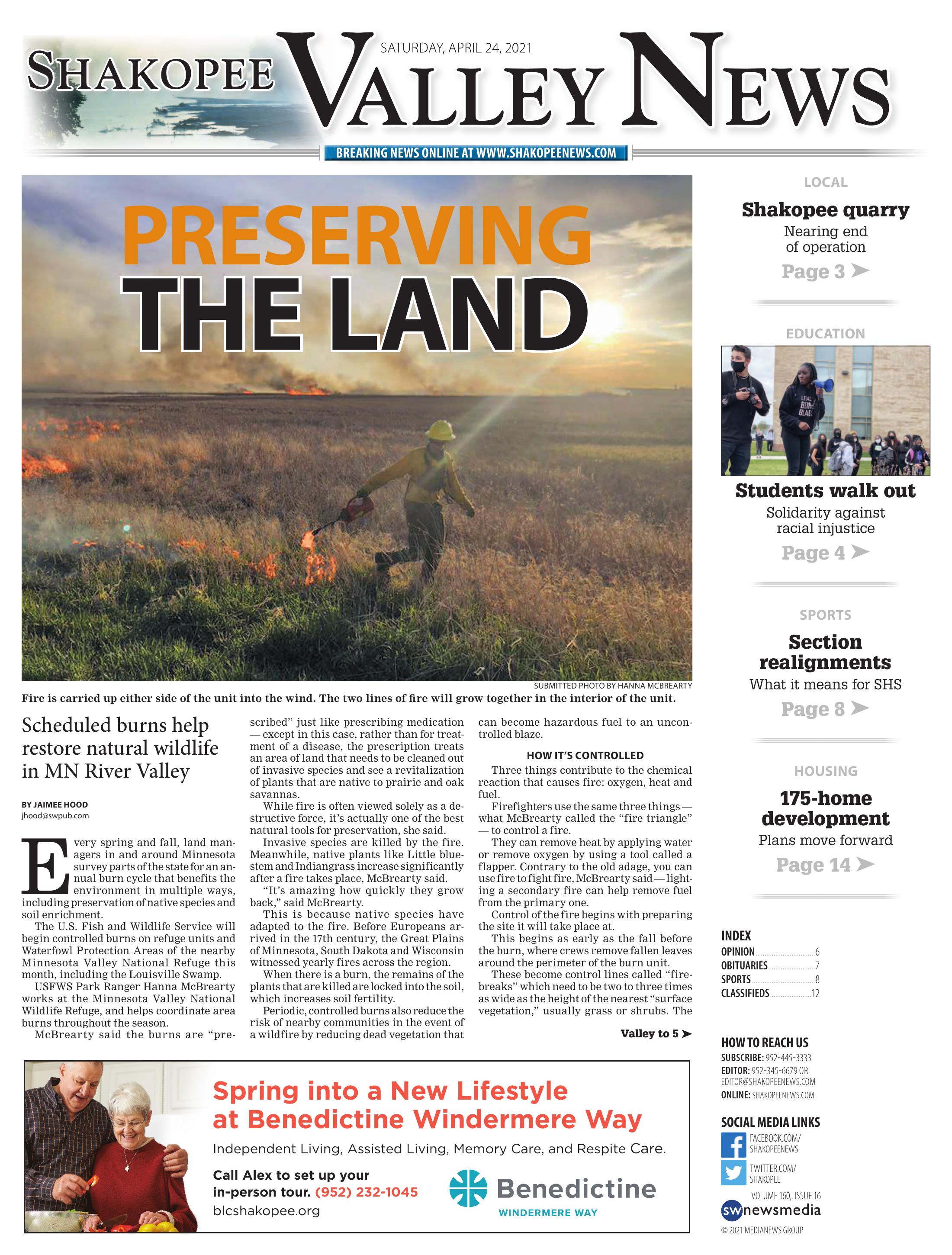 Fire is carried up either side of the unit into the wind. The two lines of fire will grow together in the interior of the unit.

Fire engine and firefighter holding line with water ready to spray if flames start to creep over the line.

Every spring and fall, land managers in and around Minnesota survey parts of the state for an annual burn cycle that benefits the environment in multiple ways, including preservation of native species and soil enrichment.

The U.S. Fish and Wildlife Service will begin controlled burns on refuge units and Waterfowl Protection Areas of the nearby Minnesota Valley National Refuge this month, including the Louisville Swamp.

McBrearty said the burns are “prescribed” just like prescribing medication — except in this case, rather than for treatment of a disease, the prescription treats an area of land that needs to be cleaned out of invasive species and see a revitalization of plants that are native to prairie and oak savannas.

While fire is often viewed solely as a destructive force, it’s actually one of the best natural tools for preservation, she said.

“It’s amazing how quickly they grow back,” said McBrearty.

This is because native species have adapted to the fire. Before Europeans arrived in the 17th century, the Great Plains of Minnesota, South Dakota and Wisconsin witnessed yearly fires across the region.

When there is a burn, the remains of the plants that are killed are locked into the soil, which increases soil fertility.

Periodic, controlled burns also reduce the risk of nearby communities in the event of a wildfire by reducing dead vegetation that can become hazardous fuel to an uncontrolled blaze.

Firefighters use the same three things — what McBrearty called the “fire triangle” — to control a fire.

They can remove heat by applying water or remove oxygen by using a tool called a flapper. Contrary to the old adage, you can use fire to fight fire, McBrearty said — lighting a secondary fire can help remove fuel from the primary one.

Control of the fire begins with preparing the site it will take place at.

This begins as early as the fall before the burn, where crews remove fallen leaves around the perimeter of the burn unit.

These become control lines called “firebreaks” which need to be two to three times as wide as the height of the nearest “surface vegetation,” usually grass or shrubs. The lack of flammable material in these control lines prevents fire from spreading through them.

Often a burn will start with a fire lit on the downwind side of the burn site, a “backing fire.”

The backing fire moves slowly against the wind as crews monitor it and begin watering part of the control line. This creates an even deeper control zone, McBrearty said. It’s considered “black” when the vegetation has turned to ash.

If it smolders, firefighters can use a tool called a flapper to deprive the fire of oxygen.

Then, fire personnel light along either side of the unit parallel to the wind direction, and the two fires grow together in the interior of the unit.

The upwind section is then lit, which is spurred by the wind into the black, where the fire will extinguish itself, having no fuel left to burn.

Crews have engines and UTVs with water hoses standing by in case any flying embers escape. Any lingering hot spots near the perimeter are extinguished with water and flappers, said McBrearty.

Before a flame can be lit, numerous safety concerns have to be met in order to actually control the prescribed fire.

Weather conditions, which can be iffy around this time of year, are among the first of the considerations surrounding a fire.

“It’s highly weather contingent,” McBrearty said. “We don’t know until the day of or day before if there will be ideal conditions to have a burn.”

Factors including wind speed and direction, temperature, relative humidity and vegetation conditions are considered, as well as smoke dispersion and proximity of nearby buildings.

When a burn has been planned, local fire departments and dispatch are always notified.

McBrearty said this is done for two reasons — firstly, when people see smoke, they often call it in to their local fire department as a wildfire. Secondly, this measure ensures firefighters know when and where the fire will be taking place should something go wrong.

“Urban habitat is an important component of a healthy and productive ecosystem, and it takes many hands to conduct a burn safely, effectively, and efficiently,” said McBrearty.

Visitors can stay up to date on when burns will take place by following the Minnesota Valley National Wildlife Refuge Facebook page or website fws.gov/refuge/minnesota_valley.

Questions specific to prescribed burning by the Minnesota Valley Wildlife Refuge can also be sent to to hanna_mcbrearty@fws.gov. 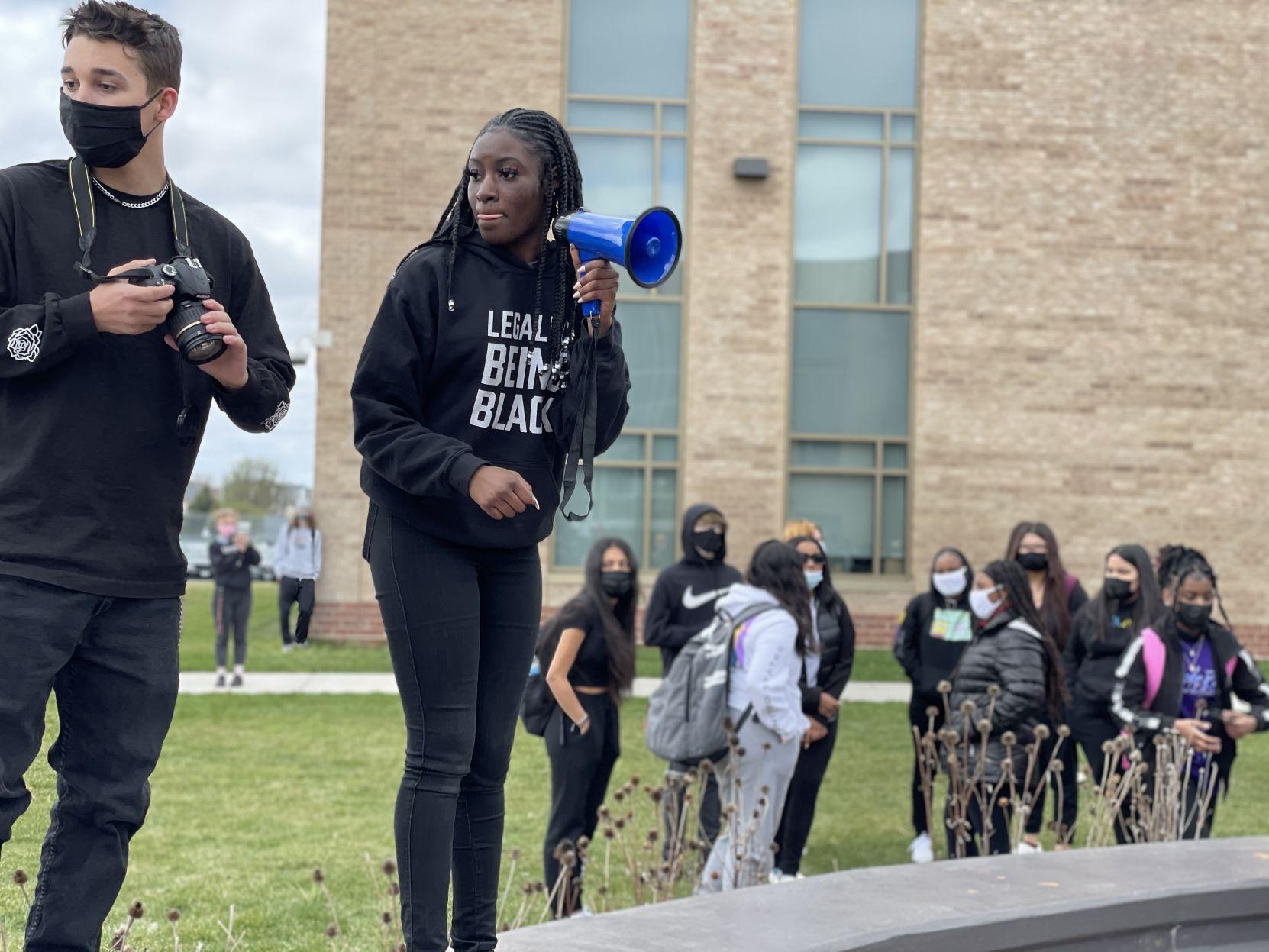 Shakopee High School student Eliana Ofori, right, led the April 20 walkout against racial injustice. “The system is corrupt, whether you like it or not,” Ofori yelled into the speakerphone. “And just because it doesn’t affect you doesn’t mean you don’t have the voice to change it. Get uncomfortable.”