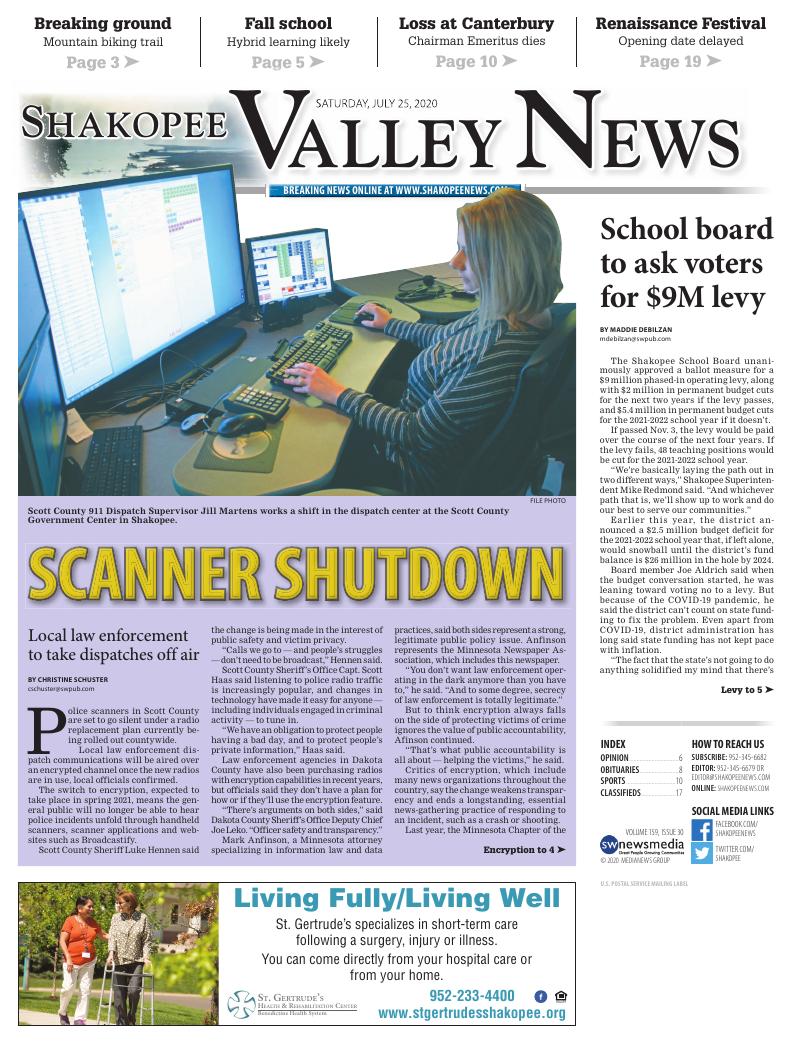 A Scott County 911 Dispatch supervisor works a shift in the dispatch center at the Scott County Government Center in Shakopee in 2018.

Local law enforcement dispatch communications will be aired over an encrypted channel once the new radios are in use, local officials confirmed.

The switch to encryption, expected to take place in spring 2021, means the general public will no longer be able to hear police incidents unfold through handheld scanners, scanner applications and websites such as Broadcastify.

Scott County Sheriff Luke Hennen said the change is being made in the interest of public safety and victim privacy.

“Calls we go to — and people’s struggles — don’t need to be broadcast,” Hennen said.

Scott County Sheriff’s Office Capt. Scott Haas said listening to police radio traffic is increasingly popular, and changes in technology have made it easy for anyone — including individuals engaged in criminal activity — to tune in.

Law enforcement agencies in Dakota County have also been purchasing radios with encryption capabilities in recent years, but officials said they don’t have a plan for how or if they’ll use the encryption feature.

But to think encryption always falls on the side of protecting victims of crime ignores the value of public accountability, Afinson continued.

“That’s what public accountability is all about — helping the victims,” he said.

Critics of encryption, which include many news organizations throughout the country, say the change weakens transparency and ends a longstanding, essential news-gathering practice of responding to an incident, such as a crash or shooting.

Last year, the Minnesota Chapter of the Society of Professional Journalists called on Hennepin County Sheriff Dave Hutchinson to reverse a decision to encrypt the police communications from all departments using the county’s dispatch services.

“Particularly with incidents that involve a police response, this transparency helps hold authorities accountable if something should go wrong — an essential part of building trust between law enforcement and the communities they serve,” Chris Snowbeck, the journalist organization’s president, wrote last year. “It also can help readers and viewers better understand the actions of law enforcement.”

Under the current radio system, not all 911 communications are publicly available. State law protects the public from hearing 911 callers, and Scott County’s current equipment keeps tactical operations off the air.

Officers involved with SWAT or drug task force operations already use encrypted radios, for example, but moving routine police calls to an encrypted channel is an “all or nothing” decision, Hennen said.

In recent years, each police department in Scott County has been replacing old radio equipment with equipment that offers encryption capability, but the switch to an encrypted channel won’t occur until every officer is ready.

After the switch, fire department calls throughout the county will remain accessible to the public on an open channel.

“The fire channel captures that, yet it doesn’t downplay our safety,” Hennen said.

Burnsville Police Capt. Don Stenger said Burnsville officers all have encryption technology on their radios these days, but the department doesn’t yet use it.

Tom Folie, executive director of the Dakota County Communications Center where the county’s emergency calls are dispatched, said he thinks encryption is desired in the long-term, but it’s probably two to three years away.

Shakopee Mayor Bill Mars at the groundbreaking for the Quarry Lake mountain biking trail in Shakopee, which will weave through neighboring property owned by Xcel Energy.

The Shakopee School Board approved a phased-in $9 million levy ask that would impact taxpayers for the next four years at its July 20 meeting.

If passed Nov. 3, the levy would be paid over the course of the next four years. If the levy fails, 48 teaching positions would be cut for the 2021-2022 school year.

“We’re basically laying the path out in two different ways,” Shakopee Superintendent Mike Redmond said. “And whichever path that is, we’ll show up to work and do our best to serve our communities.”

Earlier this year, the district announced a $2.5 million budget deficit for the 2021-2022 school year that, if left alone, would snowball until the district’s fund balance is $26 million in the hole by 2024.

Board member Joe Aldrich said when the budget conversation started, he was leaning toward voting no to a levy. But because of the COVID-19 pandemic, he said the district can’t count on state funding to fix the problem. Even apart from COVID-19, district administration has long said state funding has not kept pace with inflation.

“The fact that the state’s not going to do anything solidified my mind that there’s nothing else we can do,” Aldrich said. “We need to take action because we can’t trust that the state is going to be able to do anything in the next three to five years because of COVID. We can’t count on anybody but ourselves here.”

Regardless whether the levy passes or not, the district will trim $450,000 for the 2020-2021 school year by not filling five open non-teaching positions next year. It will also trim its non-payroll budgets, like the district-wide supply budget and the staff development fund.

For the 2021-2022 school year, $1.6 million in cuts will largely affect district administration, paraprofessionals and learning coaches. Those cuts will include a Shakopee High School assistant principal position, seven digital learning and instructional coaches, 10 paraprofessionals and a reduction of spending on Learning, Teaching and Equity, impacting at least 22 full-time-equivalent, non-teaching positions.

Another $90,000 in full-time equivalent positions will also be cut from the district’s superintendent office.

“It’s important to acknowledge that these do hurt,” board member Matt McKeand said. “Most of our money is spent on people. So this impacts people.”

“If we just make cuts, we’re ultimately hurting our students, which ultimately hurts our future,” board chair Kristi Peterson said before voting to put the levy on the ballot box. “And I just can’t do that.” 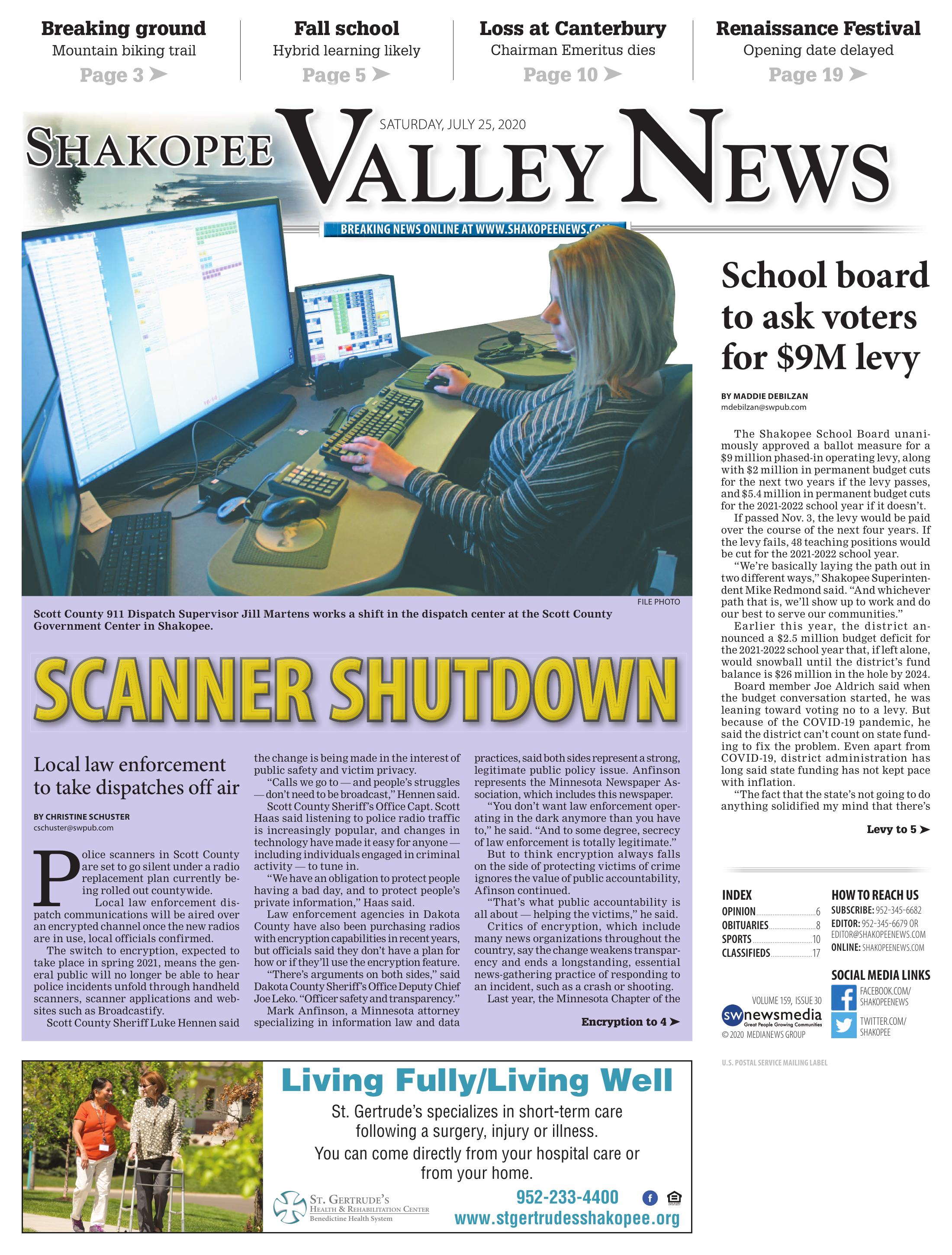