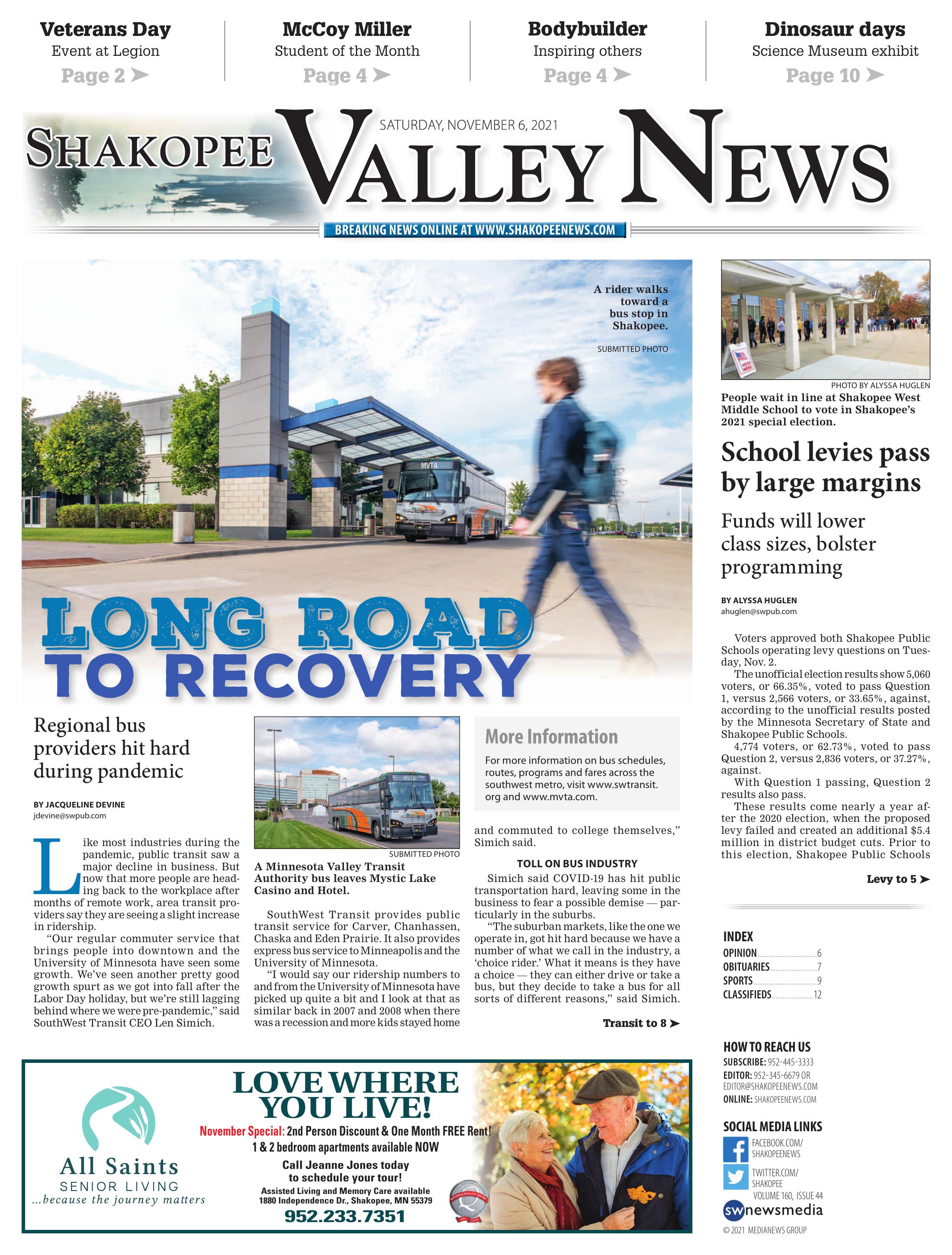 A rider walks toward a bus stop in Shakopee.

Like most industries during the pandemic, public transit saw a major decline in business. But now that more people are heading back to the workplace after months of remote work, area transit providers say they are seeing a slight increase in ridership.

“Our regular commuter service that brings people into downtown and the University of Minnesota have seen some growth. We’ve seen another pretty good growth spurt as we got into fall after the Labor Day holiday, but we’re still lagging behind where we were pre-pandemic,” said SouthWest Transit CEO Len Simich.

“I would say our ridership numbers to and from the University of Minnesota have picked up quite a bit and I look at that as similar back in 2007 and 2008 when there was a recession and more kids stayed home and commuted to college themselves,” Simich said.

TOLL ON BUS INDUSTRYSimich said COVID-19 has hit public transportation hard, leaving some in the business to fear a possible demise — particularly in the suburbs.

“The suburban markets, like the one we operate in, got hit hard because we have a number of what we call in the industry, a ‘choice rider.’ What it means is they have a choice — they can either drive or take a bus, but they decide to take a bus for all sorts of different reasons,” said Simich. “Whether it’s for less stress, to save some money or in many cases, they can get to their destination faster because we have advantages on the highway system. So, when people’s jobs got put on hold, or they were told to work from home, we lost all that market.”

Simich said he thinks it’s going to take some time to recover, but they are still expanding nonetheless.

“The major employers that utilize our services in downtown aren’t scheduled to come back until after the first of the year at the earliest, and even then, some of them are telling us they’re not going to be required to go to work five days a week,” he said. “I think it’s going to be a while to see that full recovery there.”

SouthWest Transit recently added new services like the “Grocery Getter” program and a Shakopee expansion allows for riders to travel from 6:30 a.m. to 6:30 p.m. for $4. The services operate much like a Lyft or Uber ride. People request rides online or by calling, and a vehicle meets them within 20 minutes. Riders are then notified when the bus arrives.

Richard Crawford, Minnesota Valley Transit Authority spokesman, said since the onset of COVID-19, MVTA and many other transit organizations nationwide experienced significant declines in ridership due in large part to many people working from home.

MVTA is the public transportation agency for seven suburbs located 15 miles south of Minneapolis and St. Paul, which include Savage, Prior Lake and Shakopee in Scott County, as well as Apple Valley, Burnsville, Eagan and Rosemount in Dakota County.

Nationally, transit ridership in 2020 dropped by 79% compared to 2019 levels at the start of the pandemic, Crawford said.

“As people begin to return to work, we have seen express ridership increase and there has been steady growth throughout summer and another jump in ridership after Labor Day,” said Crawford. “We added more trips to the University of Minnesota in September and ridership on Route 465, which serves the university, is currently MVTA’s highest ridership route.”

Both SouthWest Transit and MVTA have implemented health and safety protocols and continue to seek guidance from the Minnesota Department of Health and the Centers for Disease Control and Prevention.

“MVTA has adopted recommendations from the CDC on enhanced cleaning, sanitizing, and disinfecting procedures. Air filters are changed daily on the buses,” Crawford said.

“We’ve put in a very expensive air purification system in all our buses and stations and we have a cleaning protocol that’s second to none,” said Simich.

EVENT RIDERSHIPCrawford said MVTA Connect, a ride-on-demand microtransit service that currently serves Savage, Burnsville, Apple Valley and Rosemount, has been growing during the past year and has set ridership records in each of the past 12 months. Route 495, which runs between Shakopee, Savage, Burnsville and the Mall of America, also has been resilient and has ridership at about 75% of pre-COVID levels.

Crawford added that MVTA scaled back trips by more than 60% during the start of COVID to right-size its services to demand. As ridership has begun to increase, additional trips were added to meet demand.

“Although express ridership saw the most impact on ridership during the pandemic, local routes and new special service routes have experienced less impact,” said Crawford. “In 2021, MVTA offered connections for riders to attend the Twin Cities Summer Jam at Canterbury Park and the Renaissance Festival. More than 4,500 special service rides were provided in 2021.”

One event that saw a huge dip in attendance this year was the Minnesota State Fair which welcomed over 1 million people compared to over 2 million in previous years. It was the lowest attendance in 44 years.

“The first half of the fair it rained every day and top that with COVID, it would drive people inside a building where they were afraid to catch the virus,” he said. “So, people just stayed away. The third thing is the availability of parking. Because less people were going to the fair, there was more parking available in and around the fairgrounds.”

Crawford said MVTA’s ridership to the fair this year, like SouthWest Transit, was extremely low compared to previous years.

“State Fair ridership this year was 37,453,” said Crawford. “That number, as expected, was well below previous years.”

Simich said he hasn’t experienced driver shortages, but has had to furlough several employees.

“I have a lot of on-call senior drivers. For many of them this is not their career, it’s their second career and many of them are working part time. They’re not quite ready to retire yet, but those were the people who stepped up to be furloughed,” said Simich. “We lost about 12 individuals that didn’t come back once we started to bring them back. They just decided it was time to retire.”

Crawford acknowledges driver shortages from other bus services, but said MVTA luckily has not lost any.

“It’s a very competitive market for drivers throughout the transportation industry,” said Crawford. “MVTA is fortunate that we haven’t faced the driver shortages seen by other transit providers.”

NEED FOR TRANSITWith many people fearing a severe decline in public transit, Simich and Crawford are hopeful the service is still needed and encourage residents to utilize it more.

“Public transit does so many things. It gives access to jobs for people that may not have cars. You don’t have to worry about parking costs or long walks in the middle of winter. From that standpoint alone, it’s a huge economic driver,” said Simich.

“Every community that we’re working with are all looking at ways to make their areas more sustainable and part of that is getting people out of their cars,” he said. “We’re looking at things now like electric vehicles and anything we can do to reduce that carbon footprint.”

Crawford said while transit ridership, entertainment venues, restaurants and many other facets of the economy have been impacted by COVID-19, the bus industry expects improvement for all these areas as the pandemic fades.

"Although express ridership saw the most impact on ridership during the pandemic, local routes and new special service routes have experienced less impact."

For more information on bus schedules, routes, programs and fares across the southwest metro, visit www.swtransit.org and www.mvta.com.

The unofficial election results show 5,060 voters, or 66.35%, voted to pass Question 1, versus 2,566 voters, or 33.65%, against, according to the unofficial results posted by the Minnesota Secretary of State and Shakopee Public Schools.

These results come nearly a year after the 2020 election, when the proposed levy failed and created an additional $5.4 million in district budget cuts. Prior to this election, Shakopee Public Schools was the only district in the metro area without a voter-approved operating levy in place.

School Board Vice Chair Judi Tomczik said some voters’ minds may have changed going into this year’s election after seeing the failed levy’s impact over the last year.

“To some degree, I think parents of students experienced the repercussions of not having sufficient funds, having larger class sizes and programs that weren’t available,” Tomczik said.

What will funds be used for? 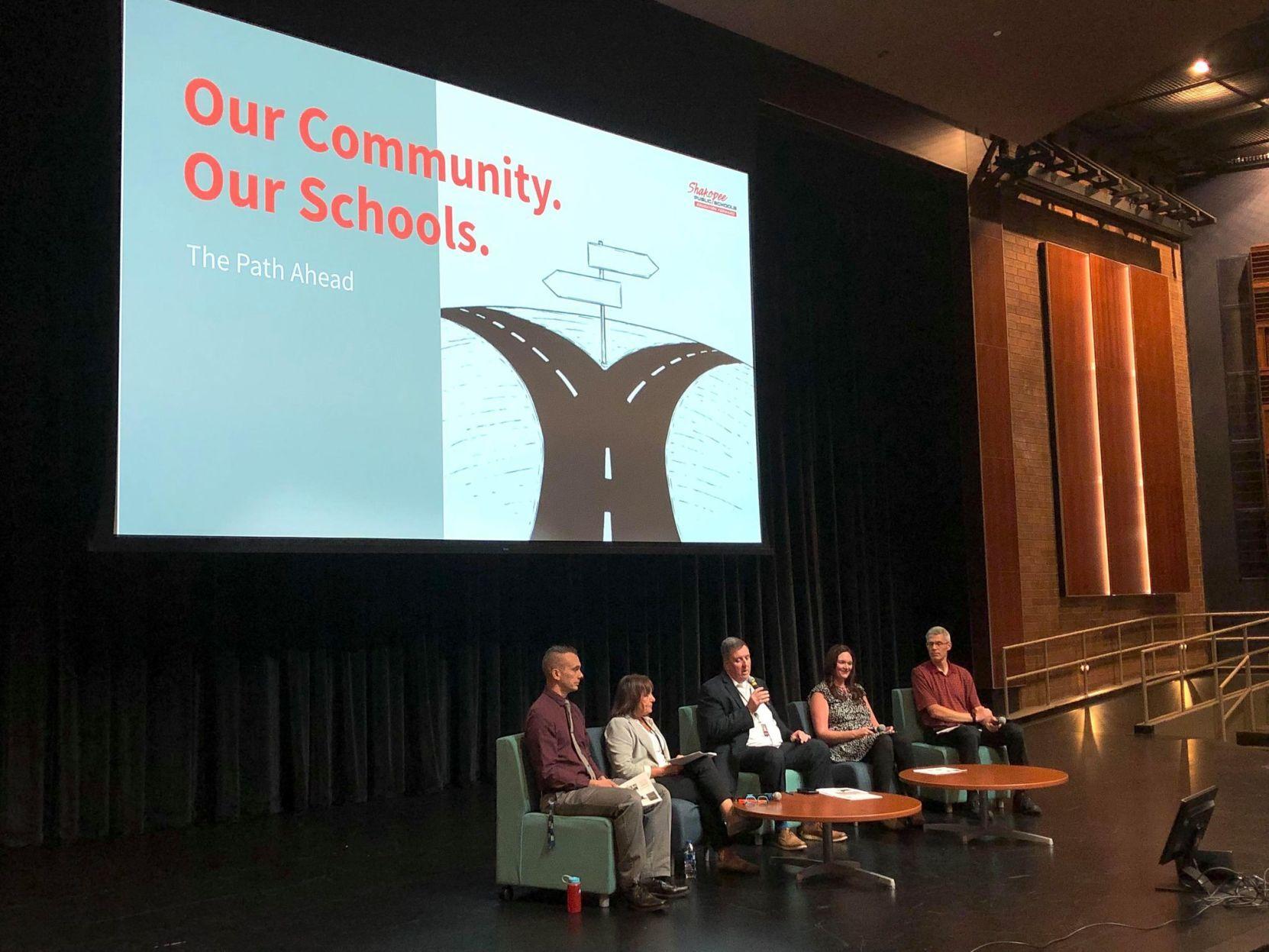 The school district held multiple community forums this year regarding the operating levy.

Question 1 passing will generate $7,537,951 in annual operating revenue. The district has said funds generated by Question 1 look to restore some of the $7.45 million in previous budget cuts and eliminate projected structural budget deficits.

Plans include restoring more than 43 teaching positions, two counselors and two paraprofessionals in the district. Class size numbers will also be reduced to what they were in the 2020-21 school year.

Funds generated from Question 1 will also help restore fifth-grade band, cover ACT testing fees and bring back the College in the Schools program.

Question 2 passing will generate an additional $3,481,655 for the district.

These funds will bolster fine arts and student activities, further improve class sizes, shorten walking distances for high school students and improve teacher and staff compensation, according to the district.

Shakopee School Board Chair Kristi Peterson said these restorations will provide more opportunities for the school district and community.

“With the additional support the community has now provided to the school district, it’s going to give us the ability to draw more people into our district and have them feel confident in the education students are receiving,” Peterson said.

When does the levy go into effect?

The levy will go on the tax rolls in the 2022 calendar year, according to district Director of Finance and Operations Bill Menozzi.

Operating revenue generated from the levy will be distributed to the school district in the 2022-23 fiscal year, beginning on July 1, 2022.

When distributed, the district will then be able to start using funds for its restoration and operation goals.

The district’s budget must be approved by the school board before the fiscal year begins. Menozzi said planning for the budget starts this winter.

The school board will canvass votes at 7 p.m. Thursday, Nov. 11 in the district board room, 1200 Shakopee Town Square, Shakopee. Canvassing will be open to the public.

Superintendent Dr. Mike Redmond said he and the district are appreciative of the community’s support and look forward to helping out the student body, school district and entire Shakopee community.

“We’re going to do everything we can to honor this support from the community … Shakopee cares about their kids and the future of our school district,” Redmond said.