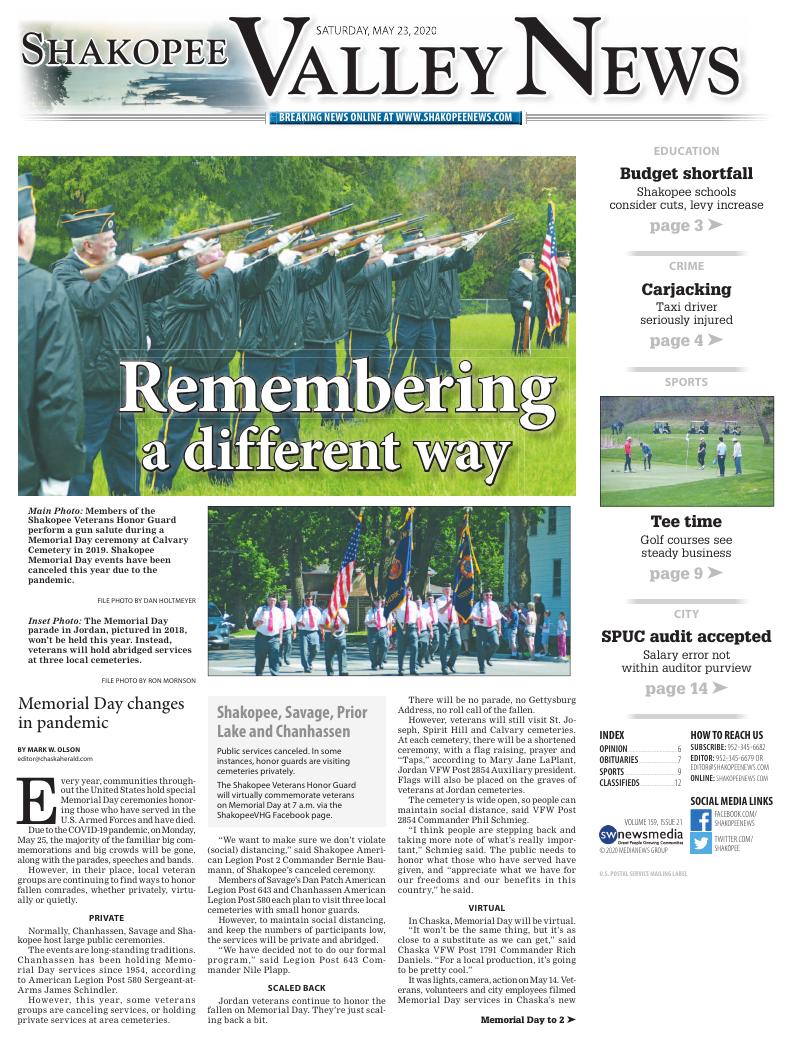 Members of the Shakopee Veterans Honor Guard perform a gun salute during a Memorial Day ceremony at Calvary Cemetery in 2019. Shakopee Memorial Day events have been canceled this year due to the pandemic.

Main Photo: Members of the Shakopee Veterans Honor Guard perform a gun salute during a Memorial Day ceremony at Calvary Cemetery in 2019. Shakopee Memorial Day events have been canceled this year due to the pandemic.Inset Photo: The Memorial Day parade in Jordan, pictured in 2018, won’t be held this year. Instead, veterans will hold abridged services at three local cemeteries.

A flag-raising is filmed at Veterans Park in Chaska for a virtual Memorial Day service.

Members of the VFW Post 1791 Honor Guard prepare to raise the flag while filming a virtual Veterans Day service.

Prior Lake resident and Vietnam veteran Rich Davidson, pictured, with four other volunteers, will once again be putting up hundreds of flags in local cemeteries.

Every year, communities throughout the United States hold special Memorial Day ceremonies honoring those who have served in the U.S. Armed Forces and have died.

Due to the COVID-19 pandemic, on Monday, May 25, the majority of the familiar big commemorations and big crowds will be gone, along with the parades, speeches and bands.

However, in their place, local veteran groups are continuing to find ways to honor fallen comrades, whether privately, virtually or quietly.

The events are long-standing traditions. Chanhassen has been holding Memorial Day services since 1954, according to American Legion Post 580 Sergeant-at-Arms James Schindler.

However, this year, some veterans groups are canceling services, or holding private services at area cemeteries.

However, to maintain social distancing, and keep the numbers of participants low, the services will be private and abridged.

“We have decided not to do our formal program,” said Legion Post 643 Commander Nile Plapp.

Jordan veterans continue to honor the fallen on Memorial Day. They’re just scaling back a bit.

There will be no parade, no Gettysburg Address, no roll call of the fallen.

However, veterans will still visit St. Joseph, Spirit Hill and Calvary cemeteries. At each cemetery, there will be a shortened ceremony, with a flag raising, prayer and “Taps,” according to Mary Jane LaPlant, Jordan VFW Post 2854 Auxiliary president. Flags will also be placed on the graves of veterans at Jordan cemeteries.

“I think people are stepping back and taking more note of what’s really important,” Schmieg said. The public needs to honor what those who have served have given, and “appreciate what we have for our freedoms and our benefits in this country,” he said.

In Chaska, Memorial Day will be virtual.

“It won’t be the same thing, but it’s as close to a substitute as we can get,” said Chaska VFW Post 1791 Commander Rich Daniels. “For a local production, it’s going to be pretty cool.”

It was lights, camera, action on May 14. Veterans, volunteers and city employees filmed Memorial Day services in Chaska’s new Veterans Park, to broadcast on Memorial Day via local cable and YouTube.

“What we want to do is make sure we’re honoring fallen veterans,” said American Legion Post 57 Commander Steve NaSalle. “The VFW and Legion are still here to serve the community.”

Like other cities, Prior Lake has canceled its large Memorial Day ceremony.

However one tradition continues.

Every year Rich and Darlene Davidson, with Frieda Barlage, Tom Moore and Tim Harper, install hundreds of flags in seven Prior Lake cemeteries.

They began helping Tony and Mildred Conry with the initiative in 1992, taking over the program in 2005.

Every year the crew, ages 71-87, spend 145 hours putting up 548 flags. The flags, and in many cases markers, honor veterans dating back to the Civil War, and members of the veteran auxiliaries.

The crews also need to put up hundreds of markers for the flags. To make sure they’re getting all the graves, Darlene keeps a database of 1,308 Prior Lake veterans and auxiliary members who have died, gleaned from obituaries and other reports. (Not all the veterans are buried in Prior Lake cemeteries.)

“With the virus and everything, we felt that this would be something that would be a real positive note,” Rich said.

At the end of the day, Rich said he can look at hundreds of flags flying in a cemetery. “It’s a heartwarming sight,” he said.

It’s also something American and spiritual, Rich said — something to look at and say, “We’re going to make it through this.”

Something new this year in downtown Prior Lake is the installation of 16 new banners honoring those currently in the U.S. Armed Services.

Mark and Dawn Kes “were the foundation of the program,” which began several months ago with assistance from the city, said Prior Lake VFW Post 6208 Senior Vice Commandeer Dave Thompson.

Memorial Day is about honoring those who have paid the ultimate sacrifice, Thompson said. He said he hopes those passing the banners will “have a chance to think about those who’ve gone before, and thank those currently serving.”

The banners will hang in downtown Prior Lake until Labor Day, and then be presented to the families, Thompson said. The plan for future years is to also honor past members of the military.

Despite the lack of public celebrations, veteran group leaders note the public honor the fallen in other ways.

Commander Plapp recalls a family who visited a cemetery last year. “They had a tape recorder that had a bugle playing ‘Taps,’ and stood around and put flowers down and everyone said a bit,” Plapp said.

Chanhassen Legion 580 Commander Glenn Anderson recommended putting up a flag or calling a veteran to lift their spirit.

“Besides remembering those we lost, a lot of veterans are stuck at home. Give them a call and tell them ‘Thank you for your service,’” Daniels said.

“It’s a good time to reflect on our values,” said Commander Schmieg. “We go through hard times. But this is a great country to live in, and it is because of the sacrifice of the men and women that have served before us and we need to honor them.”

Daniels, a Vietnam War veteran who has lost friends and family in combat, plans to visit Chaska’s Veterans Park on Memorial Day and reflect.

Shakopee, Savage, Prior Lake and Chanhassen

The Shakopee Veterans Honor Guard will virtually commemorate veterans on Memorial Day at 7 a.m. via the ShakopeeVHG Facebook page.

The virtual Memorial Day ceremony will be broadcast on Comcast Channel 14 and posted on the Chaska Community Television YouTube channel at 10 a.m. Monday. 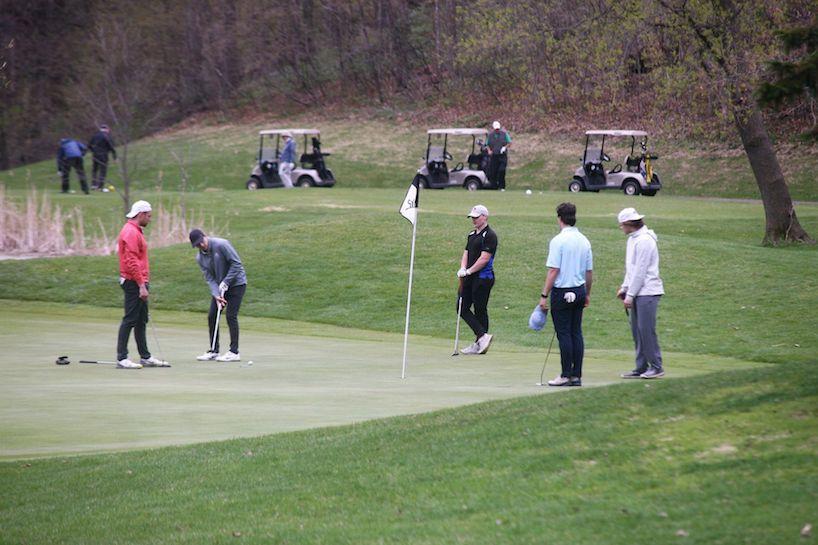 Golf courses in Minnesota were able to open for business April 18, but with some restrictions due to the coronavirus pandemic. 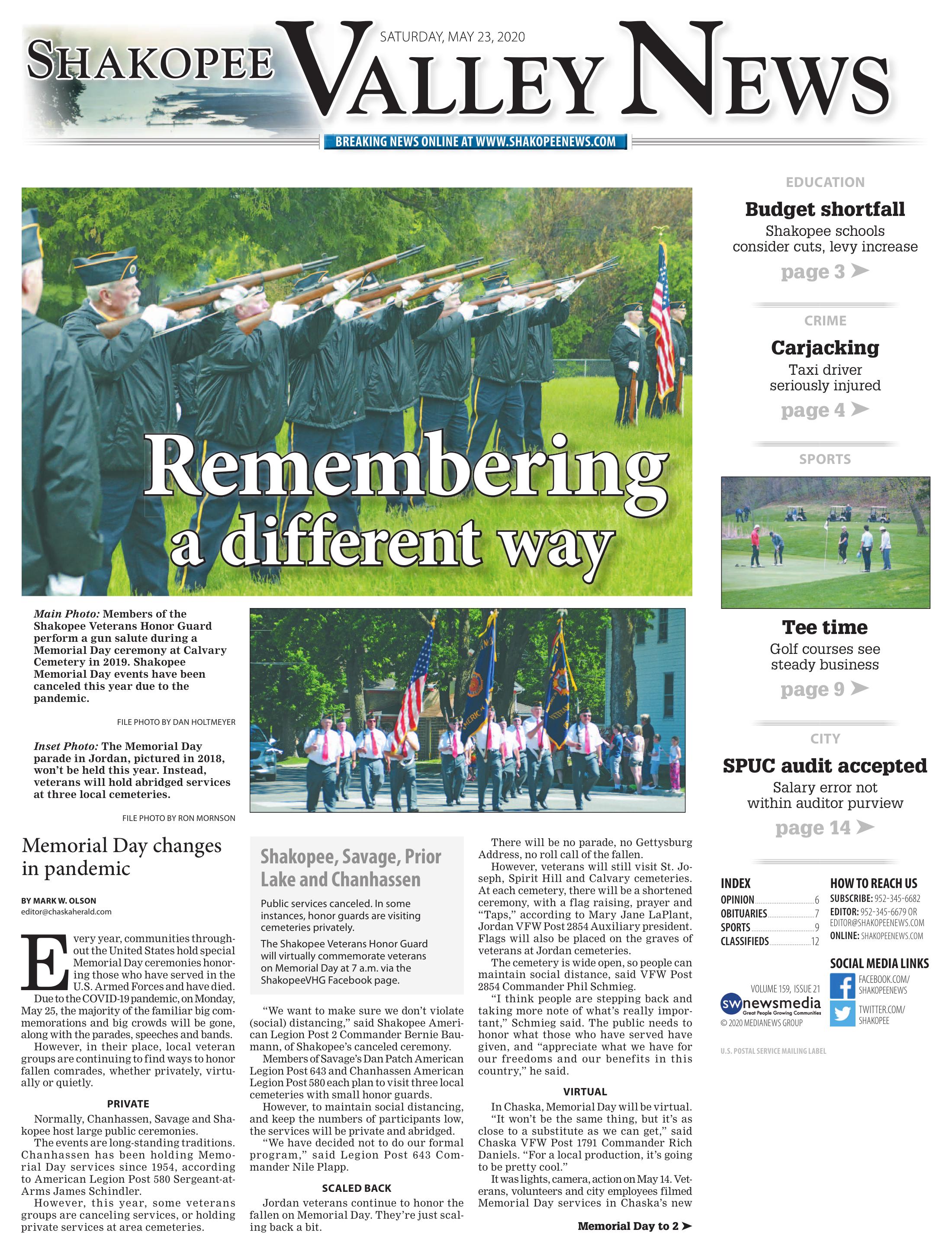