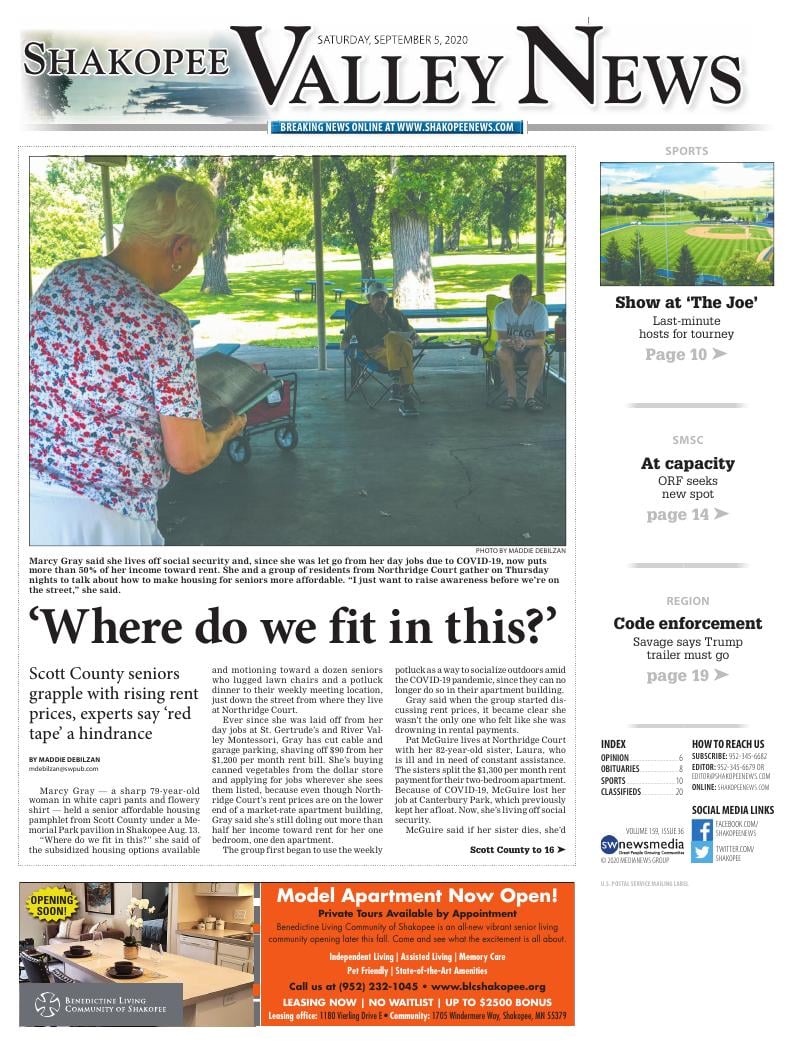 Marcy Gray said she lives off social security and, since she was let go from her day jobs due to COVID-19, now puts more than 50% of her income toward rent. She and a group of residents from Northridge Court gather on Thursday nights to talk about how to make housing for seniors more affordable. “I just want to raise awareness before we’re on the street,” she said.

Residents who live at Northridge Court in Shakopee, an apartment building owned by the Scott County Community Development Agency, say rent is becoming too difficult to afford. Northridge is one of the most affordable facilities in the area for those who earn too much money to qualify for housing subsidies.

Marcy Gray said she lives off social security and, since she was let go from her day jobs due to COVID-19, now puts more than 50% of her income toward rent. She and a group of residents from Northridge Court gather on Thursday nights to talk about how to make housing for seniors more affordable. “I just want to raise awareness before we’re on the street,” she said.

“Where do we fit in this?” she said of the subsidized housing options available and motioning toward a dozen seniors who lugged lawn chairs and a potluck dinner to their weekly meeting location, just down the street from where they live at Northridge Court.

Ever since she was laid off from her day jobs at St. Gertrude’s and River Valley Montessori, Gray has cut cable and garage parking, shaving off $90 from her $1,200 per month rent bill. She’s buying canned vegetables from the dollar store and applying for jobs wherever she sees them listed, because even though Northridge Court’s rent prices are on the lower end of a market-rate apartment building, Gray said she’s still doling out more than half her income toward rent for her one bedroom, one den apartment.

The group first began to use the weekly potluck as a way to socialize outdoors amid the COVID-19 pandemic, since they can no longer do so in their apartment building.

Gray said when the group started discussing rent prices, it became clear she wasn’t the only one who felt like she was drowning in rental payments.

Pat McGuire lives at Northridge Court with her 82-year-old sister, Laura, who is ill and in need of constant assistance. The sisters split the $1,300 per month rent payment for their two-bedroom apartment. Because of COVID-19, McGuire lost her job at Canterbury Park, which previously kept her afloat. Now, she's living off social security.

McGuire said if her sister passes away, she’d have to leave Northridge. She said she couldn’t afford to pay the rent on her own.

"If they think we can live off social security, they’re nuts."

Several other residents nodded in understanding, noting they are in similar situations.

“This is our family. It’s where we live. None of us want to leave,” McGuire said, adding she didn’t qualify for housing assistance because she had too much money in her savings account, which she doesn’t want to pull from to pay for rent.

“We’ve worked our whole lives and have some savings. But what if we get sick? Then it’s all gone.”

Northridge Court in Shakopee is one of eight similar properties owned by the Scott County Community Development Agency and managed by Great Lakes Management. The CDA-owned apartment buildings designated for seniors are considered market-rate, but rent prices are significantly lower than comparable properties, since the county is not in the business of making money off the properties.

Northridge Court, for example, charges $1.29 per square foot. Comparable apartment buildings such as Riva Ridge and Heritage Park in Shakopee charge between $1.35 and $1.54 per square foot.

Rent at Northridge Court rises between 2 and 3% each year, according to Great Lakes Management. The cost of living adjustment for social security, according to the Social Security Administration, was 1.6% this year.

For 2021, Senior Director of Property Management for Great Lakes Management Lorien Mueller said management is looking into implementing a 1.5% rent increase to accommodate the challenges residents are facing due to COVID-19.

Mueller added CDA-owned properties are doing all they can to keep rent prices down, especially in light of the pandemic. In fact, residents who don’t qualify for subsidy programs would be hard-pressed to find market-rate apartment buildings at rent prices this low, she said.

“When we set rental rates, we don’t set those based on the true market,” Meuller said. “We’re looking for the rent that falls above the tax credit communities and at the bottom end of the traditional market-rate communities.”

Landlords in the interest of affordable market-rate apartments, like the CDA, aren’t swimming in enough cash to dole out more housing assistance vouchers or reduce their rent prices, Mueller said. Great Lakes Management has bills to pay, too.

“These properties have to be as self-sustaining as possible. We need to make sure rents are still affordable, that we’re not implementing huge rent increases, but our costs have gone up,” Mueller said. “We’ve had 300% increases in the cost of cleaning supplies. Gloves for staff have increased 150%. So we’re looking at mitigating some of the costs.”

Meuller said Great Lakes Management has collected all rents for August and that of the eight properties it manages in Scott County, she can recall only one case of a late rent payment due to COVID-19 and job status.

For seniors in Scott County who are interested in renting an apartment at 30% or less of their income — which is the threshold that is considered “affordable,” there aren’t many options.

Applicants at Schule Haus, a senior living community in Jordan, have to qualify for Section 8 housing and be at least 62 years old or have a disability. The building has 52 units and a waiting list that’s just as large. Only one or two units open up annually.

The CDA owns 478 units in Scott County across its eight apartment buildings, with more than 300 people on the waiting lists. The newest development — Brentwood Terrace in Jordan — is expected to break ground in November and is already at 59% of its pre-leasing capacity.

According to a 2016 Scott County housing study, about 57% of senior renters in the county are cost-burdened.

A housing study completed by research and consulting business Maxfield offers one caveat: seniors living off social security or meager incomes often have more money in savings. The study noted that “most seniors allocate the equity from their single‐family home and other savings to pay for senior housing with services. Thus, seniors with lower incomes can often afford market rate senior housing.”

Most of the seniors from Northridge Court who gathered to meet at Memorial Park were in this position: they had savings set aside from sold homes or their previous jobs, disqualifying them from any programs that might give them rent subsidies and causing them to pull from their life savings to pay for rent.

Sandy Coleman, a senior at Northridge Court, said when she was in the market four years ago, she looked at 20 apartment buildings before deciding on Northridge for its prices. She said she didn’t qualify for subsidized housing.

“I have savings, but I don’t want to take out of that every month,” Coleman said.

The senior population in Minnesota is expected to grow 200% by 2035. That means there is demand for 3,697 senior units by 2040, according to a 2016 Scott County housing study. CDA Housing Director Julie Siegert said this issue isn’t unique to Scott County.

According to the county, as of the beginning of July, there are three seniors in Scott County currently awaiting a referral for coordinated entry, which is a process developed to help those experiencing homelessness. And Scott County’s Family Homeless Prevention Assistance Provider has served 12 senior households within the last year.

The CDA-owned properties help keep rent prices down despite the high demand for senior housing units.

“In a true market rate community that’s not owned by the CDA, they’d say, I’ve got a waiting list of 50 folks; let’s raise rents,” Mueller with Great Lakes Management said. “Even though we could raise rent 5, 6, 7%, we’re not.”

While Northridge Court and all of its sister properties accept Section 8 vouchers, seniors who want to get on the voucher won’t have any luck due to a lack of federal funding, Siegert said.

“We haven’t opened the (Section 8) waiting list since 2007, because it’s so full and there haven't been new resources,” Siegert said.

At a Sept. 1 senior housing roundtable with U.S. House Rep. Angie Craig, who represents all of Scott County, area experts who work with seniors said housing and affordability for seniors hinges largely upon “red tape.”

Tara Peterson, a resident service coordinator from DARTS, a local nonprofit that offers services for seniors, said she has residents in her building who are falling through the cracks due to technicalities, like a lack of access to technology, which makes it difficult to navigate obstacles regarding their social security and COVID-19 stimulus payments.

“I have individuals in my building who hold PhDs. Who are retired nurses and physicians. These are highly accomplished people. They’re not people who have lived off the system their whole life, but they didn’t have the retirement they needed because the economy crashed,” Peterson said.

“These projects from beginning to end can take us years, and a lot of that is navigating through the red tape,” Hall said.

Tyler Kistner, who is running against Craig for the 2nd Congressional District seat, said if elected, he would "work diligently with members of both parties to deliver bipartisan solutions that ensure that affordable housing is available to members of our community." 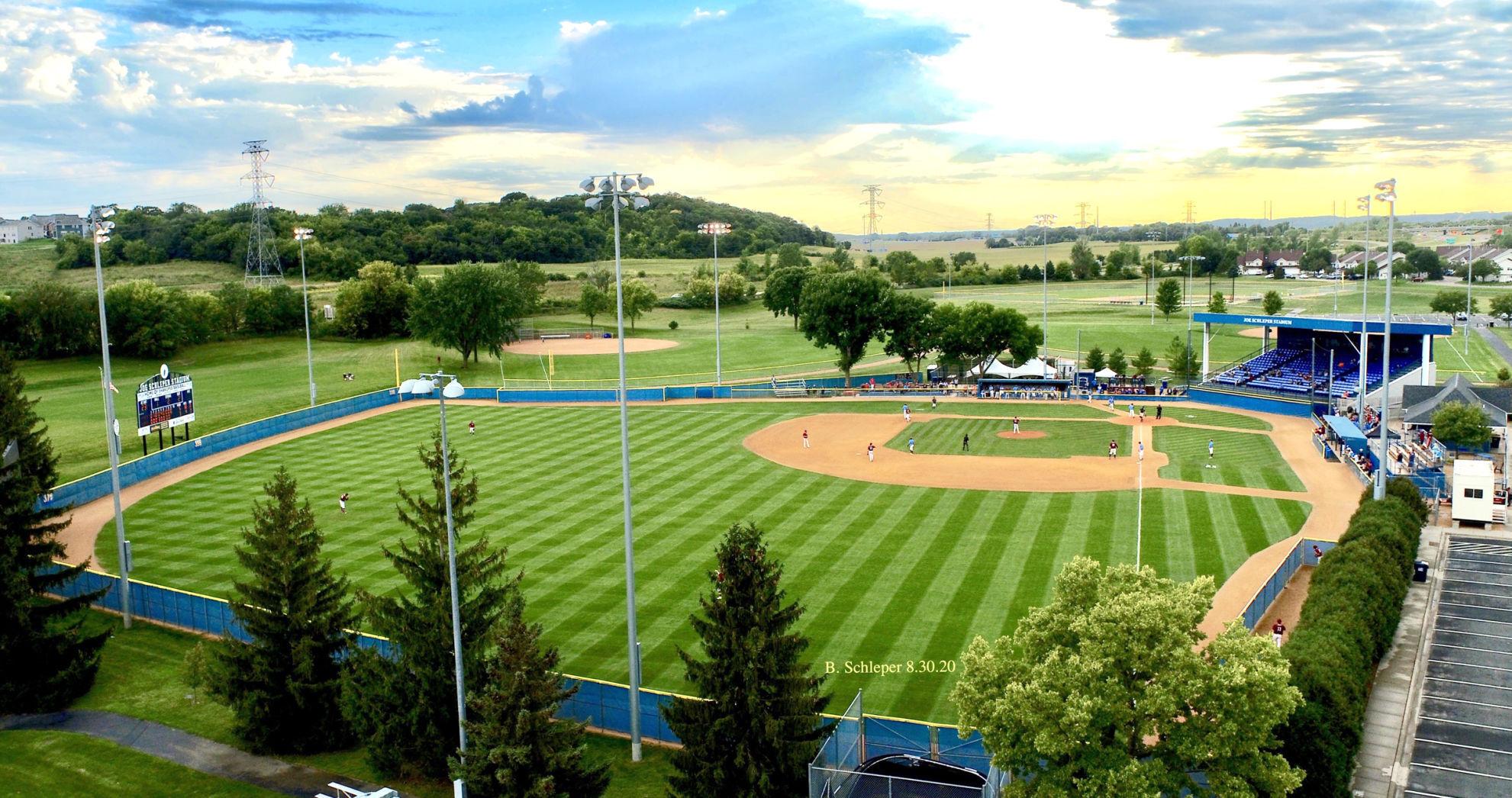 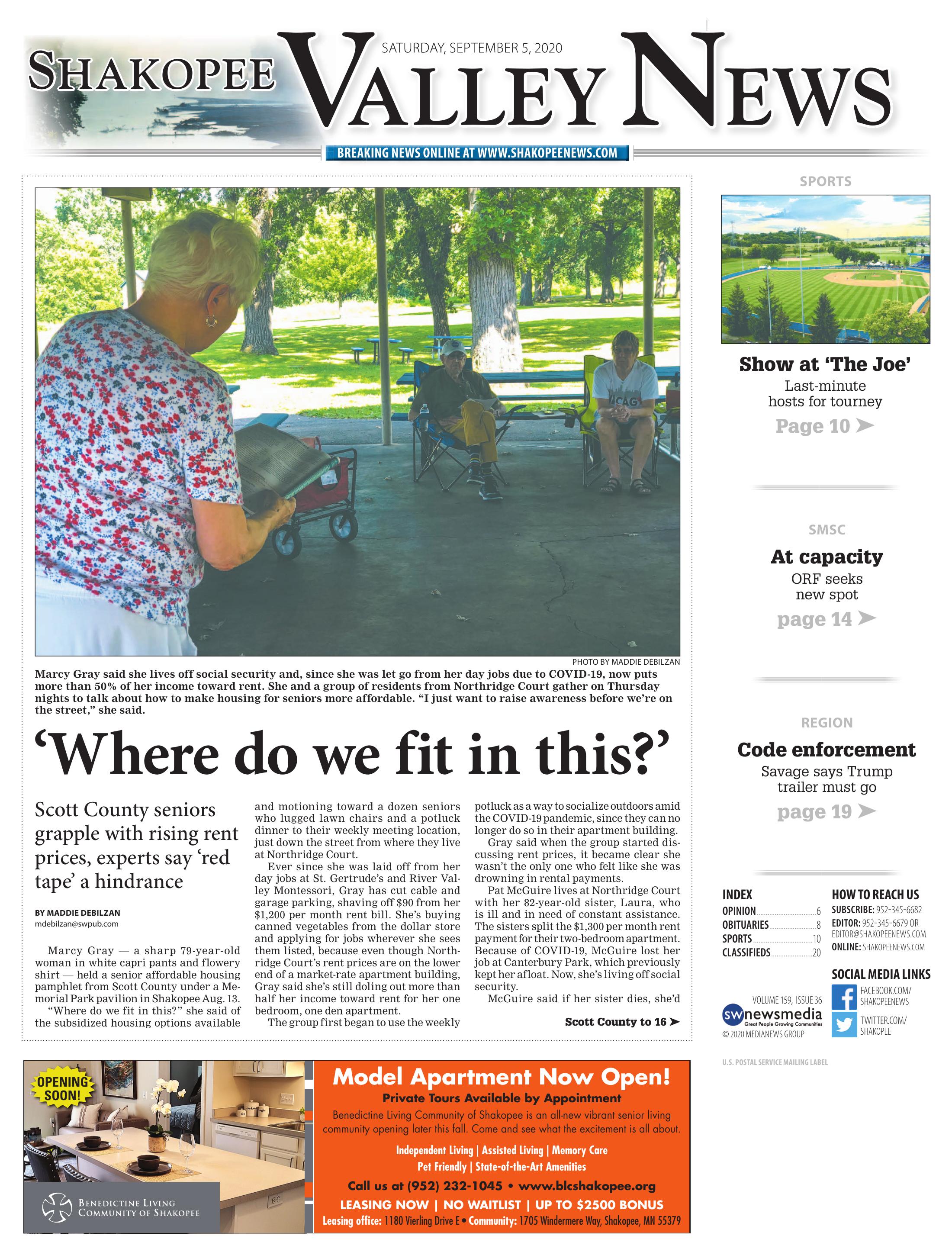