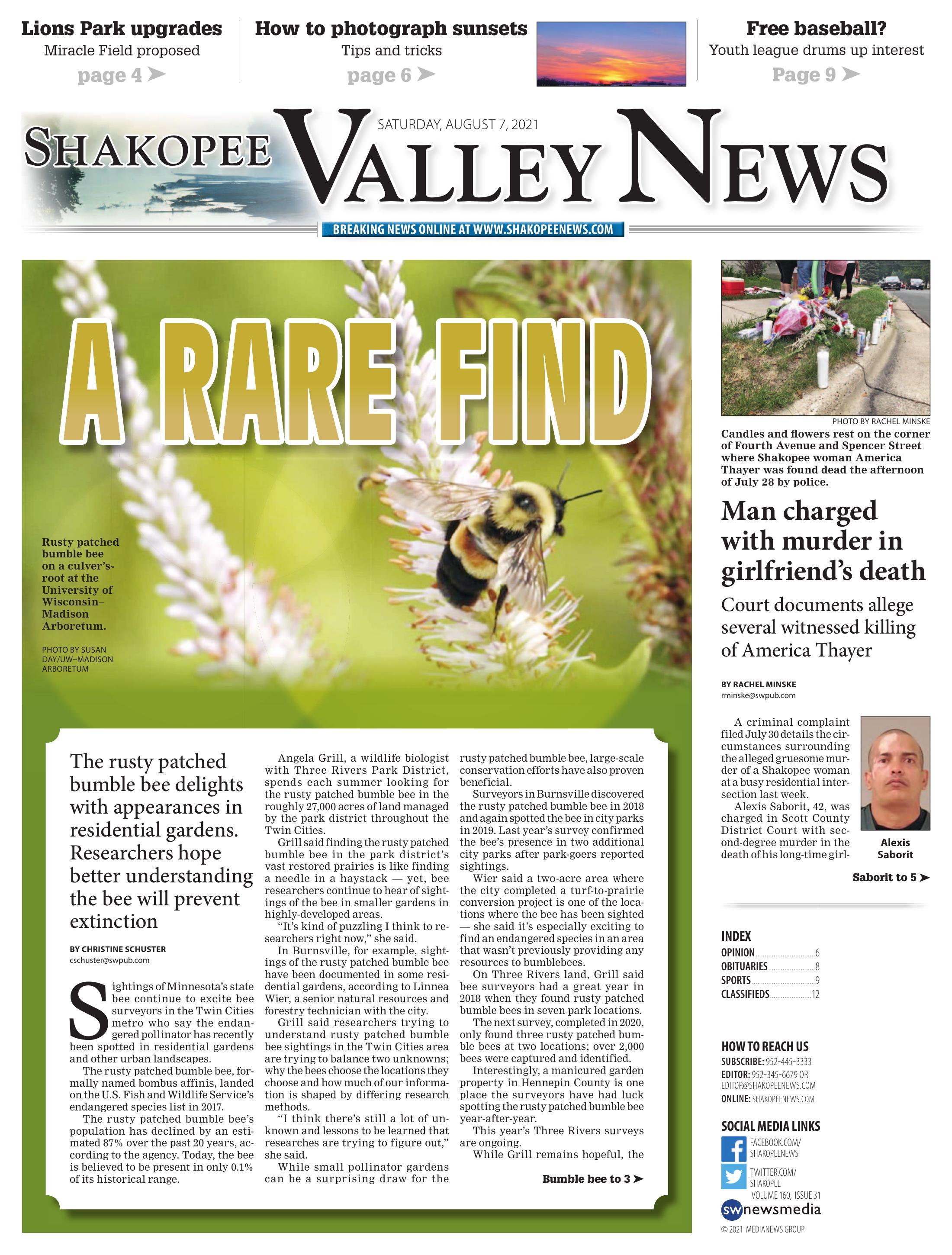 Rusty patched bumble bee on a Culver’s root at the University of Wisconsin–Madison Arboretum.

A rusty patched bumble bee on a wild bergamot flower.

Sightings of Minnesota’s state bee continue to excite bee surveyors in the Twin Cities metro who say the endangered pollinator has recently been spotted in residential gardens and other urban landscapes.

The rusty patched bumble bee’s population has declined by an estimated 87% over the past 20 years, according to the agency. Today, the bee is believed to be present in only 0.1% of its historical range.

Angela Grill, a wildlife biologist with Three Rivers Park District, spends each summer looking for the rusty patched bumble bee in the roughly 27,000 acres of land managed by the park district throughout the Twin Cities.

Grill said finding the rusty patched bumble bee in the park district’s vast restored prairies is like finding a needle in a haystack — yet, bee researchers continue to hear of sightings of the bee in smaller gardens in highly-developed areas.

“It’s kind of puzzling I think to researchers right now,” she said.

In Burnsville, for example, sightings of the rusty patched bumble bee have been documented in some residential gardens, according to Linnea Wier, a senior natural resources and forestry technician with the city.

Grill said researchers trying to understand rusty patched bumble bee sightings in the Twin Cities area are trying to balance two unknowns; why the bees choose the locations they choose and how much of our information is shaped by differing research methods.

“I think there’s still a lot of unknown and lessons to be learned that researches are trying to figure out,” she said.

While small pollinator gardens can be a surprising draw for the rusty patched bumble bee, large-scale conservation efforts have also proven beneficial.

Wier said a two-acre area where the city completed a turf-to-prairie conversion project is one of the locations where the bee has been sighted — she said it’s especially exciting to find an endangered species in an area that wasn’t previously providing any resources to bumblebees.

The next survey, completed in 2020, only found three rusty patched bumble bees at two locations; over 2,000 bees were captured and identified.

Interestingly, a manicured garden property in Hennepin County is one place the surveyors have had luck spotting the rusty patched bumble bee year-after-year.

While Grill remains hopeful, the threat of extinction facing the bees is always close at mind.

Grill said the decline of the rusty patched bumble bee is driven by more factors than just habitat loss, but researchers have very few opportunities to observe the bees and their nesting sites.

“They are at such low numbers that even doing research on them is extremely difficult,” she said.

Insecticide and pesticide use in agricultural areas could explain the push of these pollinators towards the metro, she said. Other factors affecting their populations are thought to be diseases and climate change.

Despite the challenges of bee research, the observations of average citizens can make an important difference.

Last year, a Minnesota resident who spotted a rusty patched bumble bee nest at their residence helped University of Minnesota researchers observe the bee’s nesting behaviors for the first time in over 25 years.

Apps, such as iNaturalist and Bumble Bee Watch, can help citizen scientists report their findings to the experts by uploading photos. Grill said iNaturalist photos captured at a Three Rivers property, for example, are sent to her for review.

But patience might be the key for bee enthusiasts hoping to spot the rusty patched.

But, with documented sightings in Burnsville, Allen said he believes they are probably also in Savage.

“It’s just a matter of being fortunate enough to observe them,” he said.

Heather Holm, a Minnesota biologist, pollinator conservationist and author, says the rusty-patched bumble bee can be observed by people who are looking for them in the metro — and backyard habitats play an important role.

During a workshop with Burnsville residents this month, Holm said the way to support bumble bees in a home garden is by ensuring pollen and nectar resources are available to pollinators throughout the growing season.

Avoiding pesticides by building a tolerance for your garden’s imperfections is also key, she said.

For early spring, Holm recommends native perennials such as Dutchman’s breeches, bluestar, waterleaf and American bladdernut to provide adequate nutrition for bumble bees that’ve emerged from their hibernicula after a long winter.

During this critical period, the queens need fuel as they look for a place to nest.

At the end of the season, goldenrod, blazing star, Joe-Pye weed and wild bergamot help bees build up their fat storage before hibernation.

Local residents working with a smaller space, such as an apartment deck, can also support pollinators.

Holm said native perennials can last around three to four years in large containers, and single-flower annuals — such as cosmos and zinnias — are also beneficial. 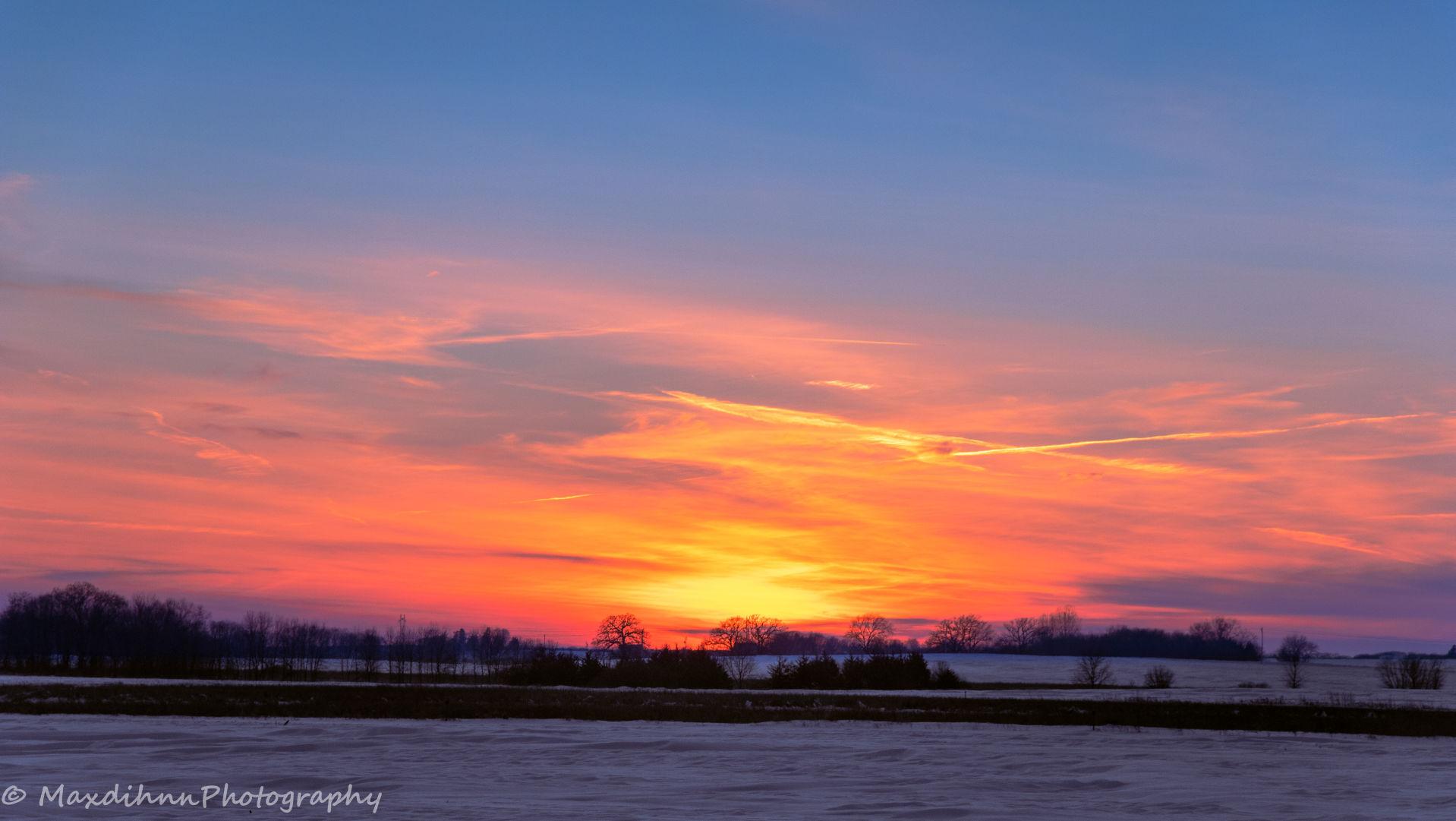 Candles and flowers rest on the corner of Fourth Avenue and Spencer Street where Shakopee woman America Thayer was found dead the afternoon of July 28 by police. 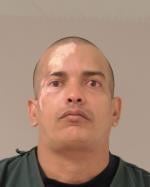 Alexis Saborit, 42, was charged in Scott County District Court with second-degree murder in the death of his long-time girlfriend, 55-year-old America Thayer.

Thayer’s decapitated body was found near Fourth Avenue and Spencer Street at 2:31 p.m. July 28 in Shakopee. Officers had been called to the area, following a report of a man who had allegedly thrown a headless body out of a vehicle.

Officers found an empty, black sheath that appeared to be for a machete-style knife in the grass near the intersection. In an alleyway about one-and-a-half blocks away, officers found a white shirt, white shoes and knife in a recycling bin. The clothing appeared to have a “blood-like substance” on them.

Police spotted Saborit near Shenandoah Parkway and Highway 101. He was eventually arrested in the parking lot of The Landing historical village, two miles from where Thayer’s body was found.

On July 29, a witness called police to report her dog had found a knife in a garden near Spencer Street and Fourth Avenue. The knife, which was nearly concealed, appeared to have been plunged in the dirt, court documents said. The knife appeared to fit the sheath found at the crime scene.

One witness said he was with Thayer and Saborit at Memorial Park at 2:15 p.m. that day. The witness told police Thayer was trying to convince Saborit to go to court so he would not get in trouble. Thayer was upset that Saborit may get into trouble for missing court, but things seemed fine between the two of them, said the witness, who added Saborit often carries a machete on him.

Saborit told investigators that he’d been dating Thayer for several years and had been at the park earlier that day. He allegedly said they were going to his court appearance together, and on the way to court, Thayer told him she wanted to end the relationship. Saborit allegedly said he used a knife to kill Thayer because she had “gone too far” in her abuse of him and in her comments about ending the relationship.

In the days since her death, friends and co-workers of Thayer have shared stories about a woman whom they described as caring, hard-working and soft-spoken.

Thayer, who was employed by MyPillow in Chaska, was remembered by co-workers as the kind of person that would never hurt a fly.

“I knew her pretty well. We didn’t hang out but when I say she liked to work, she was putting in 70 hours a week,” said Jamie Worley, MyPillow employee and Thayer’s friend.

“She would basically go there all day, go home for a little bit and come back. I went there today and went to the store and got her a rose and a teddy bear to put on her desk. When I got there I didn’t even look at any other of my coworkers,” Worley said. “I just stood at her desk with my head down. Everyone was just crying. It was a very emotional day and it still is.”

Worley remembers Thayer as a sweet and loveable person who befriended everyone. He also said Thayer moved to the United States from Cuba.

A vigil was held Thursday evening last week at the intersection were Thayer was found dead. Community members shared memories, lit candles and laid down flowers on the street corner.

“She was a really kind person who deserved better than this,” said Tori Finney, who organized the vigil alongside Walker Martinez. Thayer was a frequent customer at a Speedway gas station in Chaska where they used to work. Thayer usually purchased a can of Pepsi and a hot coffee while taking a break from her work across the street at MyPillow.

“That’s right, it was always Pepsi in a can,” Martinez said.