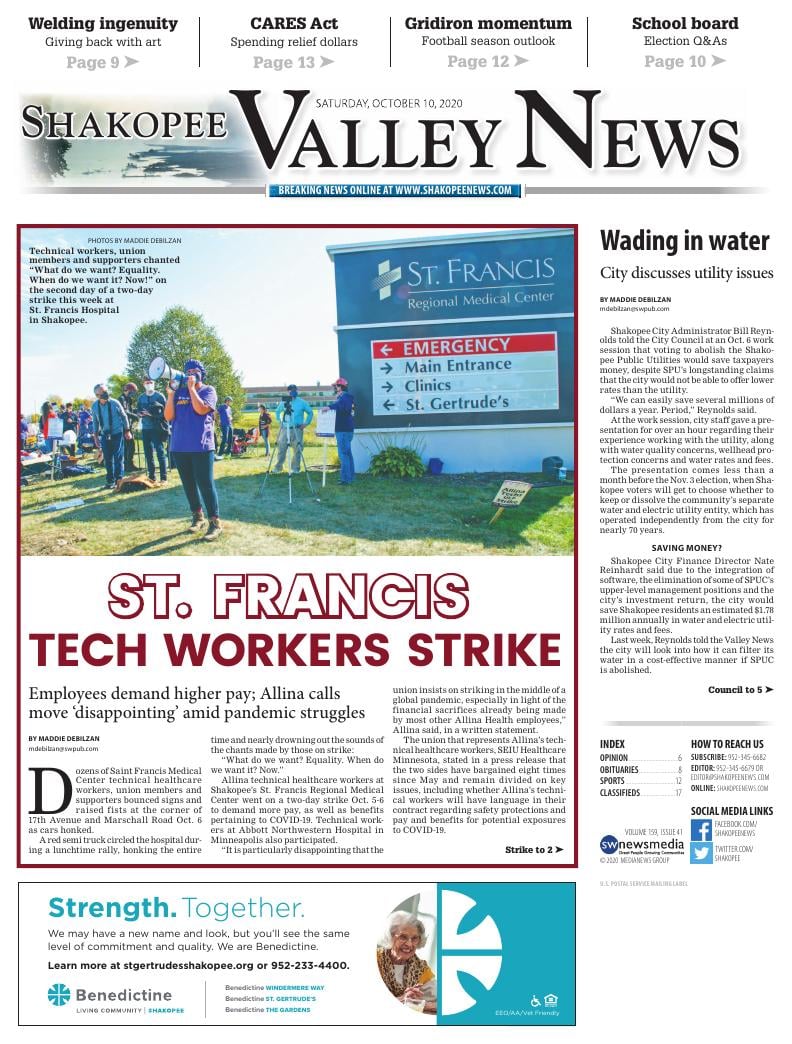 Technical workers, union members and supporters chanted “What do we want? Equality. When do we want it? Now!” on the second day of a two-day strike this week at St. Francis Hospital in Shakopee.

St. Francis employee Phil Goodmanson, who works in the radiology and diagnostics department, said St. Francis’ COVID-19 policies for technical workers is unacceptable. Goodmanson said he has been part of the bargaining agreement between the union that represents Allina’s technical healthcare workers, SEIU, and Allina.

Karlan Bean, a Blaine resident who is the organizer of a union called Teamsters Local 120 which represents workers from airline flight attendants to truck drivers to warehouse workers to police officers — drove a semi truck past the strikers dozens of times and rarely took his hand off his horn.

A red semi truck circled the hospital during a lunchtime rally, honking the entire time and nearly drowning out the sounds of the chants made by those on strike:

“It is particularly disappointing that the union insists on striking in the middle of a global pandemic, especially in light of the financial sacrifices already being made by most other Allina Health employees,” Allina said, in a written statement.

The union that represents Allina’s technical healthcare workers, SEIU Healthcare Minnesota, stated in a press release that the two sides have bargained eight times since May and remain divided on key issues, including whether Allina’s technical workers will have language in their contract regarding safety protections and pay and benefits for potential exposures to COVID-19.

“Unlike their co-workers, who have protections to keep their pay and benefits if they have to quarantine from COVID-19 exposure, these workers currently have a temporary agreement for the first time they have to quarantine, but in the last month multiple workers have been forced to use time earned under the contract before the pandemic when exposed to COVID a second time,” SEIU stated Sept. 29.

The strikes come after hospitals and clinics across the nation wrestle the COVID-19 pandemic while struggling to maintain their revenues.

Allina Health said in a written statement to the newspaper that “like most businesses and health care providers,” the organization has experienced “significant financial pressure as a result of the COVID-19 pandemic.”

The healthcare industry’s financial struggles were spotlighted this week when one of the state’s largest healthcare networks, M Health Fairview, announced a shake-up that will permanently change the face of Bethesda Rehabilitation Hospital and St. Joseph’s Hospital in St. Paul, shutter 16 of its 56 medical clinics in Minnesota and Wisconsin and reduce its workforce by 900 positions. One of those clinics slated to close is in Savage.

Allina Health announced in May a series of cost-cutting options to cope with reductions in services, including layoffs in areas where workloads are not expected to return, extending furloughs and a reduction in the number of full-time employees. The healthcare system said its financial challenges came from “drastically” reduced office visits in surgical, in-patient and emergency departments. At St. Francis, two positions have been eliminated in massage and acupuncture, a spokesperson for the healthcare system said.

St. Francis employee Phil Goodmanson, who works in the radiology and diagnostics department, drives 90 miles to work each day, from Albert Lea to Shakopee.

“I love working here,” he said. “But if we’re not all on the same playing field, we run the risk of our families getting sick.”

When asked about Allina’s statement regarding its disappointment with the union’s strike amid the pandemic, Goodmanson, who was part of the negotiations, laughed.

“It is disappointing, I agree,” he said. “It’s disappointing because I don’t think our proposals were that far out of the ballpark.”

He said other hospital workers will begin bargaining agreements with Allina this winter, which could shake things up even more if the healthcare system does not concede.

Wendy Harrison, who has worked as a radiologic technologist at St. Francis for nearly 19 years, said she had to take two days’ worth of PTO this year to stay home, because she had COVID-19 symptoms, but her test came back negative.

“It has been months of bargaining just to hear the word no,” Kia Pille, Harrison's coworker, yelled into the microphone Oct. 6 above the honking off 17th Avenue.

District 55A Rep. Brad Tabke, who spoke at the strike, told demonstrators the “Minnesota House is with you today.”

“We can’t afford to cut any corners and not get this done,” Tabke said.

U.S. Rep. Angie Craig also made an appearance at the strike.

“Our health care workers are essential workers, and they need to be treated that way,” she posted on Facebook.

Other supporters from across the state showed up at the rally, including members of the Awood Center, an organization that advocates for East African workers, many of whom work at the Amazon facility in Shakopee.

Karlan Bean, a Blaine resident who is the organizer of a union called Teamsters Local 120, drove a semi truck past the strikers dozens of times and rarely took his hand off the horn. Each time he passed, those on strike raised their signs and cheered.

“They’re our brothers and sisters,” Bean said of those on strike. “It’s what we do.”

Additional reporting by Andy Greder and Frederick Melo from the Pioneer Press.

Correction: A previous version of this article said Kia Pille had to take personal time to quarantine. That person was actually Wendy Harrison. This article has since been corrected. 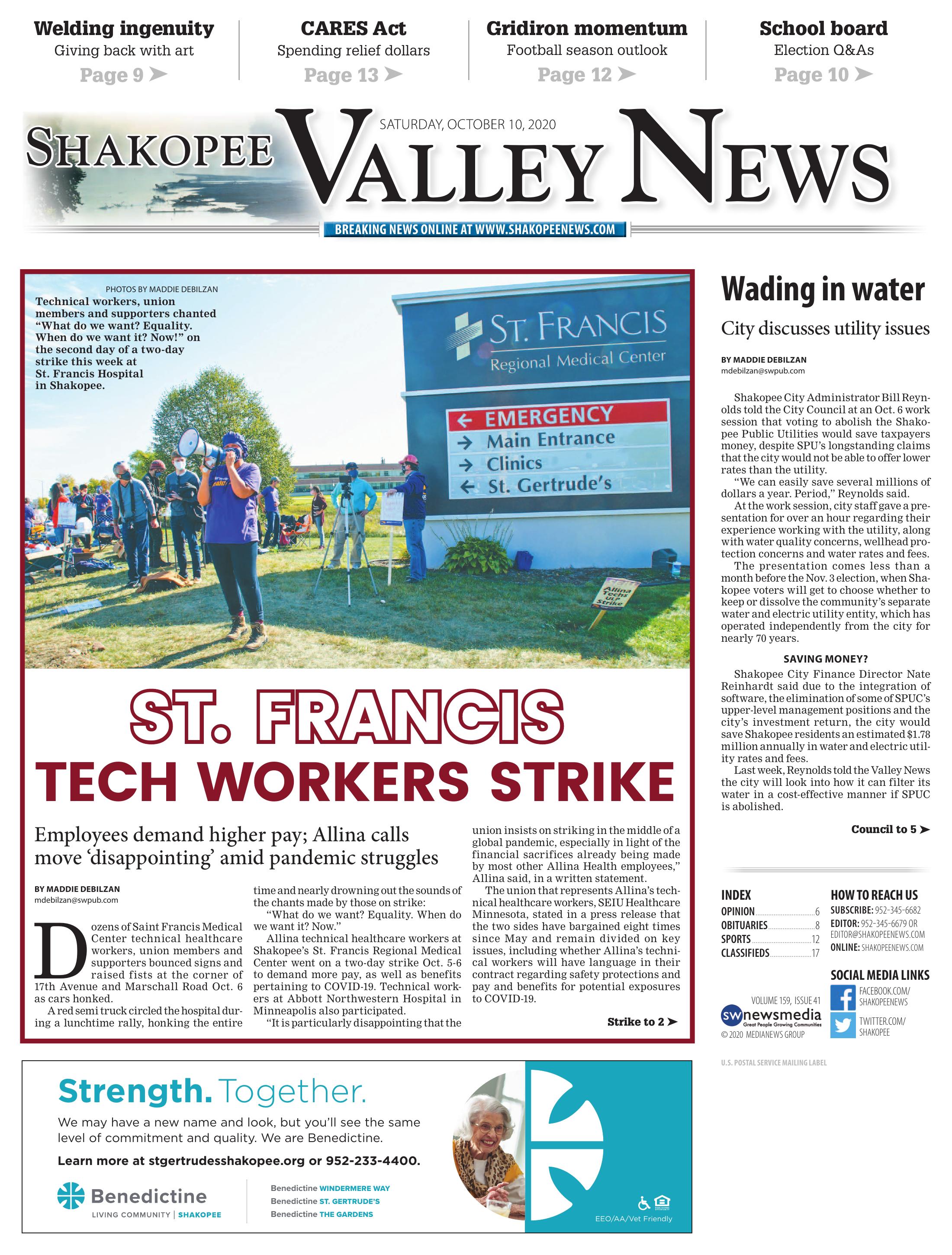