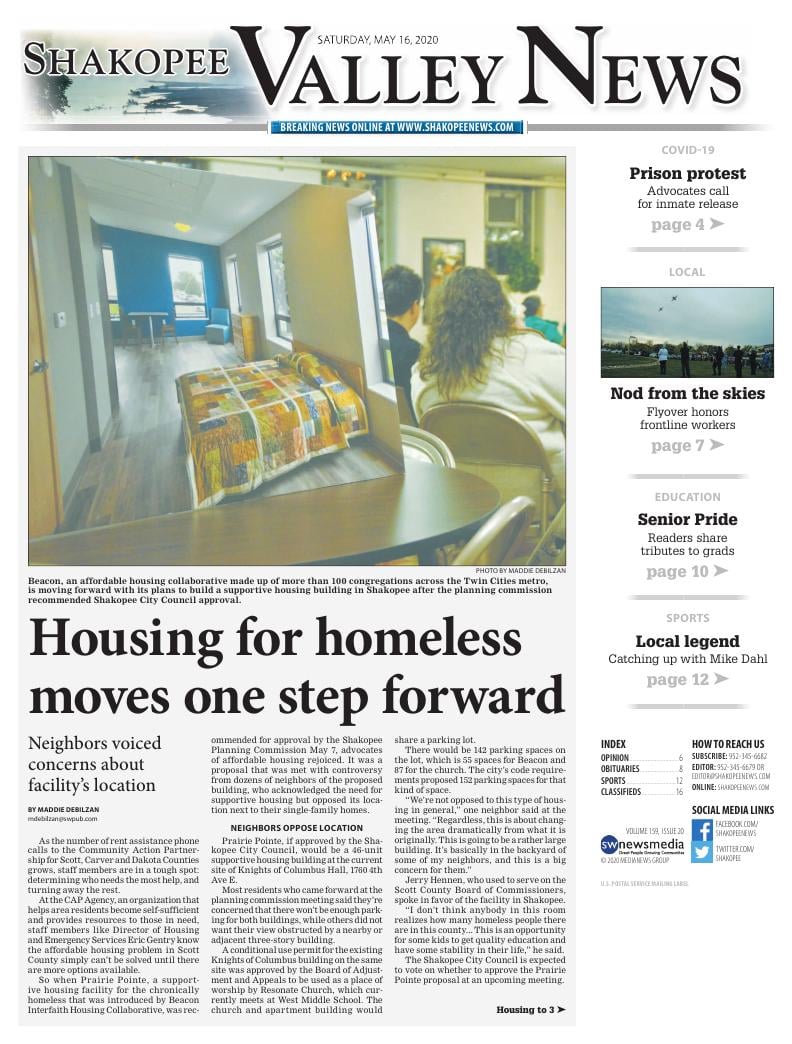 Beacon, an affordable housing collaborative made up of more than 100 congregations across the Twin Cities metro, is moving forward with its plans to build a supportive housing building in Shakopee after the planning commission recommended Shakopee City Council approval.

As the number of rent assistance phone calls to the Community Action Partnership for Scott, Carver and Dakota Counties grows, staff members are in a tough spot: determining who needs the most help, and turning away the rest.

At the CAP Agency, an organization that helps area residents become self-sufficient and provides resources to those in need, staff members like Director of Housing and Emergency Services Eric Gentry know the affordable housing problem in Scott County simply can’t be solved until there are more options available.

So when Prairie Pointe, a supportive housing facility for the chronically homeless that was introduced by Beacon Interfaith Housing Collaborative, was recommended for approval by the Shakopee Planning Commission May 7, advocates of affordable housing rejoiced. It was a proposal that was met with controversy from dozens of neighbors of the proposed building, who acknowledged the need for supportive housing but opposed its location next to their single-family homes.

Prairie Pointe, if approved by the Shakopee City Council, would be a 46-unit supportive housing building at the current site of Knights of Columbus Hall, 1760 4th Ave E.

Most residents who came forward at the planning commission meeting said they’re concerned that there won’t be enough parking for both buildings, while others did not want their view obstructed by a nearby or adjacent three-story building.

A conditional use permit for the existing Knights of Columbus building on the same site was approved by the Board of Adjustment and Appeals to be used as a place of worship by Resonate Church, which currently meets at West Middle School. The church and apartment building would share a parking lot.

“We’re not opposed to this type of housing in general,” one neighbor said at the meeting. “Regardless, this is about changing the area dramatically from what it is originally. This is going to be a rather large building. It’s basically in the backyard of some of my neighbors, and this is a big concern for them.”

Jerry Hennen, who used to serve on the Scott County Board of Commissioners, spoke in favor of the facility in Shakopee.

“I don’t think anybody in this room realizes how many homeless people there are in this county... This is an opportunity for some kids to get quality education and have some stability in their life,” he said.

The Shakopee City Council is expected to vote on whether to approve the Prairie Pointe proposal at an upcoming meeting.

Julie Siegert, the housing director for the Scott County Community Development Authority, said in a November interview with the Valley News that the county owns 660 affordable rental units. Every two to three years, when applications open up for residents to get in those units, there are usually around 1,300 households on the list.

Sarazin Flats, Shakopee’s newest affordable housing option, had more than 1,000 people on its waiting list who wanted to move into the remaining 48 units that opened last month.

“We have such a finite amount of resources, and it’s tough,” Gentry said. “As the population increases, I’ve seen the need for more and more community support grow.”

Affordable housing is typically defined as housing that is 30% or less of a household income.

Residents of Prairie Pointe, which will consist of units with up to three bedrooms, would be comprised of people who earn 30% of the area median income or less. The anticipated residents of this development would be single-parent families and families who are homeless or on the verge of homelessness. The facility would offer homework help for students and guidance for adults, and — while the building does not have a time limit for tenants, Beacon said most tenants in other supportive housing units across the state get back on their feet after two to three years and choose to move.

According to its preliminary plans outlined in December, Prairie Pointe would be funded privately and through donations, and would also seek around $1.5 million from Scott and Carver counties.

The current zoning of the property is designated for commercial uses like restaurants, retail and service businesses, offices, vehicle repair or mixed use developments.

Beacon said in its memo it chose to pursue development at this particular location because it’s in close proximity to employers like Amazon, MyPillow, RTL Construction and others in Valley Green Industrial Park. The site also has easy access to the MVTA bus route, the memo said.

“I think this is more a discussion about what we want Shakopee to be. And the amount of dignity we want people to have,” Planning Commissioner Josh Forsythe said.

Sources: A 2016 Scott County Housing study and a May 7, 2020 Shakopee Planning Commission presentation. 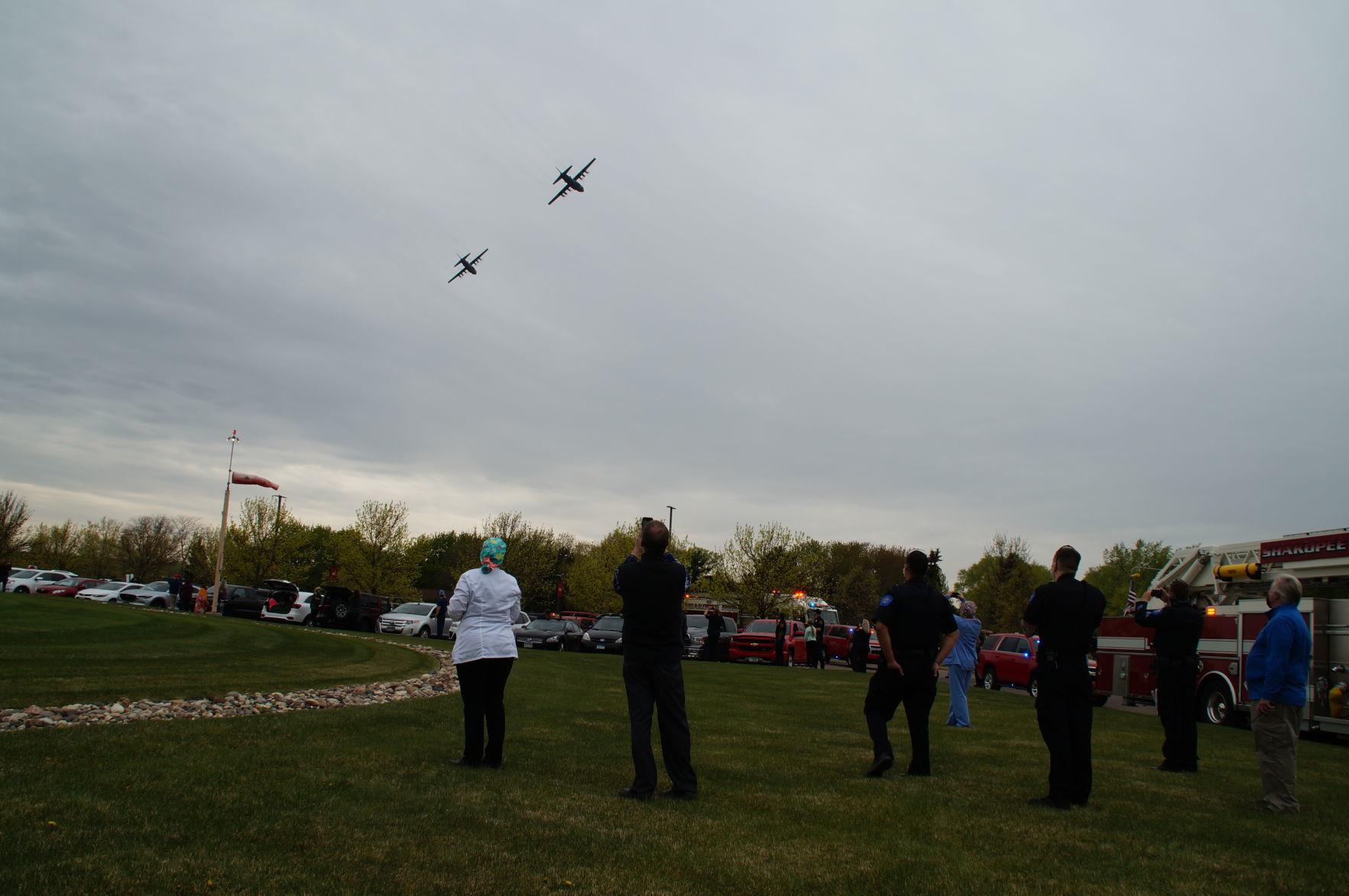 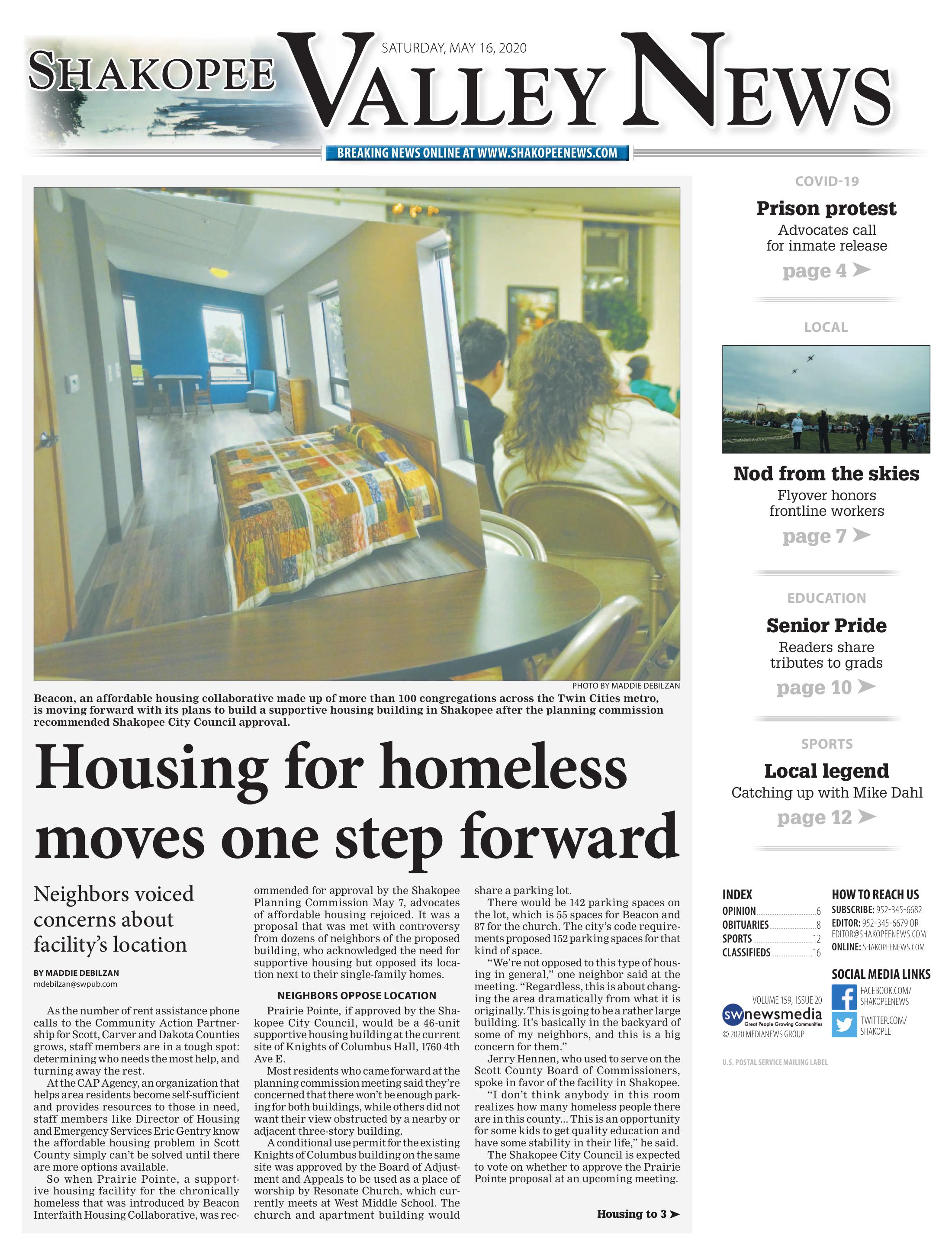