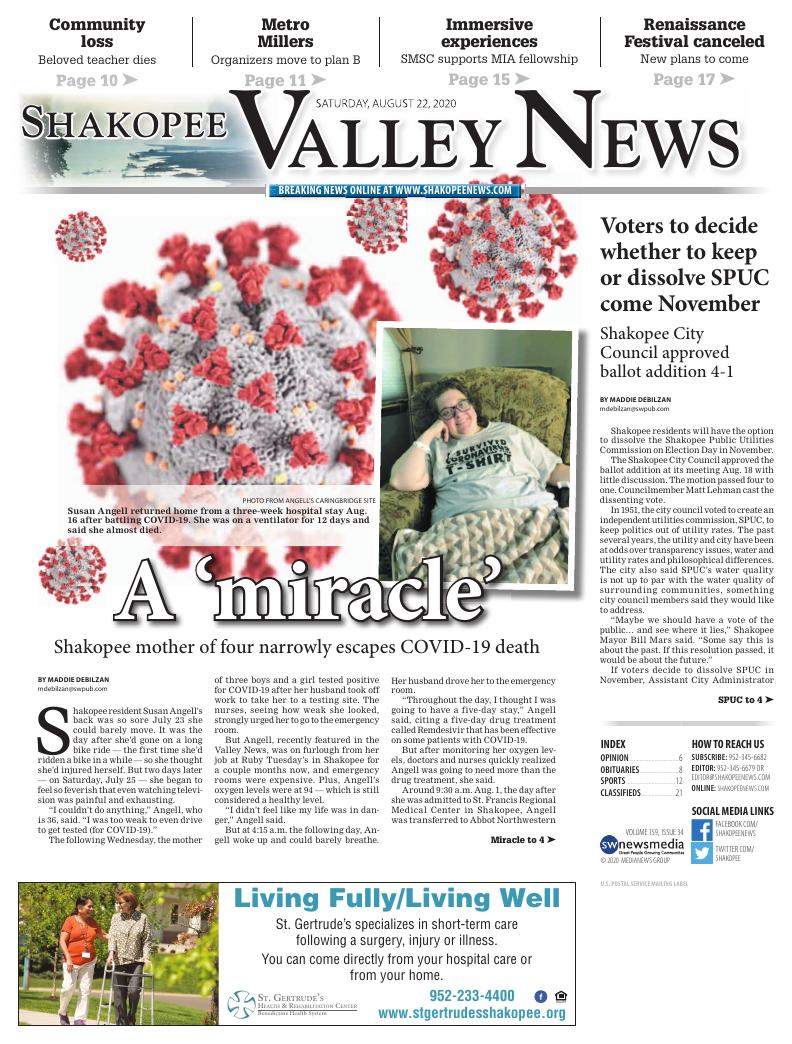 Photo courtesy of the Minnesota Department of Health

Shakopee resident Susan Angell’s back was so sore July 23 she could barely move. It was the day after she’d gone on a long bike ride — the first time she’d ridden a bike in a while — so she thought she’d injured herself. But two days later — on Saturday, July 25 — she began to feel so feverish that even watching television was painful and exhausting.

The following Wednesday, the mother of three boys and a girl tested positive for COVID-19 after her husband took off work to take her to a testing site. The nurses, seeing how weak she looked, strongly urged her to go to the emergency room.

But Angell, recently featured in the Valley News, was on furlough from her job at Ruby Tuesday’s in Shakopee for a couple months now, and emergency rooms were expensive. Plus, Angell’s oxygen levels were at 94 — which is still considered a healthy level.

“I didn’t feel like my life was in danger,” Angell said.

But at 4:15 a.m. the following day, Angell woke up and could barely breathe. Her husband drove her to the emergency room.

“Throughout the day, I thought I was going to have a five-day stay,” Angell said, citing a five-day drug treatment called Remdesivir that has been effective on some patients with COVID-19.

But after monitoring her oxygen levels, doctors and nurses quickly realized Angell was going to need more than the drug treatment, she said.

Around 9:30 a.m. Aug. 1, the day after she was admitted to St. Francis Regional Medical Center in Shakopee, Angell was transferred to Abbot Northwestern Hospital in Minneapolis, where she was intubated — a last-measure resort for patients whose oxygen levels dive below 70%. It means a machine was essentially breathing for her.

Since Angell wasn’t allowed to have guests with her in the Intensive Care Unit, she had to say goodbye to her husband over the phone.

“He prayed for me, and I just said, tell the kids I love them, because I didn’t know if I was going to live or die,” Angell said, her voice shaky as she remembered the moment.

The video call with her husband was the last concrete thing she remembered until 12 days later, on Aug. 12, when she woke up.

Her husband and kids called Angell every day, even though she was unconscious.

“I believe it is very important that Suzy can hear a familiar voice regularly,” Angell’s husband Jeremy Angell posted on her Caringbridge page during her second day on the ventilator. “Saving any of my worries or frustrations, just positive talk to lift her up and know that there are hundreds of people praying for her complete healing. She’s not alone.”

“I feel like my husband told me, ‘I need you to remember that the hospital is there to help you,’” Angell said as she tried to think back on her calls with family. But she couldn’t remember if he told her that before or after she was unconscious.

On Aug. 12, after 12 days of unconsciousness, Angell was taken off the ventilator.

“I couldn’t talk when I woke up because I had a breathing tube,” Angell said. “They let me Zoom call with my husband, and they gave me a white board to try to communicate, and I was trying to write words, but it was just squiggles; it didn’t make sense. I remember thinking, how could he not understand this?”

After she woke up, Angell said the staff told her most patients need to stay at the hospital another two weeks to make sure they are strong enough to go home. But she was discharged Aug. 16 — four days after being taken off the ventilator.

“The occupational therapist said, ‘You are a miracle. Your recovery is a miracle. You can go home whenever you want to,’” Angell said.

Angell said she has no underlying conditions, and said nursing staff told her she was one of the youngest patients they’ve seen suffer from such severe symptoms.

“My doctor said this didn’t happen to me for any specific reason as opposed to somebody else,” she said. “He said there’s no rhyme or reason for it.”

The Angells went to a small outdoor barbecue July 18 with about 10 guests when it started raining and the group gathered inside. That’s where Angell thinks she contracted the disease, because a few days later, another person at the barbecue tested positive for COVID-19.

Now that Angell is back home, she won’t be going on bike rides or playing outside with her kids for a while longer. Because she was bedridden for so long, her muscles weakened to the point where she has to relearn how to do simple movements, like walking and eating.

“Those first couple days off the breathing tube felt like I had to climb a mountain,” Angell said. “When they first asked me to try to stand, I was like, ‘pshh, I can stand, babies can stand.’ But then I tried, and I was like, ‘nope, I can’t stand.’”

Angell said she no longer feels feverishly sick, but her throat still hurts from her breathing tube and her lungs still hurt from the trauma they went through. The road ahead is still long.

“Just lifting a fork to my face was impossible,” Angell said. “I had to use finger foods because it was so exhausting to eat. It is physically exhausting recovering from this, if you’ve gone into a coma.”

Now, Angell is able to walk with a walker. She was told the permanent damage caused to her lungs could put her at greater risk if she contracts a respiratory illness in the future.

“I’m still dealing with it mentally; it’s a lot to deal with,” she said. “It’s definitely changed my life, and has been a pivotal moment in our family. It’s really put things into perspective for everybody.”

“He prayed for me, and I just said, tell the kids I love them, because I didn’t know if I was going to live or die."

Susan Angell, speaking to her husband

Organizers move to plan B

Pictured is a Native American art gallery at the Minneapolis Institute of Art.

According to an investigation surrounding former Shakopee Public Utilities Manager John Crooks, the utilities commission has violated several statutes over the years.

Shakopee residents will have the option to dissolve the Shakopee Public Utilities Commission on Election Day in November.

The Shakopee City Council approved the ballot addition at its meeting Aug. 18 with little discussion. The motion passed four to one. Councilmember Matt Lehman cast the dissenting vote.

In 1951, the city council voted to create an independent utilities commission, SPUC, to keep politics out of utility rates. The past several years, the utility and city have been at odds over transparency issues, water and utility rates and philosophical differences. The city also said SPUC’s water quality is not up to par with the water quality of surrounding communities, something city council members said they would like to address.

“Maybe we should have a vote of the public… and see where it lies,” Shakopee Mayor Bill Mars said. “Some say this is about the past. If this resolution passed, it would be about the future.”

If voters decide to dissolve SPUC in November, Assistant City Administrator Nate Burkett said, the city does not anticipate the reduction of existing SPUC staff members. The utility would either be integrated into the city departments, or the city would contract with outside providers to manage it.

“The areas of concern have been shown to us,” Councilmember Angelica Contreras said before offering the motion to add the option to the ballot. “We’re giving out the information; we’ll let you choose.”

The request to discuss the dissolution of SPUC comes after a recently-completed investigation into the Shakopee Public Utilities Manager John Crooks, who has been earning more than the state salary cap allows since 2017.

At its Aug. 13 meeting, SPUC voted to renegotiate Crooks’ current salary and pension plan, as well as determine a repayment plan for the excess earnings he’s received.

Mars said he doesn’t believe the issues between the city and SPUC revolve around the “delivery of the commodity.”

“The delivery of our water, the delivery of electrical service to our community is very good. But… if the leader of the organization should be above the law… it gets to me,” Mars said. “I use words like integrity, morals, values… to find there was a violation of state law for a couple years… that was telling for me.”

Shakopee City Councilmember Jody Brennan, who was recently appointed to serve on the utilities commission, referenced errors in some of the SPUC documents she’s reviewed and what she believes is a lack of transparency by the utility.

Up until the 1950s, the city managed its own water and electric utilities, through what was called Shakopee Municipal Utility. The city subdivision was run by a superintendent, with oversight by a city light and water committee of the city council.

But in the 1940s, as Shakopee grew, the uptick in business demanded more time. That’s when some people in the community began to suggest Shakopee’s water and electric utilities should divorce itself from city oversight.

Controversy surrounding utility fees expanded with the city’s population. Crooks said in an interview with the Valley News last summer when the Highway 169 bridge was constructed, it made traveling to Shakopee from the Twin Cities easy, sparking growth.

In order to accommodate that growth, SPUC began to raise its water capacity charges to pay for new water facilities.

“We’re growing like gangbusters now,” Crooks said. “And we have to plan and make sure our facilities are in place for that.”

The water capacity charge slowed down several high-profile local projects such as the Lions Park splash pad and has been the catalyst toward conversations about dissolving the utility.

The splash pad dilemma caused some council members and residents to call for the dissolution of SPUC. Kayden Fox, who was recently appointed as a Shakopee Public Utilities commissioner, started an online petition to merge the two entities last summer.

SPU commissioner Mathew Meyer said last summer if SPUC goes back under the jurisdiction of the city council, it would be easy to dip into the utilities fund to pay for other things the city needs.

“You put that under the city council and you’re going to have city staffers and officials wondering ‘Why can’t we just dip into the fund?’” Meyer said. 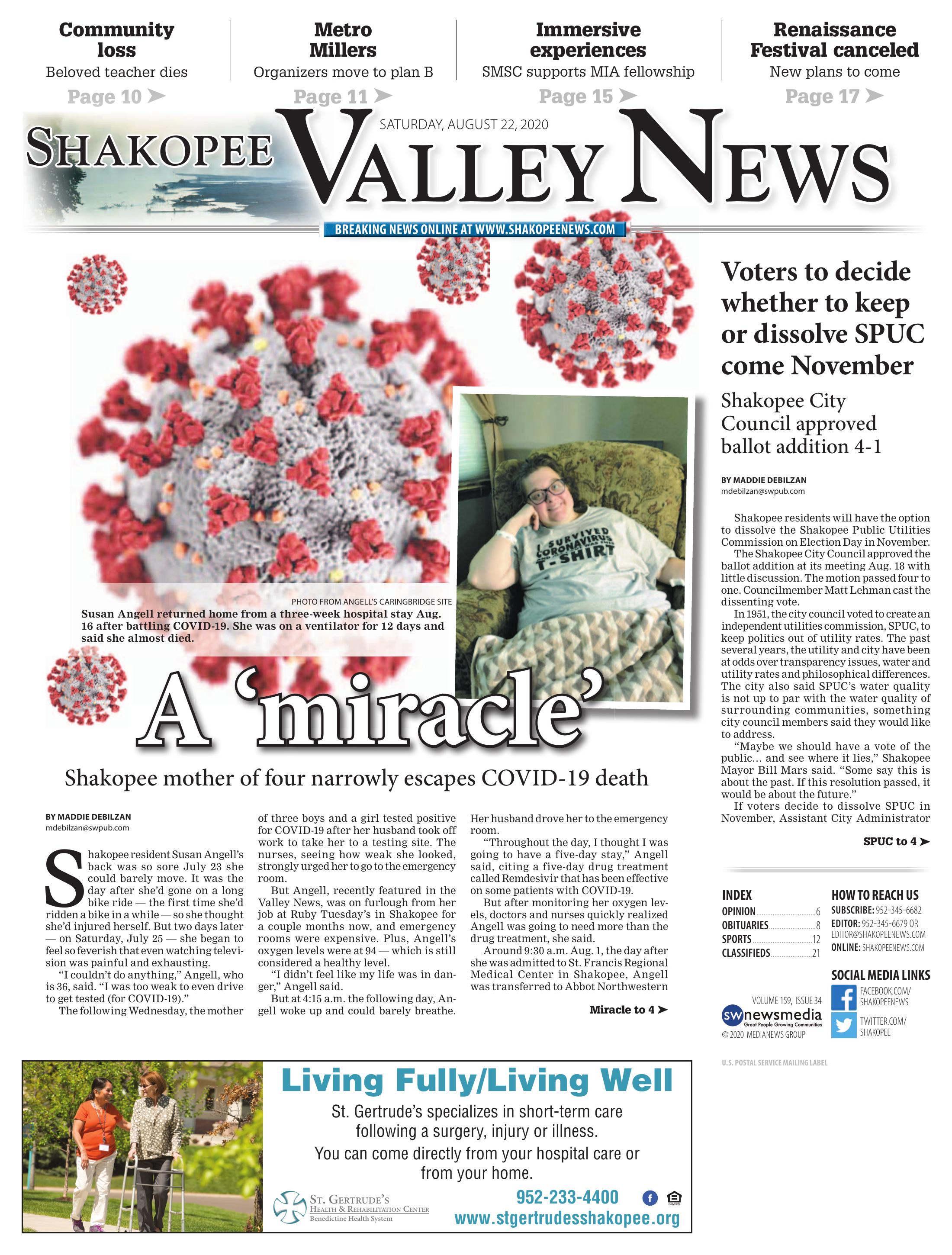