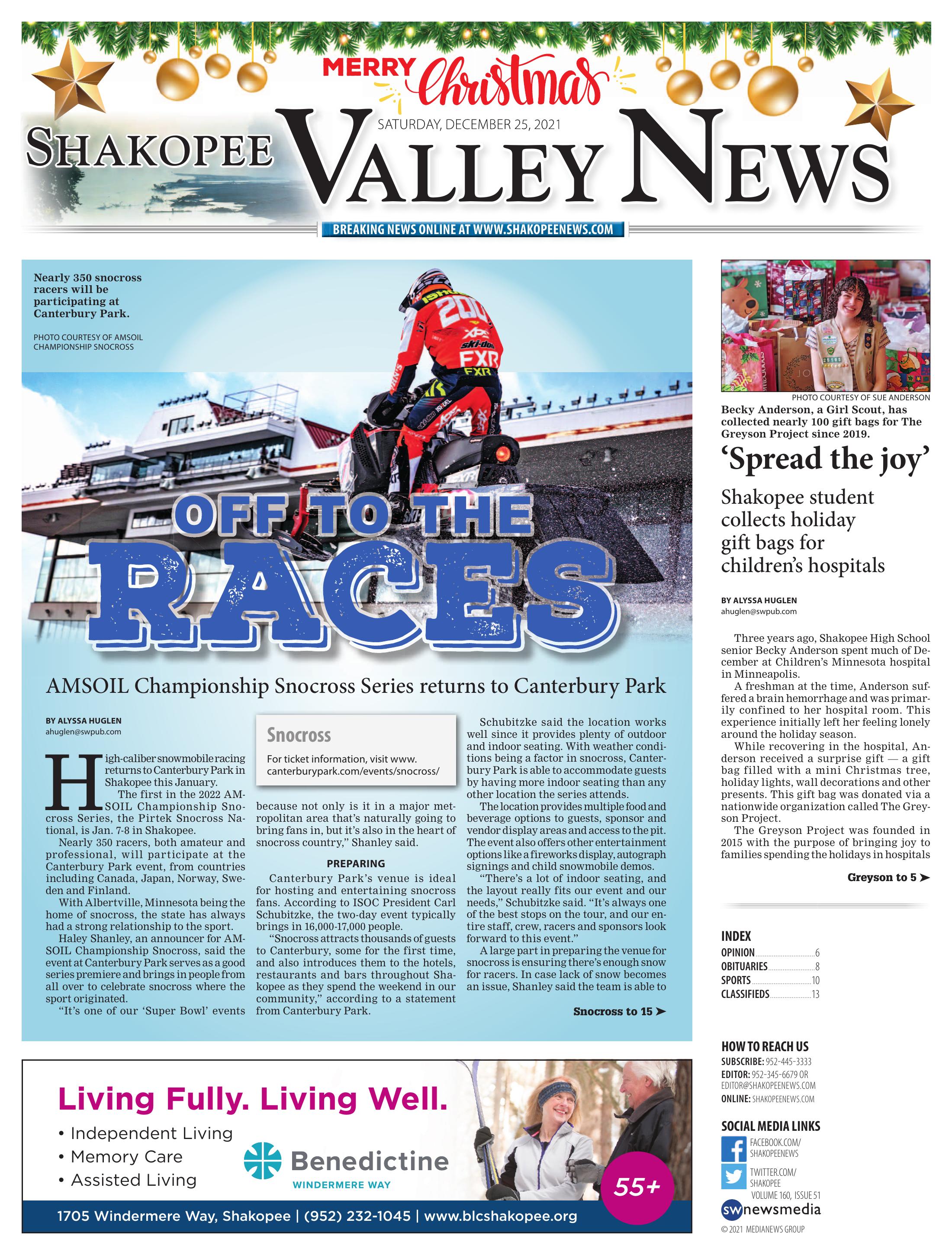 Nearly 350 snocross racers will be participating at Canterbury Park.

Racers from all over the world will be competing in the AMSOIL Championship Snocross Series beginning in January.

The first in the 2022 AMSOIL Championship Snocross Series, the Pirtek Snocross National, is Jan. 7-8 in Shakopee.

Nearly 350 racers, both amateur and professional, will participate at the Canterbury Park event, from countries including Canada, Japan, Norway, Sweden and Finland.

With Albertville, Minnesota being the home of snocross, the state has always had a strong relationship to the sport.

Haley Shanley, an announcer for AMSOIL Championship Snocross, said the event at Canterbury Park serves as a good series premiere and brings in people from all over to celebrate snocross where the sport originated.

“It’s one of our ‘Super Bowl’ events because not only is it in a major metropolitan area that’s naturally going to bring fans in, but it’s also in the heart of snocross country,” Shanley said.

“Snocross attracts thousands of guests to Canterbury, some for the first time, and also introduces them to the hotels, restaurants and bars throughout Shakopee as they spend the weekend in our community,” according to a statement from Canterbury Park.

Schubitzke said the location works well since it provides plenty of outdoor and indoor seating. With weather conditions being a factor in snocross, Canterbury Park is able to accommodate guests by having more indoor seating than any other location the series attends.

The location provides multiple food and beverage options to guests, sponsor and vendor display areas and access to the pit. The event also offers other entertainment options like a fireworks display, autograph signings and child snowmobile demos.

“There’s a lot of indoor seating, and the layout really fits our event and our needs,” Schubitzke said. “It’s always one of the best stops on the tour, and our entire staff, crew, racers and sponsors look forward to this event.”

A large part in preparing the venue for snocross is ensuring there’s enough snow for racers. In case lack of snow becomes an issue, Shanley said the team is able to collect massive piles of snow from somewhere else in the city. Usually, this snow is piled up from clearing out driveways and parking lots.

When natural snow isn’t available, proper weather conditions must be in place for the team to use snow guns. Shanley said these snow guns are usually hooked up to a pond or some other water source so snow can be made and brought to the venue for the event.

ISOC Racing, the company running the AMSOIL series, has had a relationship with Canterbury Park for well over 20 years. But last year, the snocross series was not able to take place at the park due to the pandemic.

Schubitzke said the situation was unfortunate, but completely understandable at the time in order to keep people safe. He added that now looking ahead to this season, feelings of returning to the park are at an all-time high.

“I really missed working with them and being at the venue,” Schubitzke said. “We’re really excited and looking forward to being back.”

“The inability to hold the event last winter was another setback in what was a very challenging period,” according to a Canterbury Park statement. “Welcoming them back is important to our special events business and a great start to 2022.”

As the premiere event approaches, Schubitzke said he is excited to resume working with the park this January and looks forward to people visiting from all over to kick off the season.

“We’re really looking forward to this, and I think it’ll be exciting for everyone. It should be a very successful event,” Schubitzke said.

Becky Anderson, a Girl Scout, has collected nearly 100 gift bags for The Greyson Project since 2019.

A freshman at the time, Anderson suffered a brain hemorrhage and was primarily confined to her hospital room. This experience initially left her feeling lonely around the holiday season.

While recovering in the hospital, Anderson received a surprise gift — a gift bag filled with a mini Christmas tree, holiday lights, wall decorations and other presents. This gift bag was donated via a nationwide organization called The Greyson Project.

The Greyson Project was founded in 2015 with the purpose of bringing joy to families spending the holidays in hospitals by donating holiday gift bags. Greyson was a baby who, before passing away in 2011, received holiday decorations from family members to spruce up his hospital room for Christmas.

Anderson said she was touched to have people thinking of her during such a stressful time.

“Having the decorations up immediately just made things so much better,” Anderson said. “It made things feel more lively and less like I was in a hospital.”

Anderson has paid it forward every year since by collecting gift bags for The Greyson Project.

Anderson’s work with The Greyson Project has grown over the last few years. She donated 19 bags in 2019 and 40 bags in 2020. She recently finished up donations for this year, giving out 39 bags in 2021.

Anderson said she felt compelled to get involved after remembering how much the gift bag meant to her while she stayed in the hospital.

“I was thinking to myself, ‘I want to do this for people because it helped me so much.’ I felt like I wanted to spread the joy,” Anderson said.

According to Anderson, the bags typically include items like mini Christmas trees, wall decorations and games, totaling about $30 worth of gifts.

Anderson said her favorite things to add to the bags are fuzzy socks and chapstick, since she was grateful having chapstick while in the hospital during winter.

She adds that many bags also follow a specific theme and hospitals help create item lists and themes for kids, depending on their interests and ages.

Anderson has reached out to the community when collecting these gift bags, receiving support from Girl Scout troops, as well as her mom’s coworkers.

From there, her family delivers the bags to one of Greyson’s relatives who lives in the Twin Cities area. The gifts are then donated to Children’s Minnesota in Minneapolis and St. Paul.

Last year, the Greyson Project provided 1,332 gift bags to around 30 different hospitals in 12 states. As of 2020, the project has donated nearly 5,800 bags to hospitals around the country.

Having wrapped up another year of donations, Anderson said she loves helping out these families around the holidays the same way hers was helped a few years ago.

“Receiving this gift is not only helpful for the kids, but it’s also really helpful for the parents because it’s like a reminder that there still is joy in the world and people who care,” Anderson said. “It gives a little warmth to my heart and really makes me grateful.”

"It’s like a reminder that there still is joy in the world and people who care. It gives a little warmth to my heart and really makes me grateful.”