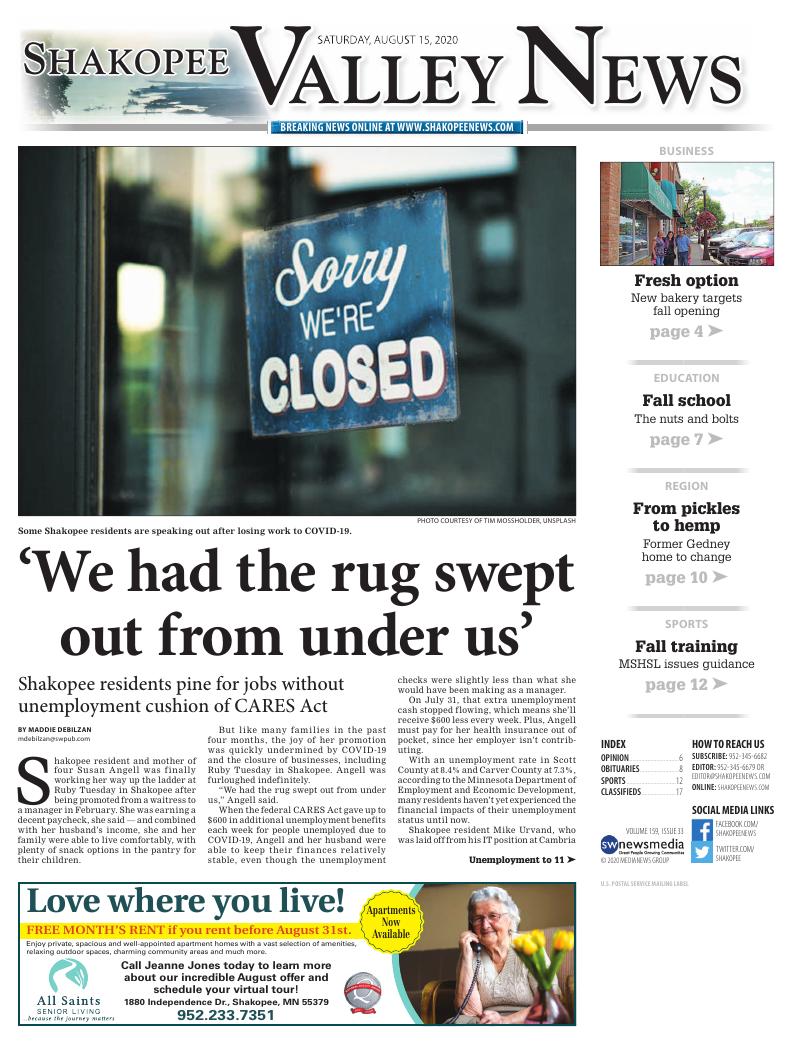 News
'We had the rug swept out from under us:' Shakopee residents pine for jobs without unemployment cushion
By Maddie DeBilzan mdebilzan@swpub.com

Some Shakopee residents are speaking out after losing work to COVID-19.

Shakopee resident and mother of four Susan Angell was finally working her way up the ladder at Ruby Tuesday in Shakopee after being promoted from a waitress to a manager in February. She was earning a decent paycheck, she said — and combined with her husband’s income, she and her family were able to live comfortably, with plenty of snack options in the pantry for their children.

But like many families in the past four months, the joy of her promotion was quickly undermined by COVID-19 and the closure of businesses, including Ruby Tuesday in Shakopee. Angell was furloughed indefinitely.

“We had the rug swept out from under us,” Angell said.

When the federal CARES Act gave up to $600 in additional unemployment benefits each week for people unemployed due to COVID-19, Angell and her husband were able to keep their finances relatively stable, even though the unemployment checks were slightly less than what she would have been making as a manager.

On July 31, that extra unemployment cash stopped flowing, which means she’ll receive $600 less every week. Plus, Angell must pay for her health insurance out of pocket, since her employer isn’t contributing.

With an unemployment rate in Scott County at 8.4% and Carver County at 7.3%, according to the Minnesota Department of Employment and Economic Development, many residents haven’t yet experienced the financial impacts of their unemployment status until now.

Shakopee resident Mike Urvand, who was laid off from his IT position at Cambria USA in Belle Plaine, said he was making roughly $1,000 per week when he was laid off in March. A bad fall at home and two fractured vertebrae in May forced him bedridden for the following two months, meaning his job search was delayed until just recently.

Urvand said normally, he’d be picky about finding a job until he found the right fit with reasonable pay. And with his wife’s income, Urvand is able to afford a couple months to search before he needs to get back to work. But with four children and $600 less entering their bank account each week, he’s starting to feel a creeping urgency.

Urvand, who has spent about 15 years in IT, would normally apply for senior IT positions. Now, he’s facing the possibility of having to apply for jobs he’s overqualified for at help centers, or installation jobs that require manual labor and travel.

Urvand said without the extra CARES Act money, he and other families will be forced into making decisions that are far more complicated than applying for any job off the street. He said the question is not whether he could get a job, but the kind of job he gets, and what that would mean for his family.

Angell also said finding a new job isn’t about applying to any job she sees online — it’s about finding a job that pays her enough to justify sending her children to daycare.

“I have to make a certain amount to pay for daycare, because at some point it wouldn’t make sense to work,” Angell said. “You can’t just take any job… And in my case, making $12 an hour isn’t going to cut it for me.”

The Shakopee and Chaska CareerForce centers can help local residents who are unemployed find jobs, and can help connect residents to hundreds of employers in the area, Jen Brewington, Economic Development Specialist for Shakopee, said. The centers have specialists available to provide career coaching, share local employment information or refer residents to customized resources.

“Overqualified candidates can hit the ground running, using their existing knowledge and skills to push the company forward almost immediately,” Brewington said. “Apply anyways. Right now there is a worker shortage and employers may be willing to fast track you to your desired position.”

“The unemployment numbers are eye-opening… time will tell what happens either at the federal level and what are the impacts to our programs based on that,” she said.

“It’s not about the $600. It’s about people who have been displaced from their livelihoods.” 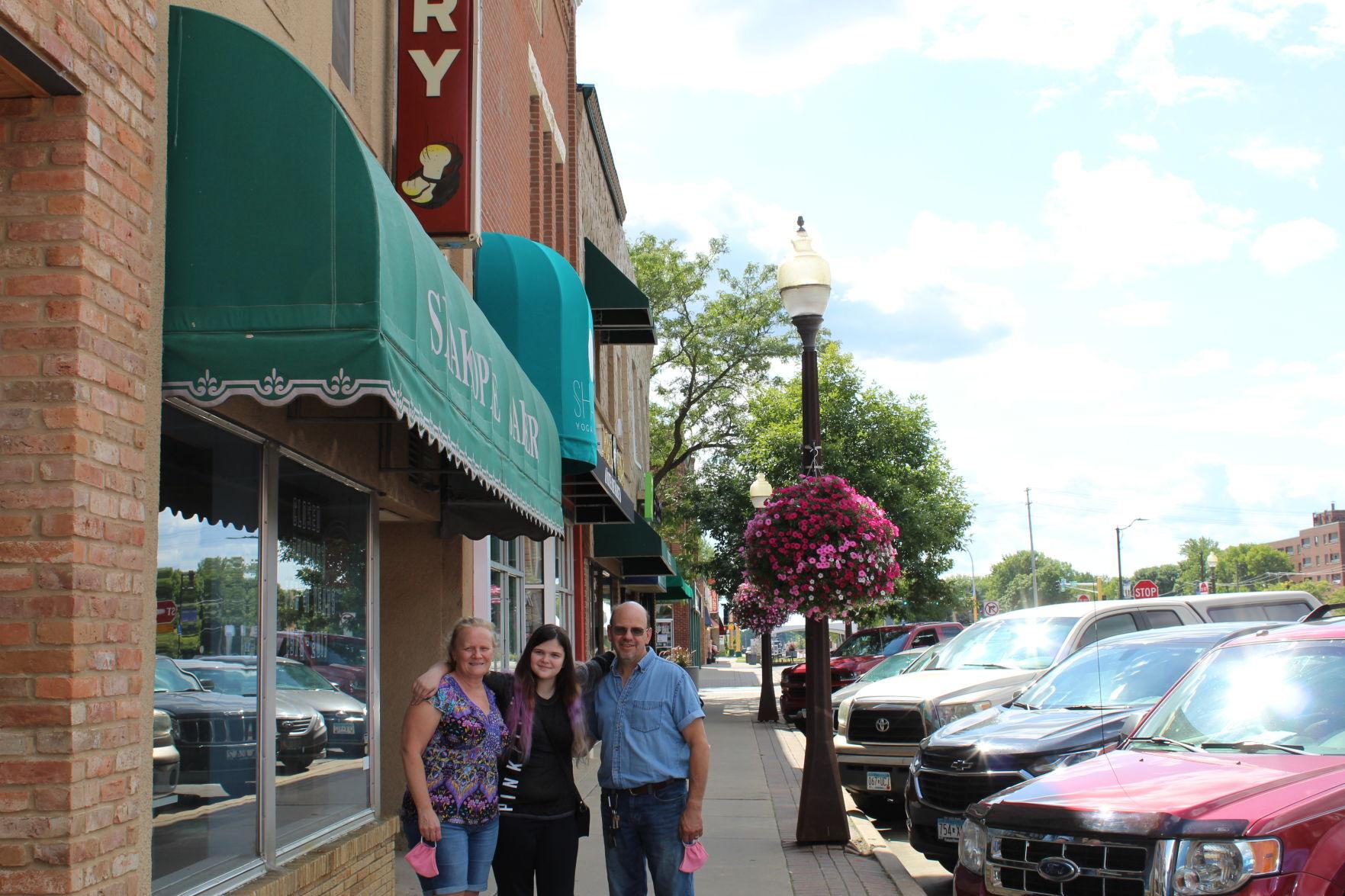 Owners Don and Lauri Bittner and their daughter pose in front of the bakery building. 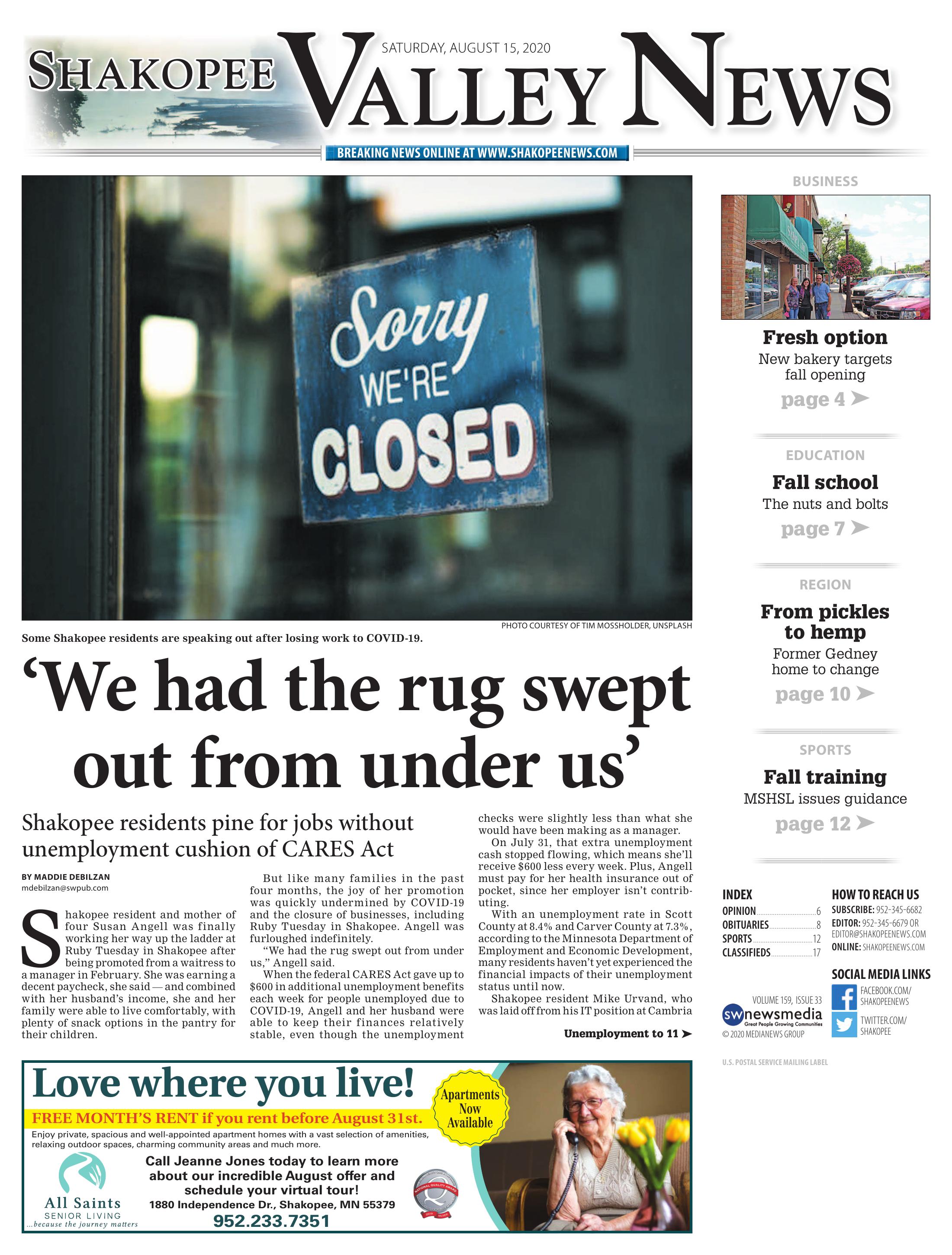