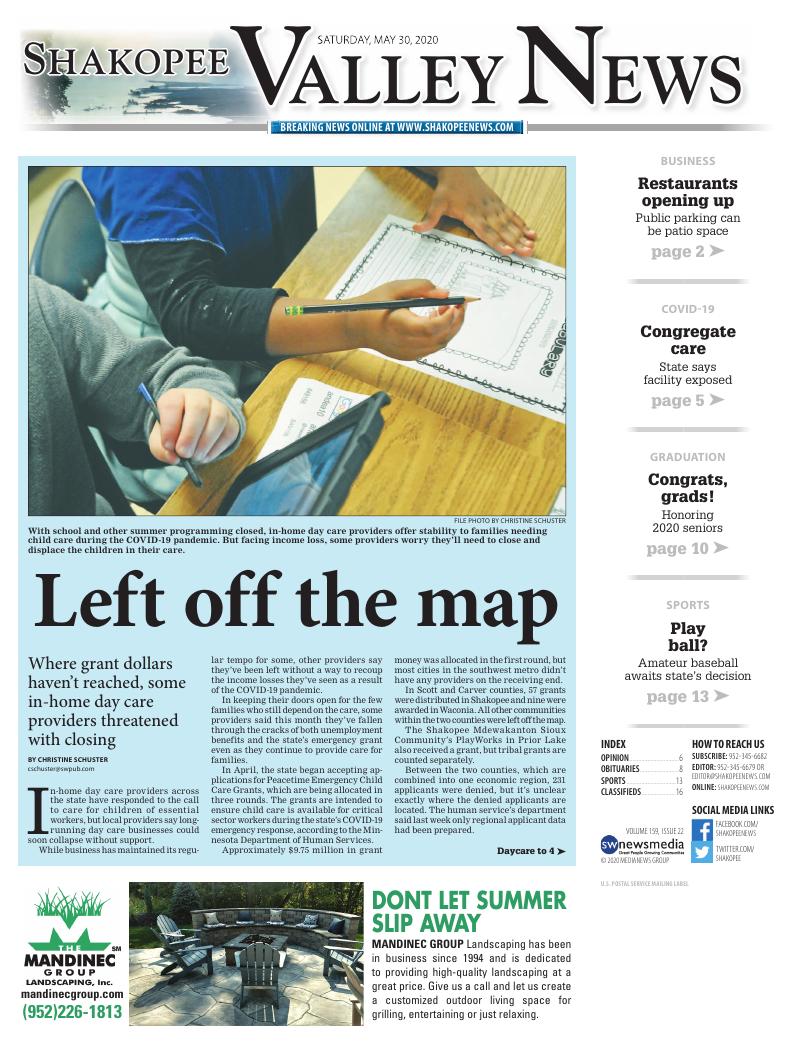 With school and other summer programming closed, at-home day care providers offer stability to families needing childcare during the COVID-19 pandemic. But facing income loss, some providers worry they’ll need to close and displace the children in their care.

Photo by Gautam Arora on Unsplash

In April, the state of Minnesota began accepting applications for Peacetime Emergency Child Care Grants, which are being allocated in three rounds. The grants are intended to ensure child care is available for critical sector workers during the state's COVID-19 emergency response.

In-home day care providers across the state have responded to the call to care for children of essential workers, but local providers say long-running day care businesses could soon collapse without support.

While business has maintained its regular tempo for some, other providers say they’ve been left without a way to recoup the income losses they’ve seen as a result of the COVID-19 pandemic.

In keeping their doors open for the few families who still depend on the care, some providers said this month they’ve fallen through the cracks of both unemployment benefits and the state’s emergency grant even as they continue to provide care for families.

In April, the state began accepting applications for Peacetime Emergency Child Care Grants, which are being allocated in three rounds. The grants are intended to ensure child care is available for critical sector workers during the state’s COVID-19 emergency response, according to the Minnesota Department of Human Services.

Approximately $9.75 million in grant money was allocated in the first round, but most cities in the southwest metro didn’t have any providers on the receiving end.

In Scott and Carver counties, 57 grants were distributed in Shakopee and nine were awarded in Waconia. All other communities within the two counties were left off the map.

The Shakopee Mdewakanton Sioux Community’s PlayWorks in Prior Lake also received a grant, but tribal grants are counted separately.

Between the two counties, which are combined into one economic region, 231 applicants were denied, but it’s unclear exactly where the denied applicants are located. The human service’s department said last week only regional applicant data had been prepared.

“I’m very concerned about the business,” she said. “I don’t have good feelings about it.”

“The grant process in Minnesota has been broken for many years,” she said.

According to scoring rubrics provided by DHS, the number of hospital beds and critical facilities in an applicant’s town translate into points.

Shakopee — home to a regional medical center, the county jail and a prison — boasts a high number of point-scoring operations. Ridgeview Medical Center is located in Waconia.

Brule went from 11 children in her care to six since the pandemic hit. The financial strain led her to stop contributing to her retirement account and take a second job.

“Because of the 32 hour requirement, we are just kicked out,” Luikens said.

Amber Angell, whose mother runs an in-home day care in Prior Lake, reached out to the Minnesota Department of Employment and Economic Development for help after her mother’s business dropped from 11 children to three.

“I know that is super hard and we do not necessarily like or agree with everything that was done to create these programs either,” DEED wrote in a message to Angell reviewed by Southwest News Media.

“Everything is just backwards and it’s super frustrating,” Angell said. “They are going to lose their business if something doesn’t get done about it.”

The emergency grant program should support providers who fall through the cracks of unemployment, Luikens said, but it’s scoring method prevents the money from reaching those who need it most.

“Why would it not be dependent on how many kids you still have in care, and more importantly how many you’ve lost?”

After being denied grants in the first two rounds, Brule said she isn’t hopeful the third round will play out any differently for her, partly because some recipients apply in all three rounds.

The state hasn’t yet released data on the second round of grants, but Brule said many providers received a grant in both rounds.

“If I could have even a quarter of that just to help with bills...” Brule sighed.

Side-by-side, the applicant scoring rubrics for the first and second round were almost identical.

A new scoring item added to the second round deducts up to two points off an applicant’s score if they’ve already received grants, loans or other emergency funds. However, the reduction only applies if an applicant received $50,000 or more.

On the rubric, the measure is titled “financial risk.”

The second round also offered one point to providers in counties bordering greater Minnesota counties with large hospitals and critical facilities.

Providing care in a city with an identified child care shortage carried one point, but up to four points were available based-on the percentage of essential workers’ families living within the entire county.

Providers caring for children with special needs, offering non-standard hours or serving children whose first language is not English could earn one point for each.

Up to four points could be earned if fewer applications were received from the applicant’s city.

“The purpose of these grants is to respond to emergencies, so the distribution of grants could shift depending on needs and response to the pandemic,” DHS wrote in an email. “Applicants who apply and receive a grant one month will be eligible and required to apply to receive the grant for another month. Applicants who apply and don’t receive an award in one month may reapply to receive a grant in a succeeding month.”

Brule recently took a second job with a caregiving company to supplement her income. She cares for children during the day, and helps her adult clients in the evenings.

She sometimes works over 14 hours in one day.

“I’m trying to hang in there as long as possible.”

Whether it’s caring for a few children or a full house, local in-home day care providers say the COVID-19 pandemic brings a new sense of urgency and meaning to their mission.

“My purpose is to keep those kids stable and healthy mentally, not just physically,” Luikens, a provider in Savage for 21 years, said.

These days, she’s caring for around five to nine children, but some days she cares for as many as 12.

Chanhassen resident Laurie Kerveliet said her day care business, Just Like Home, is also as busy as ever.

This summer she expects to see more school-aged children as summer programming and camps are canceled.

Day care, maybe now more than ever, is an important source of stability for children in a changing world, providers say.

“These kids need normalcy,” Kerveliet said. “Most of the kids I care for have been with me since they were six weeks old or 12 weeks old.”

Even the youngest children are impacted by the crisis.

“Kids are so intuitive, they can feel that tension,” she said. “If the kids go to the grocery store with their parents they see all these people in masks — everything in their whole world is different.”

“The grant process in Minnesota has been broken for many years." 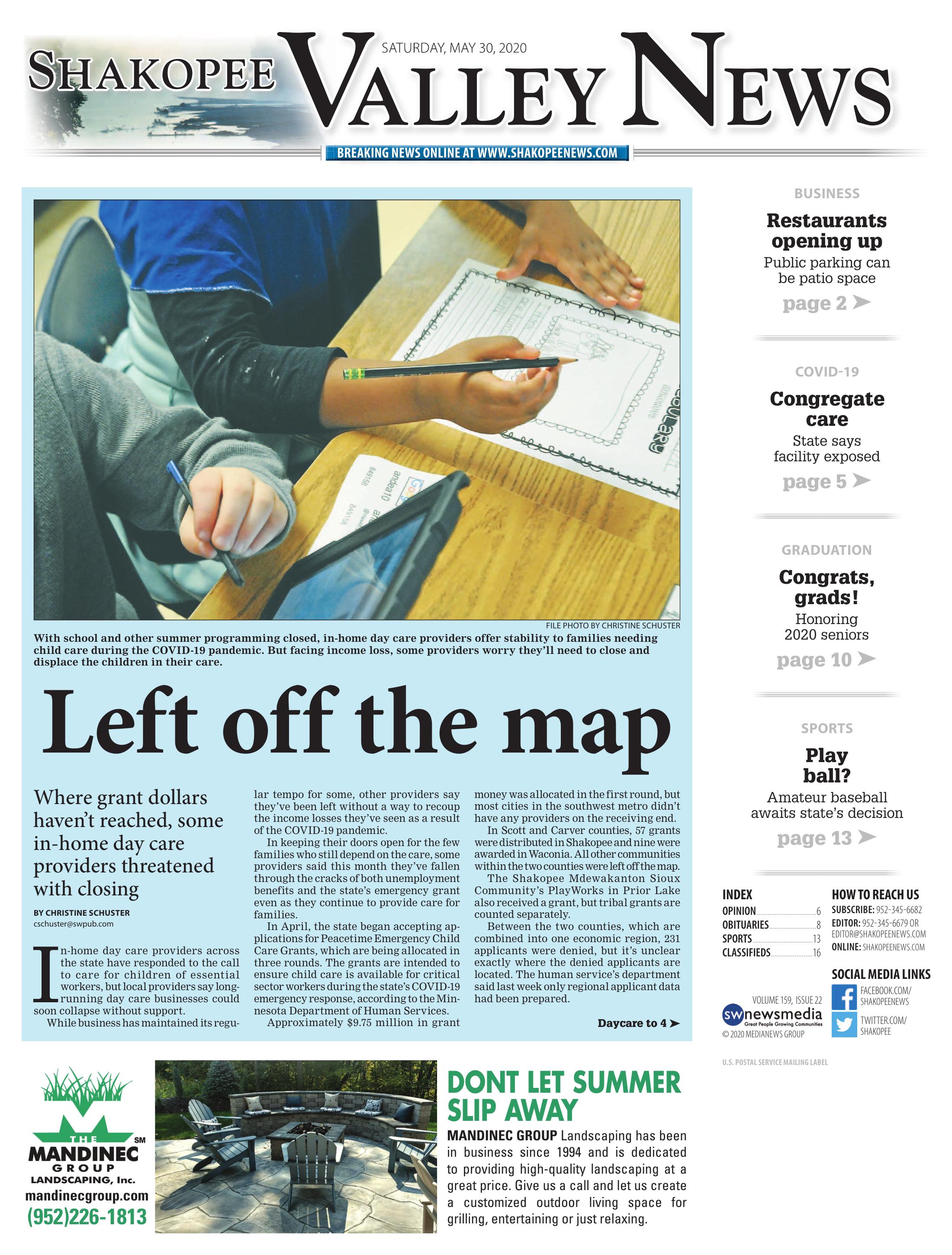