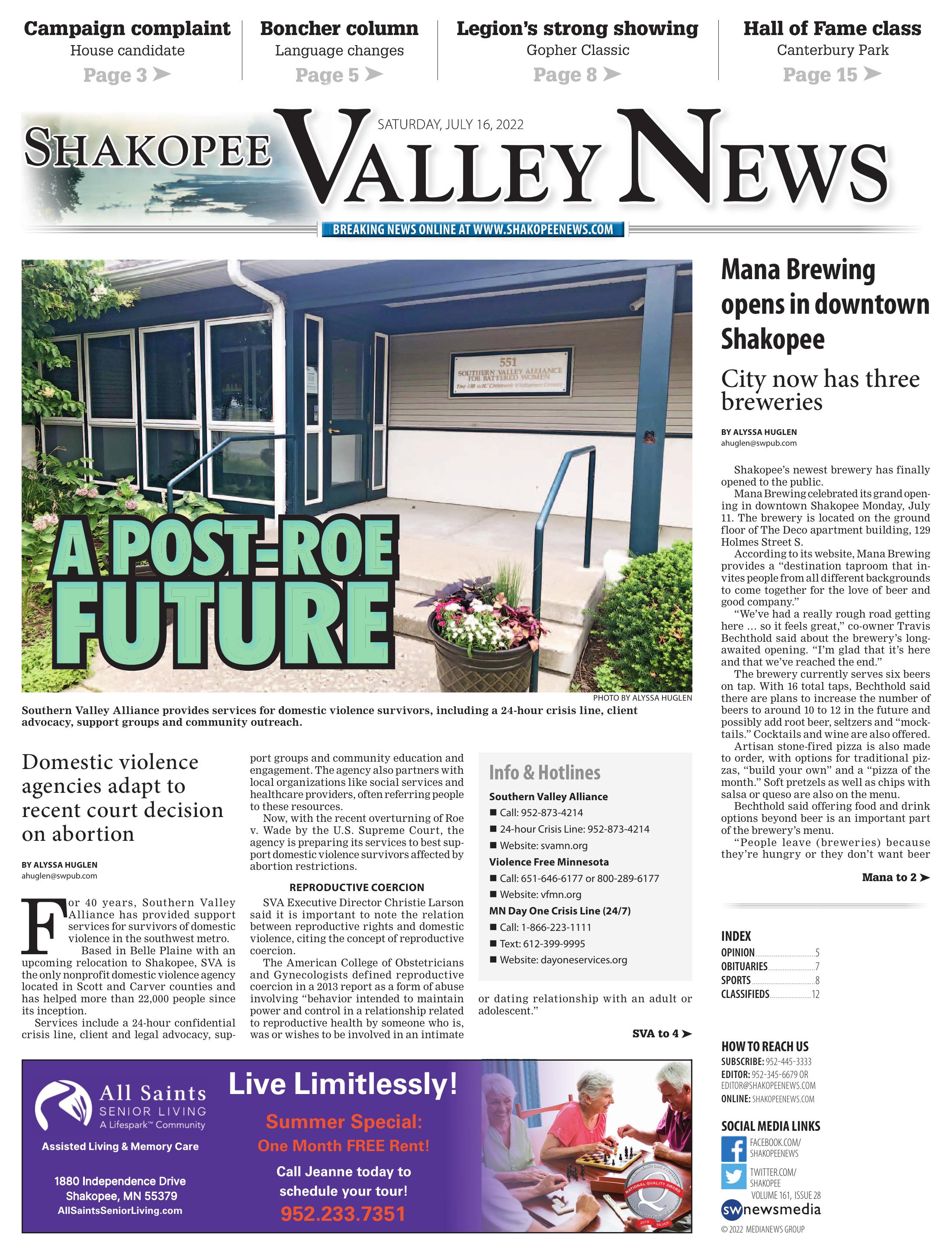 Christie Larson, the executive director of Southern Valley Alliance, stands at the agency’s booth during the Scott County Fair.

Southern Valley Alliance has been serving domestic violence survivors in Scott and Carver counties for 40 years.

For 40 years, Southern Valley Alliance has provided support services for survivors of domestic violence in the southwest metro.

Based in Belle Plaine with an upcoming relocation to Shakopee, SVA is the only nonprofit domestic violence agency located in Scott and Carver counties and has helped more than 22,000 people since its inception.

Now, with the recent overturning of Roe v. Wade by the U.S. Supreme Court, the agency is preparing its services to best support domestic violence survivors affected by abortion restrictions.

SVA Executive Director Christie Larson said it is important to note the relation between reproductive rights and domestic violence, citing the concept of reproductive coercion.

The American College of Obstetricians and Gynecologists defined reproductive coercion in a 2013 report as a form of abuse involving “behavior intended to maintain power and control in a relationship related to reproductive health by someone who is, was or wishes to be involved in an intimate or dating relationship with an adult or adolescent.”

Pregnant people also face an increased risk of experiencing domestic violence. A 2021 report published in Obstetrics & Gynecology concluded homicide is a leading cause of death during pregnancy and the postpartum period in the United States.

Larson added that one in six people who can get pregnant are first abused in pregnancy.

Access to safe abortions weighs heavily on this issue, Larson said, because many domestic violence survivors seeking an abortion are trying to escape being tied to their abuser.

“The physical piece of pregnancy, the emotional piece, the financial piece with having a child all make it a lot more difficult to leave an abuser,” Larson said. “So if you’re tied to them with a child … that reproductive coercion goes back into this form of abuse and is really an abuser’s way to assert their power and control over that victim.”

“This decision has an even larger impact on domestic violence victims for all these reasons,” she said regarding Roe v. Wade’s reversal.

Larson said moving forward, SVA is doing its best to prepare for how this decision will affect survivors — both residents and nonresidents.

While Roe v. Wade’s reversal does not change the right to an abortion in Minnesota, abortion clinics and hospitals are anticipating an influx of out-of-state patients.

“It’s very concerning for us … it’s concerning nationally that these victims are not able to access resources that they need to help them with their safety and keep them safe and stable,” Larson said.

The agency is looking to take a few steps to get ahead of this.

The biggest impact, Larson predicts, will be an increase in calls to the agency’s crisis line. The line is staffed during the week and is volunteer-run overnight.

Only one volunteer staffs the line overnight, but this is now subject to change. “Being able to keep up with that call volume means we’re going to need to have more volunteers and things staffing that crisis line,” Larson said.

Crisis line advocates will also need to be further trained on the services SVA can give or refer survivors to, regardless of their residency.

Another necessary step, Larson said, is to highlight the link between domestic violence services and healthcare. “If people are coming to Minnesota for reproductive healthcare, we want to ensure that our healthcare settings know about domestic violence agencies and the services we provide,” she said. “If someone is coming in for reproductive care and the doctor picks up on the fact that there might be some abuse going on, they should know we are here and that they can call.”

The agency plans to continue partnering with healthcare organizations like St. Francis Hospital in Shakopee and local OB-GYN centers, so survivors can be referred to support services that best serve their needs. Referrals can also be made to Planned Parenthood, where Larson said people can receive low-cost care for services counteracting the effects of reproductive coercion, like access to birth control options.

SVA’s transportation services may also grow in the future. Right now, the agency transports people within Scott and Carver counties to safer housing. Regarding the possibility of transportation for those outside their coverage area, Larson said it’s something the agency will have to look at while considering the financial impact.

Similar measures may need to be taken at other domestic violence agencies in Minnesota.

SVA is a member within Violence Free Minnesota, a statewide coalition of over 90 member programs working to end relationship abuse. Founded in 1978, the coalition represents these agencies at the state Capitol and advocates on their behalf to get funding and laws passed that will help domestic violence survivors.

In a June 24 statement, Violence Free Minnesota wrote that the coalition was “outraged and dismayed” by the Supreme Court’s ruling, stating that “access to safe abortions is a matter of safety for victim/survivors of intimate partner violence.”

Joe Shannon, Violence Free Minnesota communications program manager, said he anticipates domestic violence agencies in Minnesota to be impacted by this decision. “If it’s not already, I think Minnesota will definitely be seen in this part of the country as a ‘haven’ for survivors who are facing reproductive injustice and seeking abortions due to the fact that our neighboring states are enacting restrictions,” he said.

Shannon predicts a heavier influx of people at agencies along state borders. He said with many of these agencies located in rural areas, they are already “stretched quite thin” and need additional funding and support.

SVA staff claimed they have never faced a scenario where a person requests funds to cover abortion costs. If this did occur, Floeter said they would likely direct funds to services more in the agency’s wheelhouse and connect survivors to other resources that may better serve this request.

Violence Free Minnesota sought more than $21 million in funding from the state legislature earlier this year, Shannon said, with $12.5 million in FY23 and $8.75 million in FY24. This funding would have been used among agencies for resources like emergency shelter and housing, transportation, 24-hour crisis lines and increased staffing.

The coalition was not granted any funding from this ask.

“It’s a major disappointment,” Shannon said. “This is money that would help survivors and could save lives.”

Violence Free Minnesota is also in the beginning stages of advocacy work post-Roe v. Wade. The coalition met this week with other statewide coalitions against violence. The goal of forming this “coalition of coalitions,” Shannon said, is to figure out how to best advocate for domestic violence survivors.

While agencies are in the early stages of navigating care post-Roe v. Wade, Floeter said SVA is still standing as a resource for any survivor of domestic violence. “We’re here. We believe them. They don’t have to be worried about our beliefs — we’re here to support them in any way,” she said.

Shakopee’s newest brewery has finally opened to the public.

According to its website, Mana Brewing provides a “destination taproom that invites people from all different backgrounds to come together for the love of beer and good company.”

“We’ve had a really rough road getting here … so it feels great,” co-owner Travis Bechthold said about the brewery’s long-awaited opening. “I’m glad that it’s here and that we’ve reached the end.”

The brewery currently serves six beers on tap. With 16 total taps, Bechthold said there are plans to increase the number of beers to around 10 to 12 in the future and possibly add root beer, seltzers and “mocktails.” Cocktails and wine are also offered.

Artisan stone-fired pizza is also made to order, with options for traditional pizzas, “build your own” and a “pizza of the month.” Soft pretzels as well as chips with salsa or queso are also on the menu.

Bechthold said offering food and drink options beyond beer is an important part of the brewery’s menu.

“People leave (breweries) because they’re hungry or they don’t want beer anymore,” he said. “We offer the cocktails, the non-alcoholic stuff, pizza, pretzels … it caters to a wider audience instead of just the beer drinkers.”

He added that in the future, the brewery hopes to add more food options like salads and charcuterie boards.

Developing Mana Brewing has been a long time coming, Bechthold said, with the first ideas conceived in February 2018. The brewery was initially expected to be located in Prior Lake, but the pandemic shifted plans.

Once restrictions eased up, Bechthold said the team resumed work on bringing the brewery plans to fruition. He and his wife Brittney looked at a couple of spaces in Shakopee before deciding on the downtown Shakopee location.

“We chose Shakopee for our location for two reasons,” Mana Brewing states on its website. “The first being a high-growth, booming area; secondly, because we love this area, are proud to call it home and want to engage in our community.”

The Bechtholds are Prior Lake residents, as is co-owner James Lee. Co-owner Bob Miller is from Monticello.

This is the third brewery in town, adding to Shakopee Brewhall and Badger Hill Brewing.

“Mana Brewing’s opening is another wonderful opportunity for downtown Shakopee and the entire Shakopee area, from a resident and visitor standpoint,” Shakopee Chamber President Tim Zunker wrote in a prepared statement to Southwest News Media.

“We already have two wonderful breweries in Shakopee with Badger Hill and Shakopee Brewhall, and having Mana will only help bolster the options of venues to visit in our region,” he added. “The continued development in Shakopee goes to show that we are a community on the rise.”