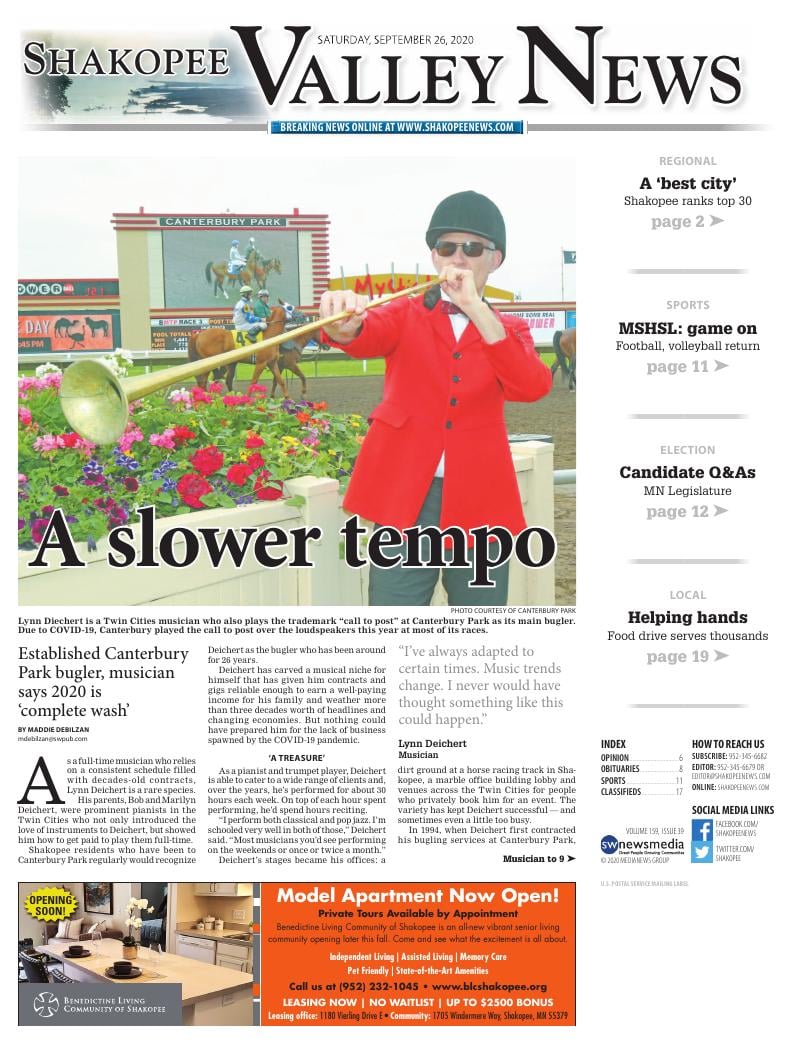 Lynn Diechert is a Twin Cities musician who also plays the trademark “call to post” at Canterbury Park as its main bugler. Due to COVID-19, Canterbury played the call to post over the loudspeakers this year at most of its races.

Lynn Deichert, a Twin Cities musician who also plays the trademark “call to post” at Canterbury Park as its main bugler, plays the piano at the Colonnade office building in Golden Valley Sept. 23. The gig is his only consistent performance during COVID-19.

As a full-time musician who relies on a consistent schedule filled with decades-old contracts, Lynn Deichert is a rare species.

His parents, Bob and Marilyn Deichert, were prominent pianists in the Twin Cities who not only introduced the love of instruments to Deichert, but showed him how to get paid to play them full-time.

Shakopee residents who have been to Canterbury Park regularly would recognize Deichert as the bugler who has been around for 26 years.

Deichert has carved a musical niche for himself that has given him contracts and gigs reliable enough to earn a well-paying income for his family and weather more than three decades worth of headlines and changing economies. But nothing could have prepared him for the lack of business spawned by the COVID-19 pandemic.

As a pianist and trumpet player, Deichert is able to cater to a wide range of clients and, over the years, he’s performed for about 30 hours each week. On top of each hour spent performing, he’d spend hours reciting.

“I perform both classical and pop jazz. I’m schooled very well in both of those,” Deichert said. “Most musicians you’d see performing on the weekends or once or twice a month.”

Deichert’s stages became his offices: a dirt ground at a horse racing track in Shakopee, a marble office building lobby and venues across the Twin Cities for people who privately book him for an event. The variety has kept Deichert successful — and sometimes even a little too busy.

In 1994, when Deichert first contracted his bugling services at Canterbury Park, he only played the call to post a handful of times. Most of the time, Deichert sent other buglers to play under his contract. Now, about 60 musicians play under contract for Deichert’s numerous clients when he is unable to make it.

Canterbury is one of few regional tracks to continue the tradition of live bugling. CEO Randy Sampson has made live bugling a priority, Deichert said. Now, regular fans recognize Deichert in his red costume and often ask to take photos with the trademark Canterbury face.

“He can play that bugle in a downpour and still have a smile on his face,” Canterbury spokesman Jeff Maday said of Deichert. “He really is a treasure.”

This year, like most event venues, Canterbury Park faced financial difficulties due to limited guests allowed to attend each race, and live bugling didn’t shake out as one of the services needed to keep the track running.

So instead of Deichert’s trademark call to post, emerging from the winner’s circle wearing his traditional red suitcoat and black cap, the park played this year’s call to post over the loudspeakers, and Deichert stayed in his Golden Valley home, practicing when he’d normally be performing.

Deichert never got into playing at many restaurants in the area. The restaurant industry is too unstable, he said, and most restaurants can scant afford live musicians. Playing at restaurants isn’t as lucrative as playing at commercial buildings. So that was one of the niches he carved.

Deichert contracts with retailers like Lunds and Byerlys who want live music in a store for special occasions, such as the holiday season. He plays at country clubs like Interlachen in Edina, churches and office buildings. And when he can’t play himself, he facilitates a gig for one of his 60 musicians.

Though Deichert is uniquely business-minded as a leader in the Twin Cities music industry, he never could have prepared for the 2020 challenges.

“I’ve always adapted to certain times. Music trends change,” Deichert said. “I never would have thought something like this could happen.”

Almost all of Deichert’s performing contracts have been put on hold due to COVID-19, and he said he wouldn’t be surprised if it remained this way until next fall.

“Live music is what you’d call a nonessential,” Deichert said. “Think about the restaurant industry, or Canterbury Park. Think about the concessions, the admissions, and how much less they’re bringing in.”

The pandemic wiped out all but one of Deichert’s performance gigs. He still plays the piano at an office building lobby in Golden Valley from 7 a.m. to 9 a.m. during the week. He also has retained his job as an adjunct music professor at Carleton College.

His lunchtime-hour gig at the Moneygram office building in St. Louis Park has been put on hold because there are so few tenants coming to work, he said.

Canterbury Park was a four-day-a-week gig in the summers.

“That alone is 65 to 66 days each year that I’m not performing,” he said. “I’m hardly performing at all, and I make a living as a performer.”

Though Deichert is in his 60s and has done well enough throughout his career to not have to worry about his finances this year, he said he does worry about younger musicians or those who aren’t established enough in the field to absorb the COVID-19 blow.

“Hopefully younger musicians have government assistance or parental assistance,” he said. “I do think (this year is) a complete wash. The music business is different even than restaurants. Full-time musicians aren’t getting health insurance or other benefits.”

Deichert said he wonders what the long-term impacts of the pandemic will have on live music performances, and performers. using church as an example. Many church performances, he said, have been eliminated and moved to live streaming. The Minnesota Orchestra has cancelled their season through at least December, and they have 90 musicians.

“I have come to terms with COVID. This is what it is,” he said. “I’m just thinking about the next year, and how I’m going to push forward.”

As for Canterbury Park, Deichert said he’s already looking forward to next year, when he will (hopefully) return to the winner’s circle with his 19th-century English bugle and take selfies with fans.

“I’ve always adapted to certain times. Music trends change. I never would have thought something like this could happen.” 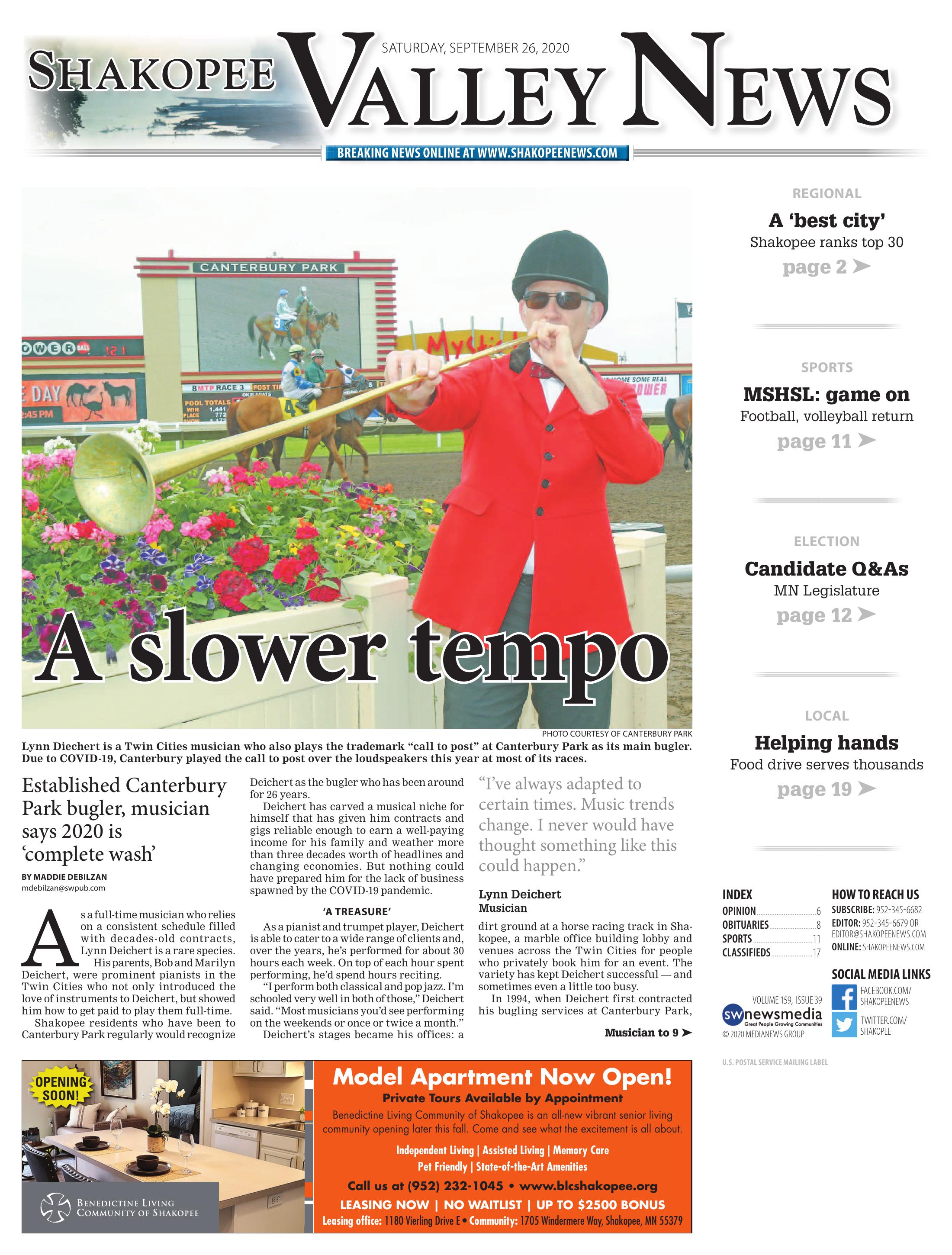