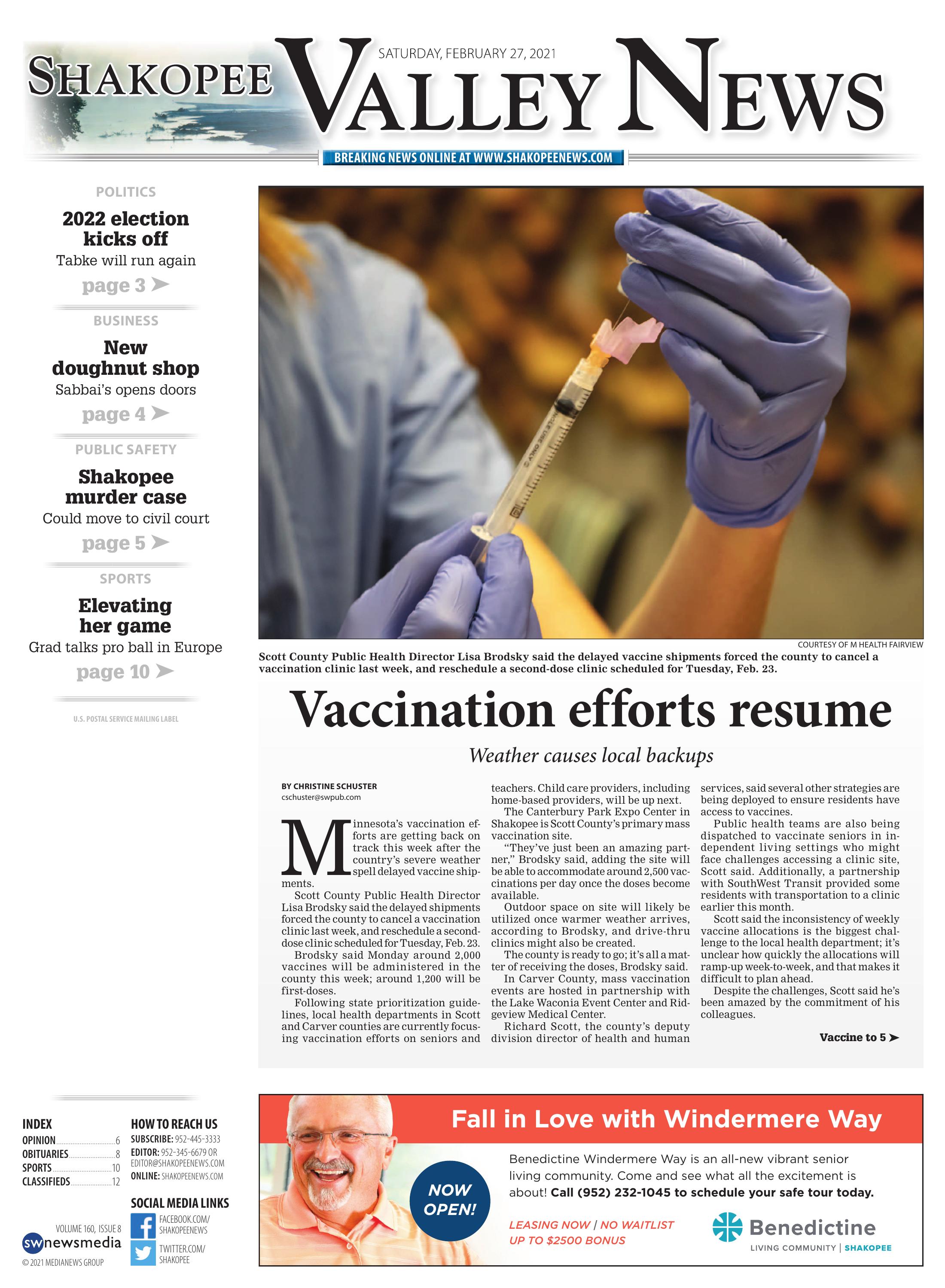 Minnesota’s vaccination efforts are getting back on track this week after the country’s severe weather spell delayed vaccine shipments.

Brodsky said Monday around 2,000 vaccines will be administered in the county this week; around 1,200 will be first-doses.

Following state prioritization guidelines, local health departments in Scott and Carver counties are currently focusing vaccination efforts on seniors and teachers. Child care providers, including home-based providers, will be up next.

“They’ve just been an amazing partner,” Brodsky said, adding the site will be able to accommodate around 2,500 vaccinations per day once the doses become available.

Outdoor space on site will likely be utilized once warmer weather arrives, according to Brodsky, and drive-thru clinics might also be created.

The county is ready to go; it’s all a matter of receiving the doses, Brodsky said.

In Carver County, mass vaccination events are hosted in partnership with the Lake Waconia Event Center and Ridgeview Medical Center.

Richard Scott, the county’s deputy division director of health and human services, said several other strategies are being deployed to ensure residents have access to vaccines.

Public health teams are also being dispatched to vaccinate seniors in independent living settings who might face challenges accessing a clinic site, Scott said. Additionally, a partnership with SouthWest Transit provided some residents with transportation to a clinic earlier this month.

Scott said the inconsistency of weekly vaccine allocations is the biggest challenge to the local health department; it’s unclear how quickly the allocations will ramp-up week-to-week, and that makes it difficult to plan ahead.

Despite the challenges, Scott said he’s been amazed by the commitment of his colleagues.

“From my knowledge, we have not wasted a single shot, and that’s really amazing,” he said.

Nearly 11% of Scott County residents and nearly 14% of Carver County residents have received at least one vaccine dose. Approximately 5% have completed the two-dose series in both counties.

Minnesota’s statewide trends have improved significantly since November’s surge, but some regions are beginning to show warning signs of becoming a hotspot, state health officials said this week.

Cases are accelerating in the south-central and northwest regions of the state, Minnesota Department of Health Commissioner Dan Huff said during a press conference Wednesday.

State health officials are now asking families with children attending school or other activities to seek testing every two weeks to help protect the progress Minnesotans have made.

“We have it within our power to stamp out COVID in our state,” Huff said, adding Minnesota’s free testing infrastructure is the best in the nation.

Kris Ehresmann, the state’s director of infectious disease epidemiology, said she expects the one-dose Johnson & Johnson vaccine to become available to Minnesotans sometime in the “near-term.”

Over half a million Americans have died of COVID-19, the John Hopkins University’s Coronavirus Resource Center reported Monday.

More COVID-19 deaths have been reported in the U.S. than any other nation on the globe.

The nation’s pandemic death toll now stands higher than the death toll recorded in World War I, World War II and the Vietnam War combined, Biden said before holding a candle-lighting ceremony and moment of silence.