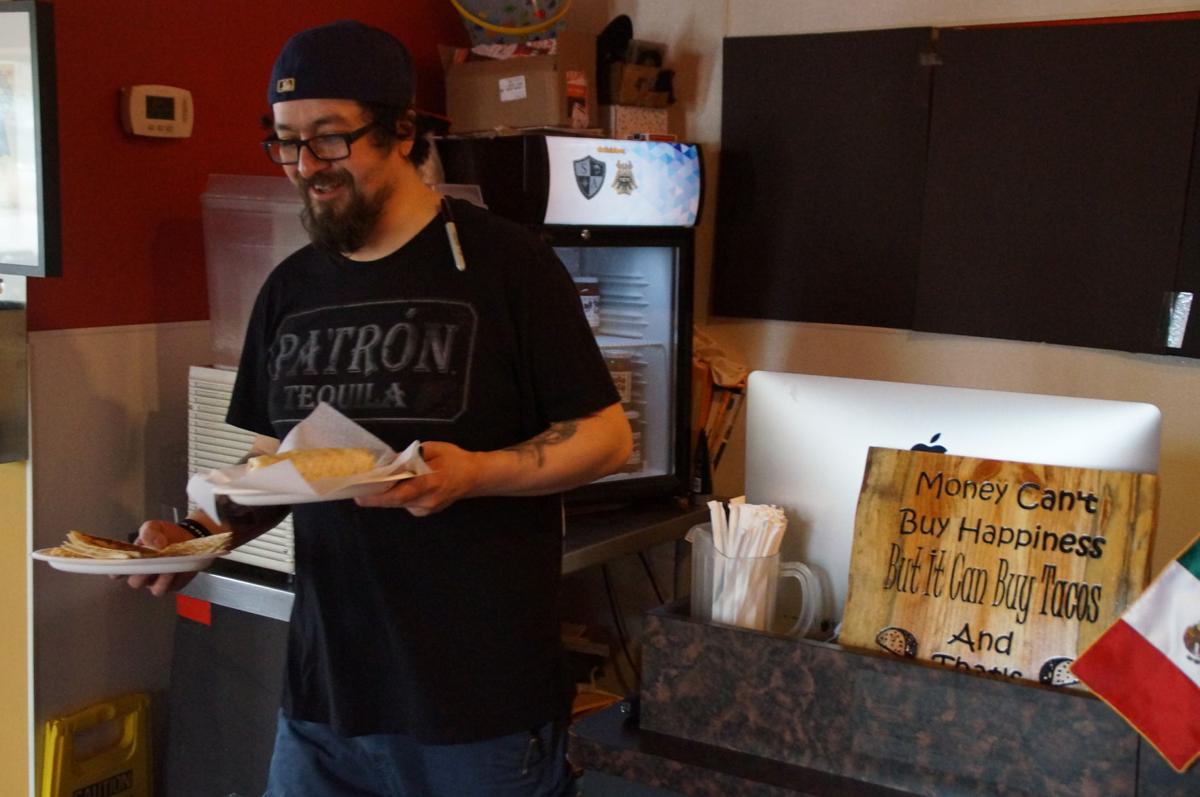 Taco Loco owner Josue Mendez, who runs the restaurant with his brother Constantino Mendez, and his mother Irma Mendez, serves a customer on April 28 just hours before the restaurant closed its doors after 18 years in Shakopee. 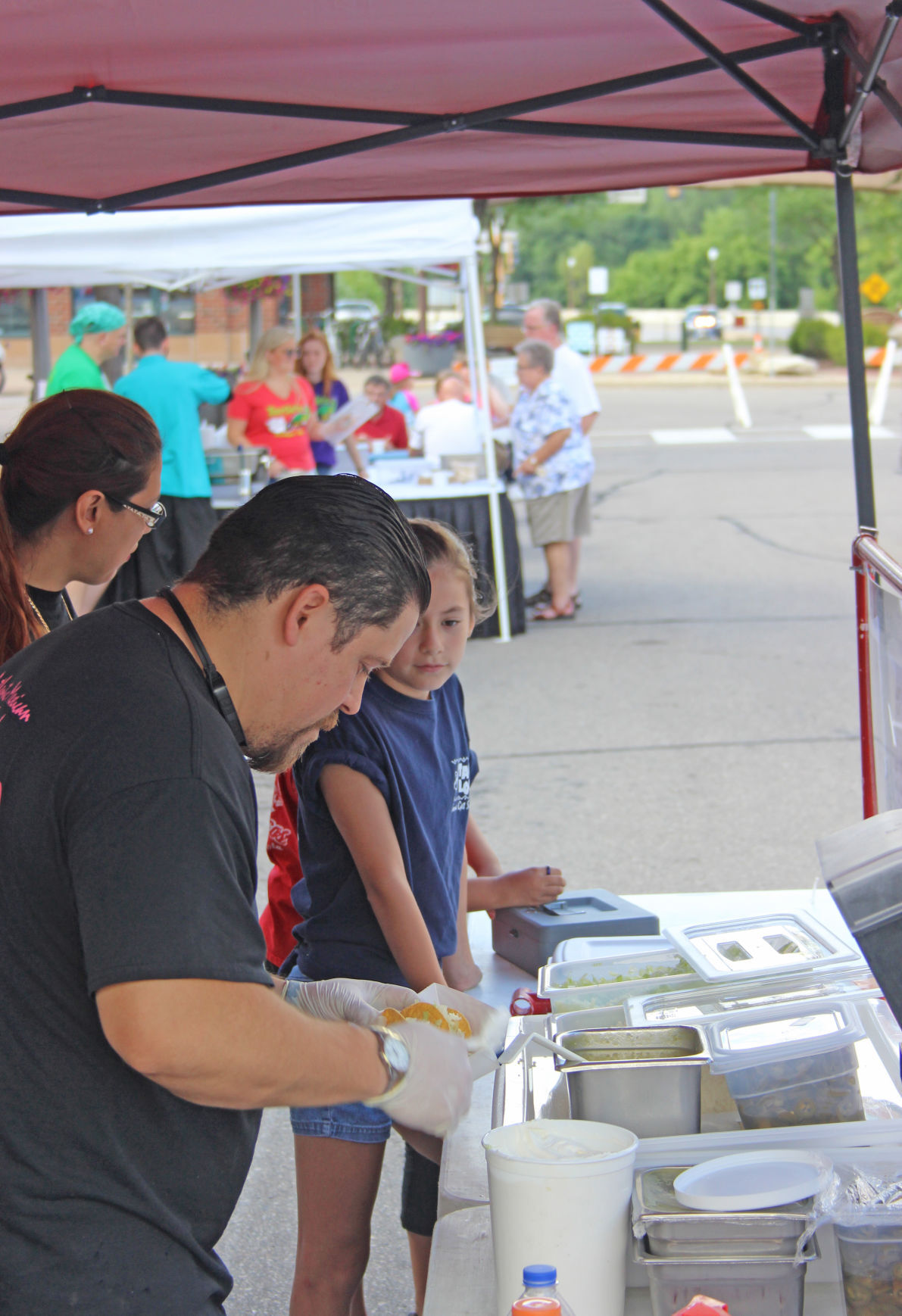 Aurelio Mendez, the former owner of Taco Laco who died in March 2020, served up a taco alongside his wife, Maria, and daughter, Jessica at the Taste of Shakopee in 2016. Taco Loco closed its doors on April 28. 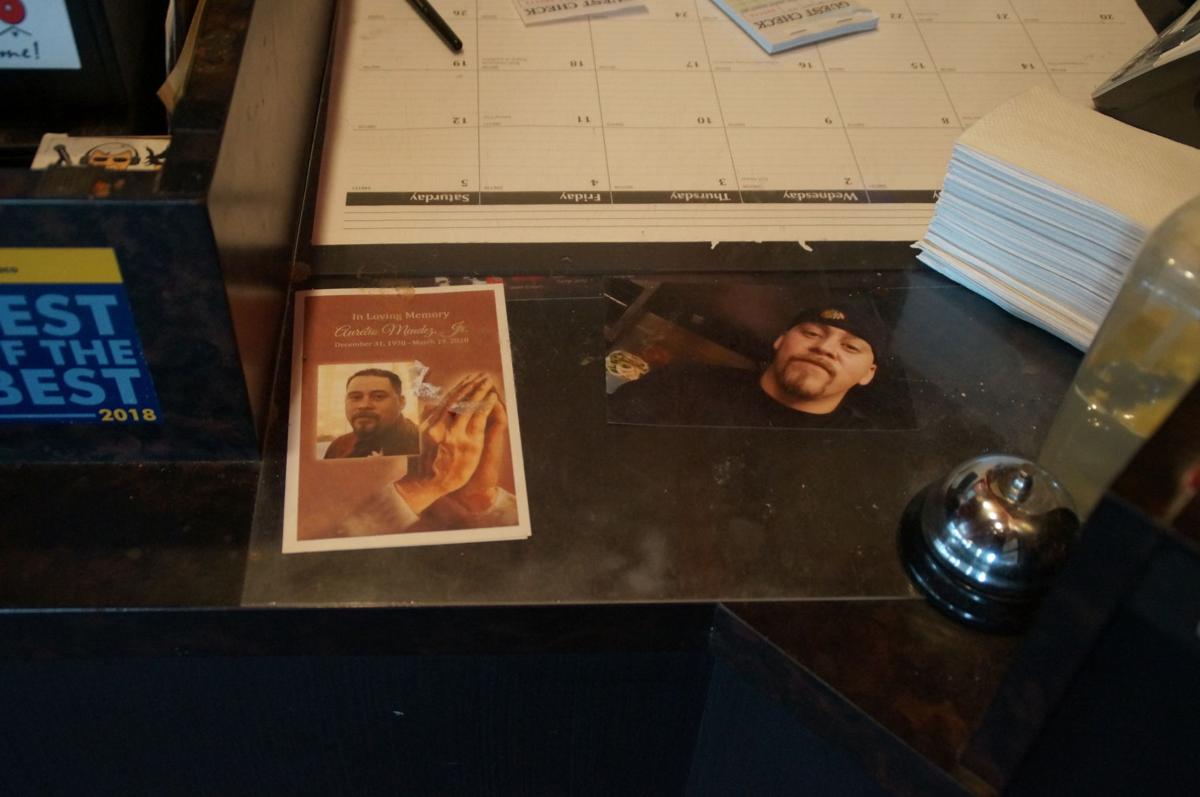 Photos of Aurelio Mendez, Jr., were on display at Taco Loco, which closed on April 28 following the death of Aurelio and the inability for the restaurant to recover from the pandemic.

Taco Loco owner Josue Mendez, who runs the restaurant with his brother Constantino Mendez, and his mother Irma Mendez, serves a customer on April 28 just hours before the restaurant closed its doors after 18 years in Shakopee.

Aurelio Mendez, the former owner of Taco Laco who died in March 2020, served up a taco alongside his wife, Maria, and daughter, Jessica at the Taste of Shakopee in 2016. Taco Loco closed its doors on April 28.

Photos of Aurelio Mendez, Jr., were on display at Taco Loco, which closed on April 28 following the death of Aurelio and the inability for the restaurant to recover from the pandemic.

On April 28, the dining room at Taco Loco was somber. A customer said goodbye to co-owner and manager Josue Mendez, thanking him for the time he’s spent in town. The dining room was full of customers wanting to enjoy the Mexican food for the last time. Cars filled the parking lot of a building off County Road 101 in Shakopee, and unless you knew the area, you’d probably miss the taco restaurant with the discreet sign.

Josue Mendez, who wore a black “cancer sucks” bracelet, hurried between helping customers behind the counter to preparing their food in the kitchen. It was the last day he’d pull into the restaurant like he did every morning to greet the faces of the customers he almost always recognized and oftentimes knew by name and lunch order.

In April, Taco Loco — which has been a Shakopee Mexican food staple for the past 18 years — announced its closure on Facebook. The post garnered nearly 200 shares and hundreds of comments from heartbroken customers, many of whom said it served some of their favorite food.

For customers, the restaurant’s closure is the end of an era.

The food was worth crossing the river for, said Bloomington resident and regular customer Shawn Dykhoff, who said he’s been dining at Taco Loco ever since he happened across the restaurant when he got his oil changed across the street 11 years ago. He’s not just a patron when he happens to be in the area. He frequents the taco joint at least three times each week.

“What am I going to do now?” he said. “I’ve tried other places. There are no tacos like this anywhere.”

Dykhoff handed Josue a $20 bill on April 23, without even saying his order. Josue already knew it would be three of the soft tacos al pastor.

“Sometimes I’ll change it up,” Dykhoff said. “Not very often, though.”

In 1999, Aurelio Mendez Sr., and his wife Irma, immigrants from opposite ends of Mexico who both came to the United States as teenagers for work, were operating a Mexican restaurant in Chicago when a friend from Minnesota tried their food and encouraged them to consider moving to Minnesota.

After scouting out the Twin Cities, the family returned home to pack up their bags with three of their six sons and moved to Minnesota, where they originally opened up Mexican restaurants in Glencoe and Hutchinson.

The restaurants worked for a while, Josue said, but “you’re out in the country and they don’t know a lot about authentic food… so the demographics didn’t really fit what we had to offer.”

The Mendez family decided to give their Mexican restaurant one last shot. They poured what was left of their money into a vacant Dairy Queen off County Road 101 in Shakopee, across from Rahr Malting. Josue’s late brother, Aurelio Mendez Jr., quit his day jobs at Lion’s Tap in Eden Prairie and what used to be Paulie’s American Grill in Chaska. Josue put his two weeks notice in at his job in construction.

The old Dairy Queen building was in rough shape, and they didn’t have the money to make it much better.

“We called up plumbers and electricians,” Josue said. “It was one of those deals where we didn’t have a lot of money to pay these guys, but with me being so young, I said once we open, you’re going to get paid, and I’ll hook your employees up with catering food.”

The day the restaurant was scheduled for an inspection to open, Josue said, it was pouring rain outside, and the roof started leaking. They failed inspection the day before they were supposed to open.

“We begged them to come back the next day, and they agreed,” Josue said, chuckling.

Josue and his brothers patched up the hole and flooded the roof for hours that evening until they were sure the leak was fixed. The next day, they passed inspection — and the rest is Shakopee history.

‘I did what I could’

In less than seven years, the family-owned fast-food eatery developed a cult following far beyond Shakopee’s borders — despite opening after the heavy traffic went away with the U.S. Highway 169 bypass.

Initially, Taco Loco was open 24 hours a day, and the four Mendez brothers — Noe, Josue, Tino and Aurelio Jr. — took 12-hour shifts. The restaurant took off solely by word-of-mouth. Customers often told the brothers that so-and-so told them about the restaurant, Josue said.

Aurelio Mendez, Sr., the family patriarch, died in March 2007 from a diabetic coma while in the hospital with pneumonia. Josue said his father was the leader of the restaurant, with a vision for what he wanted it to become. When he passed, someone needed to step up and take over his responsibility.

Josue ‘s brother, Aurelio, took the reins on the restaurant after their father passed. Josue credits his brother for grounding Taco Loco to the community, and vice versa.

“He was our leader, and he led by example,” Josue said. “When my dad passed, he led us. His vision of what we were and what we were trying to do played out from 2007 to when he passed.”

Taco Loco supported the Mendez brothers’ mother Irma, the four youngest of the Mendez sons and their four children. It’s what Josue’s father always wanted for his family.

Josue said when anyone reached out to the restaurant regarding school fundraisers, sponsorships or donations, his brother never turned anyone away.

In 2019 Aurelio, or Junior, was diagnosed with adrenal cancer.

“When my brother was sick, he got the same love he gave to the community back from the community,” Josue said. People from around the region who heard about the beloved business owner showed support. A GoFundMe page raised more than $7,000 for the family.

The loss of Josue’s brother combined with the hit the restaurant took from the pandemic are the main reasons why the business needs to take a step back, he said.

“I got thrown into this situation when my brother got sick,” Josue said. “I wasn’t 100% ready to take over. I did what I could with what I had.”

“The plan is to stay in Shakopee, but as you know, plans don’t always go accordingly,” he said.

Josue said he and his brother Constantino Mendez, along with their mother Irma, are considering getting a food truck, trailer or even a smaller building, so the regulars won’t have to live without their favorite Mexican food for too long. He’s hoping to start making those plans in the next six months, though he said there is no set timeline.

“We embrace people like family. We spoil kids with treats, high-five them. A lot of these kids, they remember us,” Josue said. “Now they’re growing up and they’re teenagers in high school, or they’re getting married, so it’s been a pleasure to witness that.”