Devi James, owner of Scrapbusters, a local Shakopee business, always dreamed of being successful in the workplace. 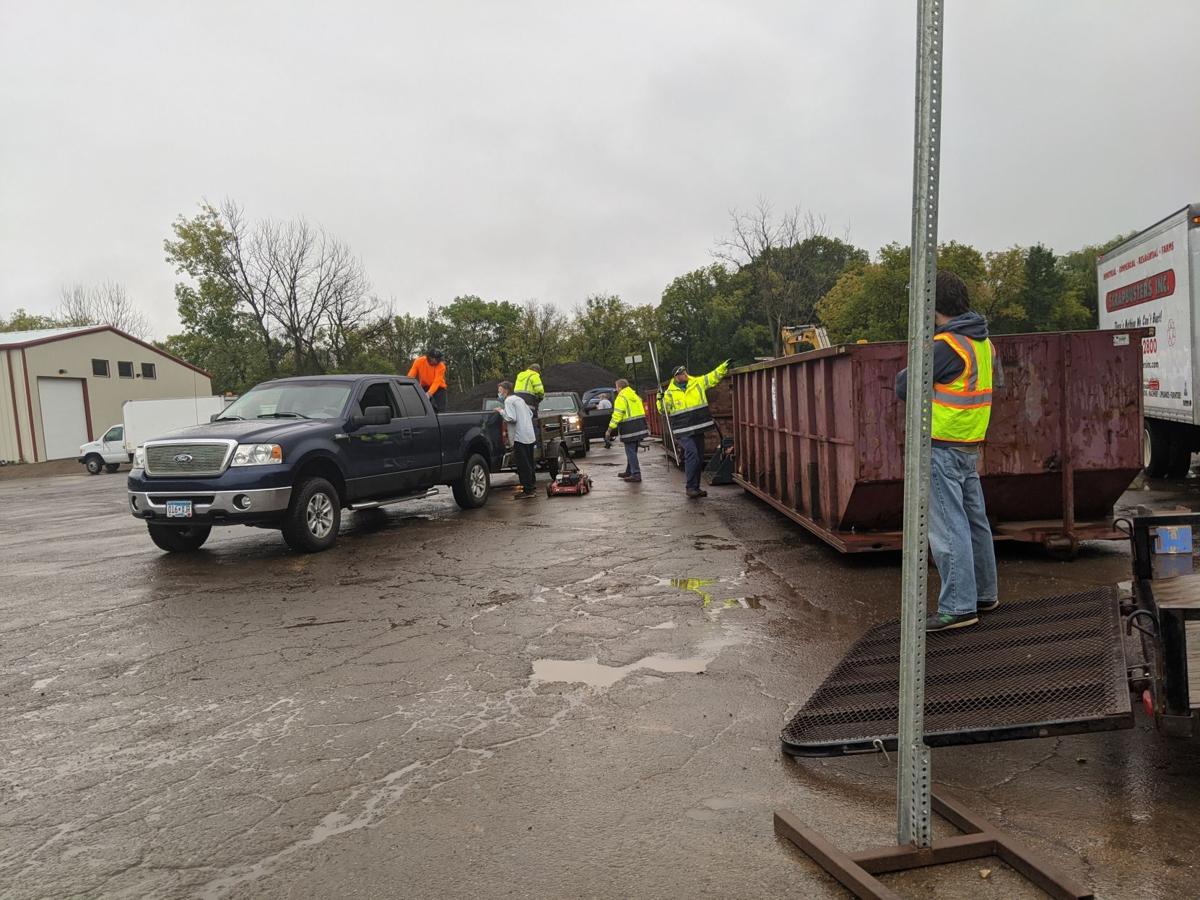 Devi James, owner of Scrapbusters, a local Shakopee business, always dreamed of being successful in the workplace.

When Devi James moved from her home country of Guyana to Queens, New York as a 17-year-old, she could no longer crack the windows open in January to smell the sea.

It was a trade off she’d come to accept, because in Guyana with the sea in her backyard, the waves taunted her. As a girl, she wasn’t supposed to swim in them.

In Guyana, a South American country off the coast of the Caribbean, the women took care of the children and the house, and often were arranged to be married before their 20th birthday.

But James, who graduated from high school at the top of her class, dreamed of becoming a lawyer.

“In my culture, they don’t like girls to go away from home,” James said. “In the city, you get all this newfound freedom, and they didn’t like what women did with that freedom.”

But James has small business ownership in her blood.

James’ great-grandparents were first-generation Indians who came to Guyana as indentured immigrants.

Almost all the men in her family owned small businesses in her home country. Her father owns a wholesale grocery business. Her two brothers own a trucking company. Her grandfather owned a grocery shop.

Moving to the big city

When James was a teenager, her mother scraped together money by selling ice, since most people didn’t have refrigerators. She bought James a one-way ticket to New York City.

“My mom always said she wanted me to go to a university and not just go to college and be a housewife,” James said. “She wishes she had the opportunity to be more on her own and be independent.”

James’ uncle, who lived in Queens, sent a letter to the U.S. embassy on his niece’s behalf, and she attained a visa. It was decided — she would move to the United States and climb corporate ladders and wear business suits and have a college degree.

James arrived in New York City — the first time she’d ever been outside her country — as a wide-eyed 17-year-old girl fresh out of high school.

James was watching “Regis and Kelly” from her living room in Queens when the World Trade Center twin towers collapsed, just two weeks after she arrived in the country.

Her cousin’s fiance, who lived with them in Queens and worked near the twin towers, didn’t get home until the next day because he had to walk across the Brooklyn Bridge. He was covered in soot when he walked through the front door on Sept. 12, 2001, and he didn’t get up from the couch for the next two days.

“I didn’t understand or have the experience to grasp what was happening,” James said. “I was only 17 then.”

That fall, James started taking general classes at York College in Queens. She met her husband Wilfred, a Minnesota resident who is also from Guyana, through relatives, and they married after a couple of years dating long-distance. James moved to Minnesota in 2003, where she finished her general classes at Normandale Community College and spent five years working a full-time night job as a semiconductor technician.

By 2010, James had graduated from St. Thomas University with a degree in business and accounting. She spent a few years in real estate accounting until, in 2012, she asked her husband what he thought about owning a business. That’s when they came across a small construction business called Scrapbusters in Elko New Market.

“When you come from another country, people graduate and keep climbing the corporate ladder,” James said. “That was my dream.”

In 2015, as a new mom, James quit her job in real estate accounting and took over the business on her own. They depleted their savings account to invest everything into the company.

“Small business owners are risky people. You take risks. So we just went for it,” James said. “But at the beginning I thought for three years it was a mistake.”

James saw a flyer in the mail from Women Venture, which helps women build profitable and sustainable businesses and has provided more than 105,000 women with tools and resources to achieve economic success, according to the nonprofit.

James joined a cohort with nine other women-owned businesses.

“I was a new mom and I took a class, and it helped me understand the business from a new perspective,” James said.

When James and her husband, Wilfred James, first bought the company, Scrapbusters only did boiler demolitions. They knew there could be other services they could offer similar to it. So they started to offer sheet metal demolition, then piping demolitions for things like big school renovations, then junk removal services and dumpster rentals.

The couple said when they decided James would take the reins on the company, they did so thinking they might be able to get more government contracts with a minority woman at the helm. Neither partner regrets that decision, her husband said, adding James is a “natural” at owning the business. She’s carved a niche for herself in that world, he said, though they both operate as a team and he’s available when she needs help.

Wilfred James said his wife’s ability to make business-minded decisions is in her blood.

“I think it came from her upbringing. Her mom is pretty industrial,” Wilfred said. “She does have that in her genes. Plus, she’s very driven. If she says she’ll do something, she’ll do it.”

Scrapbusters has collected all the appliances and electronics for Minneapolis Public Housing for the last three years. In the summer, which is her busy season, there are sometimes 25 employees working on different projects.

Since purchasing the company, Scrapbusters has grown from two to 20 employees and James has carved a niche for herself in the male-dominated construction industry. James’ husband decided to go back into his career as an equipment calibration technician, letting her take the business into whatever direction she saw fit.

“It’s different for a woman to be in construction-related services. People always say, who are you? At the beginning, I was always dreading going to meetings... Now it’s like, they’re going to remember me because I’m the only woman,” James said. “That’s how I built up the client base, because I made the effort to go out to these meetings, and now people are like, that’s Scrapbusters, and that’s Devi.”

Wilfred James also credits his wife’s ability to retain workers as part of the company’s success.

“She’s made it a company where the employees say they want to go to work, versus telling them they need to go to work,” Wilfred James said. “She’s very understanding and I think that is why the employees are so loyal to her. They are very loyal and respectful.”

James is still a mom with homework to correct and kids who pull on her shirt while she’s talking on the phone. During a phone interview in the middle of the afternoon on Nov. 20, her 6-year-old son could be heard in the background, and she excused herself to help him.

“We washed it; you can take a new bowl. Climb in the cupboard if you need to,” James replied.

Being a mom and business owner isn’t easy. Both challenge her in opposite ways. But it’s also the dream James once thought was so far-fetched: wearing multiple hats as a mother and owner of a business in an industry in which she may be the only woman at a meeting.

“Eventually over the past five years, not everything has gone smooth, and there’s good times, the times you cry because you want to give up, and the times when you’re like, are we going to get enough work to last us the winter?” James said. But it’s all worth it.

“I love being a small business owner. I love planning for the next year. I’m already working on next year and what’s going to happen,” she said, adding her business hasn’t been too affected by the COVID-19 pandemic so far.

James spoke on the phone from the Minneapolis-St. Paul airport on her way to Guyana Dec. 1. Her dad has been ill for years, and recently, her family asked that she come see him.

Guyana is different now than it was back when James was 16 years old and dreamed of becoming a lawyer. Now, there are more young women starting their own businesses and getting college degrees. Now, her mother has been running much of her father’s wholesale grocery business while he’s been sick. But 20 years ago, those options weren’t readily available to James, she said.

Two decades ago, women like James’ mother had to be rebellious, creating little ice shops so their daughters could create their own businesses with payrolls and contracts and desktop computers.

“Small business owners are risky people. You take risks. So we just went for it. But at the beginning I thought for three years it was a mistake.”