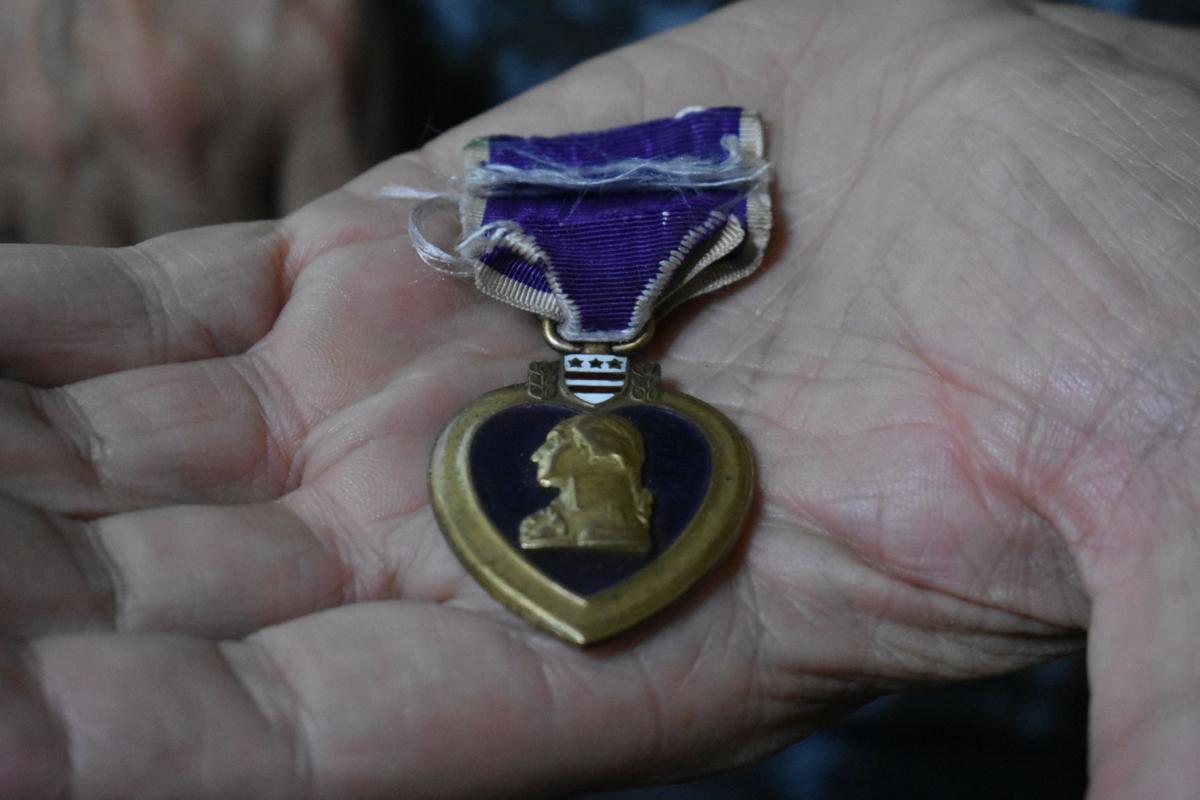 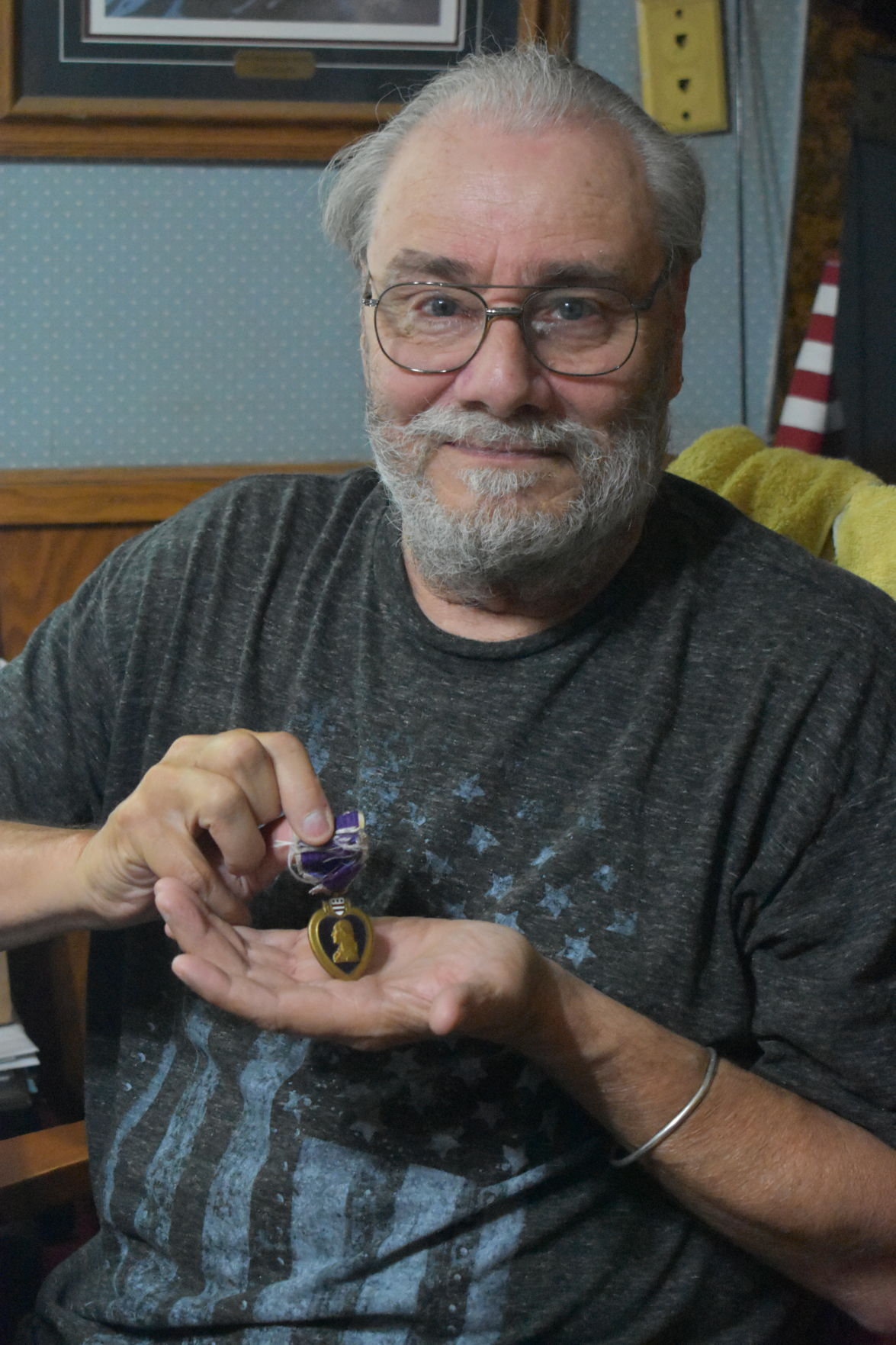 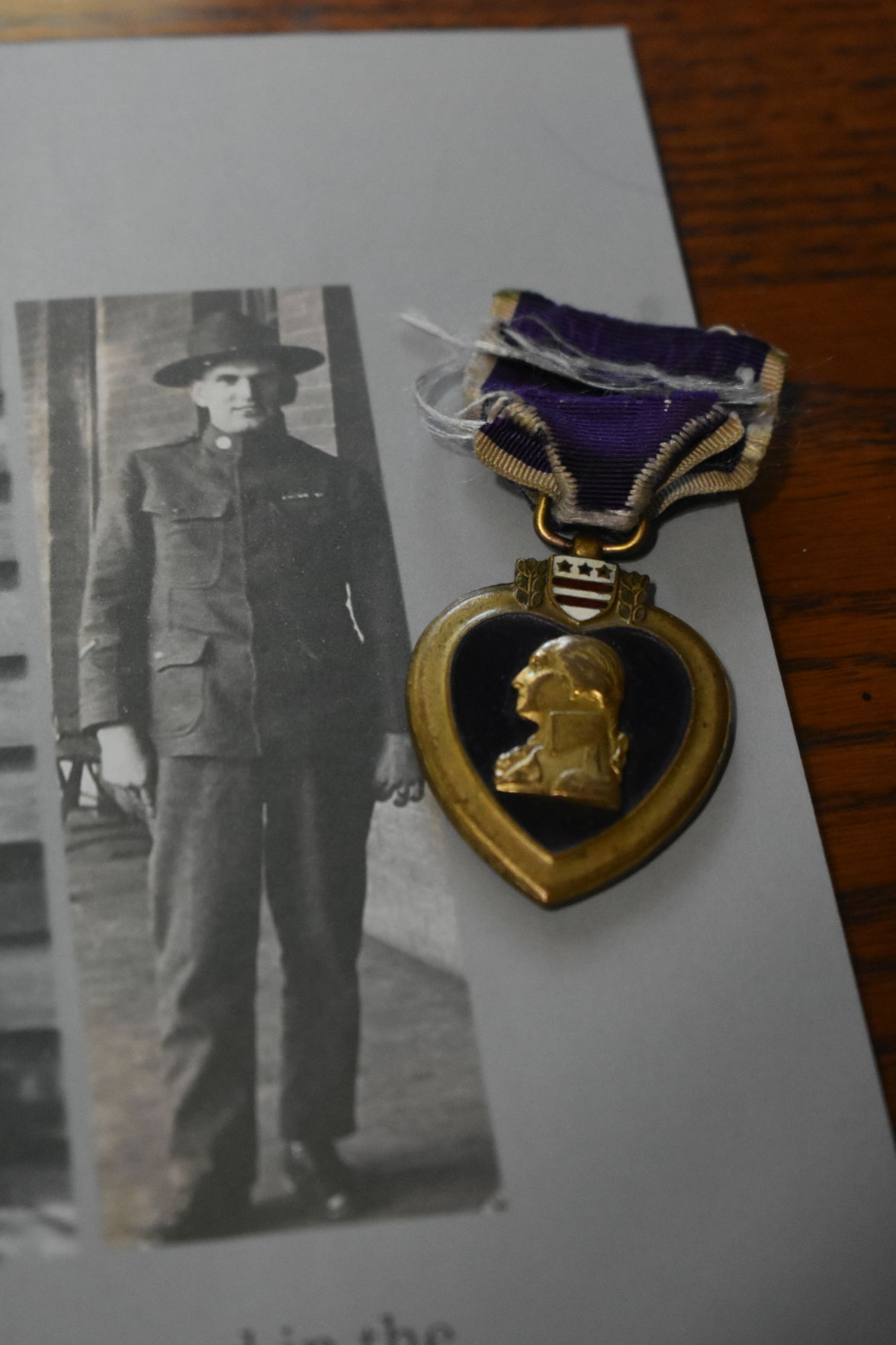 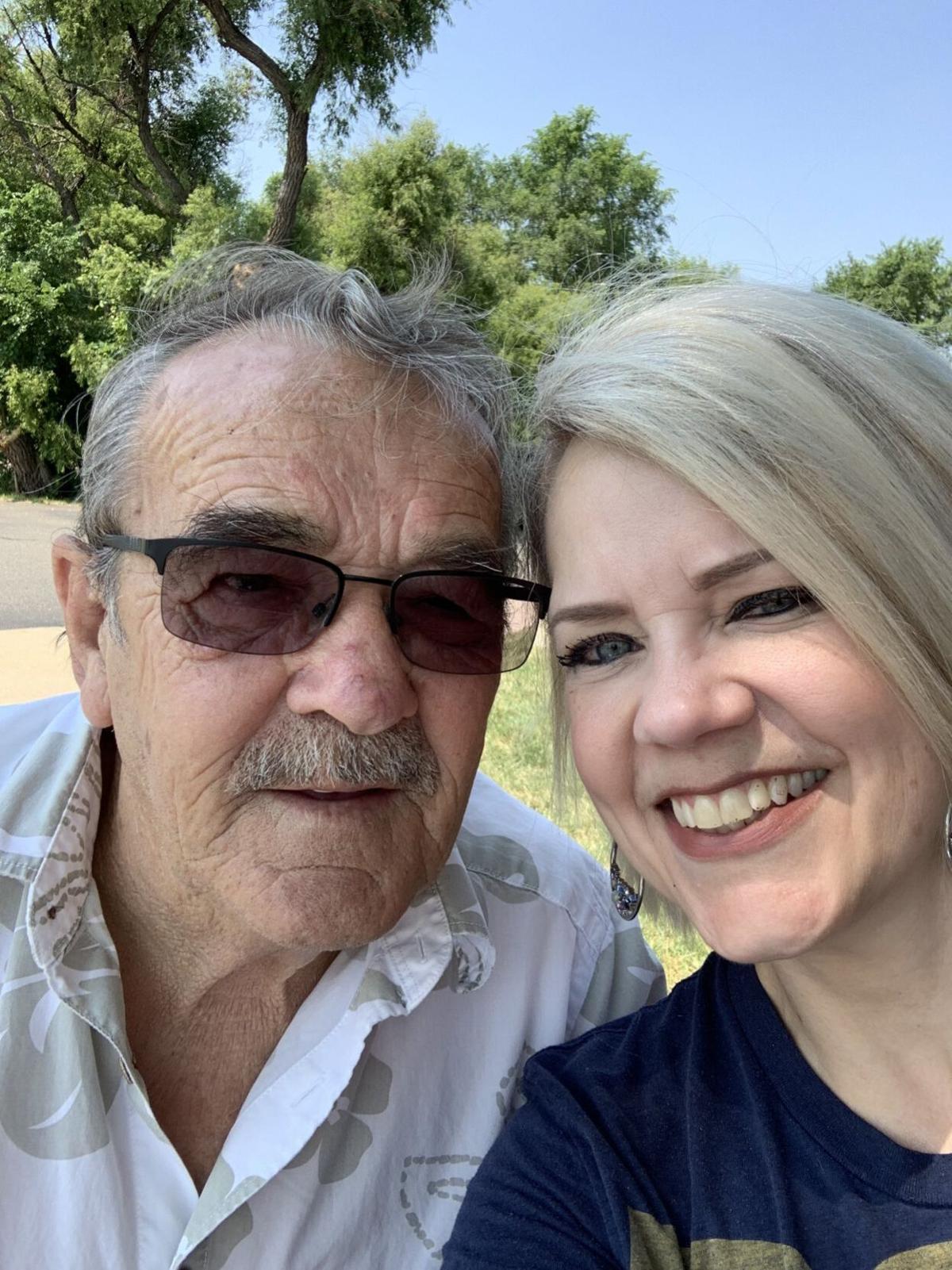 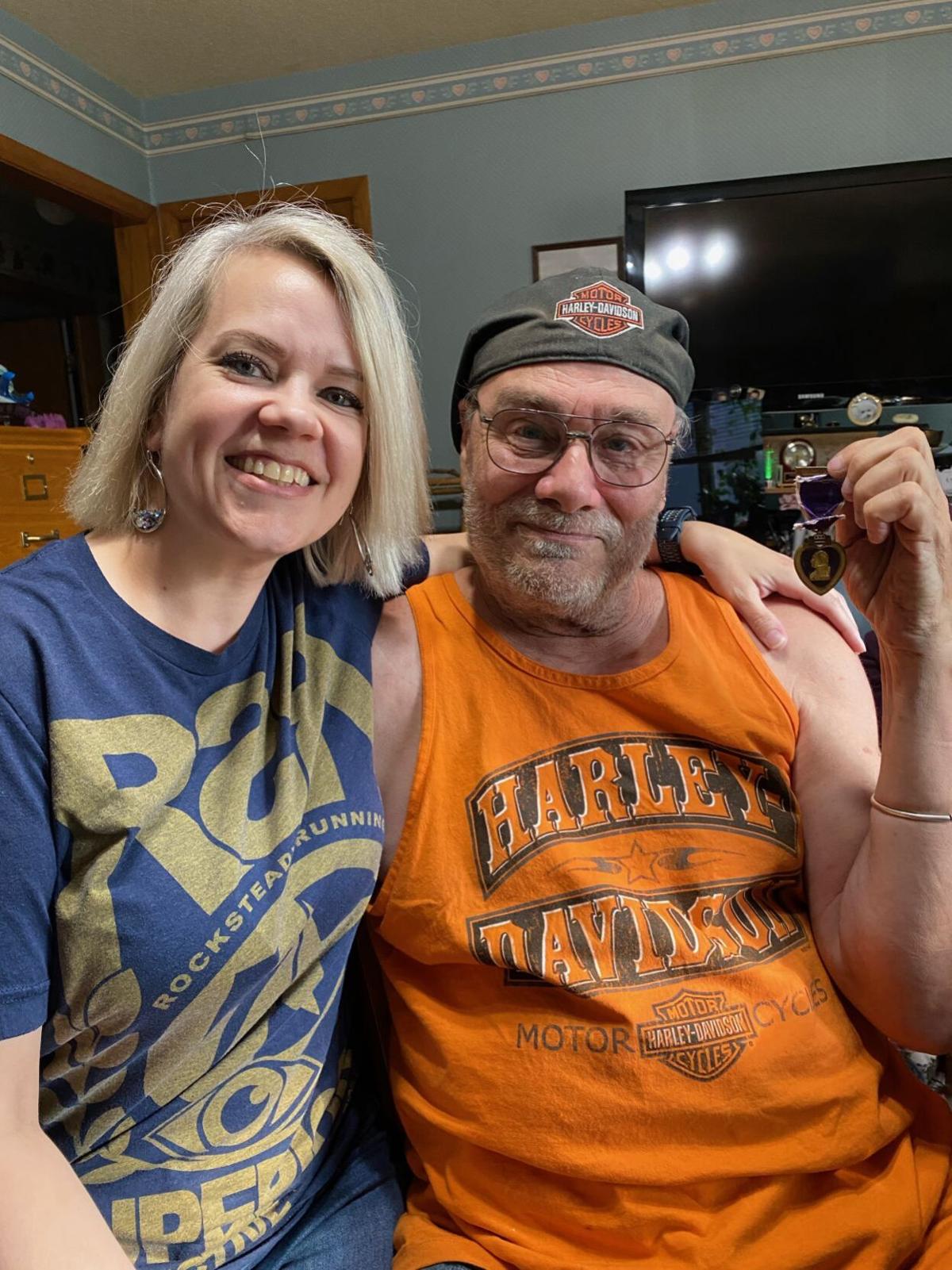 The fate of that medal, earned by blood and sacrifice, spanned the decades. It was stolen, then discovered in a garbage dump, before dedicated volunteers recently returned it to the loving hands of Van Bergen's grandson, Bob.

Vietnam veteran Bob Van Bergen, of Shakopee, had last seen the medal in 1972. Back then, he had been out of Vietnam for less than a year.

When Bob's father, WWII veteran Richard Vernon Van Bergen, died in July 1972, his wife presented Bob with the medals from his father's and grandfather's military service.

Bob combined them with his own medals, locking them in the glove box of his 1968 Mustang at his father’s funeral.

Within two hours, they were stolen.

And for almost a half century, they were all missing.

Then, July 6, Bob answered a phone call from his cousin Nancy Van Bergen. “Guess what? They found the Purple Heart.”

About 18 years ago, sanitation worker Wayne Ingebritson, of Janesville, was dumping trash at a Waseca County landfill when something purple caught his eye. As a fellow Vietnam War veteran, he knew its significance immediately.

Why that particular medal ended up in the landfill and how it got to Waseca at all remains a mystery.

For years, Ingebritson kept it safe and searched for its rightful owner. He visited Veterans Affairs offices and repeatedly declined offers from veterans groups to take the medal off his hands and find the owner for him.

It was important to Ingebritson that he personally made sure the owner was found. He did not want it to get lost or become a neglected project of a larger organization. He spent time at a library in Mankato poring over Purple Heart records.

Finally, Ingebritson saw an organization called Purple Hearts Reunited mentioned in the newspaper. He gave them a call. A little over a year later, he heard from them again.

Jen Moeller, Bob's second cousin and the great-granddaughter of Albert, received a call from Purple Hearts Reunited in late June asking whether she was a relative of the Van Bergen family. Moeller’s records were accessible due to her extensive research in her familial ancestry, allowing the organization to contact her.

“I would have traveled anywhere to have picked it up,” Moeller said. “The Purple Heart has so many stories that are attached to it.”

Moeller’s aunt, Nancy, informed Bob of the Purple Heart’s recovery. Bob couldn’t believe it. He had long since given up any hope of getting the medal back.

The same day she received it from Ingebritson, Moeller stood outside Bob’s house with the medal laid out in her hand. The Purple Heart is tattered but intact, with Alfred Van Bergen’s name inscribed on the back side.

Moeller believes she and Ingebritson were meant to be part of the story.

“I feel like I was meant to be its caretaker for however long it took me to figure out whose it was,” she said.

“He’s such a lovely person. He hugged me first, and then he looked at it. I think it was kind of surreal for him, that it was back in his possession and back in our family’s possession,” Moeller said. “He was very grateful.”

“It blows me away because this medal could have been lost forever had he not been at the landfill that day,” Bob said.

“[I was] elated. Emotional. Surprisingly emotional for something I thought I had forgot about after all those years,” Bob said. “[The medal has] had a rough journey.”

Purple Hearts Reunited is dedicated to returning lost medals to their owners or said owners’ kin.

“It happens more than most people know,” Bob said. “Especially with today’s younger generation, things that are generational don’t seem to mean as much.”

Years ago, Bob purchased duplicates of his own lost medals at a Minneapolis military antique store for $150. They now sit in a shadowbox designated for his eldest son when the time comes.

The rest of his family's medals remain missing, but the Purple Heart has been returned to its rightful place and serves as a tangible symbol of hope and restoration.

With 20 veterans in the family, the Van Bergens occupy a substantial section of Fort Snelling National Cemetery.

After Albert Van Bergen lost his leg in the Argonne Forest and left the military, he worked for Minneapolis Artificial Limb, where his very first customer was a girl who had lost her leg in a train accident. The two fell in love and were married.

Albert's son Richard enlisted at age 14, having his parents sign for him using his older sister’s birthdate in order to allow him to serve. He served in WWII until the Army found out he was only 16 and honorably discharged him.

After his own time in the Army, Bob earned his second Army Commendation medal and was given the option of trading one year in the National Guard for his eight remaining months of active service. Bob having had enough after serving in Vietnam, took the offer.

Bob's mother found herself raising 10 children by age 34. Of the 10, five enlisted in the military.

In addition to his service, Bob Van Bergen's accomplishments span from being a permit-to-carry instructor to spending time as a photographer to being a published author.

A mobile version of the Vietnam Veterans Memorial came to Shakopee in 1993. Van Bergen waited nine of the 10 days it was in town to go see it, aware of the emotions it would stir.

Approaching the wall, he fell to his knees and sobbed. A poem titled "Reflections – The Travelin’ Wall" was born.

Bob has written a vast amount of other poetry. His mother had always wanted him to publish something, but died by the time Bob published his work.

Now, not only is Van Bergen a published author, but he has been featured in several published news articles along with various family members.

“I’ve had an interesting life,” said Van Bergen, who turned 71 on Aug. 25 and has three children and eight grandchildren.