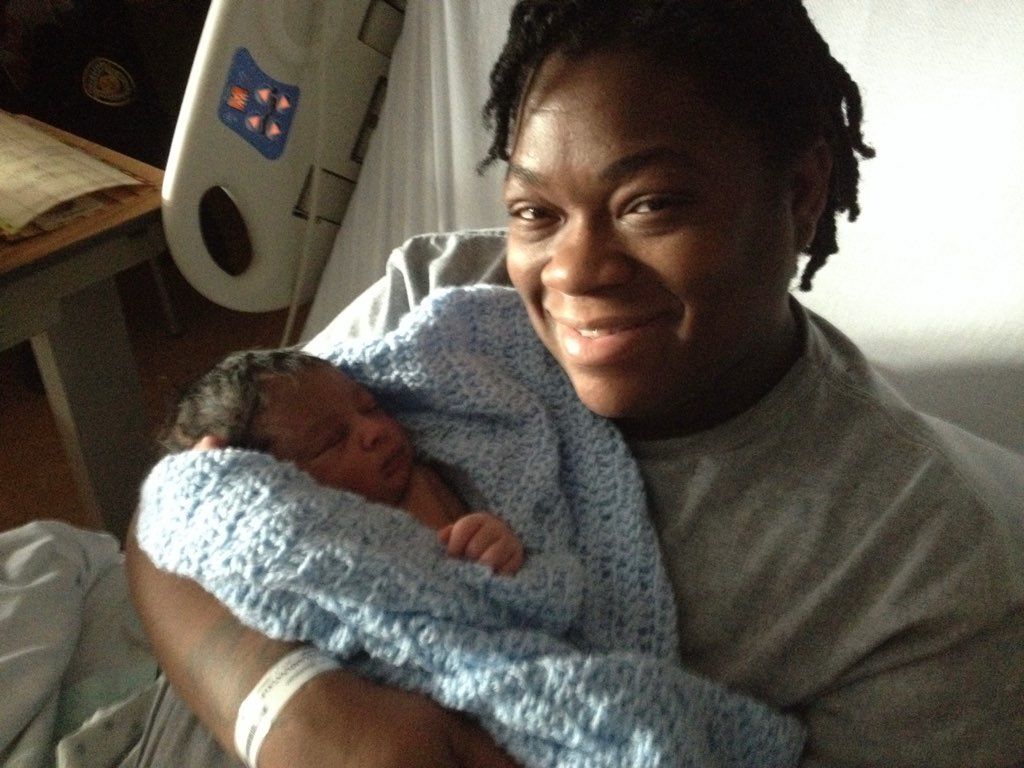 Natalie Pollard with her baby, Chancellor, after she gave birth while incarcerated on Feb. 21, 2016 at St. Francis Medical Center in Shakopee. 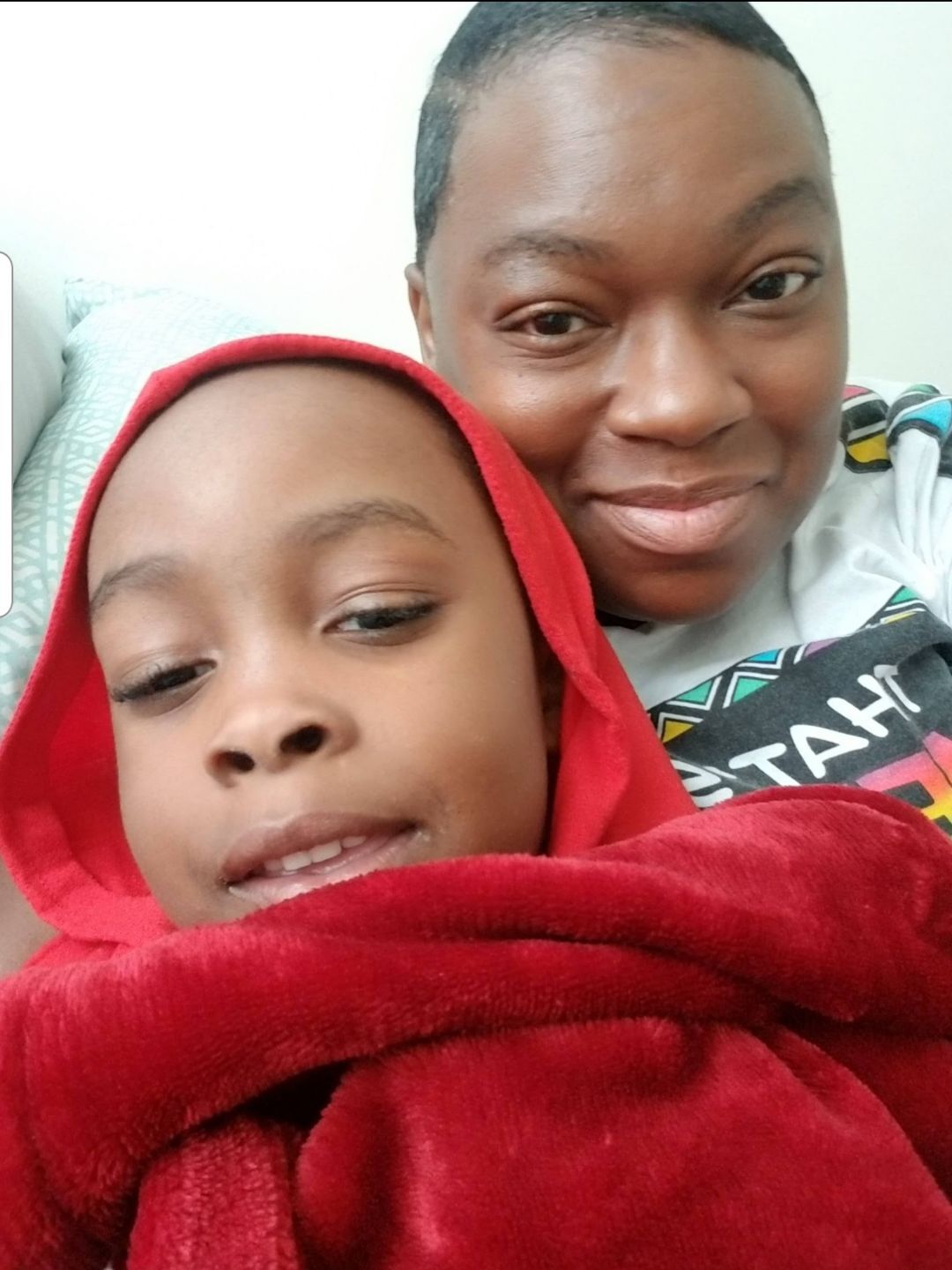 Natalie Pollard with her son Chancellor.

Natalie Pollard with her baby, Chancellor, after she gave birth while incarcerated on Feb. 21, 2016 at St. Francis Medical Center in Shakopee.

Natalie Pollard with her son Chancellor.

Natalie Pollard wore gray prison garb and kept a blanket over her lap to conceal her handcuffs when she was wheeled into St. Francis Regional Medical Center in Shakopee to give birth to her youngest child on Feb. 21, 2016.

Just 36 hours after her 10-pound baby was born, Pollard, of Minneapolis, had to kiss him goodbye and was ushered through the hospital and out the doors by two correctional officers.

The next few months were rough. Pollard battled postpartum depression and dealt with the trauma of having to separate from her newborn son as well as her five other children, all of whom were living with Pollard’s parents in Crystal.

The year before, in July 2015, Pollard’s boyfriend broke through the window of her townhome and tried to fight her, according to Ramsey County court documents. She was pregnant with her youngest son at the time, and her five other children were asleep upstairs. Pollard ended up stabbing her boyfriend in an attempt to protect herself and her children, she told investigators.

In 2016, Pollard was convicted of second-degree unintentional murder and sentenced to a decade at the Shakopee Correctional Facility. But in the fall of 2017, the Minnesota Court of Appeals reversed Pollard’s murder conviction on the grounds that the Ramsey County District Court erred in the instructions it gave jurors in her case.

Pollard was given the chance to plead guilty to second-degree manslaughter instead of going through with another trial. It’s a significantly less serious offense than murder.

The plea deal meant she’d have to admit her actions were criminal, with a manslaughter conviction stained on her criminal record. But it also meant she’d be free; she’d get to see her six children outside of the visitation room at the Shakopee prison.

So Pollard took the deal, which her attorney called a “bitter pill, but a necessary one.”

Now, Pollard is free and lives in a one-bedroom apartment in North Minneapolis. She’s able to visit her children on the weekends — though they still live with her parents in Crystal.

And Pollard’s experience being pregnant and giving birth in prison compelled her to become an advocate for other women going through similar situations.

Each year, dozens of pregnant mothers at the Shakopee Correctional Facility must say goodbye to their babies after giving birth and return to prison.

But the Minnesota Department of Corrections is trying to change that with a bill called the Healthy Start Act, which would allow qualifying mothers the ability to transfer to an alternative setting to care for and bond with their infants while incarcerated.

‘Horrible for the women’

Before an incarcerated woman gives birth, the Shakopee Correctional Facility connects incarcerated pregnant women to a doula with the Minnesota Prison Doula Project. The doula provides the mother with physical, emotional and informational support during pregnancy, labor and delivery and will meet with the mother at least twice before the delivery, and will meet with her at the hospital for the delivery.

For incarcerated women, doulas provide a rare sense of comfort throughout the birthing process. Pollard said as soon as she was admitted to the hospital, she was calling for her doula. Doulas are the only familiar faces incarcerated mothers can have while in the delivery room. They do everything a loved one would normally do: feed the mother ice chips and comfort her throughout the birthing process.

When an inmate gives birth, she isn’t allowed any visitors at the hospital, and a prison guard is present in the delivery room at all times.

Pollard said her experience giving birth while incarcerated was “humiliating.”

Pollard remembers hearing the two correctional officers standing against the wall in her delivery room talking about what they were going to cook that weekend as she was giving birth.

“It was something I’ll never forget,” Pollard said.

Usually the day after an incarcerated woman gives birth, her doula will return to take photos of the mother and baby, and will help comfort the mother during her separation visit.

Lori Timlin, the parenting coordinator at the Shakopee prison told the newspaper in 2019 she doesn’t think anyone can appreciate what it’s like for a mother to say goodbye to her day-old infant after giving birth.

“It’s horrible for the women,” Timlin said. “I really can’t emphasize how difficult it is for them.”

But the separation is also hard on the infants.

“I always think about the babies not understanding that they won’t be seeing their mom again for that next feeding,” Director of the Minnesota Prison Doula Project Raelene Baker said. “They know the next time they eat they don’t know they won’t be with Mom.”

Baker said as the visitation policy stands, critical bonding between mothers and their babies up to the first year mark is “significantly impacted,” and prison policies don’t work around the small population of women who have infants.

“Everything is harder in prison,” Baker said. “So this community alternative setting would allow a woman to be placed in a halfway house where she can receive continued treatment and continued care, and still have closeness with her child. In some situations, having the child with her, or having the child near the mom, so the mom can nurse the child.

From 2013 to 2020, 77% of the pregnant women who were incarcerated in Minnesota had not committed a new crime, according to the department of corrections, and 84% of these women did not have any governing violent offenses.

The majority of the pregnant women who are incarcerated are in prison for a technical violation, such as not checking in with their supervision agent after release, according to Minnesota DOC External Relations Director Safia Khan. Some simply made mistakes with the conditions of their probations.

Khan said right now, there are 20 women at the Shakopee Correctional Facility who will give birth while incarcerated this year. About 40% of those women will reach their release dates within 60 days of giving birth, Khan said.

“Looking at the data, a lot of these moms are soon going to be reunited with their children anyways,” Khan said. “Is a separation period going to negatively impact those children in a way that is not helpful for the communities?”

The Healthy Start Act will allow eligible incarcerated women to be placed in community-based programming settings in the later term of their pregnancy and for a period of their post-partum. Many of those women are located at the Shakopee correctional facility, which is the only women’s prison in the state. During placement, the mothers receive appropriate treatment and supportive services, including prenatal care and parenting classes, according to the DOC.

Khan added the alternative settings do not mean freedom; and new moms would only qualify if their case was approved by the commissioner. The option is also only available until the child turns 1.

But most of the time, it means the incarcerated mother would be able to spend significantly more time with her infant during a season when bonding between mother and child is crucial.

Since Shakopee is the only women’s prison in the state, many women at the Shakopee Correctional Facility have children who live too far away for regular visits.

The Healthy Start Act would also allow incarcerated moms to get to know their doulas on a more personal level, both before and after they give birth.

Baker said the pandemic has made the birthing process and visitation especially hard.

“A doula relationship is personal. To get to know a doula and trust them over the phone is challenging.”

In addition to the Healthy Start Act bill, the DOC last year introduced a lactation program for incarcerated mothers who choose to send breastmilk to their children, Baker said.

“That’s going to be a game-changer, where the mothers will be able to express themselves,” Baker said.

While the DOC previously offered breast pumps for mothers who wanted to keep their breast milk going until they were released, that option isn’t realistic for women like Pollard, who were going to be in prison longer than a few months.

Pollard said one of the hardest parts about her experience giving birth while incarcerated was choosing not to breastfeed, because she knew she’d only get to feed her son a few times before she’d have to leave him.

“The nurse was trying to latch my son,” Pollard said. “Why would I do that if I’m going back to prison that same day?”

Baker said the Healthy Start Act is a “good start,” but eventually, she’d like to see a bill that gives incarcerated mothers the option to give birth in a setting that’s more comfortable for them.

“If you look at the goal of our parent organization, it’s to end prison birth in America,” Baker said.

The Healthy Start Act has passed the House and the Senate public safety committees with unanimous support, and is awaiting floor action in both chambers.

Pollard said when she heard of the bill, she was “floored.” She said she believes when she gave birth in prison, the system failed Pollard and her then-infant son.

“Moving forward with the Healthy Start Act and being able to give women the opportunity I didn’t have, I couldn’t be more excited,” Pollard said.

Pollard’s doula training is scheduled to be wrapped up by June. She’s due for her seventh baby in October, and she said she’ll definitely put her training to use.

“You’d do anything for your children,” Pollard said. “Which I did.”

Each year, dozens of pregnant mothers at the Shakopee Correctional Facility must say goodbye to their babies after giving birth and then retur…