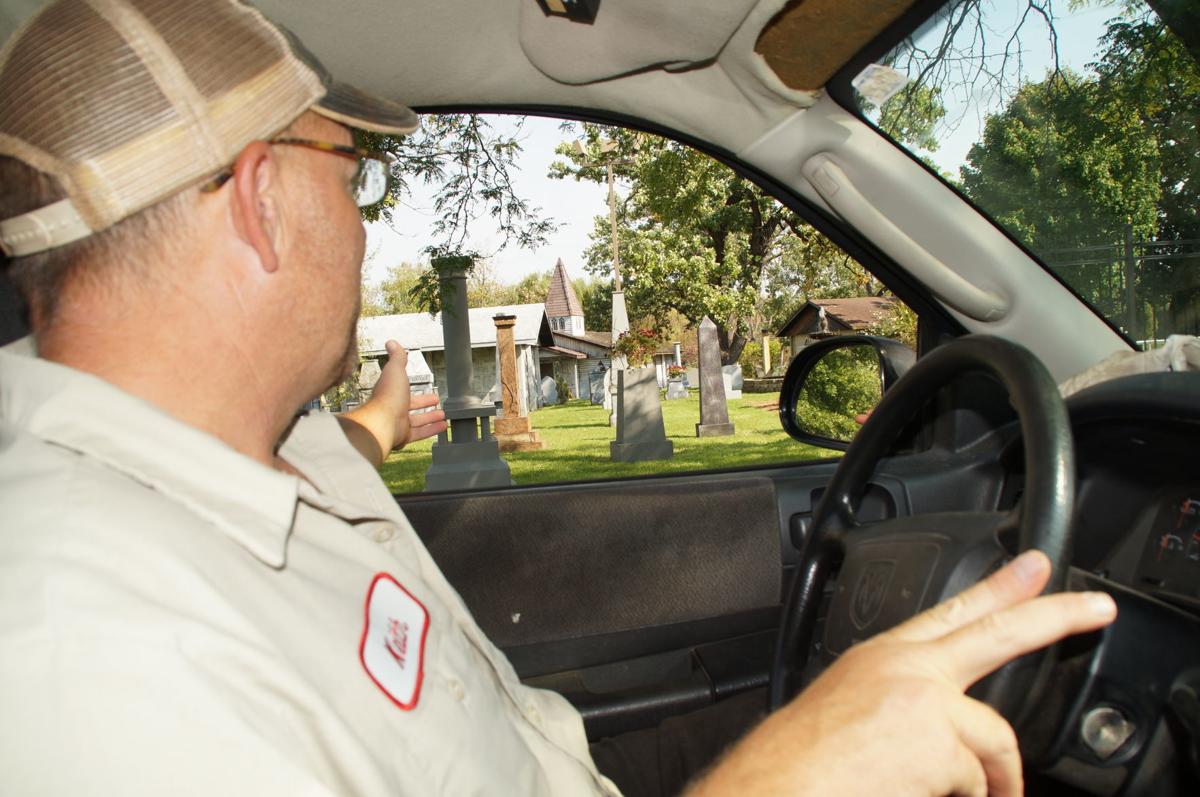 Keith Kratz, ValleyScare’s maze designer, points out what he called his “baby.” The Undertakers maze is one of the projects he’s most proud of creating. 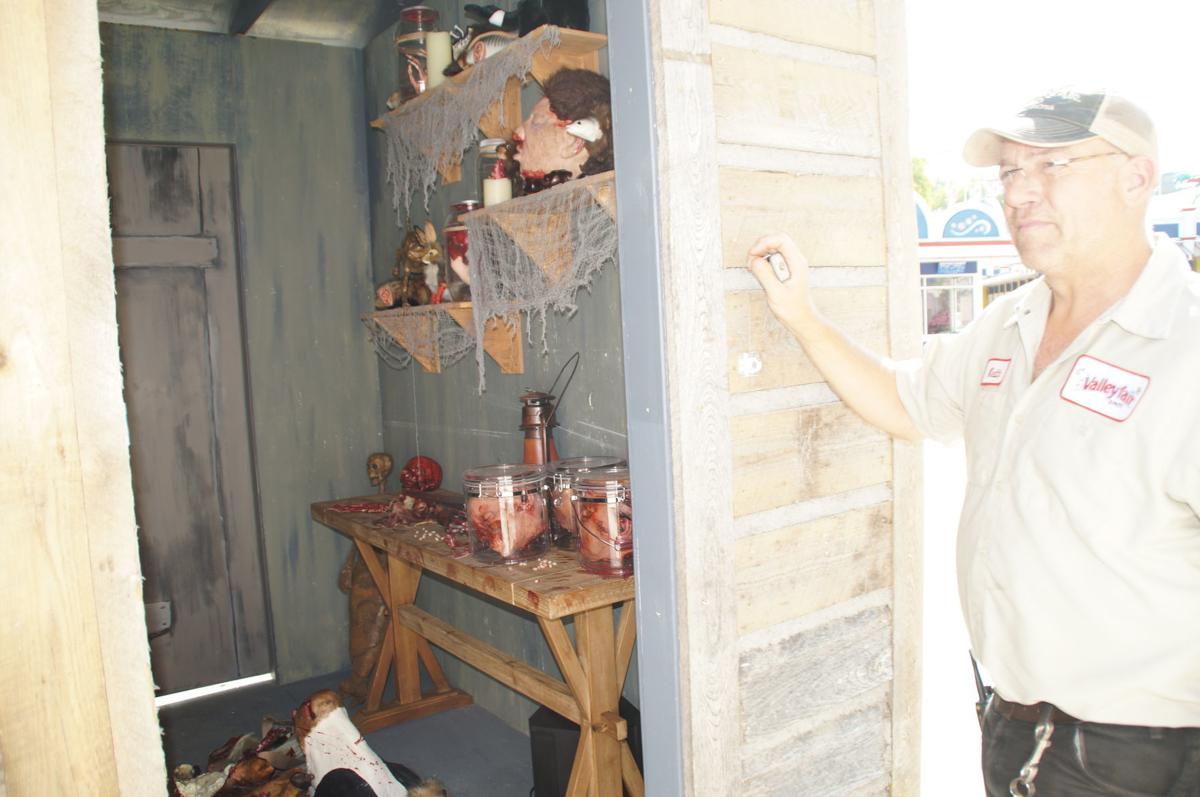 Kratz opened the door of one of his newest projects, called Blood on the Boundary Waters. This maze consists of several small cabins, each with different themes. This particular cabin’s theme is “taxidermy.” 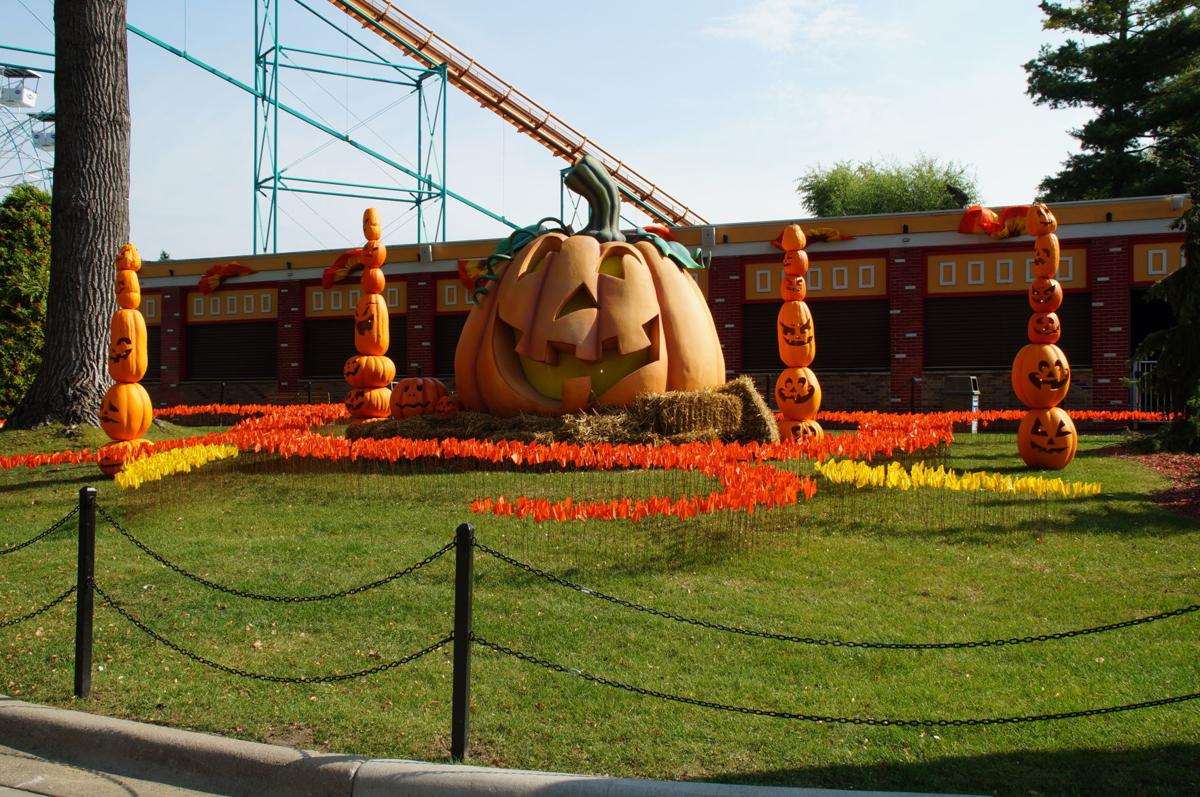 Keith Kratz, the ValleyScare maze designer, helped find or design most of the Halloween decorations posted throughout the park, including this giant pumpkin. 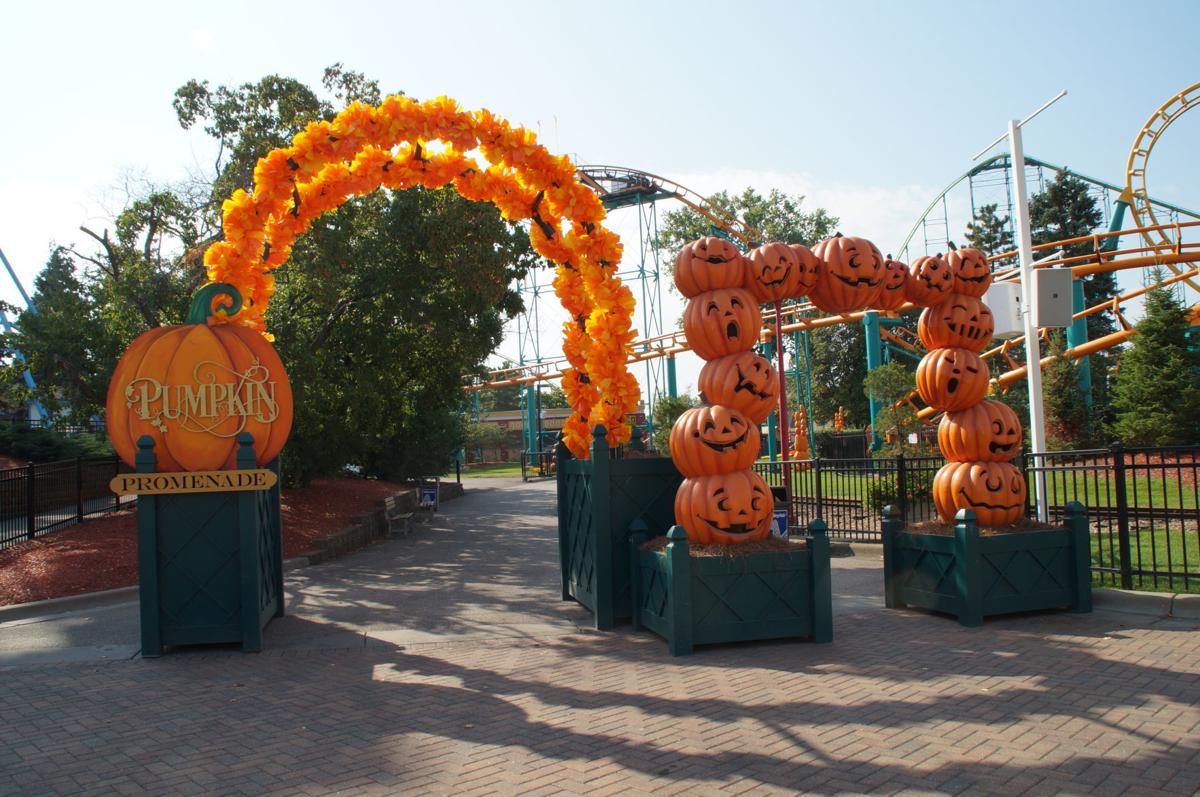 Keith Kratz, the ValleyScare maze designer, helped find or design most of the Halloween decorations posted throughout the park, including this photo op. 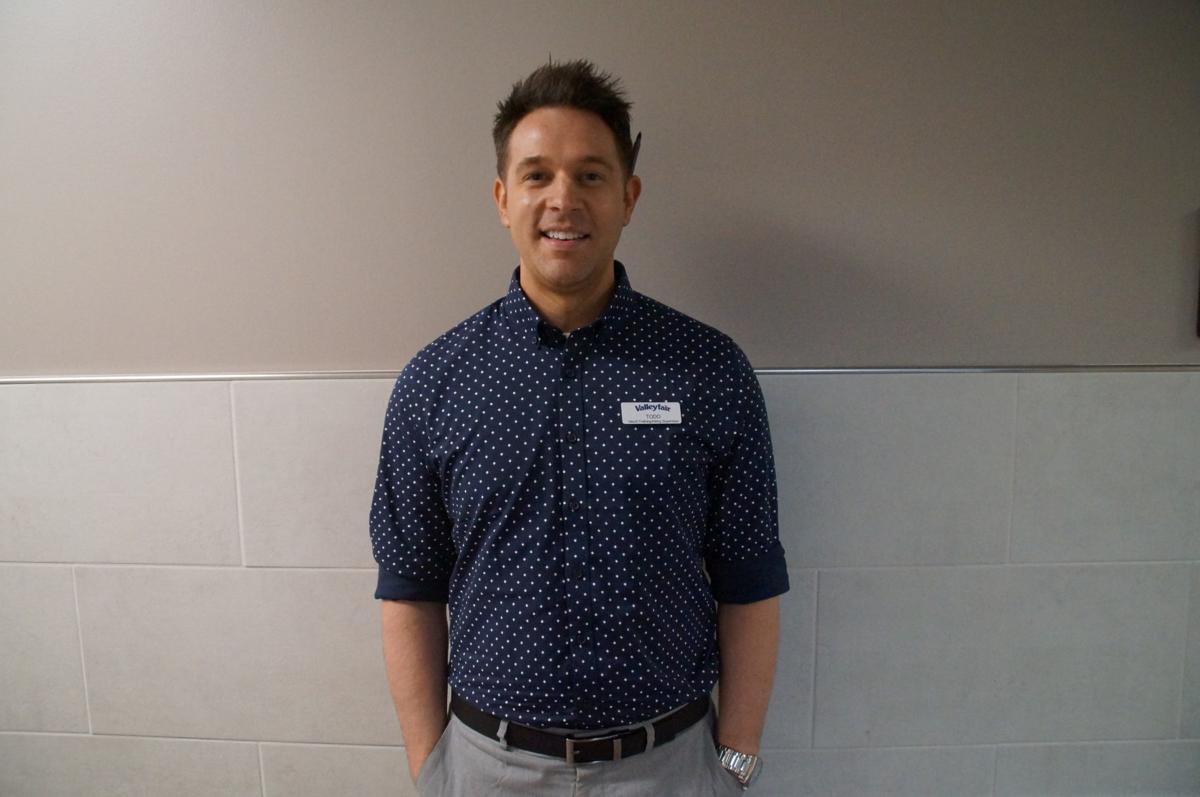 Todd Reutters hires the monsters for ValleyScare. He’s also the Butler at the Chateau maze.

Keith Kratz, ValleyScare’s maze designer, points out what he called his “baby.” The Undertakers maze is one of the projects he’s most proud of creating.

Kratz opened the door of one of his newest projects, called Blood on the Boundary Waters. This maze consists of several small cabins, each with different themes. This particular cabin’s theme is “taxidermy.”

Keith Kratz, the ValleyScare maze designer, helped find or design most of the Halloween decorations posted throughout the park, including this giant pumpkin.

Keith Kratz, the ValleyScare maze designer, helped find or design most of the Halloween decorations posted throughout the park, including this photo op.

Todd Reutters hires the monsters for ValleyScare. He’s also the Butler at the Chateau maze.

Valleyfair was dead on a recent Tuesday morning, and not just because the amusement park was closed to the general public. There were fake dead things lying around in storage rooms and mazes and throughout the park itself. Skeletons. Fog machines. Motion-censored zombies. A cemetery. Cobwebs.

And Keith Kratz, the mastermind behind the custom-made designs scattered across the park, drove a run-down pickup truck throughout the grounds as slow, classical music whispered from the speakers. He stopped to tell one maintenance worker to please not put fog machines in the grass — they’ll kill it — and to tell another worker where she should put the corn stalks that were left over from the corn maze. Best to line the lampposts with the corn stalks, don’t you think? Kratz threw the truck in park when he eyed something he needed to inspect: The haunted cabins he designed for the park’s newest maze, Blood on the Boundary Waters. He stood across from one of the outhouse-sized cabins with a hand on his hip.

“I’ll have to put something in between there to fill the space,” he said to a maintenance worker, motioning to empty space beside a cabin. “Probably a plant.”

As for the plants, he ordered them about 10 months ago. He arranges all the flowers scattered across the park, too.

Kratz works between 80 and 90 hours a week this time of year to morph the upbeat, happy-go-lucky amusement park into a cobweb-filled, foggy, fake-bloody scare zone. When he was nine, he told his mom he wanted to own a park. And in a way, he said, he does.

“This is kind of like my dream job,” Kratz said. He started working for Valleyfair more than 20 years ago as a maintenance worker before ValleyScare even existed.

Kratz, ValleyScare’s maze designer and facilities maintenance manager, Todd Reuttner, who is in charge of hiring 300 monsters each season and is an actor himself, along with other Valleyfair staff members and associates, are busy in September before ValleyScare opens. They made one thing clear: scaring people is more than walking around the park with pale faces and fake blood. There’s a science to the way the park is decorated and to the scare tactics of the monsters.

‘It doesn’t have to look crappy to be scary’

Kratz said most of the spooky details guests will see at ValleyScare were custom-made by maintenance workers, contractors, or himself. Anything that looks dark or dangerous in the fall months probably has Kratz’ fingerprints on it: including the guest shop window decorations, where the mannequins are dressed up like monsters, the giant jack-o-lantern made of foam and plastic near the kids’ area, and the thousands of dollars worth of props that make the haunted mazes — well, haunted.

Kratz attends a conference each year called the TransWorld Halloween Show, where experts like himself can purchase or learn creative tips and scare tactics. The biggest thing Kratz has learned since he’s started decorating the park for Halloween? Focus on a few big centerpieces, and don’t stress about the other details.

“People concentrate on so many little things that it all becomes junk,” Kratz said.

One of his favorite projects, which he designed two years ago, is called the Undertakers. Kratz designed this maze to look like a natural cemetery with a well-groomed yard, tall trees and a fountain.

“It doesn’t have to look crappy to be scary,” Kratz said, adding that sometimes, attractions that look the most natural are the ones that spook people the most.

Details most people glaze over are hard-earned pieces Kratz and artists worked hard to purchase or make. One of the mazes features an $8,000 chandelier made by a local artist.

“There are things throughout these mazes that are so extraordinary,” Kratz said.

He recently re-purposed a broken clock that used to stand on top of a clock tower in the park. When he realized the park needed to replace the clock, he decided to put it above the fireplace inside one of ValleyScare’s haunted mazes.

Kratz doesn’t just care for the park in the fall. In the winter, he fulfills orders for details the park might need like flower pots and decorations, he draws up designs for his next spooky ideas and makes a grooming and decorating game plan for the in-season months. In the summer, he’s in charge of the park’s facility maintenance, making sure it looks crisp and inviting. In the fall, he’s in full-blown Halloween decorating mode, where he uses up most of his creative juices. And on top of decorating for ValleyScare, Kratz grooms his house for trick-or-treaters.

“Let’s just say people like coming to our house for Halloween,” he said. “We’re the talk of the neighborhood.”

The science of scare

Todd Reutter, has been working at ValleyScare since it started and is the famous butler character at the park’s Chateau maze, is in charge of hiring around 300 monsters every season. He holds “creature castings” at the end of each summer to bring in new talent, where candidates are asked to read the “itsy bitsy spider” in a scary voice of their choice, and they are also asked to take on different characters, like a hungry werewolf or a creepy clown. The goal, Reutter said, is to assign the actors to a character that best fits their personalities.

The actors are each assigned a character name accompanied by back story. Reutter’s character is a Butler, and he stands outside the Chateau maze to greet guests before they enter.

“Vampires don’t hurt me because they need me to lure in the guests,” Reutter said of his character.

Actors are also trained on body language and given icebreaker activities. Vampires, for example, are more aristocratic, so they will walk eloquently, with their noses toward the sky. Other characters from mazes like the Bloodshed might be dressed in dirty clothes and walk with hunched backs.

”We want the actors to think and behave like the characters,” Reutter said. “It takes the pressure off how to scare.”

The Friday before ValleyScare opens, Reutter coordinates a dress rehearsal, where actors put on their makeup and costumes and “work out all the kinks” before the guests arrive the next day. He also trains actors on how to recognize the guests’ limitations. When a guest appears especially jumpy or scared, he said, the monsters are trained to be respectful in order to keep everyone safe. If someone does need to leave the maze, monsters are trained to recognize this and usher them out of the area using emergency exits.

And unlike most of the guests who will flood to ValleyScare for the sole purpose of getting spooked, Reutters said the actors don’t get scared.

“Within a few hours, you get desensitized,” he said. Plus, it helps to know what the place looks like with the lights on.

When the ValleyScare season is over, the actors dress up in tuxedos and ball gowns for an event called “Scaries,” which is like the “Oscars,” to reward the scariest and creepiest monsters of the season.

As for Kratz, he pops by when ValleyScare is operating to make sure guests are sufficiently scared. But by the time the event is running, most of his hard work is done. And even though he designed all the mazes himself, he still jumps sometimes when a monster pops out at him.

“I mean, how could you not?” Kratz said, laughing.