Brady Daniel Zipoy at a remote hearing on Dec. 3. 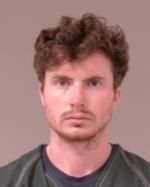 Brady Daniel Zipoy, the 24-year-old Minneapolis man who was charged with second-degree murder after allegedly shooting and killing 65-year-old Timothy Guion in Guion's home on June 8, 2020, will undergo a trial by stipulated facts after two forensic psychologists deemed him unable to comprehend the wrongfulness of his crime while it happened.

That means the case could move to the civil realm, according to Scott County Attorney Ron Hocevar.

Hocevar said at the next hearing set for March 12, the defense and prosecutors will present Scott County Judge Paula Vraa with a set of uncontested facts both parties agree to, and Vraa will then decide whether Zipoy is guilty of the crime the state has charged him with.

“I believe both parties expect to find him guilty,” Hocevar said.

After that, the discussion shifts to whether Zipoy knew his conduct was wrong, Hocevar said. If Vraa rules Zipoy was in a mental state that prohibited him from knowing his actions were wrong at the time of the crime, the case will move to the civil realm.

“If it moves to the civil area he would not be sentenced criminally,” Hocevar said. “He could go to a mental institution, but he would not go to prison.”

According to assistant Scott County Attorney Wes Abrahamson at a review hearing Feb. 17, two forensic psychologists who examined Zipoy after the alleged crime deemed Zipoy unable to understand whether he knew his conduct was wrong during the time of the incident.

According to a criminal complaint, on the day of the shooting Zipoy was with a witness who lived next door to Guion on Paha Circle, which is on the Shakopee Mdewakanton Sioux Community reservation. The witness told authorities Zipoy abruptly left the witness’ residence before driving his vehicle into Guion’s driveway and entering Guion’s home.

The witness who was with Zipoy before the shooting told investigators Zipoy was suffering from post traumatic stress disorder. The witness said Zipoy served in the military and had returned to Minnesota two years ago. He said Zipoy was “a big gun guy” and always carried a firearm, and said Zipoy had been making strange posts on social media prior to the shooting. The witness said while they were hanging out, Zipoy continued making “bizarre statements” that he did not understand, and he told Zipoy his comments scared him.

After the shooting Zipoy was immediately transported to the Shakopee Police Department, according to the complaint. During an interview with investigators, Zipoy admitted to entering Guion’s residence and shooting him, according to court documents.

Zipoy's attorney Brockton Dane Hunter declined to provide a comment for this story.