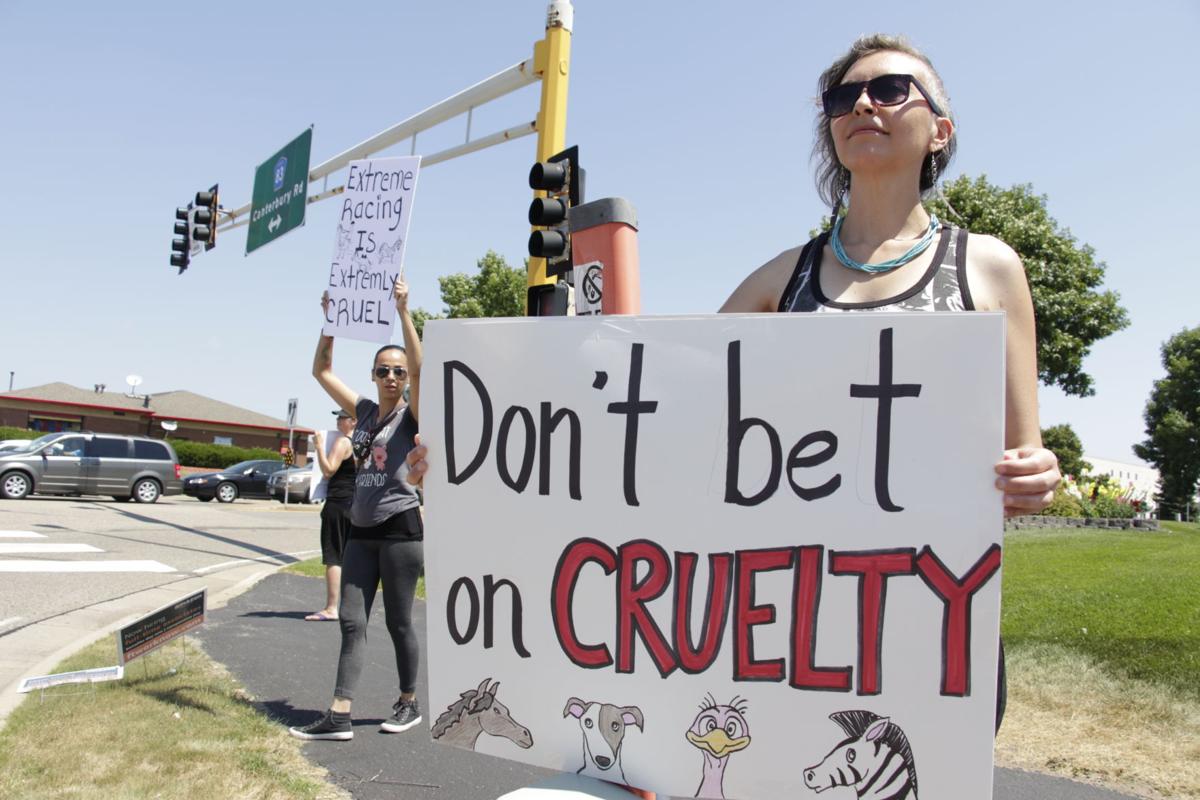 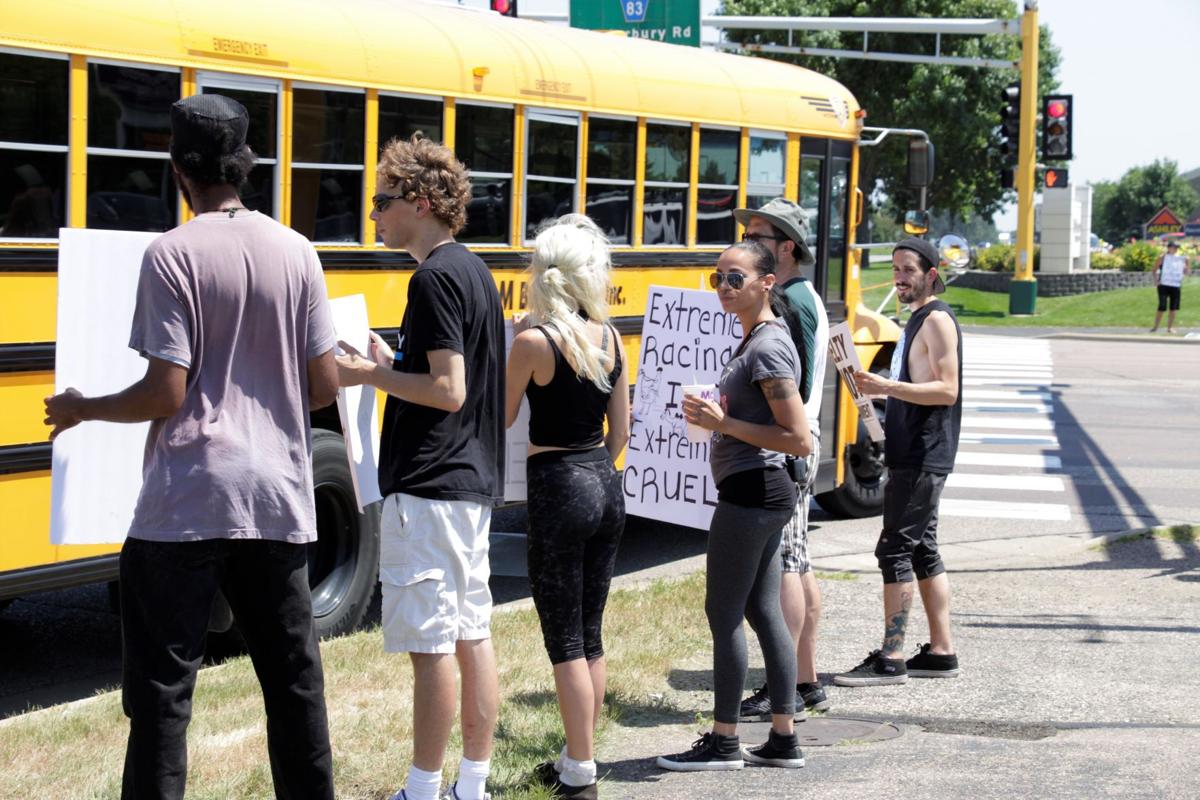 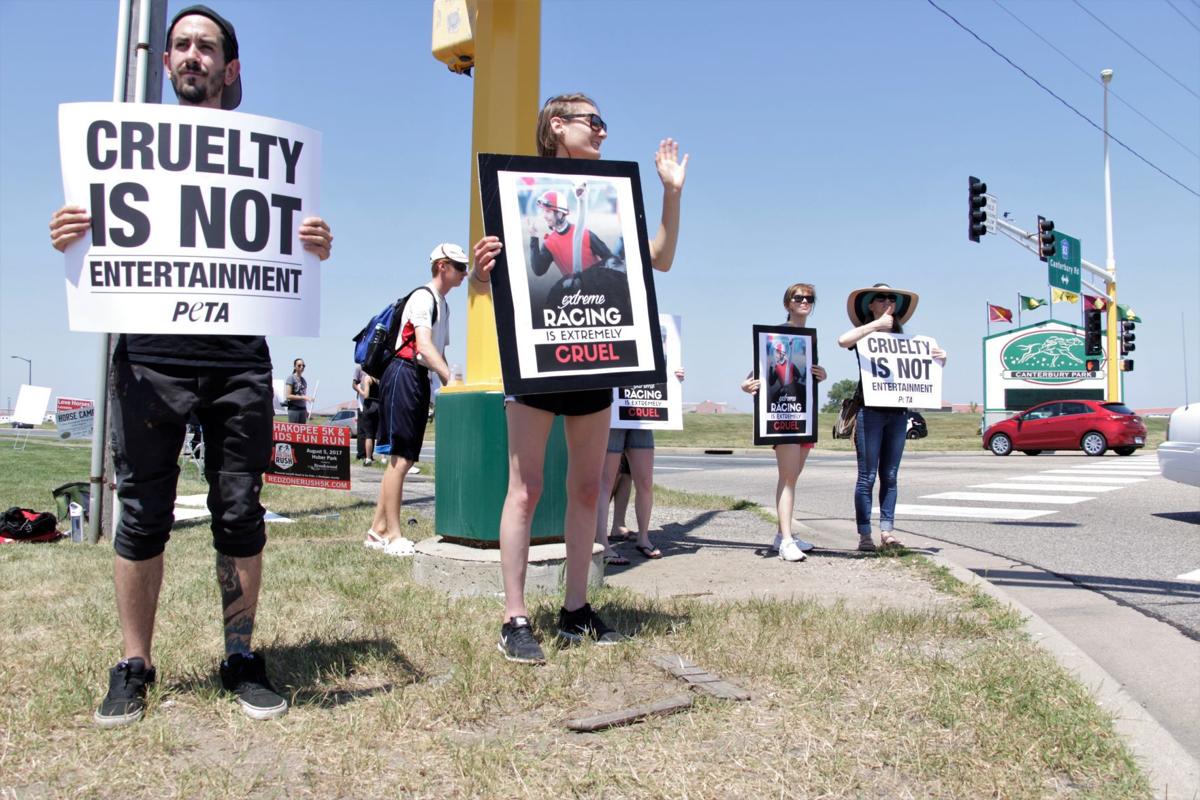 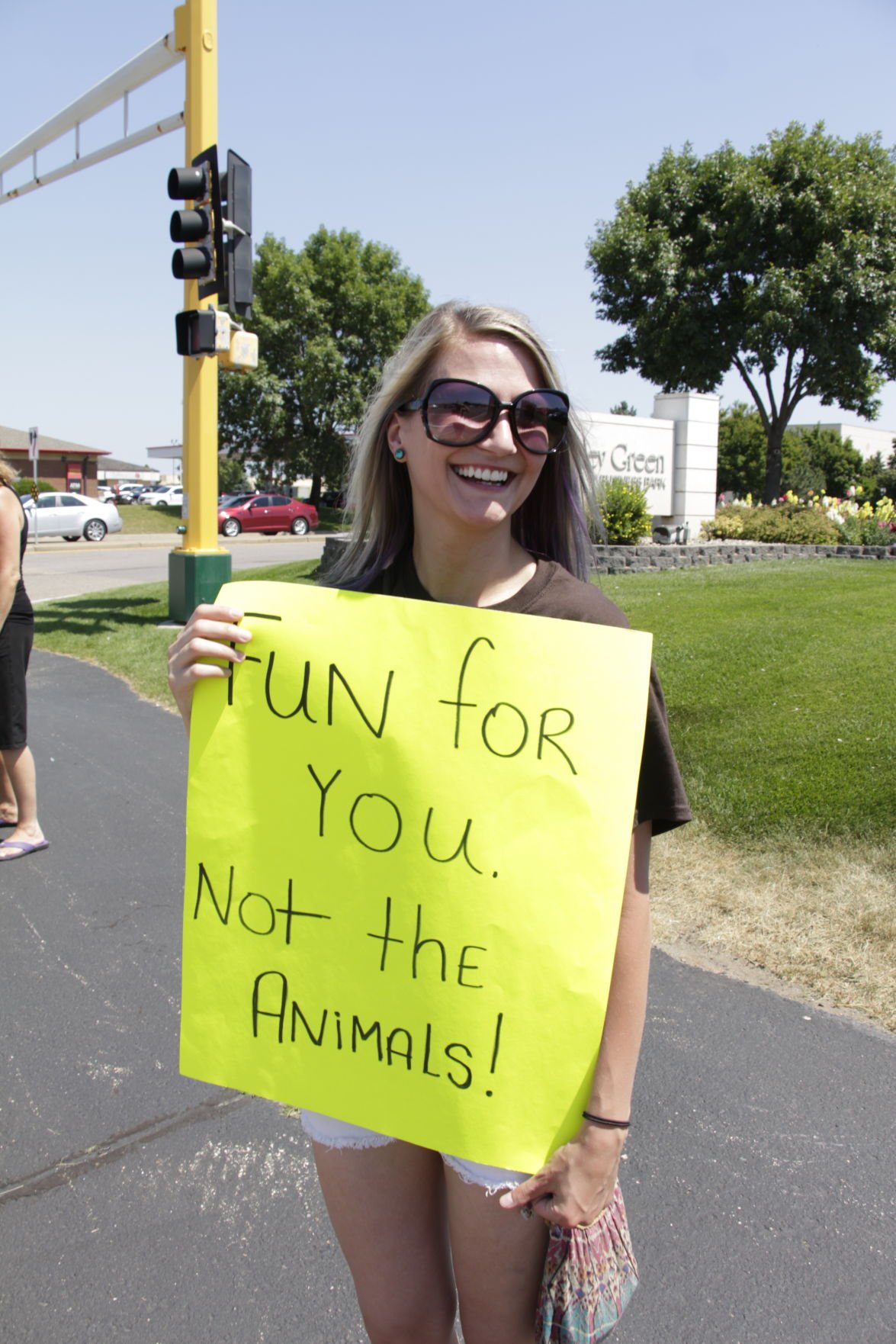 Ashley Riddle protesting Extreme Race Day outside of Canterbury Park. The group received waves, thumbs up, honks, and even people flipping them off and yelling profanity from noon to 2 p.m. 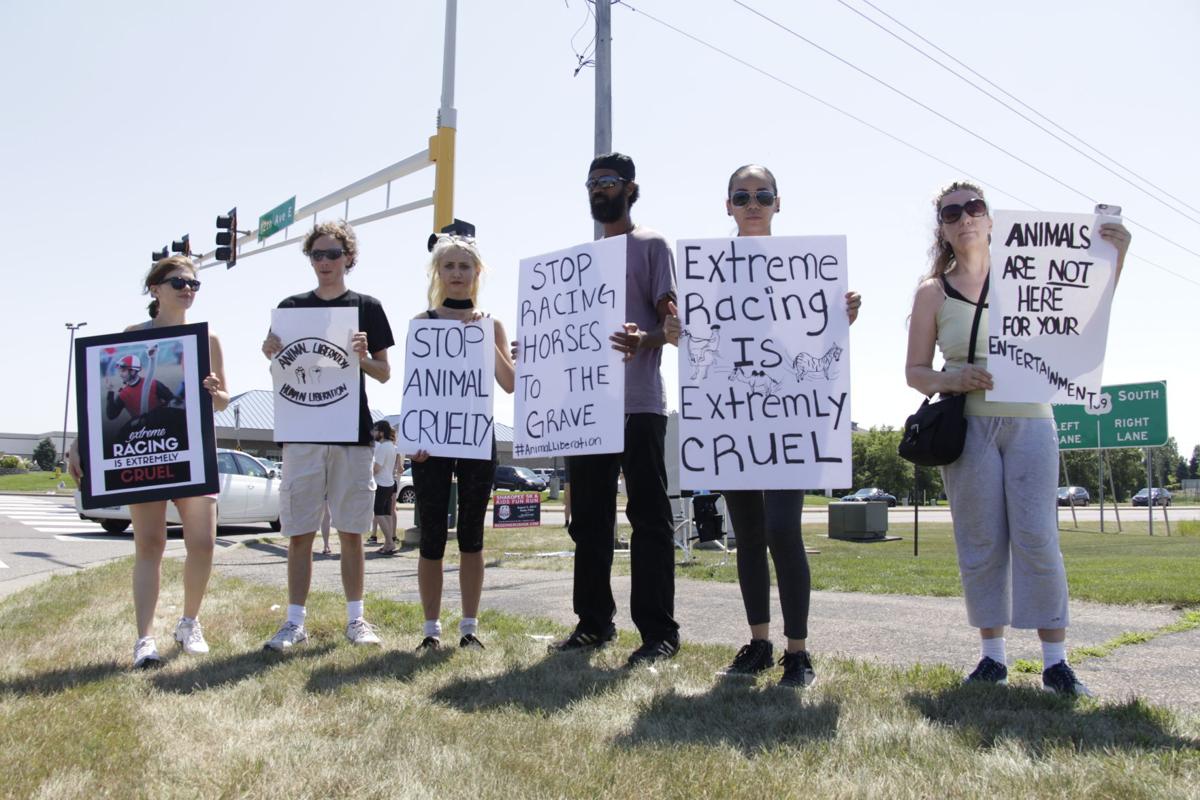 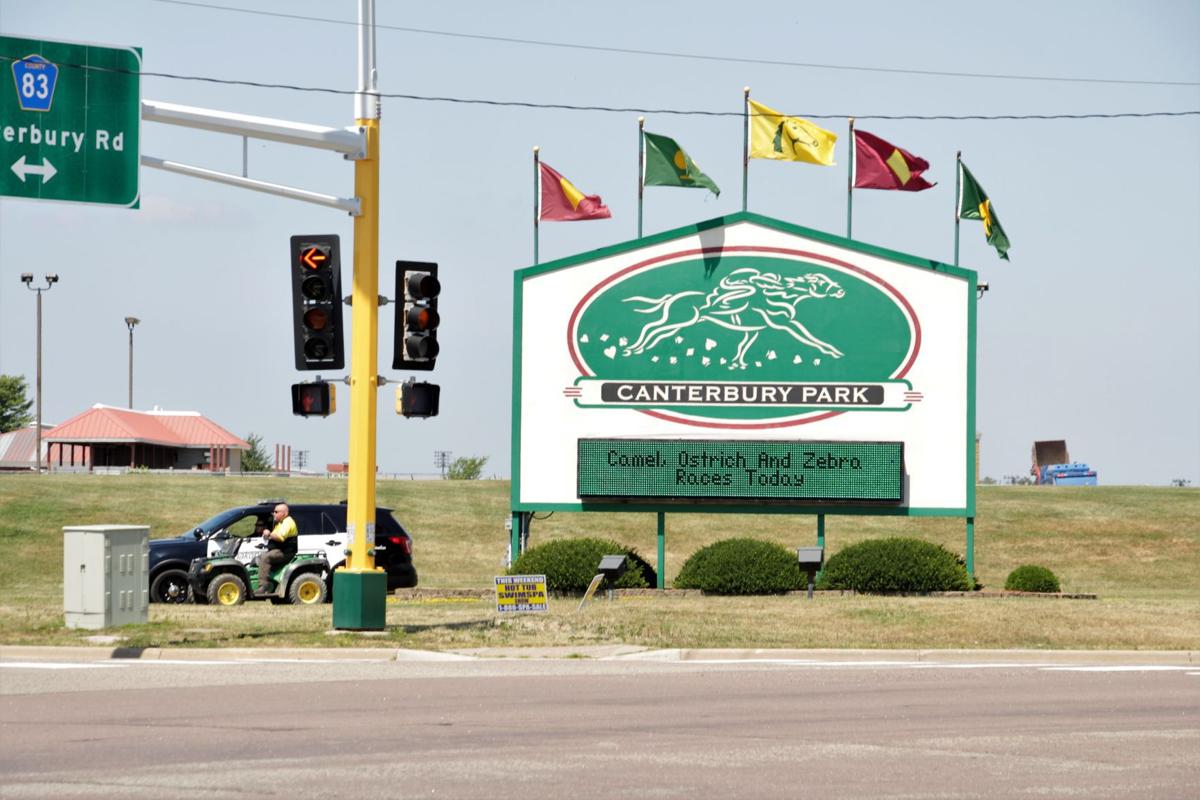 Shakopee police officers park outside Canterbury Park, across from a group protesting Extreme Race Day at the intersection of Canterbury Road and 12th Avenue.

Ashley Riddle protesting Extreme Race Day outside of Canterbury Park. The group received waves, thumbs up, honks, and even people flipping them off and yelling profanity from noon to 2 p.m.

Shakopee police officers park outside Canterbury Park, across from a group protesting Extreme Race Day at the intersection of Canterbury Road and 12th Avenue.

Three groups came together to protest the event: Animal Rights Coalition, Minnesota Animal Liberation and Direct Action Everywhere. The groups held signs on sidewalks at the intersection of Canterbury Road and 12th Ave., from noon to 2 p.m.

The groups are opposed to racing animals for human entertainment. In particular, they protested Extreme Race Day because they thought it was something different that other people could get behind protesting, according to Animal Rights Coalition Program Director Chelsea Youngquist.

This is the first time the groups have protested Extreme Race Days, but they wrote emails last year asking sponsors to stop supporting the event, according to Youngquist.

Hanna Dorn, a protester from Minneapolis, said she might have come to the event as a guest a year ago.

“It’s something that people don’t think about,” Dorn said. “It sounds fun and cute, but actually the animals are terrified when they get on the track. They’re coming from confinement for long distances, and zebras and ostriches are not accustomed to riders, so they’re frantically trying to get the jockeys off, which is a danger to the person, the animal and the crowd.”

The groups received mixed reactions from people in cars driving by, from people honking, waving and giving thumbs-up to people flipping them off and yelling profanities, according to protester Ashley Riddle.

“It’s 2017. There are so many other forms of entertainment that don’t harm living beings,” Riddle said.

Direct Action Everywhere organizer Sarah Jean noted the 90-degree weather was especially hard on animals having to carry weight on their backs.

“The bottom line with racing animals is that they’re thrown out like trash the second they get an injury or age,” Dorn said. “They’re neglected, abandoned, euthanized, or slaughtered. So if you want to gamble, go to a casino.”

Joe Hedrick, 73, disagrees. Hedrick owns the camels, ostriches and zebras that raced at Canterbury; some of the roughly 60 camels, 50 ostriches and 50 zebras, and rotates which animals race so they don’t get burned out.

“Not every camel is a race camel and not every ostrich is a race ostrich, or zebra — kinda like people,” Hedrick said. “But we respect them, even when they get older. Even I’m getting to that same (age) range, and I don’t want them to just do away with me.”

Hedrick originally bought his animals from zoos and keeps the animals that don’t race as backyard pets, or sells them. He grew up with animals — his dad was a rodeo clown and his first pet was a badger named Roly Poly.

“I have no problem with protesters at all, because I live in the United States of America,” Hedrick said. “And everybody can voice their opinion and not be imprisoned or beheaded because they don’t see it the same way as we do... but if they follow our record with our animals, they will see that we take very good care of them.”

There were no complaints about the protesters, who conducted themselves responsibly, according to Canterbury Park Spokesman Jeff Maday.

“We respect their right to voice their views although we have a fundamental difference of opinion,” Maday said. “Extreme Race Day is a very popular event and we make every effort to ensure that the animals and the people involved in the performance are safe.”

"The bottom line with racing animals is that they're thrown out like trash the second they get an injury or age...So if you want to gamble, go to a casino." —Hanna Dorn, protester

"I have no problem with protesters at all, because I live in the United States of America, and everybody can voice their opinion..." —Joe Hedrick, 73, owner of exotic animals in Extreme Race Day