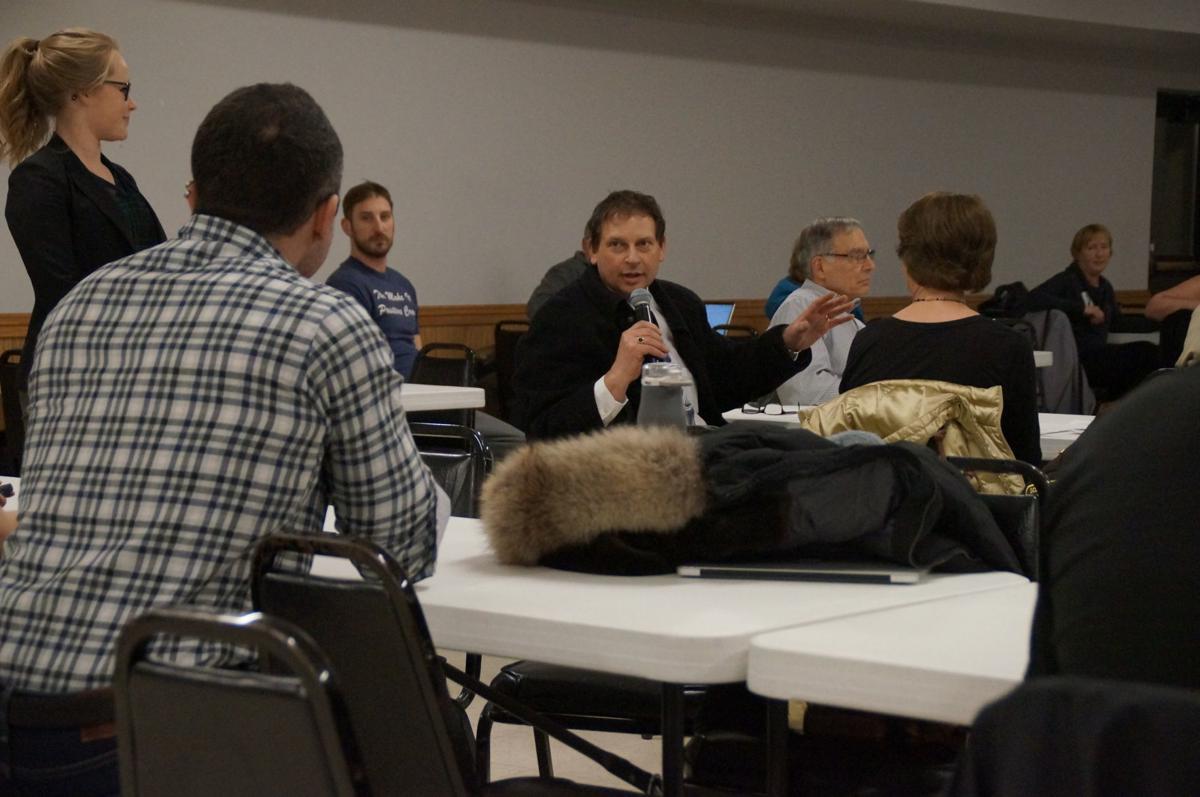 Scott County Attorney Ron Hocevar responded to a Shakopee resident who remarked that marijuana should be legalized for all. “That’s a slippery slope,” Hocevar said. 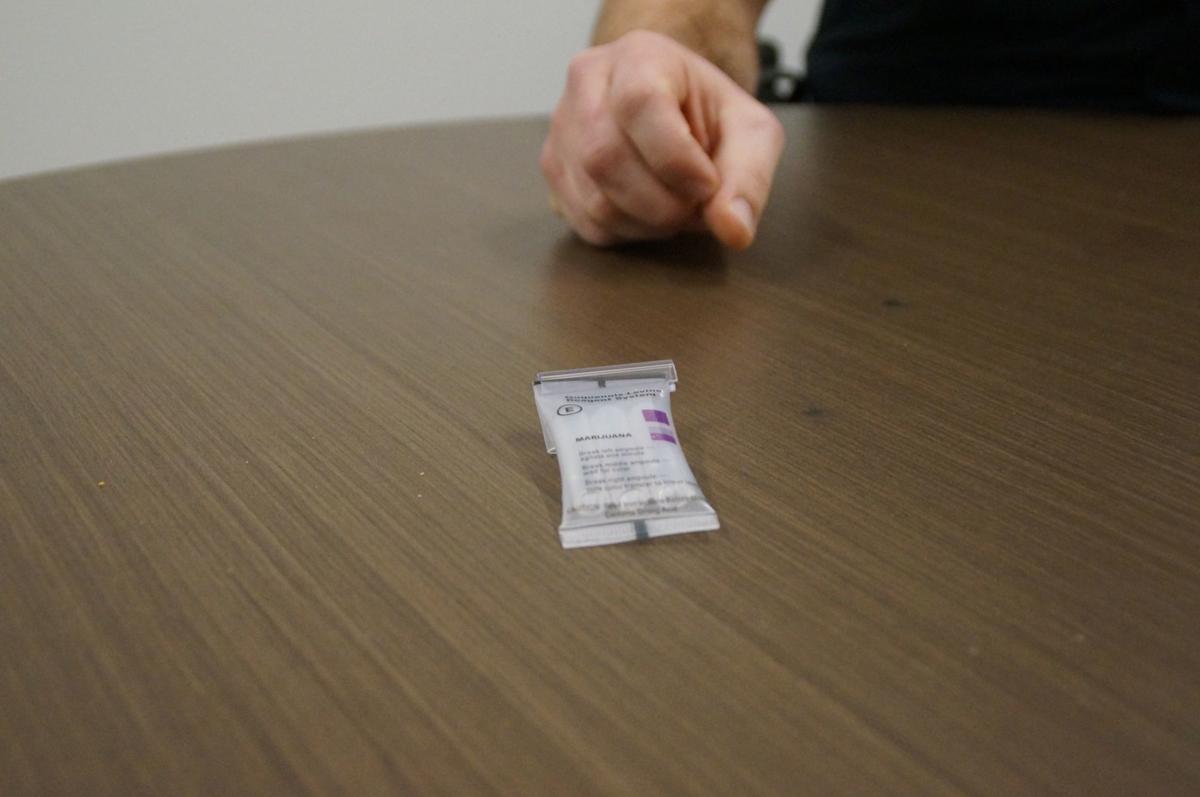 This marijuana testing kit used at Shakopee High School can determine probable cause as to whether a vaping cartridge contains THC or nicotine. School Resource Officer Michael McLain said without testing the cartridge, there’s no good way to differentiate between the two.

Scott County Attorney Ron Hocevar responded to a Shakopee resident who remarked that marijuana should be legalized for all. “That’s a slippery slope,” Hocevar said.

This marijuana testing kit used at Shakopee High School can determine probable cause as to whether a vaping cartridge contains THC or nicotine. School Resource Officer Michael McLain said without testing the cartridge, there’s no good way to differentiate between the two.

Dozens of people sat in rows at the Shakopee VFW Jan. 29 — some wearing shirts branded with images of a marijuana leaf, others with notepads and pens at the ready. One man who walked in late sat in the back of the room, crinkling a clear plastic bag full of gummies.

DFL House Majority Leader Ryan Winkler led a discussion on the legalization of marijuana in Minnesota -- an event organized by District 55A Rep. Brad Tabke. The conversation came as local and county governments poise for the possibility of statewide marijuana legalization, and what it could mean for law enforcement, local taxes and school districts.

At this particular meeting, Scott County Attorney Ron Hocevar and Sheriff Luke Hennen took their posts in the center of the room. As most attendees voiced their overwhelming support of the legalization of marijuana, the county officials sat mostly silent.

“Our goal is for cannabis to pay for itself,” Winkler said.

But law enforcement and government officials in Shakopee seem, at best, apprehensive to the idea. They say the legalization of marijuana could create ripple effects related to drug addiction and, as a result, drug-related crimes, which would cost more tax dollars long-term than local governments would initially save.

“We have seen in other states, that when they have gone to legalization, they’ve been able to shift resources to violent crimes and solve and convict in other arenas after legalization,” Winkler said. Across the room, heads nodded up and down.

But Shakopee Police Captain Jason Arras, who used to command the Southwest Metro Drug Task Force, said most violent crimes and thefts he sees in Shakopee stem from hard-core drug addiction — and most of those drug addictions are born from the gateway drug.

“Recovering addicts… they have given me a different outlook, because many of their story lines started out with marijuana.”

Arras said there are hundreds of other crimes that occur each year related to marijuana addiction or possession, such as theft and violent crimes.

In Minnesota, carrying more than 42.5 grams of marijuana is a felony. Anything below that is a petty misdemeanor — the same penalty as getting a speeding ticket.

“If we’re talking about decriminalizing marijuana, it’s already been done,” Arras said. “We don’t take people to jail on petty misdemeanors and misdemeanors.”

Shakopee resident Kayden Fox, who said he and his wife use marijuana for medical purposes, spoke up at the meeting in favor of the legalization of marijuana.

“This is a country based on civil liberties and freedoms,” Fox said. “People should be able to make choices for themselves… If it’s a plant and it’s for personal use, who is going to tell me what I can do with my own property?”

The room exploded with applause after Fox’s remarks, as Scott County Attorney Ron Hocevar raised his hand and offered a small response to Fox’s take on widespread legalization of marijuana.

“Your arguments could go to legalizing every single drug,” he said. “It’s a slippery slope.”

One of Hennen’s biggest concerns was roadside safety, adding he worries Scott County will see a significant increase in traffic deaths due to impaired drivers. He said when drivers are high, it’s far more difficult to detect their level of impairment.

“In Colorado, there was a 151% increase in traffic deaths,” Hennen said. “So are we willing to go there?”

A Savage resident who called himself a proponent of legalization spoke up at the marijuana listening session and asked the same question. “Do we have the tools in place to enforce this on the roads?”

Winkler responded, saying he agreed there is not a clear correlation between marijuana usage and measuring one’s level of impairment.

“If you are not following traffic laws and you’re pulled over, and the officer is trained to look for signs of impairment, then they can have probable cause for arrest and determine the impairment,” Winkler said. “But … it’s one of those things that requires further development.”

Shakopee resident and VFW member John Muir said at the meeting he thinks at the very least, medical marijuana should be available for veterans who suffer from post traumatic stress disorder.

Hocevar, who is a veteran himself and called himself “a big individual rights guy,” said at the meeting he wasn’t advocating for or against the legalization of marijuana, but was only interested in listening to the concerns of residents.

“As far as the legalization of cannabis, it’s going to happen,” Hocevar said. “The writing’s on the wall. My concern is public safety and public health. It’s not a victimless crime right now. It can be, but it’s not always."

Hocevar also said drug recognition experts are easily defeated in court, so proving someone has been impaired while driving in court is not easy.

“People always ask if there are drugs, and if the students will be safe,” Arras said. “I mean, how are we going to keep gummy bears out of it?”

Shakopee High School Resource Officer Michael McLain, who used to serve on the Southwest Metro Drug Task Force, said he usually deals with one or two marijuana cases at the high school each week. He said the percentage of students he deals with who use marijuana is very low.

But McLain has seen a rapid change in the usage of marijuana among teens: THC cartridges in vaping pens. Long gone are the days when teachers only needed to walk past a public restroom and breathe in the skunk-like smell of pot, he said.

“You don’t see the green, leafy marijuana anymore,” McLain said of the vaping cartridges, which often contain 99% THC oil. “This stuff is way stronger, and you can’t smell it.”

McLain said he believes if marijuana were to be legalized, more Shakopee students would use it, because it would be more accessible, which would in turn increase the number of students coming through his office who need to be sent to treatment.

“A cartridge with 99% THC leaves an opportunity for overdose,” McLain said. “People always do the next thing to get to the level they want to be at. If you can’t achieve that high, what is the next logical step?”

Winkler said it's unlikely law enforcement groups will come out say legalization is "a great thing."

"But we want to get to a point at least where we feel like their concerns are being addressed," he said.

Until that point, Scott County officials, Shakopee law enforcement officers and representatives at the Legislature will continue to prepare for the looming legalization of a drug they view as either vital or lethal to the community.