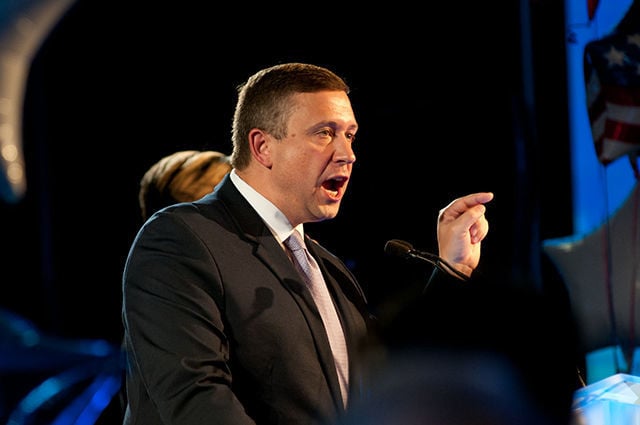 DFL Chair Ken Martin: “There is a lot of opportunity right now in the suburbs and the fast growing urban areas to win back the majority in addition to seats in Greater Minnesota. So I’m very buoyed by our chances.” 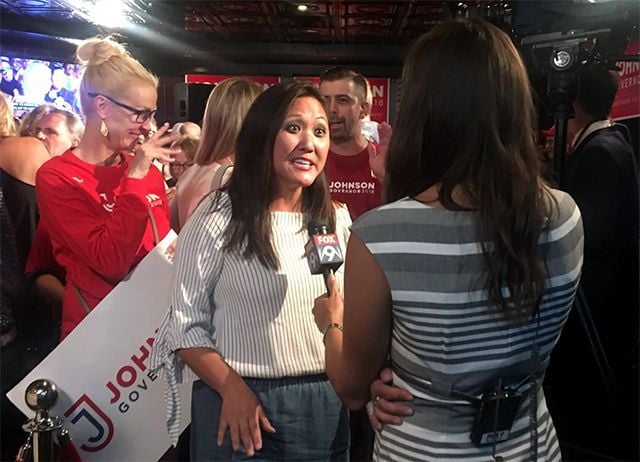 GOP Chair Jennifer Carnahan: “We didn’t have that big red sweep that we wanted. But it could have been a lot worse for Republicans.”

They were asked to assess the just-completed 2018 election — and to look ahead to 2020.

But it is hard to separate the views of Minnesota’s two major political party chairs from their own campaigns to continue to lead those parties.

DFL Chair Ken Martin has announced he’s running for a fifth term as chair of the DFL, and an election postmortem is much more pleasant for him. His party just completed a sweep of both U.S. Senate seats, won all five statewide elected offices and regained control of the Minnesota House of Representatives.

And while Democrats lost two congressional districts they had held — one in northern Minnesota, and in southern — it also won two GOP seats in suburban Twin Cities, victories that likely contributed to winning suburban legislative seats that made the difference in the state House.

“Every statewide DFL candidate received over 1 million votes, which was the first time ever in our party’s history,” Martin said in a post-election press conference. “Minnesota gave the DFL a mandate, and it’s up to our elected officials now to deliver on that. I’m absolutely confident they’ll do that.

Acknowledging the obvious for the GOP

GOP Chair Jennifer Carnahan, despite her party suffering some high-profile losses last week, still makes a case for what would be a second term as head of the party. And though she hasn’t declared her candidacy yet, Carnahan’s words sound like something she might be repeating to GOP committee members before they vote again on party chair in April.

Republicans, she said, were facing a historic trend: The president’s party always does poorly in the first midterm election.

“We always see a pendulum swing and a loss of seats on a national level and unfortunately we incurred some of that here in Minnesota,” she said in an interview. “So I think what we saw was not out of the norm. It was certainly disheartening and disappointing because we were hoping for different results this election cycle.”

But Carnahan also said the party is now on a better financial and organizational footing.

“When I go back and look at where this party was 18 months ago when I came in as chair, we were a party that was fragmented. We weren’t united, we weren’t financially resourced appropriately and we had some messaging flaws and opportunities,” she said.

The debt has shrunk, she said, and the party was able to raise enough money to fund efforts to identify voters and get them to the polls. That effort, she said, made 1 million voter contacts — via direct mail, door-knocking and phone calls — that helped GOP candidates, she believes. But it wasn’t enough, in many cases, to overcome deficits in individual races.

Democrats raised more money and made more contacts, she said. And she lamented that the GOP nationally does not have a digital fundraising operation like ActBlue, an organization that funnels money from national Democratic donors to state races.

The most recent reports to the state Campaign Finance Board, which don’t include the final two weeks of the election, show the DFL raised $13 million while the state GOP committee raised $728,500. The Republican Party of Minnesota still has a debt of $195,000.

But while Republicans talk about being outspent — and they were overall — the money for Democrats in Minnesota was concentrated in the congressional contests and the race for governor. In the battle for the state House, Republicans had a clear spending advantage.

Carnahan acknowledged the obvious: that Republicans struggled in suburban congressional and legislative districts. In addition to Phillips in the 3rd Congressional District and Craig in the 2nd, 16 of the 18 state House pickups by the DFL were in the suburbs and exurbs around the Twin Cities.

“And it’s that middle — the independent, the swing voters — they’re the ones that decide elections in Minnesota,” she said.

Carnahan’s first real foray into politics was her own campaign for the state Senate District 59 in 2016. She knew a Republican couldn’t win in the Minneapolis district, but she wanted to see if she could boost the GOP vote — a test to see if Republicans efforts could at least partially mitigate the boost urban voters give statewide DFL candidates.

Now, the same problem faces the GOP in the suburbs, where the large DFL vote totals boosted statewide success.

Have Republicans lost the suburbs permanently, as some have suggested?

“I don’t think the suburbs have shifted to all of a sudden becoming Democratic strongholds,” Carnahan said. “I think we have a lot of Republican voters in the suburbs still. I think there is a lot of opportunity for us to get back in there and reclaim some of these seats in 2020.

“It was a shock to me to see that we lost a seat in Maple Grove,” she said. “I grew up there. I know a lot of people there. That’s still a Republican suburb. Plymouth? It was very shocking. Scott County, Carver County, these are all Republican areas and you know, we just have to continue to make sure that we’re crafting the right message, connecting with the voters.”

Carnahan is reluctant to put the loss of suburbs on President Trump, saying the GOP would have suffered losses with any Republican president in office. She said the same of Jeff Johnson as the GOP nominee for governor. She said she thinks voters are smart enough to look at local candidates differently and will make that case between now and the next election, if she is given another term as chair.

“We get out there and start working it and we recruit great candidates that fit their districts, that can deliver a compelling message in a way that connects and resonates with voters,” she said of 2020. “And I think when we put all those pieces in place, I think we’re going to see a shift back towards the red in two years.”

Martin disagreed with Carnahan’s take on Trump, saying he was definitely a factor, though most DFL candidates from Gov.-elect Tim Walz down did not dwell on the president.

“There’s no doubt that Donald Trump’s message of fear and hate and divisiveness did not resonate with Minnesota voters,” Martin said. “You saw that throughout the state. But I think one of the biggest lessons in 2016 is that we fell into the trap of running against Donald Trump or running against Republicans and not giving Minnesotans a sense of what we would do to improve their lives. It’s health care, education, infrastructure, transportation. We focused on the things that people had the most anxiety about and wanted government to provide solutions for.”

And while not claiming the suburbs and exurbs as permanent DFL territory, Martin said they will likely be the route to winning the one thing the DFL did not claim this election: control of the state Senate. Only one Senate seat was up this year, a special election in the very Republican 13th District. But all Senate seats are on the ballot in 2020.

“I will tell you that what we saw on Tuesday gives us a clear path to winning the Senate in 2020,” Martin said, starting with two metro-area districts, the 44th and 55th. Both of those districts elected two DFL House members and yet are still represented by GOP senators, elected in 2014.

“There is a lot of opportunity right now in the suburbs and the fast-growing urban areas to win back the majority, in addition to seats in Greater Minnesota,” he said. “So I’m very buoyed by our chances.”

But just as the GOP is wondering what happened in the suburbs, Democrats are struggling with another poor showing in Greater Minnesota. While the 8th Congressional District in northern Minnesota was not close, the narrow loss in the 1st CD likely will sting.

“That’s probably the flip side of the coin,” Martin said. “While we enjoyed a lot of success on election night, we certainly could have done better in Greater Minnesota. But it wasn’t for lack of effort. We invested a lot of time, energy and money. You can see neither party was ignoring Greater Minnesota.”

In hindsight, Martin said he thinks Joe Radinovich waited too long to respond to attacks on his background, including some minor criminal offenses and numerous driving and parking violations.

In the 1st, Martin said there probably needed to be more effort at “defining” GOP winner Jim Hagadorn and more campaigning around the issue of tariffs on agricultural products that result from the trade war with China.

“People who farm in southern Minnesota are really disappointed in Trump on the tariffs,” he said.

Martin is unlikely to face serious challenges at the party committee meeting in March to choose a chairman.

‘It could have been worse’

Carnahan is coming off a less-successful election, for which she’s already faced some criticism.

“We didn’t have that big red sweep that we wanted,” she conceded. “But it could have been a lot worse for Republicans. There’s no point in tearing the house down just because things didn’t turn out exactly as we had hoped.”

Carnahan said she thinks the GOP needs continuity in leadership, even though she would not say whether the only candidate who could provide continuity, Carnahan herself, was a candidate.

“We look at our counterparts over to the left and Ken Martin’s been chair for eight years. I think it does a disservice to our party when we continue to have changes in leadership because when you have significant shifts at the top, it’s hard to continue building out a long-term strategy and executing on that strategy.”

She said her first phase was to get the party in better shape financially and organizationally and to begin showing a positive and optimistic face to the public.

“Now we have to take that to the next level and we have to start building some of these coalitions in Minnesota.”

MinnPost is a nonprofit, nonpartisan media organization whose mission is to provide high-quality journalism for people who care about Minnesota.

MinnPost is a nonprofit, nonpartisan media organization whose mission is to provide high-quality journalism for people who care about Minnesota.