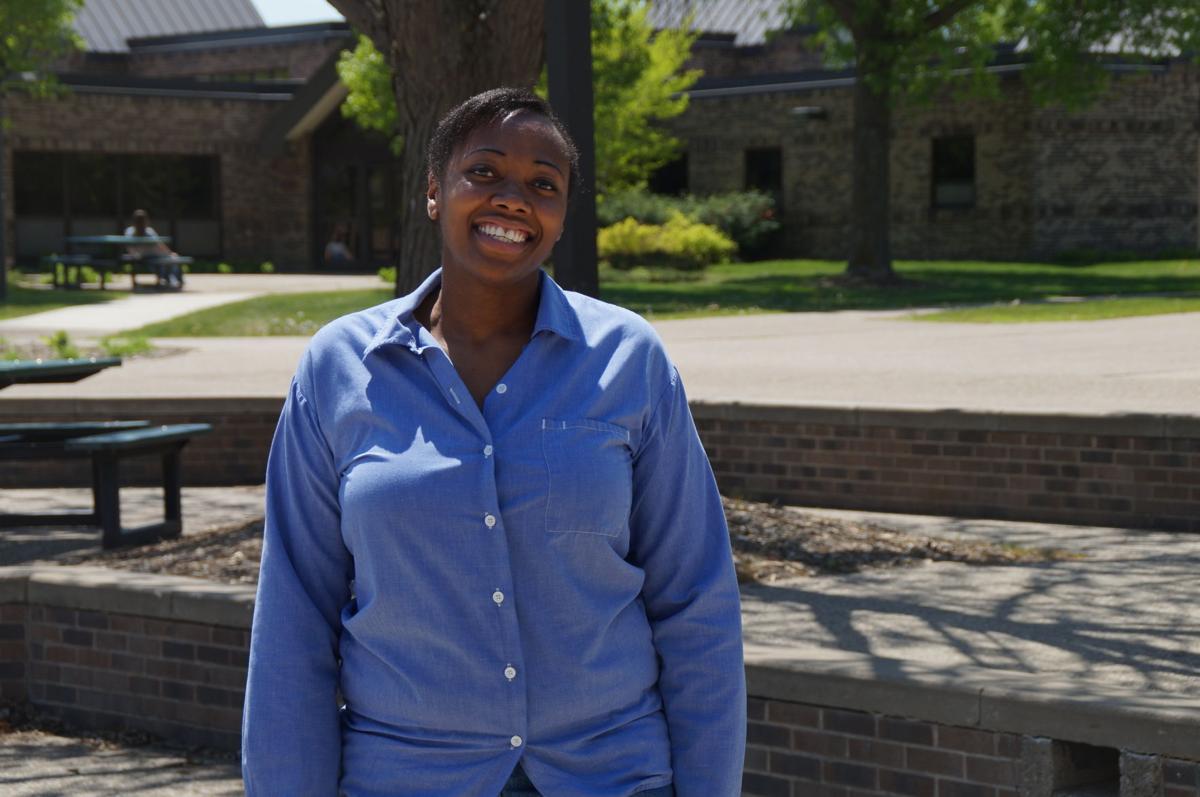 Maureen Onyelobi, at the Shakopee Correctional Facility, is the first known woman to take the LSAT while incarcerated. 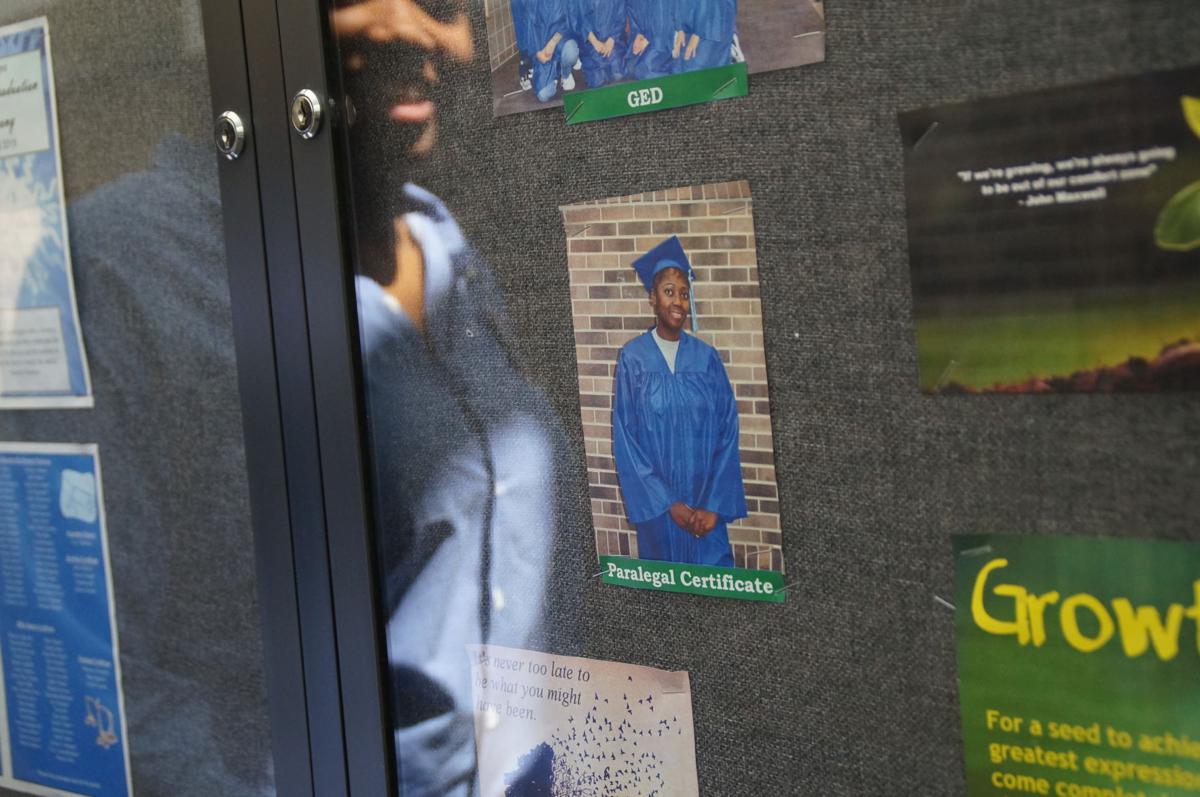 Maureen Onyelobi’s photo is on display at the Shakopee Correctional Facility from the day she received her paralegal certificate. Because she received the certificate in prison, it was non-accredited, but a new program called the Prison to Law Pipeline is trying to change that.

Maureen Onyelobi, at the Shakopee Correctional Facility, is the first known woman to take the LSAT while incarcerated.

Maureen Onyelobi’s photo is on display at the Shakopee Correctional Facility from the day she received her paralegal certificate. Because she received the certificate in prison, it was non-accredited, but a new program called the Prison to Law Pipeline is trying to change that.

Maureen Onyelobi always dreamt of becoming a lawyer. That seemed like a tall task for a first-generation Nigerian immigrant who had to relearn how to walk after she was caught in a house fire at age 10.

And now, the prospect of becoming a lawyer should be even more impossible.

Oneylobi is nearly seven years into her life-without-parole prison sentence at the Shakopee Women’s Correctional facility, after she was charged in 2014 with aiding and abetting first-degree premeditated murder in the drug-related shooting of Anthony Fairbanks in Minneapolis.

She got caught up in the wrong crowd after she fell in love with a man who was addicted to heroin, she said. And it derailed nearly all her plans.

But she’s still hanging onto one dream that’s now attainable for her, even though she’s behind bars. Last month, Onyelobi was the first known incarcerated woman to take a law school admittance test, thanks to a new program called the Prison to Law Pipeline.

Onyelobi doesn’t look or talk as though she’s got a life sentence ahead of her. She stands taller than 6 feet, wears bright-white Under Armor tennis shoes and has a booming laugh you could hear from down the hall. On May 17, the day of her interview with the newspaper, she wore a denim shirt, eyeliner and a floral mask.

“This place is what you make it,” she said.

For Onyelobi, that means she’s still studying to become a lawyer — and thanks to a newly-launched program called Prison to Law Pipeline Program, she’s set to take the LSAT behind bars mid-June — for the second time while she’s been incarcerated, and the third time in her life.

Nonprofit organizations called All Square and Until We Are All Free have partnered with Mitchell-Hamline Law School and the Minnesota Department of Corrections to launch the pipeline program, with the goal of establishing the first American Bar Association-accredited law and paralegal degree opportunities for inmates.

The program is still in its very early stages. Onyelobi and one inmate at the Stillwater Correctional Facility are the only two participants right now, though the goal is to expand the program.

To the organizers’ knowledge, it is the first time an LSAT has ever been proctored within any U.S. prison, according to the Department of Corrections Education Director Kristen O’Connell.

Mitchell Hamline Dean Anthony Neidwiecki said the program was an easy fit for the law school, which was already set up to provide remote education for law students, and has already done social justice work with All Square, which invests in formerly incarcerated leaders.

Right now, Onyelobi is a liaison for the pipeline program, meaning she meets with organizers to discuss the program’s future and help educate other inmates at her facility.

The idea is for Onyelobi and other inmates to pass the LSAT and get into Mitchell Hamline Law School, but first, Niedwiecki said the pipeline program needs to be approved by the American Bar Association. As it stands, students cannot receive a completely remote law degree. The ABA had to make an exception just for Onyelobi to be able to take a proctored LSAT on paper at the Shakopee Correctional Facility.

Onyelobi said last month when she took the LSAT she was “too nervous” and couldn’t think straight. Her score was far lower than the scores she was getting in her practice exams.

“The ability to get individuals into law school while they’re currently incarcerated… This isn’t happening anywhere else,” O’Connell said. That meant Onyelobi likely felt a lot of pressure while she took the exam, she added.

She’ll get a second chance at the exam on June 12.

Onyelobi has already taken the entrance exam twice before. The first time was in her 20s, before she was sentenced to prison, though it wasn’t high enough to get into law school. She decided to pursue a master’s degree in creative writing instead — that is, until she was sent to prison.

This time around, she has a tutor who is volunteering her time to help Onyelobi pass. She got a new job in facilities maintenance at the prison, with nighttime hours so she can study during the day. And she will keep trying until she passes.

Onyelobi said had she been educated enough to know how to better navigate the legal system, she believes she could have received a lesser sentence than life without parole.

Onyelobi said being in prison has opened her eyes to the racial injustice that occurs within the justice system.

“The statistics don’t lie,” she said. “I’m living it. You can’t learn this experience in a classroom.”

Onyelobi has been at the Shakopee prison for nearly seven years now. She said she’s been educating herself on the law ever since, and helping other inmates understand their own sentences.

“I’ve helped several women with their appeals,” Onyelobi said. “It’s rewarding to help other people. I care about others and I feel more worth now than I did before.”

According to the Minnesota Department of Corrections, nearly 40% of individuals admitted to correctional facilities do not have a GED or high school diploma.

Earning a post-secondary degree while in prison, according to the DOC, reduces new offense reincarceration by 24%.

Onyelobi said the ability for herself and her peers to receive law degrees while incarcerated would change the justice system from the inside-out. When incarcerated individuals know how to communicate with their lawyers, how to navigate the justice system and what rights they have, they give themselves a better chance to win their appeals or cases.

“This is a legal revolution,” Onyelobi said.

Emily Hunt Turner, the CEO of All Square, said in a press release that the legal discipline has already benefited from formerly and currently incarcerated legal scholars.

“The Prison-to-Law Pipeline will build on this expertise by formalizing accredited pathways to legal education,” Turner said, adding it would be “a step towards healing the effects of flawed and racialized legal processes.”

“The justice system has some particular problems related to race. We know that more people of color are incarcerated at a higher rate than white people,” Niedwiecki said. “We want to do our part in trying to dismantle any types of systems that perpetuate this disparity. One of the things we can do is give incarcerated people the tools to understand the law, and to fight for justice, and to fight for changes in the justice system that could affect them.”

Despite her life without parole sentence, Onyelobi has hopes and dreams of being pardoned. But even if she remains in prison for the rest of her life, the Prison-To-Law pipeline program has restored her sense of purpose, she said.