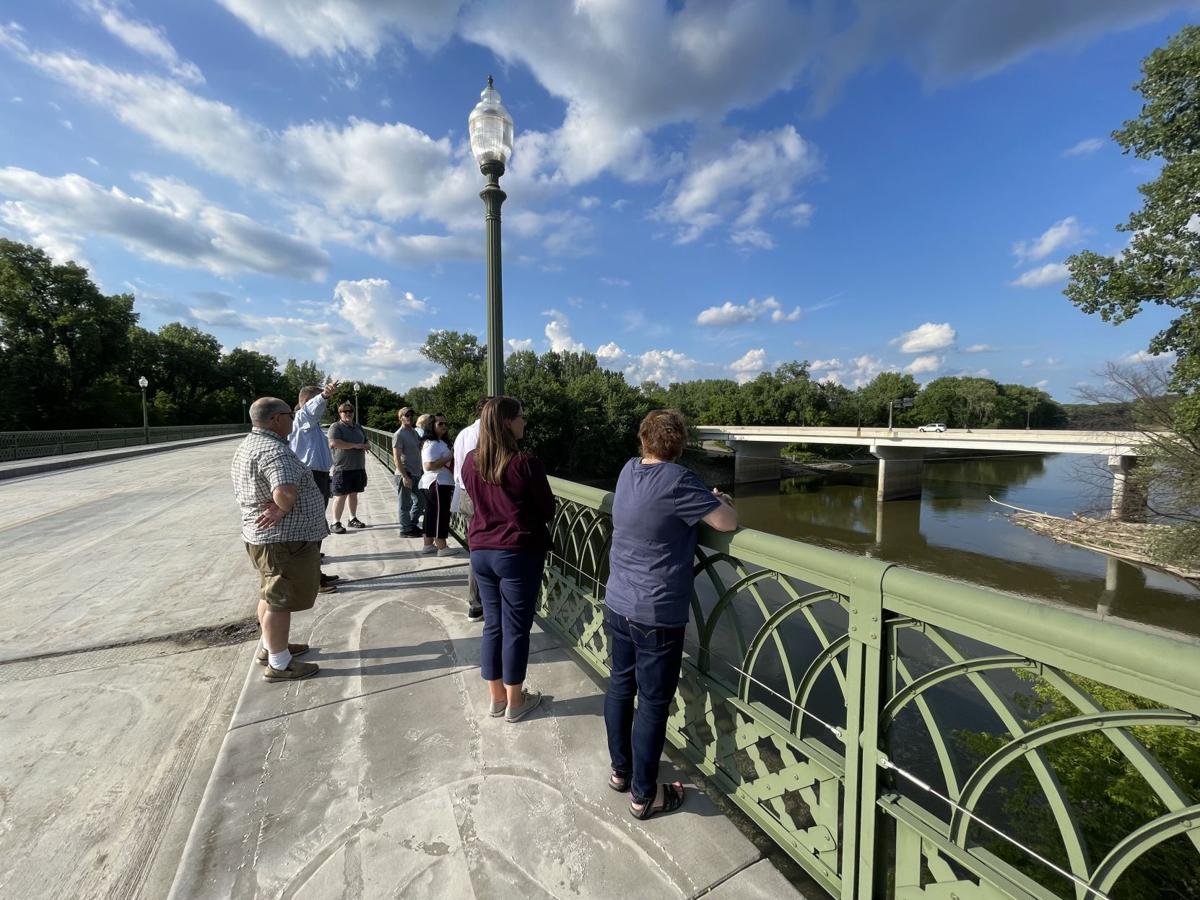 Shakopee city officials look out at the Minnesota River where it needs to be stabilized as part of a capital improvements tour on June 29. 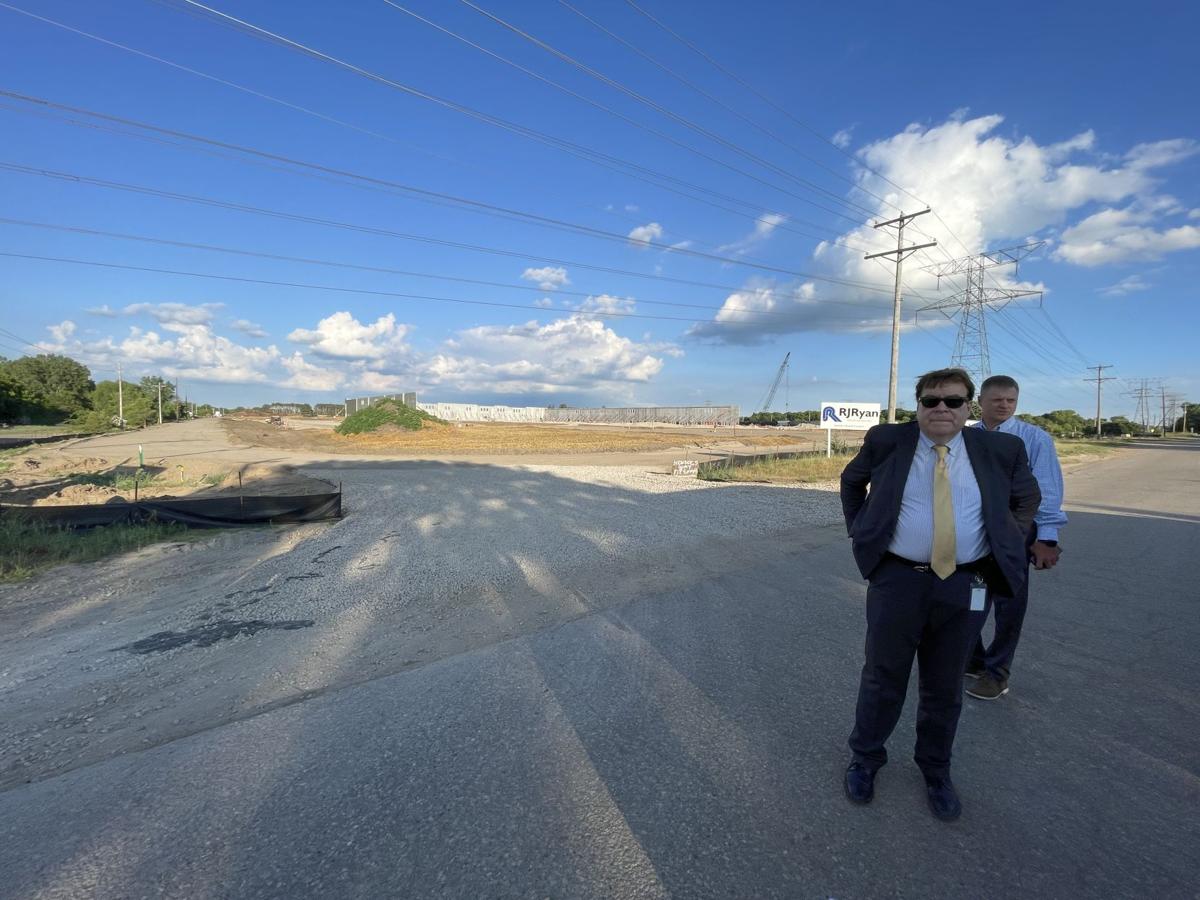 Shakopee Director of Planning and Development Michael Kerski and City Engineer and Public Works Director Steve Lillehaug stand in front of the construction of a speculative warehouse June 29, which is being constructed by The Opus Group.

Shakopee city officials look out at the Minnesota River where it needs to be stabilized as part of a capital improvements tour on June 29.

Shakopee Director of Planning and Development Michael Kerski and City Engineer and Public Works Director Steve Lillehaug stand in front of the construction of a speculative warehouse June 29, which is being constructed by The Opus Group.

On June 29, members of the Shakopee City Council and city staff hopped on a bus and took a tour of the city to receive updates on developments, projects and plans coming down the pipeline.

The capital improvements tour was a short version of Shakopee’s newest (and new-and-improved) buildings, parks and trails.

There’s a lot going on, so even the “short version” took two hours. Granted, 10 minutes were spent waiting for the train to move off Stagecoach Road (if you know, you know).

Texas Roadhouse, a Western-themed restaurant that specializes in sirloin steaks and is also known for its hot rolls and homemade cinnamon butter, submitted an application to the city in May 2020 to be located on the east side of Shakopee at 8160 Old Carriage Court N., in the Southbridge development. According to the city’s Director of Planning and Development Michael Kerski, the restaurant expects to open in October.

The city approved a permit for Planet Fitness to open a new facility at 1633 17th Ave. E. However, Kerski said at this time the city doesn’t know whether the exercise gym still plans to move forward, so the timeline is unknown at this point.

A new bridge now connects Memorial Park to the Minnesota Valley State Trail after it was removed several years ago due to structural issues. In a few weeks, the bridge will be open to the public.

Because the Memorial Park area is culturally and archaeologically sensitive due to the presence of Native American burial grounds, the site was surveyed and analyzed by archaeologists last summer, according to the city.

Also changing at Memorial Park will be the removal of the playground and picnic shelter due to the burial grounds underneath those structures.

“It’s a cemetery,” City Engineer and Public Works Director Steve Lillehaug said. “So it’s important to, I think, work with partners and restore some of those things.”

The total cost of the project was about $900,000, according to Lillehaug, and should be completed by the end of July, when there will be a ribbon-cutting ceremony.

On June 15, the city council gave staff approval to seek the funding needed to restore the historic Schroeder House, located off Bluff Avenue in Shakopee, and the outbuilding into two event venues, with the goal of converting the house and its outbuilding into spaces that could host smaller meetings and gatherings near the river.

Some of the foliage would be cleared to offer a more unobstructed view of the river. The historic streetscape would also be restored with a new replica fence and parking would be provided for both the buildings and the park.

The restoration is part of the city’s overarching cultural corridor plan for the Minnesota Riverfront, which would help stabilize, activate and highlight the river and its cultural significance.

On June 29, a federal appropriations subcommittee approved U.S. Rep. Angie Craig’s $3.5 million submission for the city of Shakopee to receive federal funding for riverfront stabilization along the Minnesota River.

Over the past few years, city officials and experts on the Minnesota River have become increasingly concerned that if the riverbank in Shakopee isn’t stabilized soon, a rising river could erode the nearby Native American burial mounds and damage vital sanitary sewers that service the western part of the city.

The advancement of the project means there is a high likelihood that the city will be allocated the $3.5 million, according to a spokesperson for Angie Craig.

The funding was requested earlier this year to protect the city’s infrastructure from riverbank erosion.

“Shakopee’s River Stabilization and Cultural Corridor Project is critical to preserving and stabilizing the city’s riverbank for years to come,” Craig said in a July 1 press release. “I am proud to champion this long overdue project in Congress and to fight for its funding in the final appropriations package later this year.”

The city also plans to add a pedestrian crossing across Highway 101 into downtown Shakopee.

The neighborhood will continue to expand, city officials said, under developer D.R. Horton, who typically does not build homes until they’ve first been sold. And they’ve been selling like hotcakes.

A trail system already snakes through the entire neighborhood, even through lots that haven’t been developed.

“The one really unique thing about Windermere is D.R. Horton, (which) from day one, built the entire trail system,” Kerski said.

Be on the lookout for new interchanges between Marystown Road and U.S. Highway 169, as well as the intersection at Vierling Drive and Adams Street, where crashes are trending upward.

The city is seeking funding and approval for the reconstruction of the intersections into four back-to-back roundabouts at the corridor, where there are other traffic issues including pedestrian gaps that separate residential and school areas on the south side of U.S. Highway 169 from parks and Hy-Vee on the north side.

The problem will continue to grow as infrastructure in the area expands, the city said. The Trident development off Marystown Road, which is home to the new Veterans Affairs clinic, will eventually cause “significant” traffic delays when fully built out. That could mean up to a three-minute wait for cars at the southerly U.S. Highway 169 ramp intersection.

“Over time, the intersections will degrade and it will mean delays, and what that ultimately means to me is accidents,” Lillehaug said earlier this spring.

One of the city’s largest new developments will start sprouting homes this fall.

In May, the city council approved 288 housing units in the form of villas, single-family homes and townhomes, as well as 300 apartment units to be constructed just west of the Killarney Hills neighborhood, south of U.S. Highway 169 and north of 17th Avenue.

Summergate Companies, LLC, is the developer proposing to develop the 115 acres of agricultural land.

The development will include public open spaces with pedestrian trails for residents, and accessibility to the future park improvements proposed at Killarney Hills Park.

The Opus Group completed construction this spring on a 130,000-square-foot warehouse building that will house the offices, warehousing and distribution center for Cherne Industries, a plumbing product manufacturer.

Last summer, the Shakopee City Council approved a property tax abatement to incentivize Cherne to relocate its offices and warehouse space from Minneapolis to Shakopee, bringing new jobs to the area.

Under the abatement conditions, Cherne is required to create an additional 50 jobs at its Shakopee facility throughout the next five years, as well as preserve its existing 115 full-time equivalent jobs. The average hourly pay for Cherne employees is in the ballpark of $20 per hour, excluding executive payments and benefits.

If you’ve noticed the massive warehouse near the Amazon distribution center, it’s likely growing larger each day. The building is being constructed by WPT REIT and will be a speculative warehouse to the north of Cherne and will be used as a 500,000 square foot distribution center. That’s about the same size as the neighboring Amazon facility. The project is one of the largest speculative projects in the state, Kerski said.

There are no tenants that have been identified yet for the speculative distribution center, which should be completed by December of this year. That warehouse will be accessible via Stagecoach Drive.

KEB America, a company that manufactures automation products, completed an 80,000-square-foot building expansion of its U.S. headquarters off Valley Industrial Boulevard in Shakopee earlier this year.

The expansion of the facility increased machining capacity and storage space to meet the growing demand of automation products in the country, a news release from the company said.

The Shakopee City Council approved a $289,000 tax abatement to help KEB America expand in July 2019. The agreement was contingent upon the company maintaining its 98 full-time jobs and adding 34 jobs in five years.

Stay on the lookout for the last of the 59 Stagecoach lots at Southbridge to be completed this year, where the city council also recently approved a concept plan for the new Stagecoach Park in east Shakopee.

The plan calls for a mostly passive open space with natural and paved trails, a small turf lawn area, picnic and grilling area and small parking lot. The park land was donated by the developer as a way to preserve the oak savanna.