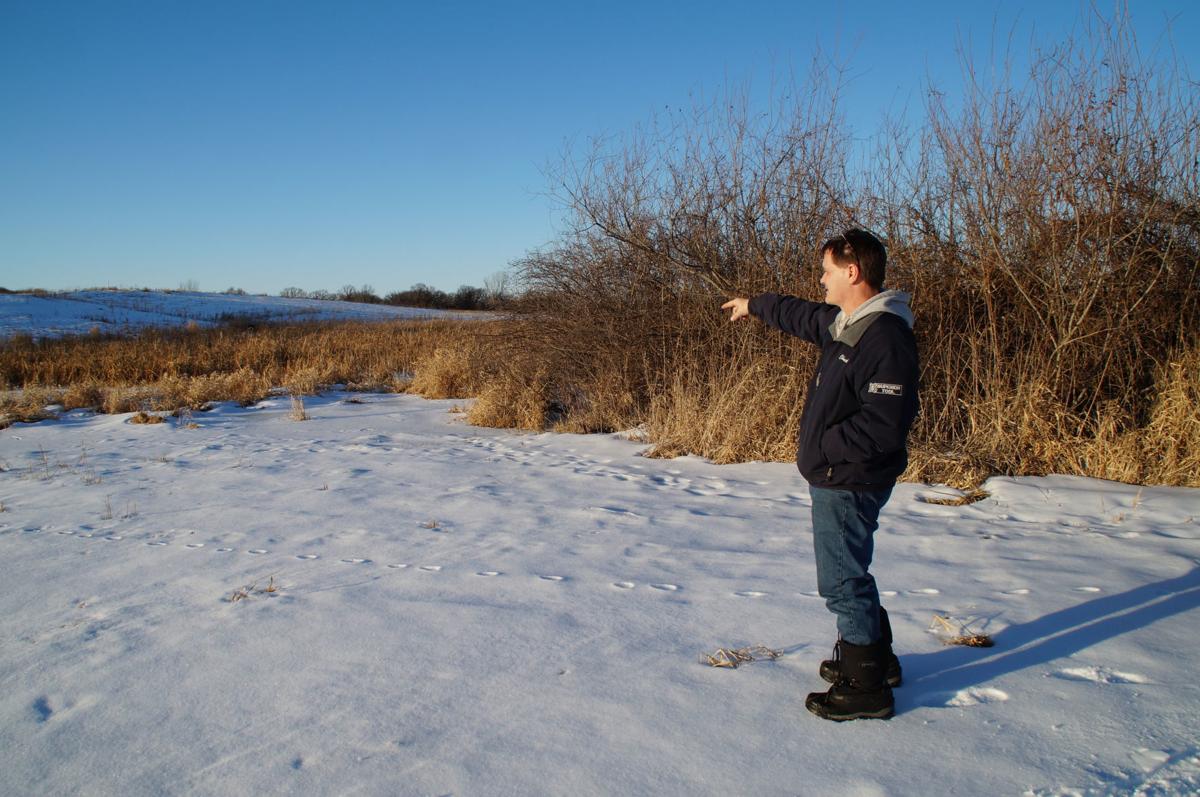 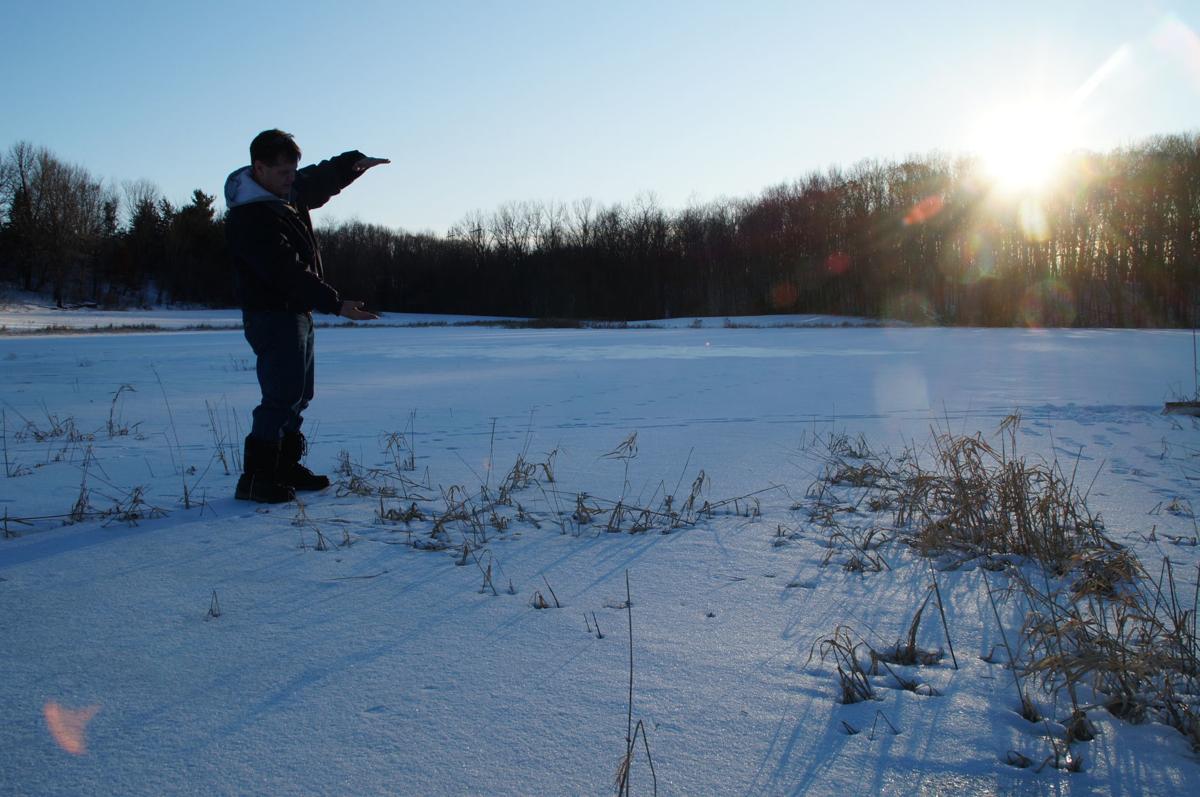 Chuck Doherty, who has power of attorney over his mother Beverly Doherty, shows how thick the ice at the end of his mother’s farm is. The water never used to be there, he said, until the Shakopee School District began construction on the adjacent high school. The Doherty family has opened a lawsuit against the school district, claiming the construction damaged drain tile that once kept the Doherty farm land dry. The school district denied liability and said its contractor, S.M. Hentges and Sons, was responsible for any damages.

Chuck Doherty, who has power of attorney over his mother Beverly Doherty, shows how thick the ice at the end of his mother’s farm is. The water never used to be there, he said, until the Shakopee School District began construction on the adjacent high school. The Doherty family has opened a lawsuit against the school district, claiming the construction damaged drain tile that once kept the Doherty farm land dry. The school district denied liability and said its contractor, S.M. Hentges and Sons, was responsible for any damages.

On Jan. 7, longtime Jackson Township resident Chuck Doherty stretched his arm across a vast expanse of land he used to work on as a boy, before Shakopee’s growth ate up much of its girth and before the adjacent acreage was flattened to make room for baseball fields for the new Shakopee High School.

Chuck Doherty drove his four-wheel-drive truck over piles of packed-down snow toward a pond of frozen water he said started to accumulate after the school district built the new high school.

“This happened basically overnight,” Chuck Doherty said of the water.

Chuck Doherty keeps a flip phone in his pocket and uses an “aol.com” email address. He makes comments about government spending, and talks about corn stalks like everyone knows tillage in wet conditions is bad news for newly-planted seeds. And he’s caught in the crux of a predicament many people familiar with agriculture have dealt with: surrounding developments are impacting his mother Beverly Doherty’s farmland, and his family claims it’s costing her tens of thousands of dollars.

Beverly Doherty owns the property off Townline Avenue in Jackson Township, adjacent to the newly-expanded Shakopee High School, and rents it out to a farmer, who grows corn on the usable 16 acres of land. The remaining 2.5 acres of the Doherty land has been inundated with water and is essentially useless now, Chuck Doherty said, but it used to be land that harvested hay.

On Nov. 18, 2019, Doherty filed a lawsuit against Shakopee Public Schools.

how they do it’

Beverly Doherty claimed she lost more than $50,000 since the new Shakopee High School was constructed due to the flooding of her cropland off Townline Avenue, according to civil court documents filed in Scott County. She alleges the flooding is a direct result of the construction of the high school — claiming drain tile that used to keep her land dry was damaged.

Chuck Doherty has been at the forefront of the issue since 2017. He said he didn’t want his mother to have to deal with the stress of handling the contractors, school district officials, lawyers and paperwork, so he and his sister Michele Doherty assumed power of attorney over their mother. Beverly Doherty is listed as the sole plaintiff in the lawsuit. She declined to comment for this story.

Drain tile is a common form of infrastructure found beneath farmland, according to watershed experts, and it is essentially a perforated pipe that drains water to prevent buildup and allows for more consistent harvests. The Doherty family claims there is no denying drain tile exists beneath the property.

According to court documents, Shakopee Public Schools turned the lawsuit over to its contractor, S.M. Hentges and Sons, as a third-party defendant, but the company will also deny liability for any damages, according to its response filed in court.

According to the filed complaint, in the summer of 2017, Beverly Doherty noticed that the western end of her cropland was not draining as usual, and her hay crop — which she used to lease to a farmer every summer — suffered. By the spring of 2018, Beverly Doherty’s property had a pool of standing water up to three feet deep across 2.5 acres of her property, blocking access to the western end of her lot.

The standing water stretches onto the new school property, and Doherty’s property did not drain at all during the 2018 season, the complaint said. She and Chuck Doherty claimed to have lost all the crops planted on the 2.5 acres of flooded property — crops that have grown consistently since 1963, when the Doherty family purchased the farm.

The complaint says Beverly Doherty has “been damaged in an amount in excess of $50,000, the exact amount to be proven at trial.”

Chuck Doherty said drain tile along his family’s property had always prevented it from excessive water buildup. He said he used to dig trenches near the ditch to make sure the tile remained unclogged when he was a child.

“The bottom line is, they need to get that water off the property, and we don’t care how they do it,” Chuck Doherty said.

But before the problem can be solved, it needs to be proven.

Beverly Doherty would have to prove that the drain tile exists before any entity can take responsibility for the property flooding, according to emails exchanged between Chuck Doherty and Scott County Water Management. That property now belongs to the school district, so Doherty said he can’t drill into the land on his own dime because he would then be liable for any damage he might make to the district’s property.

And Doherty claims the contractor and school district would have no reason to prove the drain tile exists on the district’s property, because if it does exist, someone would have to fix the problem.

According to emails between Doherty and Chris Ziemer, a project manager with ICS Consulting who was a middleman between the school district and the contractor, there were attempts to find the drain tile in 2017, and Ziemer wrote that there were several photos taken on site to prove no drain tile could be located. But Doherty said even if they did attempt to find the drain tile, the effort was made in vain.

S.M. Hentges and Sons deferred any comment about the Doherty property to its attorney Steven Sheridan, who said the company performed its work within the qualifications, and it is not aware of any alleged problems with the development causing the flooding.

Scott County Water Resource Engineer Megan Tasca started working on this project nearly two years ago. She said she met with Chuck Doherty on the site property and attended at least one meeting to help facilitate a discussion about the issues he claimed were caused by the school district property. While she declined to comment on the Doherty project specifically, she said in general the county runs into issues with agricultural properties that are being developed.

“A lot of these crop lands have drain tiles installed, and unfortunately there’s very rarely good maps or evidence that they exist,” Tasca said. “So when a contractor comes in, the county doesn’t maintain drain tile records. And unless the property owner… is very specific, we assume there’s no drain tile out there.”

In other words, the county gives contractors the go-ahead to dig unless there are specific instructions laid out by the adjacent property owner that there is drain tile to avoid.

Tasca said if drain tiles are found during construction, the county helps work with the project manager on creating a redesign.

“But unfortunately a lot of these tiles are very old, and they’re made of clay,” Tasca said, meaning they are especially difficult to locate. Clay drain tiles are easy to crush with a bulldozer, and they can’t be located with a metal detector, she said.

Beverly Doherty declined to comment on the specific lawsuit, but Patrick Burns, her attorney, said the school district “caused runoff and damaged existing drain tile,” which is what Doherty is suing for.

The trial date between Beverly Doherty, the Shakopee School District and S.M. Hentges and Sons is scheduled for Nov. 18 in Scott County District Court.