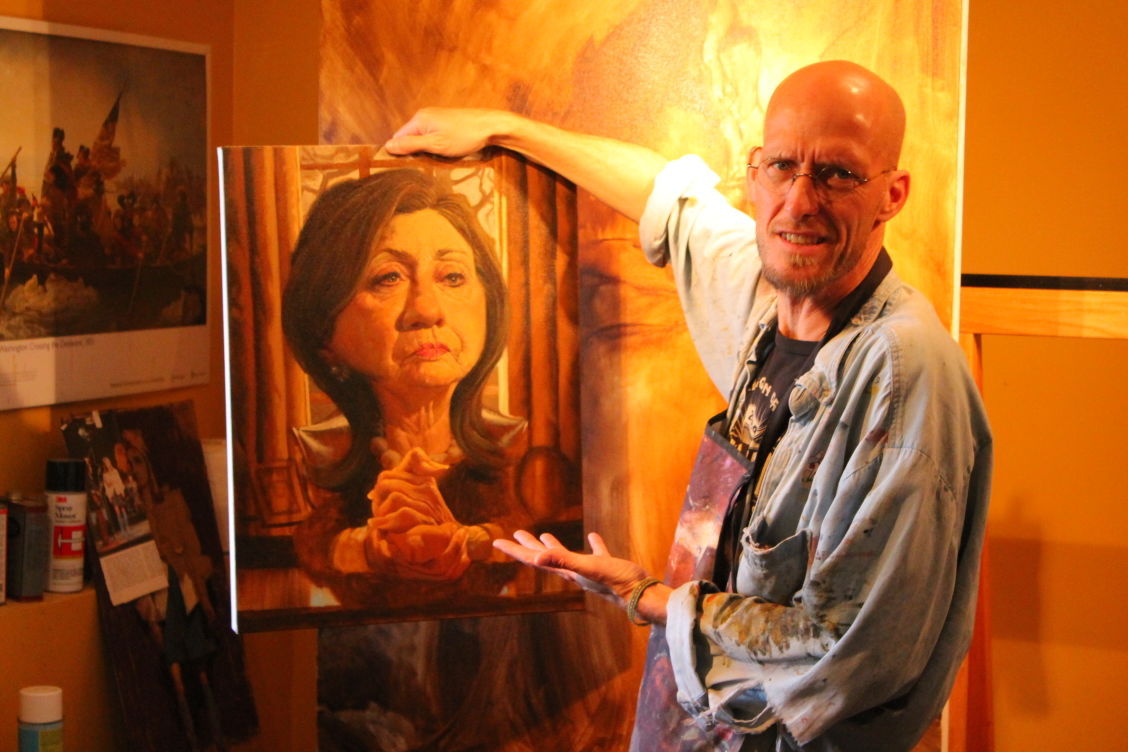 Thomas Fluharty shows a painting of Hillary Clinton at his studio in Prior Lake. 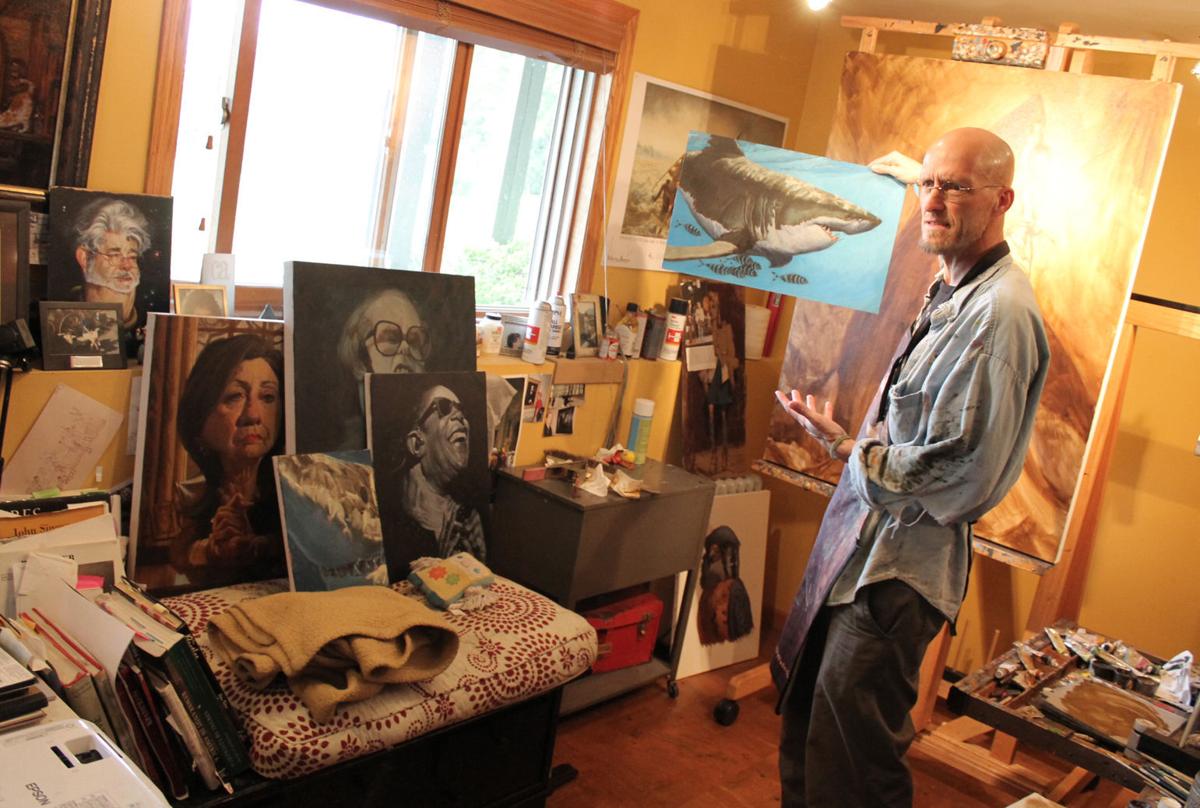 Thomas Fluharty shows a painting of a shark at his Prior Lake studio. 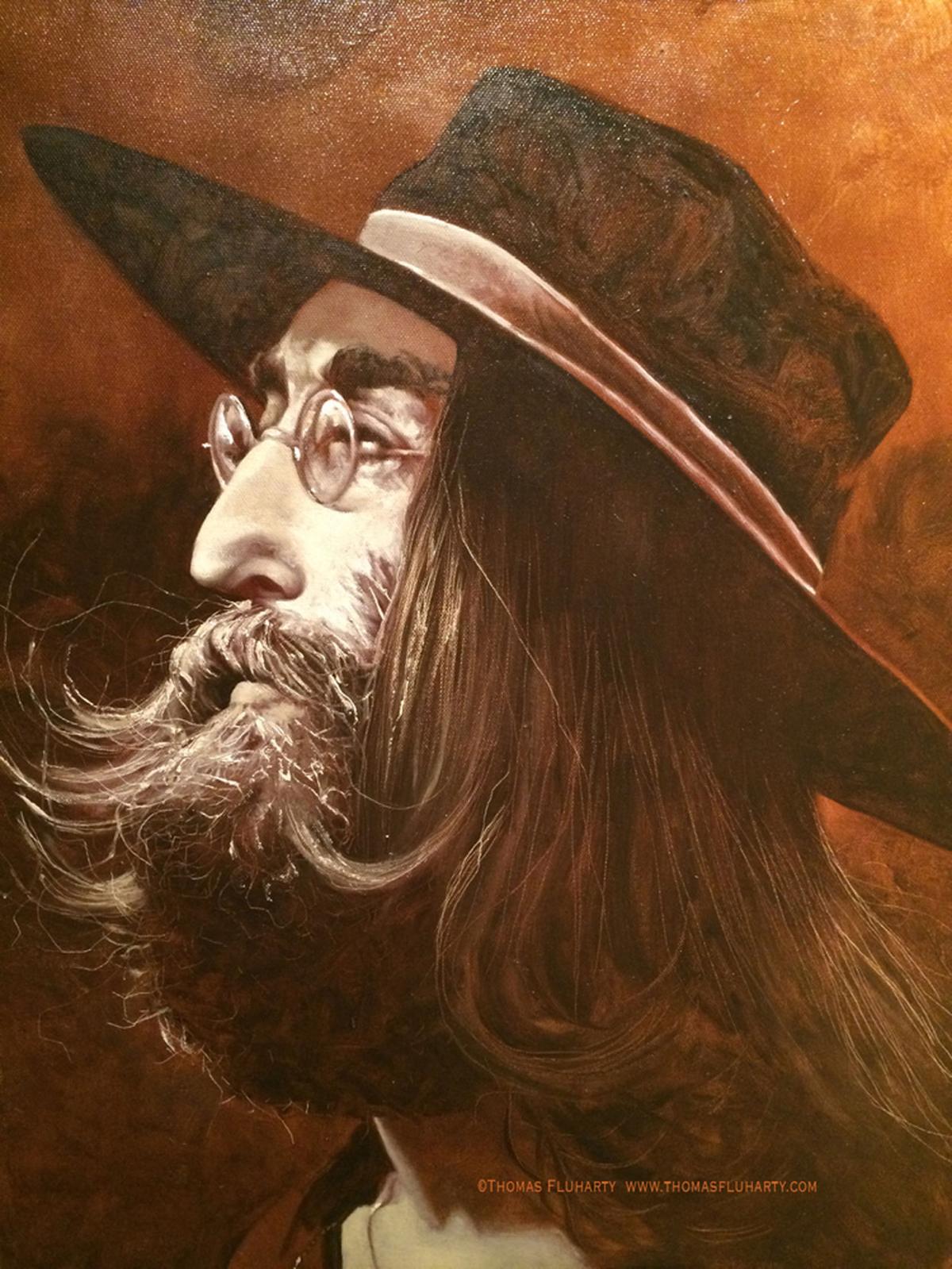 A Thomas Fluharty painting of John Lennon on display on his website.

Thomas Fluharty shows a painting of Hillary Clinton at his studio in Prior Lake.

Thomas Fluharty shows a painting of a shark at his Prior Lake studio.

A Thomas Fluharty painting of John Lennon on display on his website.

Prior Lake resident Thomas Fluharty has been an artist his entire adult life.

It’s worked out pretty well for Fluharty, as his work has appeared on the the covers of magazines such as Time and Mad, and inside publications such as The New York Times and U.S. News & World Report. One of his covers — a portrait of Ken Griffey Jr. and Mark McGuire for Time Magazine in 1998 — hangs in The National Portrait Gallery in Washington, D.C.

One of several local artists who will display their work Saturday, Oct. 10 from 10 a.m. to 4 p.m. at the sixth annual Scott County Art Crawl, Fluharty’s desire to draw began when he was young.

As a kid in Dayton, Ohio, Fluharty always loved to create drawings, often sketching the designs of cereal boxes.

“I would just draw all the time,” Fluharty said. “It’s just what I knew how to do; it came easy. It was just something I kept returning to, nobody had to tell me to do it. [Drawing] for a living wasn’t even something in my mind.”

In high school, Fluharty’s aspiration to create took on a life of its own. An art teacher encouraged him to attend a vocational school in Ohio to finish high school, and he did. From there, he attended the Art Institute of Pittsburgh. Little did he know it would be the beginning of a lengthy and illustrious career.

After graduation from the Art Institute of Pittsburgh, Fluharty was offered a job in New York City with Gem Studios as a storyboard drawer, working with ad agencies in the city to create images for ads. After working in advertising a while, he crossed over to magazines, finding work with Mad Magazine.

“[Ads] really taught me drawing from the ground up,” Fluharty said. “Advertising agencies don’t draw, they think. They have ideas. I would draw the ideas, that they would sell, and then I would see them on TV.”

In his time living in New York he also worked with Ken Bald, a longtime comic artist and friend of Stan Lee (the creator of Spiderman and several other famous comics).

“I really learned a lot about what it means to make images from him,” Fluharty said. He also met his wife, Kristie, and began to create a family which would culminate in five daughters: Lindsey, Lily, Madeline, Millie, and Tasya.

In 1996 the Fluharty family left Manhattan for the Midwest in an effort to be closer to family (Kristie’s family is from Aberdeen, S.D.). They settled in the southern suburbs of Minneapolis due largely to the scenic farmland surroundings, and the ability to still reach a FedEx in order for Fluharty to still be able to express-mail freelance work back to the east coast.

“If I had a painting [due], I would need to ship it to NYC,” Fluharty said. “Now with the Internet you can draw for anyone, anywhere.”

Because of the move, the Fluhartys could now drive to important family functions. The amount of ad agencies within the Twin Cities area was also appealing, given his expertise.

“Minneapolis as a metropolis of culture was a very viable choice,” Fluharty said.

It wasn’t the end of Fluharty’s art career. It was only the next chapter.

It was about 12 years ago that Fluharty really turned his attention to painting. He’d always had the ability, and the interest had always been there, sure. But his storyboard drawing career was a successful one, and raising a family takes time.

“I was doing paintings for ad agencies and magazines, but then I realized I wanted to start painting in oils, and start selling my own work,” Fluharty said.

He studied classical painting throughout the Minneapolis area with artists such as Jeff Hurinenko and Joe Paquet, learning foundational teachings, and going “back to the basics.”

“I didn’t want to learn it on my own, that would be foolish,” Fluharty said of his extensive studying of an art form with which he was already relatively familiar. “You study the greats, and you keep going; that’s when my ability really started changing.”

Fluharty’s passion lies within the strokes of his brush coursing on a blank canvass, being covered in the fresh paint. Also, in John Lennon’s face. Over the years he has created a collection of paintings consisting of pop culture icons such as Paul McCartney, Elton John, Bob Dylan, Prince, Simon and Garfunkel, George Lucas, Hillary Clinton, and many more.

The sixth annual Scott County Art Crawl, sponsored by the Savage Arts Council, will feature five different locations around the Savage area, each filled with different artists displaying their work.

“I was aware of [the Scott County Art Crawl] the last few years, and I felt like this was the year to do it,” Fluharty said. His work will be displayed in the Savage City Hall Community Room. “It was a logical time to do it because I finally have a body of work to have available for sale. I think it’s going to be a great group of artists getting together. The skill level looks beautiful, and I think it will be a great time.”

Currently Fluharty sells his work online on his website at www.thomasfluharty.com. As if he weren’t busy enough, Fluharty also teaches for Schoolism, an online art education program.

“I do this because I don’t want to get a real job,” Fluharty said with a laugh. “What moves me is the love to create. My goals are to love my wife, family and God, be faithful with what is in front of me, and create a volume of work that can provide for my family.”

WHERE: Various locations throughout Savage