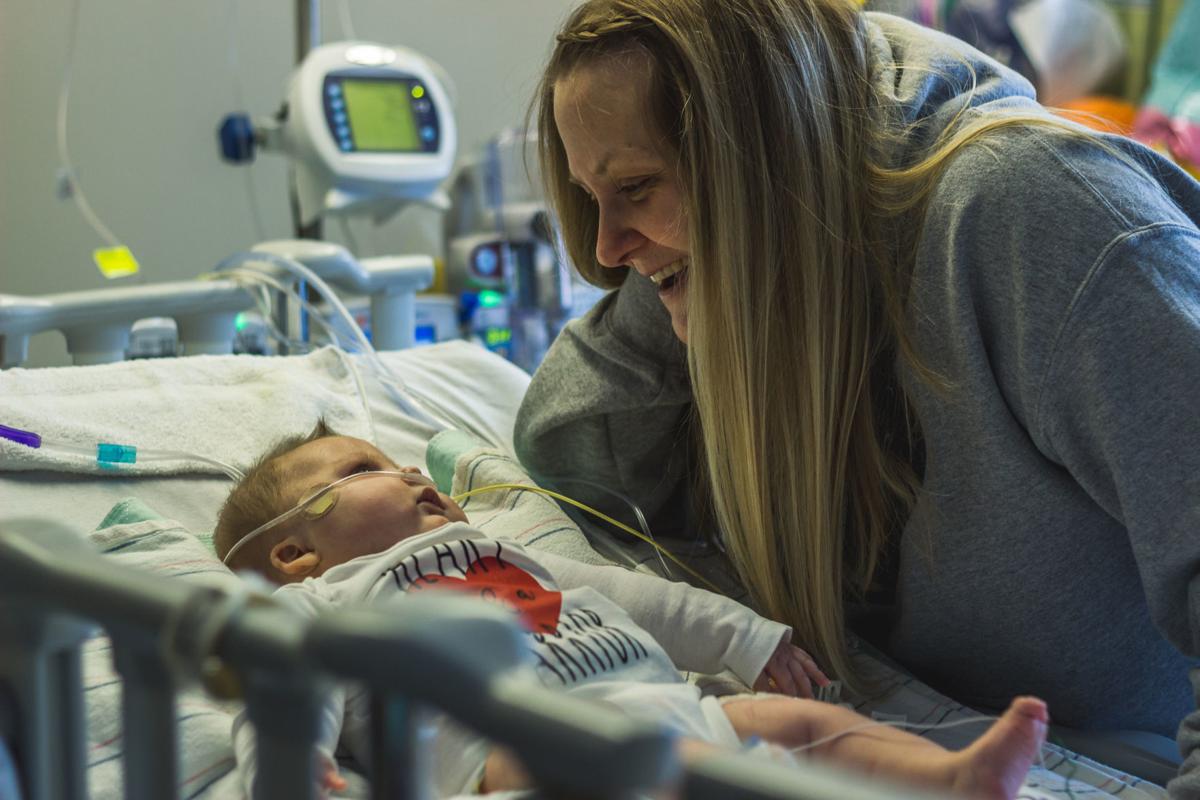 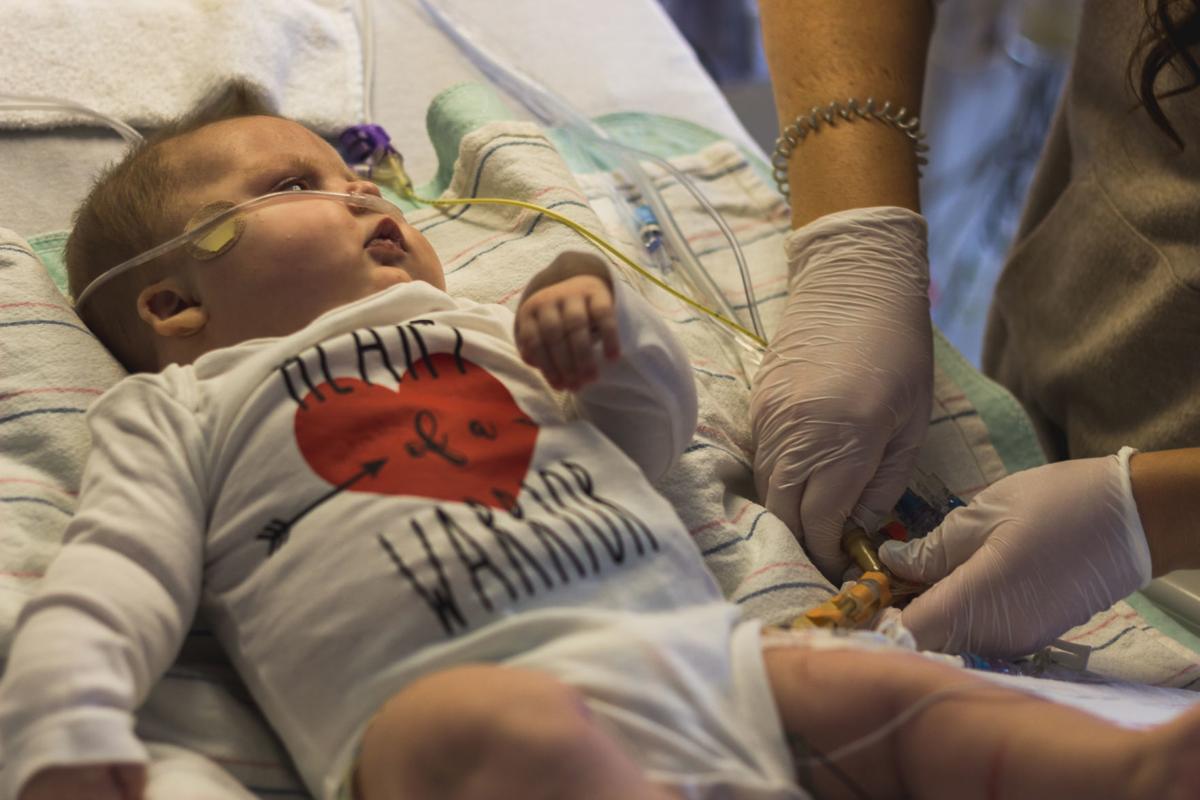 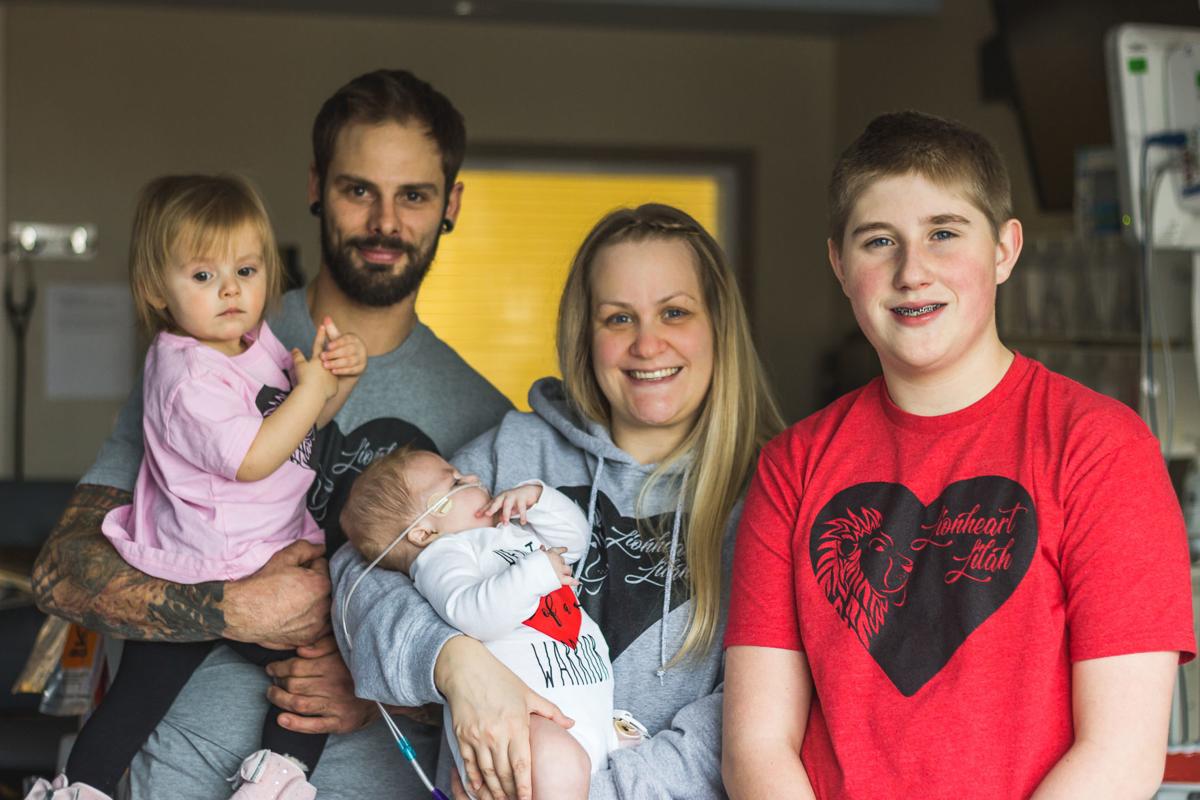 Shakopee couple Sara Mather and Jake Robinson might have more to be thankful for this year than the average family: Their 4-month-old daughter Lilah is on the road to recovery after two open heart surgeries.

Lilah was born in July with a heart defect called Tetralogy of Fallot with absent pulmonary valve.

“It causes the pulmonary arteries to be massively dilated, which compresses the airways,” Mather explained. Within two days of birth, doctors discovered Lilah also has an interrupted aortic arch, which prevents oxygenated blood from reaching the whole body.

“She had her first open heart surgery at six days old,” Mather said. “I can’t even really explain the feeling when you’re watching them wheel away your newborn tiny baby.”

Mather and her fiance Robinson were especially nervous because some babies come out of surgery and have to be on life support if they don’t handle the surgery well. “Lilah the Lionheart,” as her family affectionately calls her, handled the surgery like a champ.

“She didn’t need any assistance when she came out. She did phenomenally,” Mather said.

As Lilah recovered in the hospital, she encountered another set of problems. She was struggling to breathe due to her pulmonary artery compressing her lung, and doctors wanted the couple to consider a tracheotomy.

Instead, Mather and Robinson opted for another open heart surgery.

“Not that we weren’t OK with her having a trach, but right now there is a huge shortage of home nursing, and you have to have someone awake 24/7 when your baby has a trach,” Mather explained. “So we went through with the second surgery.”

Lilah had this second surgery at just two months old. She spent one month and three days intubated after the surgery, during which Mather and Robinson couldn’t even hold her.

“For the last (couple weeks) I’ve been eating it up and snuggling her,” Mather said. “The second surgery was a huge success.”

After the intubation period, Lilah was finally able to meet her big sister, 17-month-old Elena Robinson, who was too young to visit Lilah in the ICU.

“They finally met for the very first time. It was so bittersweet,” Mather said. “Elena was shrieking she was so excited.”

Lilah’s 14-year-old brother, Isaak Mather, got to meet Lilah when she was first born.

Though Lilah is still hospitalized and has yet to make her first trip home, Mather and Robinson hope that day is coming soon. Doctors want her to grow and develop at home for a couple months before performing another surgery to place a shunt in her one underdeveloped pulmonary artery.

Lilah isn’t the only one blazing through a rough four months. Mather said she and her fiance are sometimes surprised by how much they’ve been able to handle.

With two other children at home, Lilah isn’t the only one who needs care and attention. Fortunately, Mather hasn’t had to return to work yet, so she spends as much time during the day as she can with Lilah so she can see Isaak and Elena in the evenings.

“I kind of amaze myself every day that I’m actually doing this. A lot of it is that I get to be here (at the hospital), thank God, and I get to be her advocate,” Mather said. “We still are just so anxious to have her home.”

Mather said she has come a long way since first learning of Lilah’s condition at her 20-week ultrasound.

“We were devastated,” she said. “I think I cried for about three days straight. We wouldn’t be able to get through any of this without our family.”

“I just have a feeling we’ll get out of here and eventually it will be OK,” she said. “This is one of the times in our life we’ll look back on and be like, ‘Remember that?’”

Family and friends of Sara Mather and Jake Robinson are planning a benefit for their daughter Lilah on March 9 at the Shakopee VFW, 1201 Third Ave. E.

They also have a GoFundMe page at www.gofundme.com/lilah039s-tof-story to help with medical bills and Mather’s time off work.