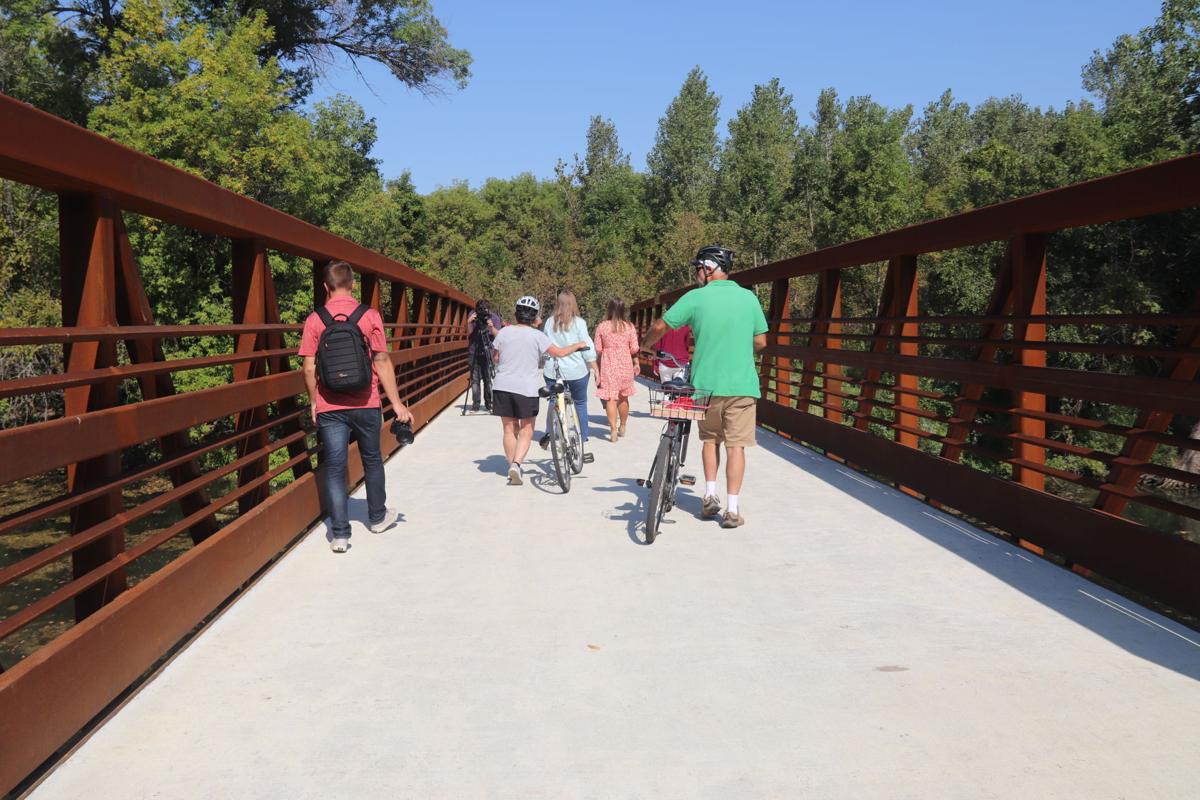 Trail goers have the opportunity to cross the bridge after the ribbon cutting. 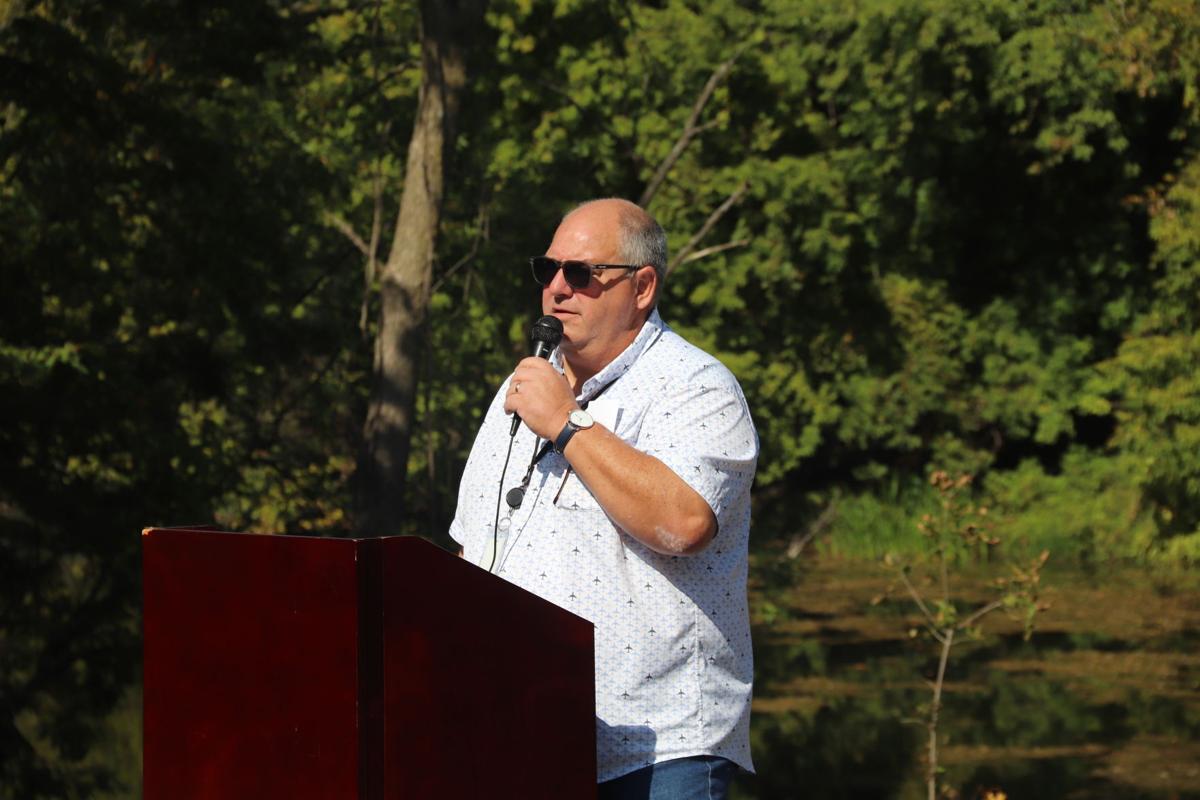 Mayor Bill Mars speaks in front of the bridge before the ribbon cutting. 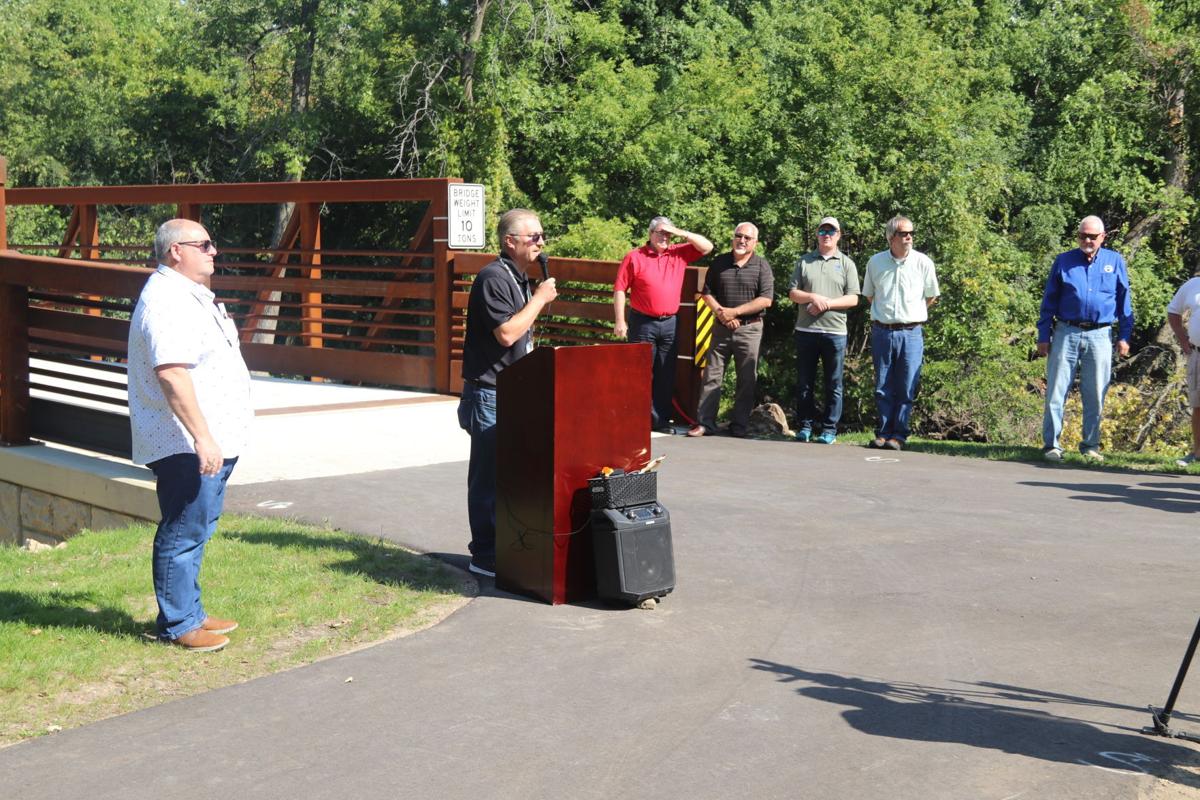 Andy Vig, representing the SMSC, speaks to the Indigenous cultural significance of the land near the bridge. 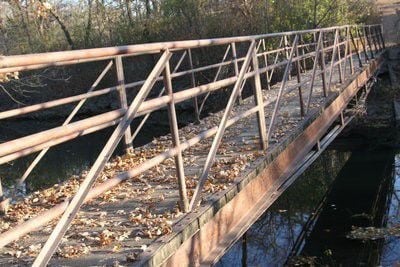 The former Memorial Park Bridge was built around 1981 and torn down in 2016.

Trail goers have the opportunity to cross the bridge after the ribbon cutting.

Mayor Bill Mars speaks in front of the bridge before the ribbon cutting.

The Memorial Park Bridge opened to the public last Friday after years of work centered on addressing structural concerns and potential damages to native land.The five-year project was funded by the city of Shakopee, Shakopee Mdewakanton Sioux Community, Minnesota Department of Natural Resources and Scott County. Members from each organization attended a ribbon-cutting ceremony to celebrate the bridge’s completion.

Connecting to the Minnesota Valley State Trail, the new bridge, at 1801 County Road 101, replaces the original built around 1981 and torn down in 2016 due to structural and safety concerns. These concerns included issues with damaged trusses that had lost their structured shape over the years from compounded stress.

Soon after removing the original bridge, a planning process was started for a replacement. Shakopee City Administrator Bill Reynolds said he realized the city had many factors to consider when working on this project.

“There were some setbacks in several different ways — part of it was funding, and part of it was figuring out where the bridge goes,” Reynolds said. “But, we were constantly working toward the objective of getting the bridge back.”

Acknowledging the cultural significance of the land was a primary factor the city kept in mind throughout the planning and constructing processes.

The city hired a historic preservation and archaeological consulting agency to perform multiple archaeological investigations on the land to ensure native historic and cultural artifacts would not be damaged or disturbed by the bridge’s construction.

The archaeological work revealed multiple discoveries about the land’s history. Investigative results found hundreds of mounds built throughout the area, according to Reynolds. Furthermore, nearly half of the 100 “shovel tests” performed on the land tested positive for cultural artifacts. These included findings of lithic and ceramic artifacts dating back to the pre-contact era, animal bone fragments and a possible human bone fragment.

Reynolds said the archaeological investigation results presented to the city council in June 2020 helped shape decisions about where the bridge should be located to avoid sensitive areas. Additionally, the bridge was built atop concrete pylons for the purpose of minimizing damage to the land by not digging deep into the soil.

The Shakopee Mdewakanton Sioux Community provided a $100,000 grant in 2019 to assist the $875,000 project and ensure native land would be respected in the construction process. Reynolds said this long-term partnership with the community will continue on in future plans, including a multiyear cultural trail project.

“We have an incredible relationship with the Mdewakanton Sioux Community. That is essentially sacred ground for them, and we fully recognize that,” Reynolds said.

Open to the public

After years of anticipation, the new bridge looks to positively impact trail usage year-round for general pedestrians, runners, bikers and snowmobilers. Completing the bridge project is something Reynolds believes displays Shakopee’s appreciation for quality parks and preserving land to benefit the entire community.

“We’re very proud of the fact that we have great parks and especially have a great trail system throughout the city,” Reynolds said.