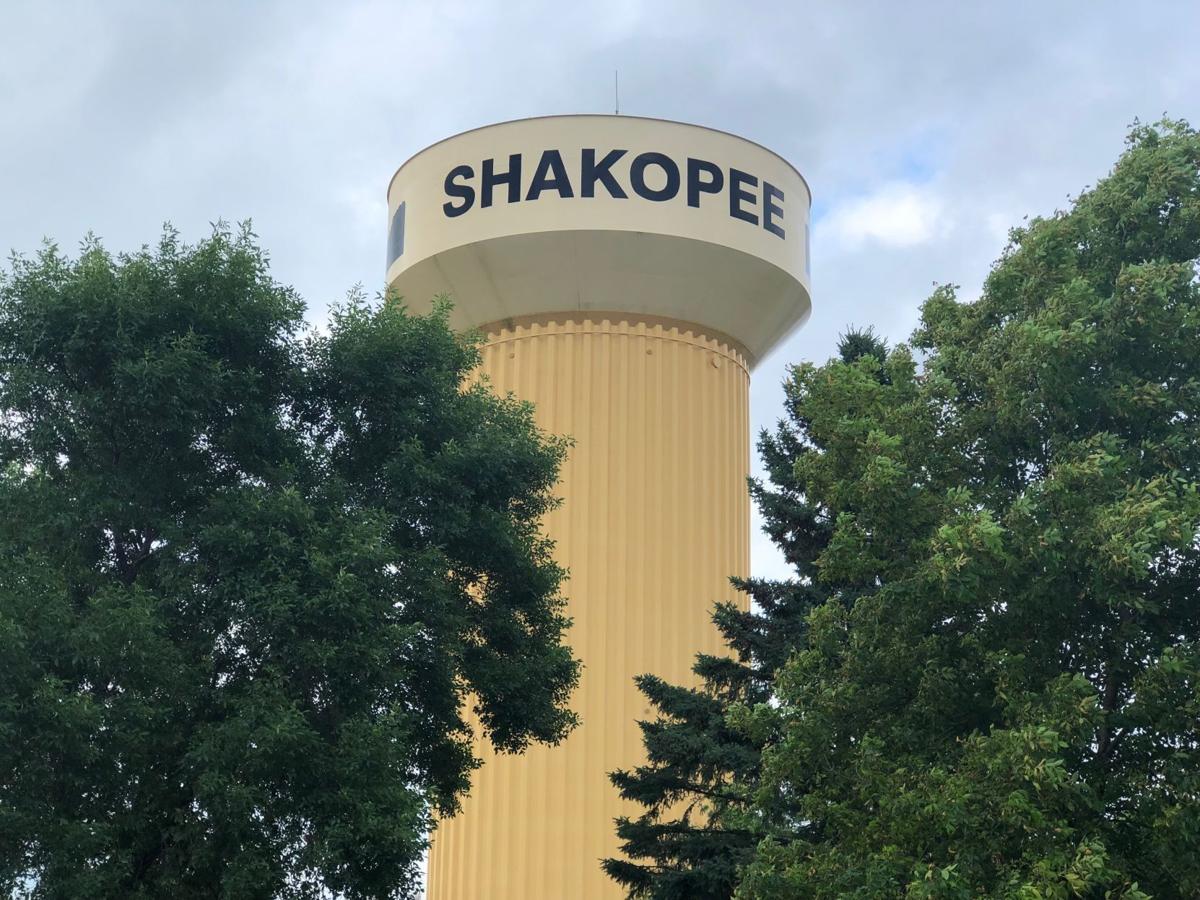 According to an investigation surrounding former Shakopee Public Utilities Manager John Crooks, the utilities commission has violated several statutes over the years. 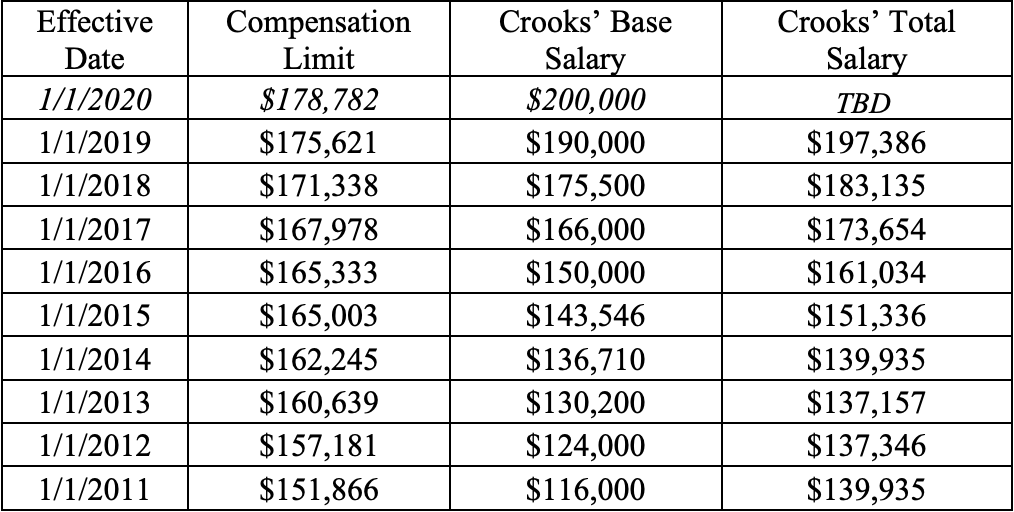 Former Utilities Manager John Crooks’ compensation has exceeded the state limit since 2017, according to this graph included in an investigative report.

Since former Shakopee Public Utilities Manager John Crooks was promoted to manager in 2011, he was “laser-focused on compensation, specifically his own,” according to an investigative report made public this month.

According to the report, conducted by law firm Levander, Gillen and Miller, before asking the commission for a raise, Crooks would “offer an apology at the beginning of most of the discussions, stating how he hates bringing up his salary every year, but he was passionately concerned about his wage range and how it must continue moving or he would be ‘topped out.’”

The report details years’ worth of questions from SPU commissioners and former Finance Director Renee Schmid surrounding Crooks’ salary, which has exceeded the state’s limit on government employee earnings by nearly $40,000 since 2017 but was only recently discovered to have exceeded the cap.

Crooks, who recently separated from the utility, will be required to repay the excess earnings he has received since 2017, according to a measure approved by the commission Aug. 13.

In 2017, Schmid told Crooks that, according to her calculations, he was over the salary cap, to which Crooks replied he would start a waiver process. Waivers provide salary cap exceptions “if it is determined that the position requires special expertise necessitating a higher salary,” the report said.

Schmid and Crooks told investigators an attorney they consulted advised against applying for the waiver because he did not believe it would be approved and a waiver was never submitted.

Schmid, who retired earlier this year, questioned Crooks’ salary again in 2019 and 2020 after his contracts were approved, each time mentioning the salary cap, according to email exchanges between Crooks and Schmid that were included in the report.

Crooks got around the salary cap by subtracting the value of his vacation and sick leave accruals from his overall salary, which — by his calculations — put his salary just below the cap, the investigation found. In closed meetings, commissioners asked questions regarding the salary cap, but ultimately relied on Crooks’ calculations, the report stated.

According to the report, “the commission seemed to feel that something was not quite right with his salary, but could not identify the issue.”

In an interview with the Valley News, SPUC President Deb Amundson said she wishes she would have been “more curious” about Crooks’ salary before voting to approve his contracts and accepted partial responsibility for the violation.

“On the other hand, it should have been on (Crooks) to inform us, too, where he stood on this,” Amundson said. “He believed… the statute allowed him to calculate his salary in a way that made him in the bounds, but I think the commission should have asked more questions.”

The investigation also found that Crooks, Schmid and Amundson all had inadequate knowledge regarding the Data Practices Act and open meeting laws. At an Aug. 13 SPUC meeting, the commission voted to require all staff members and commissioners to attend training regarding the data practices act.

In addition, from 2018 to 2020, eight meetings contained illegal “commission-only” packets with additional material not available in packets for the general public.

Amundson told investigators she was not aware of the “commission-only” packets and did not know they were sometimes different from the packets the public could access.

Crooks’ last day was Sept. 8 after the commission unanimously approved a separation agreement and decided to pursue interim management with the Minnesota Municipal Utilities Association. 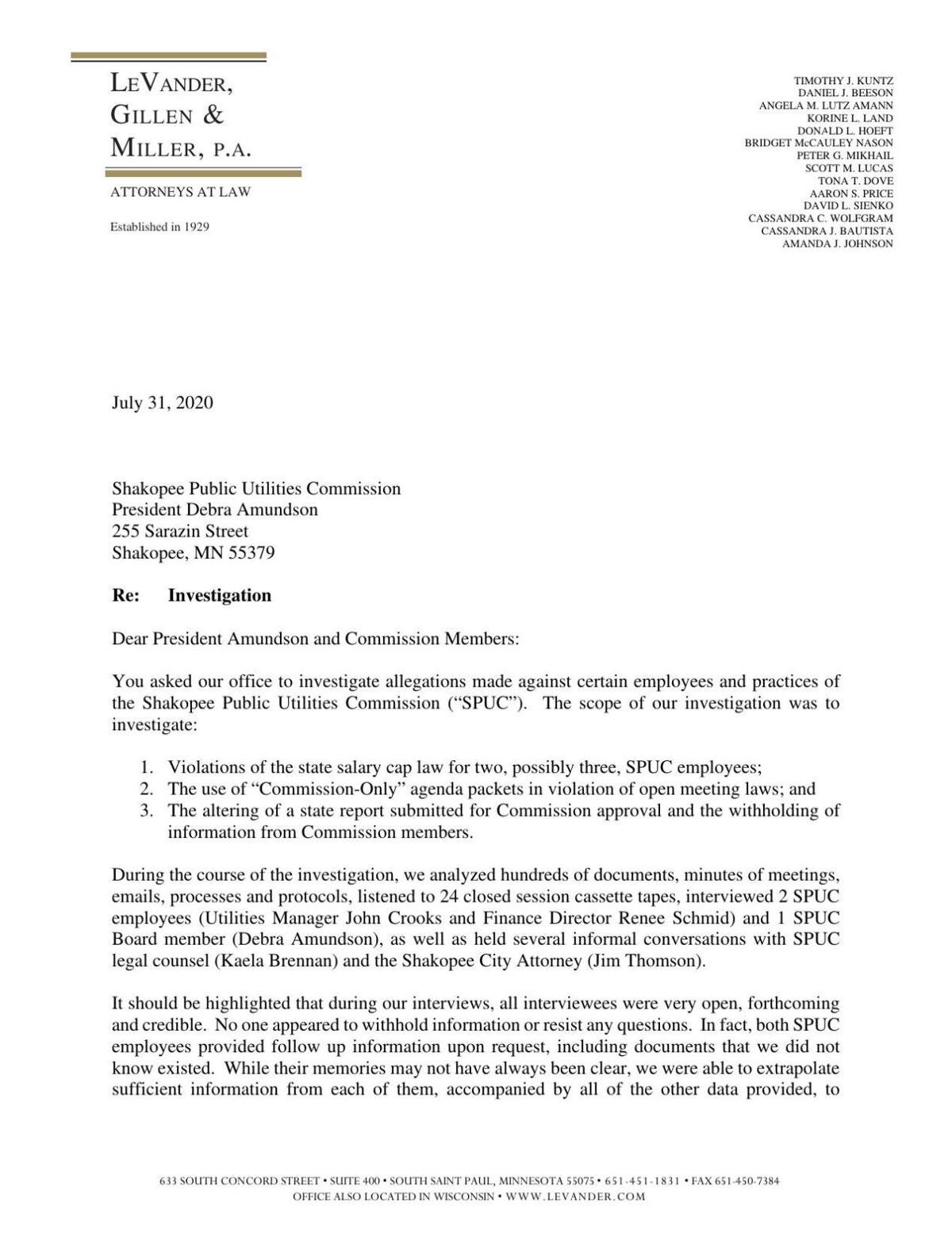 Shakopee residents will have the option to dissolve the Shakopee Public Utilities Commission on Election Day in November. The Shakopee City Council approved the ballot addition in August with little discussion.

If local residents vote to abolish Shakopee Public Utilities, the city plans to manage its own water utility and sign a two-year contract with an outside operator to manage its electric utility, according to a recently-approved Request for Qualifications that was discussed at the Sept. 1 Shakopee City Council meeting.

After the two-year contract is up, the council would have the option to sign an agreement with the provider, who could then take control of the electric utility’s assets and responsibilities.

Councilmember Matt Lehman, who voted against the RFQ, said at the Sept. 1 council meeting “it’s misleading to say there’s going to be no employee loss when, if the utility is sold off, there’s no control over whether those employees stay or not.”

City Administrator Bill Reynolds said in two years the city council will know enough about the operation to decide whether to sell the electric utility or keep it within the city, stating the city of Chaska runs its own electric utility as part of a city department and “it’s not rocket science.”

“We can certainly do that here,” Reynolds said. “What we’re basically saying is that in a two-year time frame we’re going to get an idea as to what state the utility is in.”