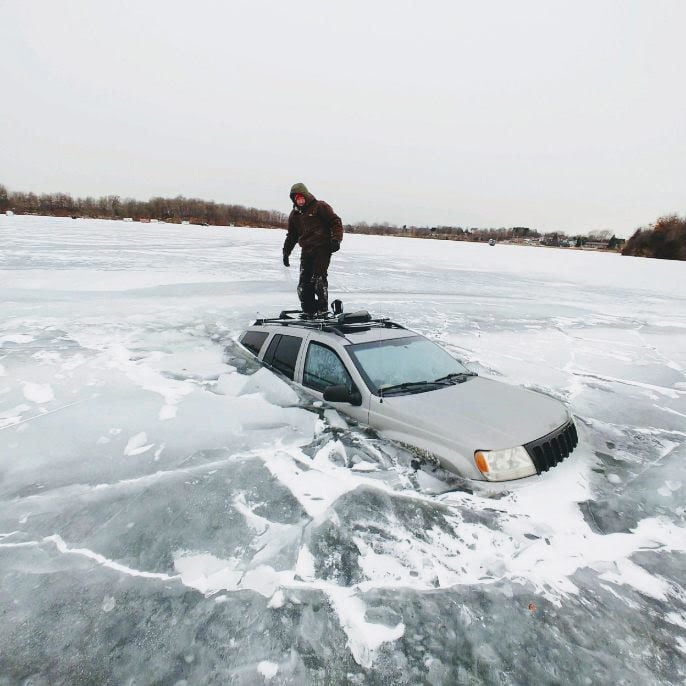 Chet Johnson of Austin makes the best of an icey, dicey situation after his Jeep went into O’Dowd Lake in Shakopee. 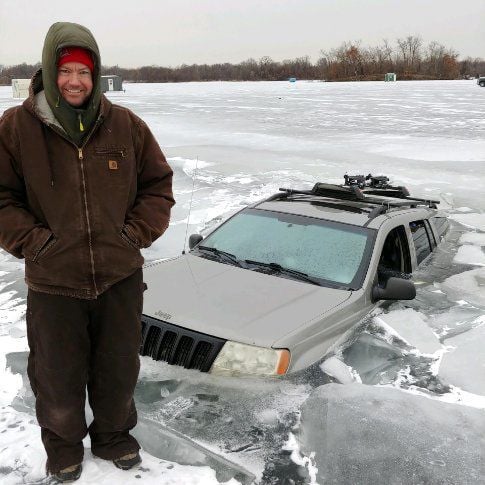 Chet Johnson of Austin in front of the Jeep that went into O’Dowd Lake as he was trying to take a short-cut across to his stepmother’s house. 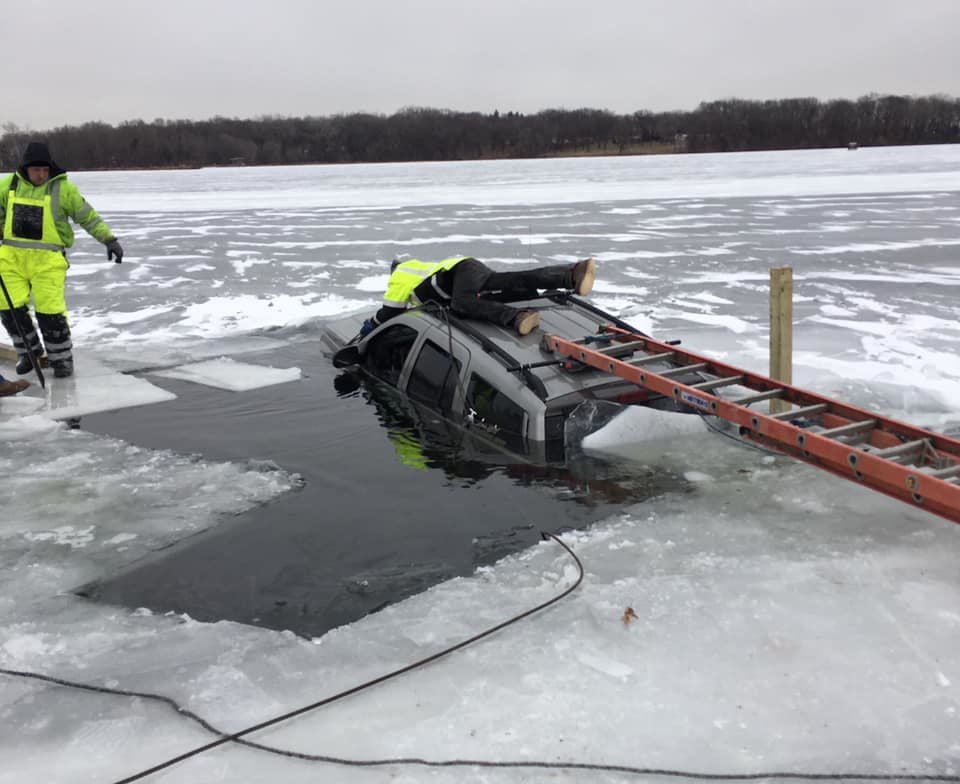 A rescuer climbs out onto the Jeep roof while trying to retrieve it. 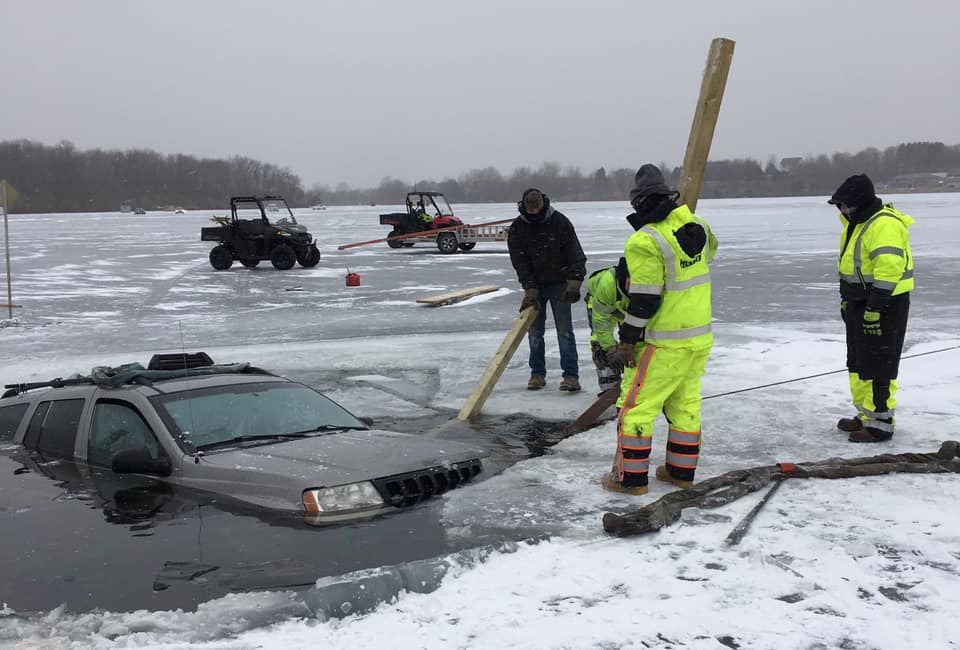 Rescuers work to free the Jeep from the lake. 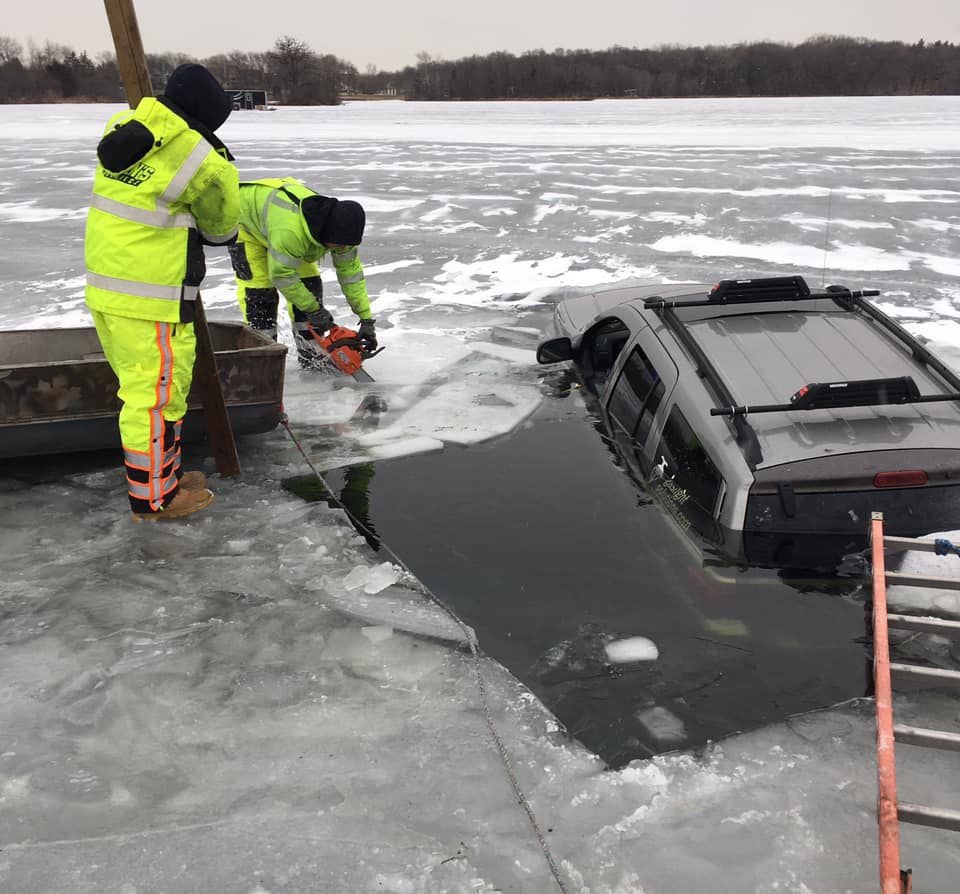 Despite the frigid temps, the ice isn’t as solid as you might think. 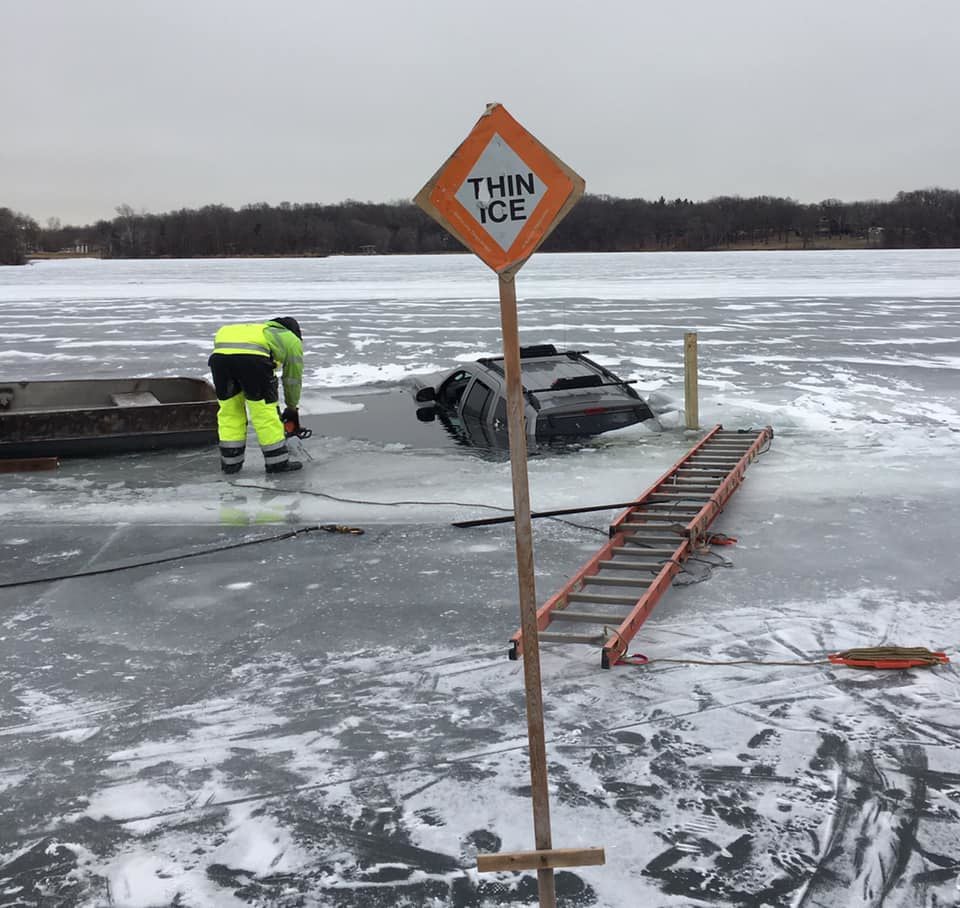 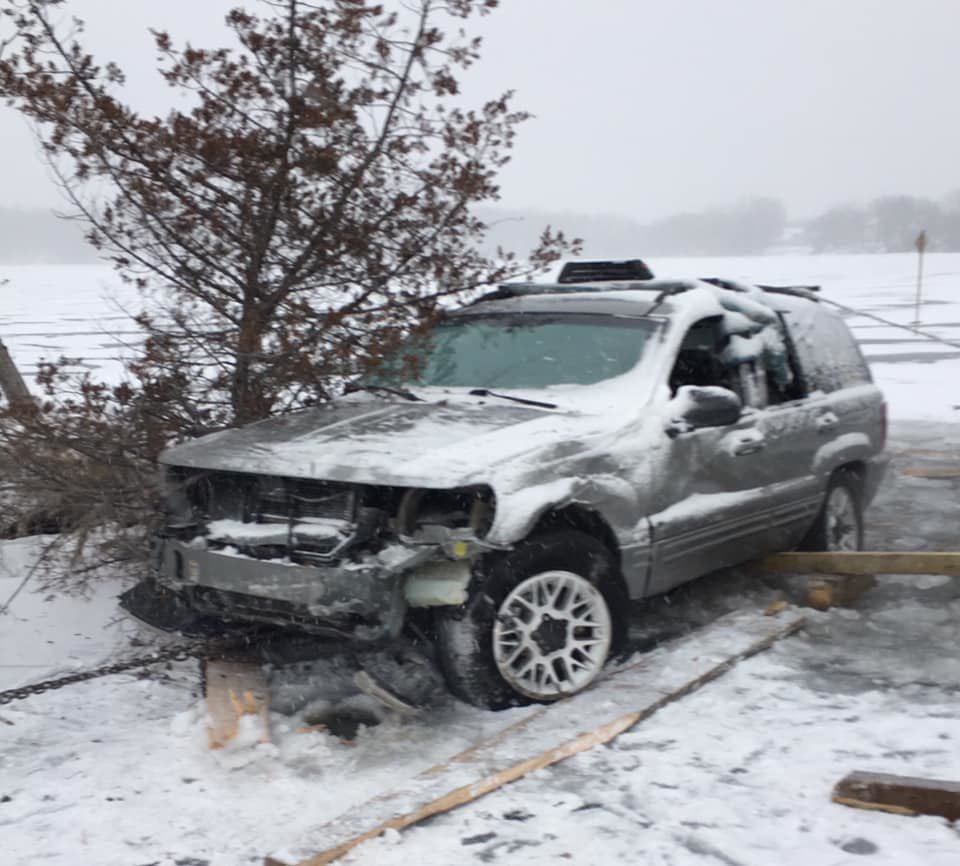 “After” Chet Johnson attempted to drive across the lake Thursday.

Chet Johnson of Austin makes the best of an icey, dicey situation after his Jeep went into O’Dowd Lake in Shakopee.

Chet Johnson of Austin in front of the Jeep that went into O’Dowd Lake as he was trying to take a short-cut across to his stepmother’s house.

A rescuer climbs out onto the Jeep roof while trying to retrieve it.

Rescuers work to free the Jeep from the lake.

Despite the frigid temps, the ice isn’t as solid as you might think.

“After” Chet Johnson attempted to drive across the lake Thursday.

The metro area may be hitting sub-zero temps for the first time this winter, but you still may be on thin ice if you venture onto lakes in a vehicle.

So Chet Johnson of Austin learned when he took a short cut to his stepmother's house across O'Dowd Lake near Swing Island on Thursday around 5:49 p.m.

Johnson had been working in Burnsville that day, and then after playing disc golf in Shakopee, near Hy-Vee, he headed out to see his stepmother.

“I had the best round of my life and I was feeling very optimistic,” he said. He’d also started reading a the book “12 Rules for Life” and it “changed my paradigm.” The book, aimed at young men, offers tips on healthy living and staying organized.

“It wasn’t anything about safe ice,” he cracked.

He decided to take a short cut because, well, Minnesotans.

“It was a fun short cut,” he said. “It’s a shorter distance and it’s more of an adventure.”

He headed toward the lake, where he estimates 200 to 300 vehicles were parked. But he was crossing the side that doesn’t get as much traffic, because the fish don’t bite as well.

He and a buddy had been talking about going ice fishing, and people told him the ice was about 16 inches thick, which he said is “really safe.” He said eight inches is usually thick enough for cars; 10 inches for trucks.

“I’ve gone through this inlet hundreds of times,” he said.

He “got hooked into making contact with a guy who has an ice house” on that side, and approached the lake, drove parallel to it, shined his headlights on it to check it out. It looked good to him, although there was a narrow spot, about four or five feet, that looked thinner.

“I decided that it looked good enough,” he said. “I didn’t look at it carefully.”

He grew up right off the lake, and knew inlets had thinner ice.

“I did have a slight feeling that it… those are always the most dangerous areas,” he said. “It had been a few years since I’d even been on the ice in that area.”

“There was a lot of ice noise,” he said.

The Jeep’s back end hit the bottom and “almost popped back out,” according to witnesses about 60 to 80 yards away. He instinctively put the pedal to the metal, but the muffler was underwater so he couldn’t tell. Water started pouring in the back of the Jeep.

“I couldn’t see, there was too much water (splashing) on my windshield,” he said.

His left window had been open before he went in, so he climbed out of it and stood on the window sill, trying to decide which way to jump. A guy nearby pointed out a spot near the fender, where he needed to clear about four feet of open water.

Oddly enough, he was worried about denting his hood so he tried to avoid walk across it, but dropped into a push-up position on his fender and jumped to safety.

He was never all that worried, being an athlete who had ice training — practicing falling through ice and climbing out — in an Outward Bound survival class. He’s driven four-runners over four or five feet of thin ice to get to the shoreline. He used to water skip on snowmobiles. And he knew there were a few guys nearby.

“I was concerned about getting wet,” he said. “You can use dry ice as a handle to pull your way out.”

Plus, the water wasn’t that deep. The front end was in about 2.5 to 3 feet of water.

But by morning, the Jeep was filled completely with water.

He went to a nearby ice fishing house to stay warm while waiting for deputies to arrive. His stepmother picked him up later at a boat landing, and they “had a nice dinner” of homemade pea soup.

In retrospect, he said he should’ve talked to some of the ice fishers about going through the inlets, since they’d been driving through the other inlets.

His biggest concern was retrieving his organizer from a gym bag in the Jeep, because it had “a year’s worth of work” worth about $40,000 planned out. Once the Jeep was pulled out of the lake by a towing company, he got it. The Jeep, however, was destroyed.

“We are grateful that driver was not injured in this incident," Scott County Sheriff Luke Hennen said. “I urge everyone to be cautious while enjoying our lakes as ice should never be considered completely safe.”