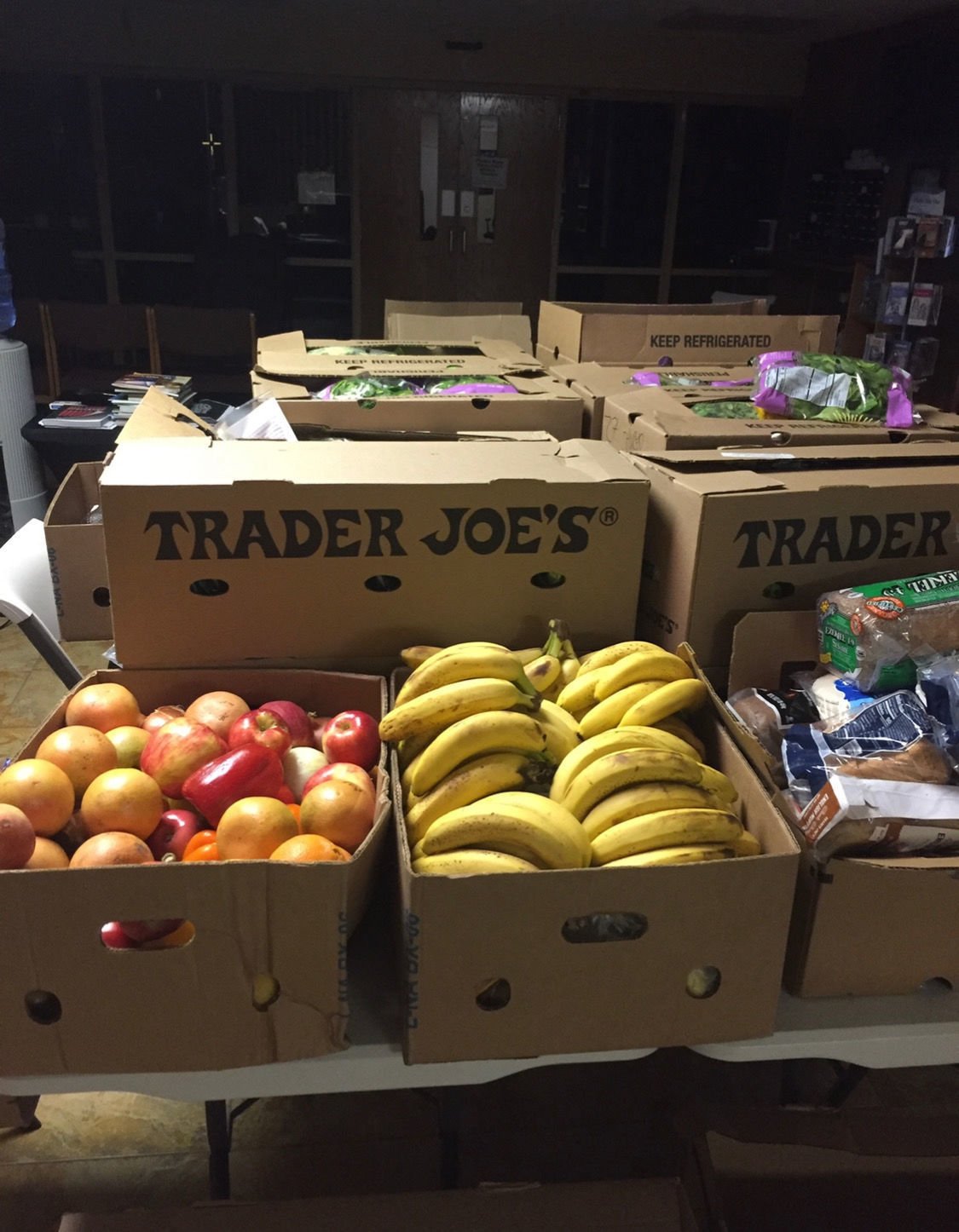 Trader Joe’s donated fresh produce to Esperanza, which is distributing groceries to families in need every Saturday amid the COVID-19 pandemic. 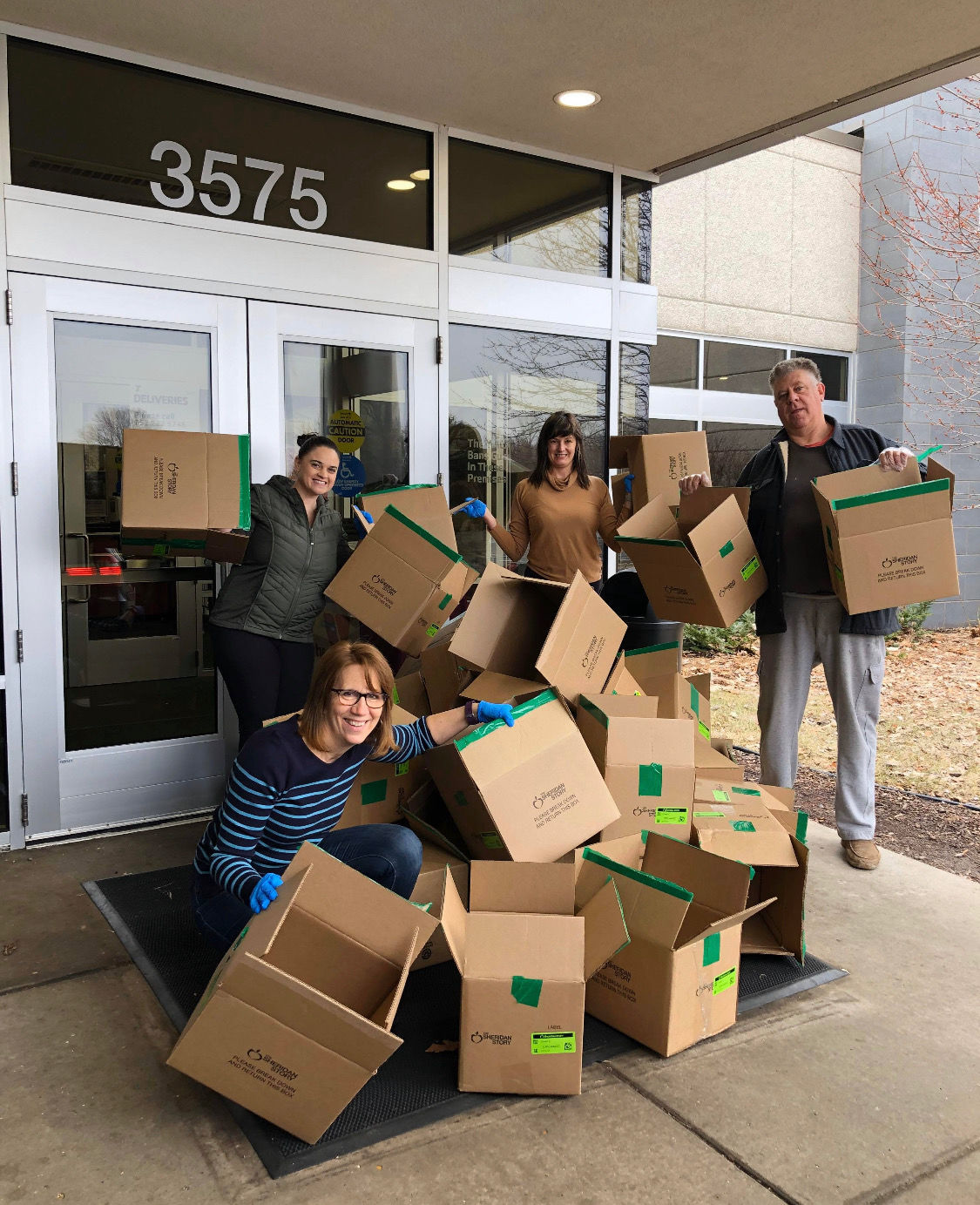 Volunteers stand outside New Creation Lutheran Church in Shakopee on April 4 after distributing groceries to thousands of people. 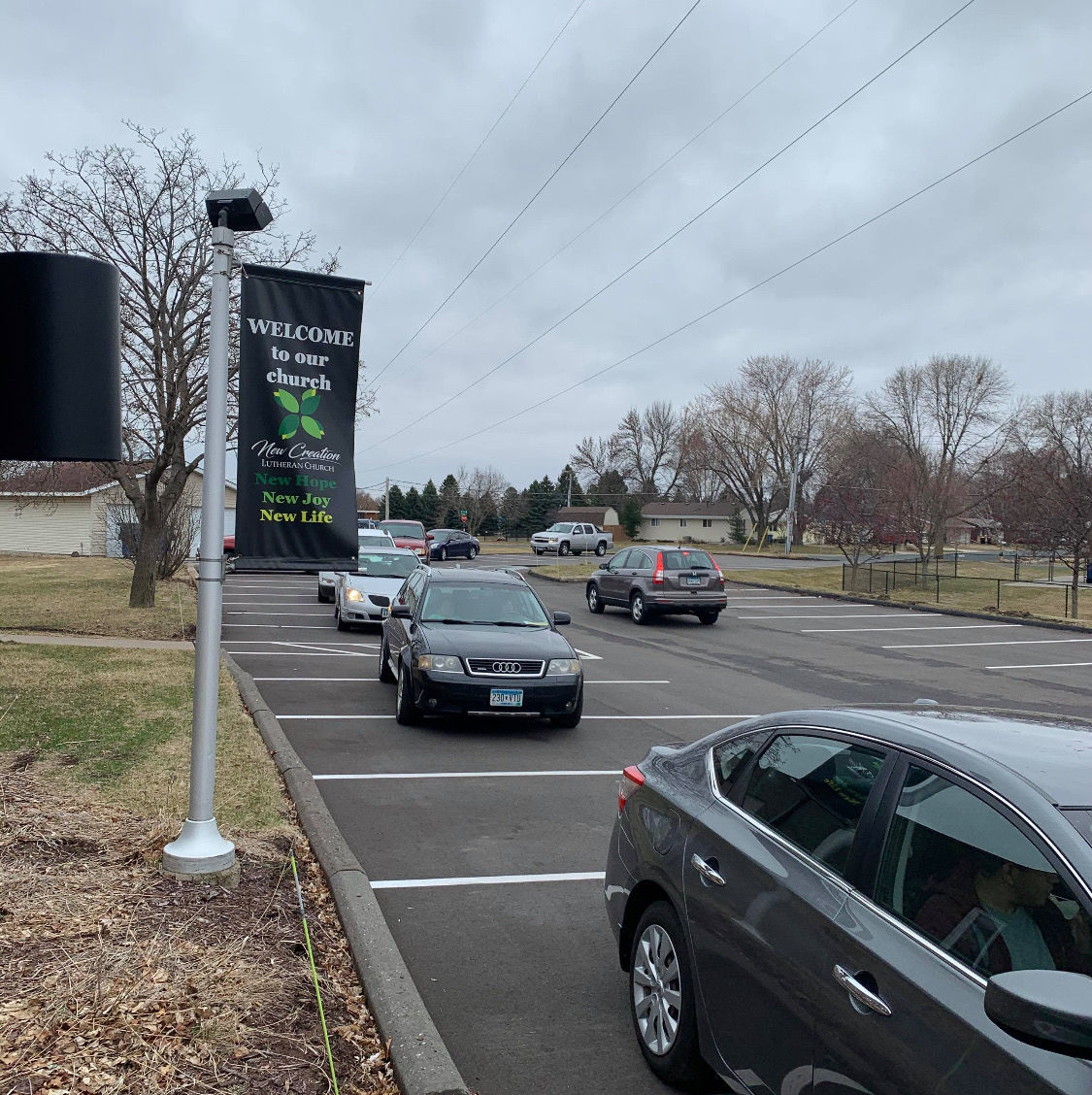 Hundreds of families lined up on Saturday, April 4 to receive free groceries in Shakopee. Most of them, Scott County Public Health Director Lisa Brodsky said, are out of work right now. A local group called Esperanza is hosting the food drive every Saturday starting at 11 a.m. for any family who needs it, no questions asked.

Trader Joe’s donated fresh produce to Esperanza, which is distributing groceries to families in need every Saturday amid the COVID-19 pandemic.

Volunteers stand outside New Creation Lutheran Church in Shakopee on April 4 after distributing groceries to thousands of people.

Hundreds of families lined up on Saturday, April 4 to receive free groceries in Shakopee. Most of them, Scott County Public Health Director Lisa Brodsky said, are out of work right now. A local group called Esperanza is hosting the food drive every Saturday starting at 11 a.m. for any family who needs it, no questions asked.

Theresa Garcia is a single mother from Puebla, Mexico who spoke across a crackling phone in broken English, wondering aloud when she’d finally be able to report back to work as a housekeeper at a local hotel.

Garcia is undocumented, and her name has been changed for fear of being identified. She has been out of a job for a month, with the rent bill coming up soon. With a 17-year-old son to feed and a sister in Jordan, also a single mother, who has three little girls to feed, Garcia is scared.

Even before COVID-19 snatched up her cleaning shifts at the hotel, Garcia was barely able to make ends meet. With an $825 check she received every two weeks, she had to find a way to pay her $600 rent bill, plus food, car insurance and a cell phone plan.

Now, those expenses still demand her money, but she doesn’t have a paycheck to fall back on.

Garcia, who has lived in Shakopee for 21 years, cannot qualify for the unemployment benefits or the stimulus checks others in her position will receive for being furloughed or laid off. Ana Vergara, the president of Shakopee Diversity Alliance, is advocating to raise money for others in the community like Garcia, who cannot receive government assistance but still need the help.

A local group called Esperanza, which means “hope” in Spanish, has made a point to cover at least the food portion of the bill for any family who needs it. While many Latinos in Scott County benefit from the organization, it doesn’t exclude anyone. Esperanza partnered with Shakopee’s COVID-19 help group and the Shakopee Diversity Alliance to distribute food on Saturdays for families who are trying to stay afloat during this time.

On April 4, 235 families received groceries. Of those families, 75 were Latino, 10 were Somali and 150 were white. When Scott County Public Health Director Lisa Brodsky drove to New Creation Lutheran Church that morning to drop off gloves and masks for the volunteers just before 10 a.m. on that morning, she said there was already a long line of cars waiting to pick up groceries. The drive didn’t start until 11.

“Food is a basic resource, and people are scared,” Brodsky said.

Other local groups and companies, such as the Scott, Carver and Dakota County Community Action Partnership, Heart Ministries, New Creation Lutheran Church and several other local agencies have donated money, volunteers or space for the cause.

On March 28, the first day of the food distribution, Esperanza expected about 50 families to drive through to receive food. Within the first 36 minutes, 50 families had already driven by, because all 50 half-gallons of milk had already been distributed, Mary Hernandez, the director of Esperanza, said.

The impact of COVID-19 has caused millions of people like Garcia to lose work.

“It’s scary because you don’t have money for insurance or the doctor,” Garcia, whose son has health insurance but who isn’t covered herself, said.

If she’s out of work much longer, she doesn’t know how she’ll cover the cost of car insurance and rent, let alone a doctor’s visit. Her savings, she said, will only cover one more month of expenses.

“I don’t know how I can help my sister,” Garcia said. “She has three children, and she needs to pay the rent, she needs to pay for the car. And three kids is very hard. I know a lot of families have the same problem.”

In the last two weeks, families like Garcia’s received essentials such as milk, bread, meat, spaghetti, cereal and toilet paper to last her and her teenage son the next seven days. Hernandez said normally Esperanza holds food drives once every two months. Now that the organization is distributing food each week — and with far more people needing assistance than anticipated — she’s concerned about having enough to give.

Cub Foods and Trader Joe’s have donated most of the food, which helps. Last week Esperanza fed 1,175 individuals for the week and only spent $1,500 of its own funds. But that’s still more money than it’s used to spending each week, and the need is going to continue growing, Hernandez said.

Shakopee City Council Member Angelica Contreras, who also serves on the board of the Shakopee Diversity Alliance, said the goal of the food distribution is to allow people to save money on groceries so they can pay their bills.

“We encourage them to reach out to their landlords and their banks,” Contreras said. “And a lot of them say they don’t need to worry about payments until June or July. But the thing is, when June or July comes around, how are they going to pay that lump sum that they owe?”

Any family in need can drive up in their car, open their trunk, and receive groceries on Saturdays through Esperanza. The CAP Agency is offering drive-up food distribution by appointment, and Hosanna Church in Shakopee is hosting community meals from 5:30 to 8:30 p.m. on Tuesdays. There are seven other food distribution sites across Scott County for families in need during this time.

Hernandez said Esperanza is not only helping families fill their stomachs. The organization also wants to make sure families in the community are eating healthy foods.

“The funds make sure kids get nutritious, healthy food,” Hernandez said. “The community has been amazing and donates as much as they can.”

Hernandez said they are accepting donations from anyone who is able to give food from their pantry or money so it can continue feeding families who need help covering their bills.

The layers of difficulty associated with COVID-19 run deep, especially among minority groups and with families who don’t speak English as a first language. The Latino community makes up about 8% of Shakopee’s population, many of whom are feeling the effects of the pandemic differently than the general population.

Many Latinos work in hotels and restaurants, Vergara said. A high percentage of those people don’t have insurance or might not qualify for unemployment benefits if they are undocumented.

“I think it’s really important to still consider the Latino community when folks are giving,” Vergara added. “The cleaning industry is dominated by the Latino population. Cleaners are putting themselves at risk, especially when they don’t have insurance. Some buildings have doubled or tripled their staff to clean up buildings.”

At the last Esperanza food distribution, of the thousands of individuals who were receiving food, 63% of them reported they were currently unemployed.

Shakopee Diversity Alliance is working as an information platform so Latinos can get accurate information about COVID-19 from public health officials and other local leaders such as Minnesota House Rep. Brad Tabke, D-Shakopee, Contreras and Vergara.

On April 2, SDA hosted its first informational meeting virtually, and the Latino community was hit with another layer unfolding from the effects of the pandemic. The Zoom meeting Vergara was hosting was hacked, with racial slurs posted in the comments section. SDA had to quickly pivot its platform and use a different route, through an organization called Unidos Minnesota, to get the information out to families.

The video had nearly 5,000 views. Vergara said most folks who asked questions were worried about paying for groceries and housing.

As for the hackers, Vergara didn’t give them much thought.

“It’s hard to say if we were actually targeted,” she said. “(The slurs) were made to shock you and stop you from giving information to these folks, but either way our information was able to get out to the community.”

Vergara, who is also a wage theft investigator at the Minnesota Capitol, said the percentage of folks in Scott County who are undocumented and aren’t eligible for state and federal funding is the group of people she’s most committed to helping. She said the Minnesota Council of Foundations created a disaster recovery fund for the coronavirus, and businesses such as Best Buy, Wells Fargo, the Catholic Community Foundation and Land O Lakes have given money towards the fund. That’s the pool of money Vergara hopes to tap into and distribute to undocumented families like Garcia’s, who can’t benefit from public dollars.