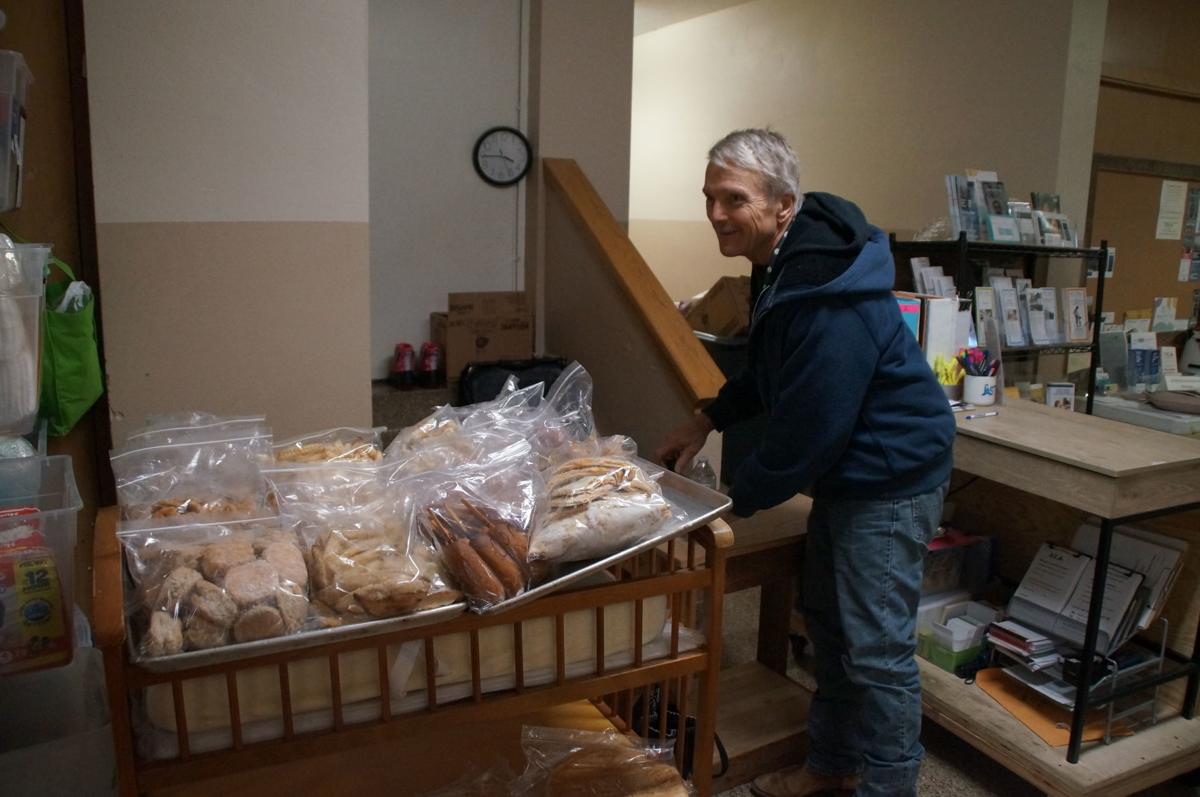 Shakopee Community Assistance co-founder Keith Chellsen prepares a rack of two-day-old food donated from the Shakopee School District in November 2019. His group used to give out resources at Loaves and Fishes events at the old St. Mark’s school building that offered warm meals to families in need three nights a week. 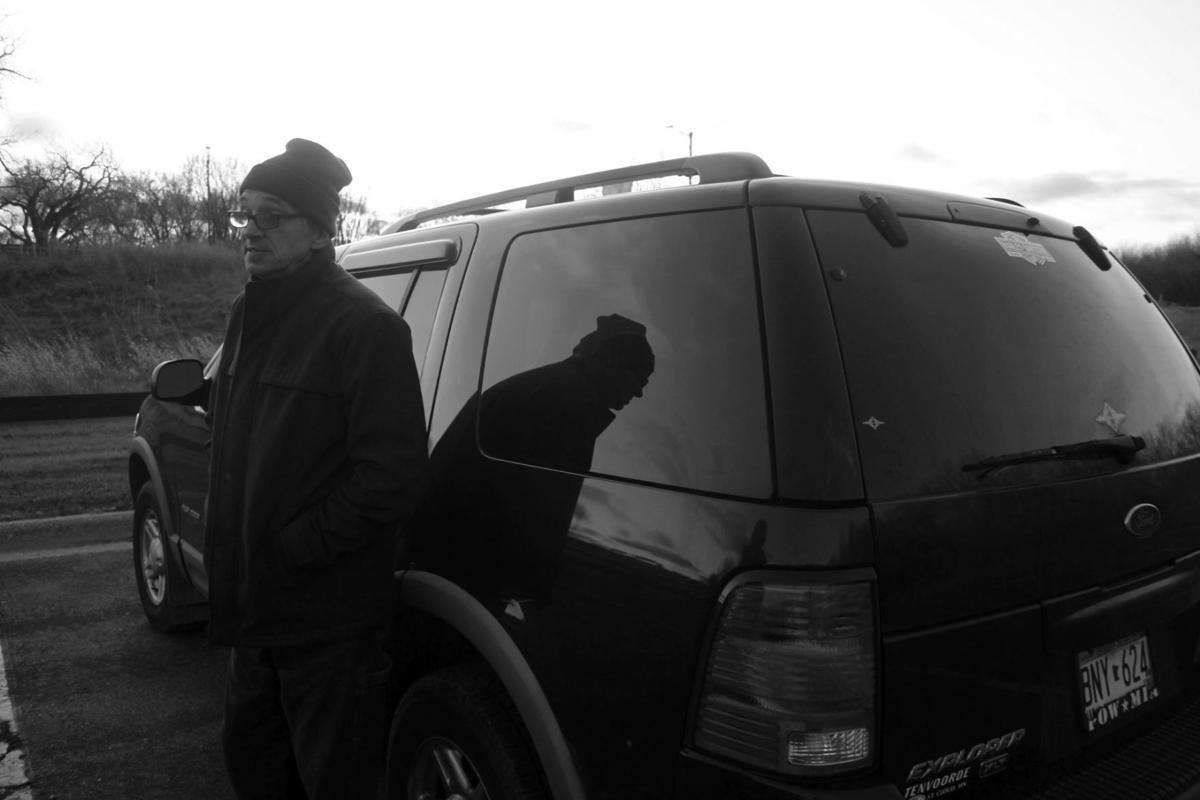 Kerry Kaufmann stands by his SUV parked near the Minnesota River in Shakopee. Kaufmann attended Loaves and Fishes three times a week to receive a hot meal and get a break from the cold.

Keith Chellsen sat at the entrance of St. Mark’s Church with a cart full of donated leftover school lunch food on a cold day in November.

An elderly woman walked through the doors and squinted at the bags of food. “French fries and mozzarella sticks?”

“You can take a bag on your way out,” Chellsen said.

Six years ago, Chellsen co-founded Shakopee Community Assistance, which gives out food, clothing, hygiene products and diapers for families with limited means. On Monday, Tuesday and Thursday evenings, the group has partnered with a statewide organization called Loaves and Fishes to provide warm meals.

On the first Monday of the month, the space becomes far more chaotic. A line hundreds of people long winds down Third Avenue. They were waiting to receive food and other necessities for free. Chellsen said some drove 30 miles.

But last week, SCA and Loaves and Fishes found out they would no longer be able to operate out of St. Mark’s Church in Shakopee, leaving the organizations without a home, and the hundreds of families who rely on them without access to their routinely free resources.

Desperate for a new home

Chellsen said SCA depended on the free price tag of its space in the old school building at St. Mark’s Church, which used to belong to the parish school, to operate. It’s the perfect space, he said, because it has a commercial kitchen and a large cafeteria area, with additional room to hand out things like clothing and diapers and cribs.

The SCA address listed on Google is Chellsen’s home address in Elko New Market. It doesn’t use an office and Chellsen doesn’t get paid.

“Every dollar that’s donated to us goes right back into the organization,” Chellsen said during a November interview, when the Valley News was reporting on homelessness in Scott County.

Loaves and Fishes, which is separate from SCA and is a larger nonprofit organization that offers free meals for families at 33 sites across the state, also heavily relies on using the St. Mark’s building for free. That’s why it’s not an easy task for SCA and Loaves and Fishes to relocate.

“I’m desperately trying to find a place down in Shakopee,” Executive Director of Loaves and Fishes Cathi Maes, said.

Maes said when she was notified of the closing, St. Mark’s referenced structural issues to the building, saying it was a safety problem to continue operating at that location. Shakopee Fire Marschall Tom Pitschneider said his team recently performed an inspection of the building, and although there were some issues related to the building, he said that wasn’t the reason the church’s doors were closing to the organizations.

Pitschnieder said some of those issues included simple fixes, like replacing exit signs on the doors.

A spokesperson for the Parish of Saints Joachim & Anne, which owns the St. Mark’s building, said in a statement that the fire inspector and the church’s insurance company raised significant concerns about the safety of the St. Mark’s school building.

“Those concerns were in addition to the overall building deficiencies of which we were already aware of,” the church's statement said. “As safety is our number one concern, we are closing the building as we investigate the remediation and cost of all these collective issues. Our next step is to obtain a property condition assessment and evaluate our options after that. We are grateful for the groups that have used the building for community outreach over the years and regret their need to relocate.”

Chellsen, like Maes, said the past few days SCA has been desperately running through ideas as to where in Shakopee it might be able to move.

“My partner and I are going to be talking to different churches to see if anyone would want to partner with us and be able to work our program into what they’re doing,” Chellsen said. “The next thing after that is looking into commercial property.”

In the meantime, he said, SCA will be distributing its resources from a trailer across the street from St. Mark’s Church. The next distribution day will be March 9, from noon to 6 p.m.

A haven for resources

The Loaves and Fishes and SCA home-base at St. Mark’s Church only opened its doors a few days each week, for a few hours at a time. But it provided an opportunity for Scott County’s low-income or homeless residents to populate in the same area, which created a natural intersection of several community resources.

Jamie Tulupan was homeless and eating a free dinner at a Loaves and Fishes community meal in Shakopee three years ago when Heidi Cianflone, a public health nurse, offered him a free health screening. River Valley Health Services was operating a floating clinic at Loaves and Fishes for low-income residents, and it flagged residents who showed warning signs in their screenings.

Tulupan was one of those patients. His blood pressure was off the charts and his feet were so swollen from sleeping upright in his van that he couldn’t fit in his shoes.

When Tulupan went to River Valley Health Services — which operates two clinics out of Chaska and Shakopee — he was diagnosed with high blood pressure and atrial fibrillation. He was able to receive medication for free through the nonprofit organization. And he could do it all without having to present medical insurance or a social security number.

Although Executive Director William Swanstrom said many of the River Valley Health Services clients are already well-connected with each other and to the nurses who volunteer, the clinic did appear at Loaves and Fishes from time to time to expose itself to a population base that would likely need affordable care.

This screening clinic is a quiet safety net for the poor and uninsured. It can barely keep up with demand.

“We’re concerned about Loaves and Fishes because they are a great program and part of a great network,” Swanstrom said. “I’m saddened that they have to relocate.”

Loaves and Fishes at St. Mark’s was also a warm space in the winter for people experiencing homelessness.

This fall, after Kerry Kaufmann was evicted from a Shakopee apartment, he bought a SUV for around $2,000 and perched an air mattress and MyPillow in the back seat along with a heaping pile of laundry, a couple bags of food and a blanket.

When the Valley News interviewed him in November, he was working a temp job, where he earned $14 an hour and relied on his car to provide heat during increasingly cold nights. During the day, Kaufmann tried to catch pockets of sleep near the Minnesota River. Three nights a week, he took refuge from the cold and enjoyed a hot meal at Loaves and Fishes.

“Seems like you can just never get warm,” Kaufmann said in November.

“Right now, I’m kind of looking for anything,” Chellsen said. “We’ve got 260 families who count on this.”