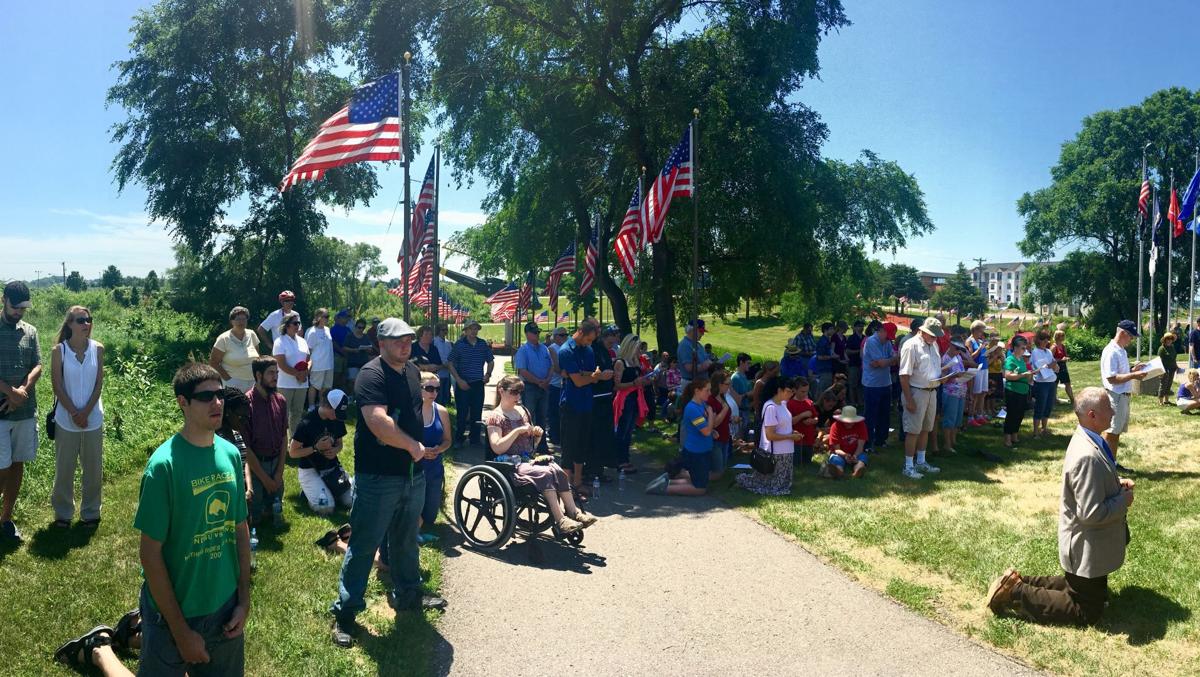 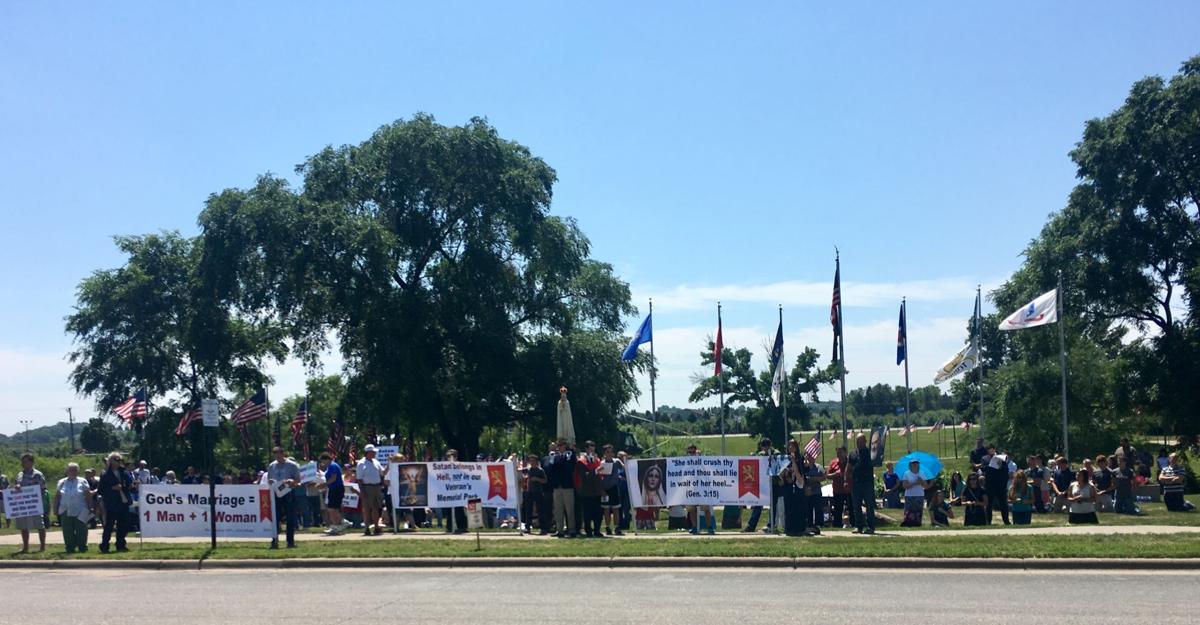 Rosary Rally participants held up signs such as “Satan is the eternal loser,” “We renounce the Devil and all his works,” “REJECT SATAN, “”Honk AGAINST Satan.” 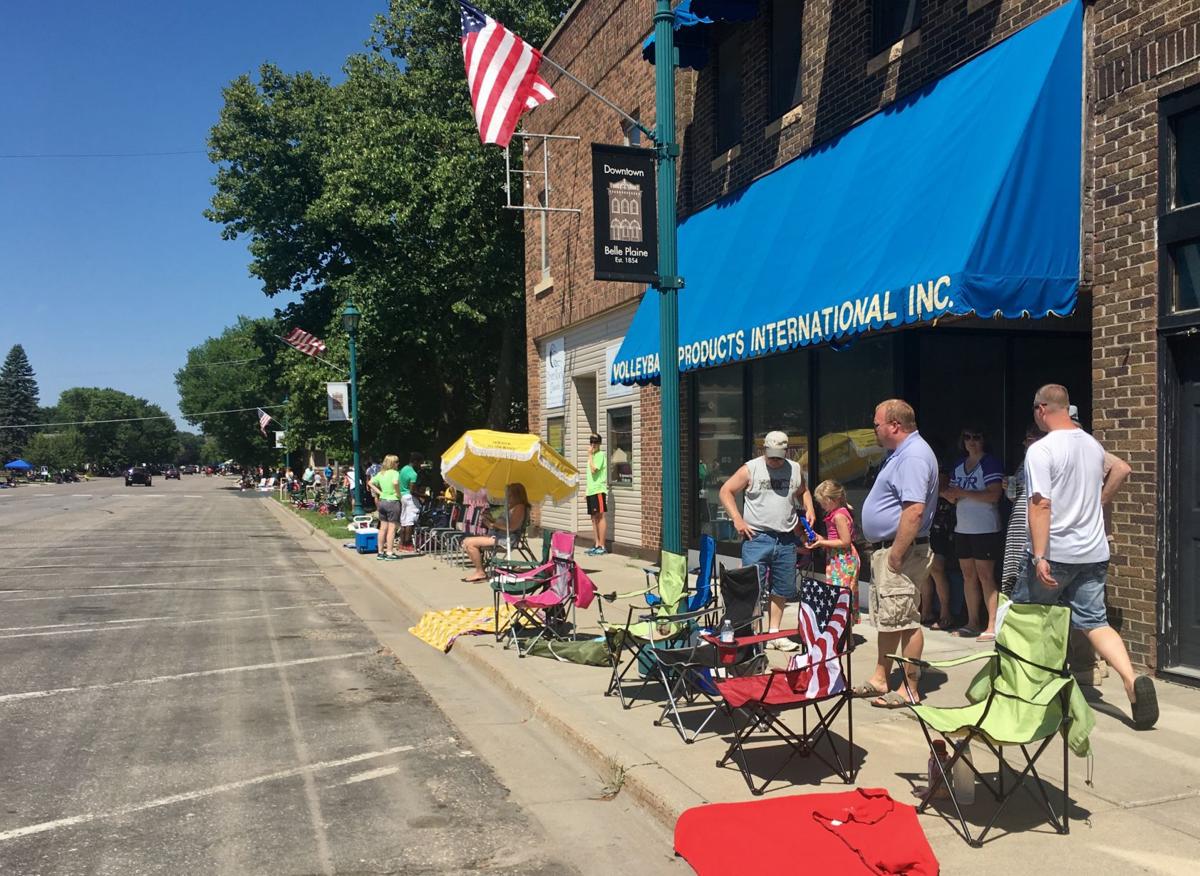 BBQ Days was tinged with controversy Saturday, as Catholics and Satanists held dueling events in the small town. 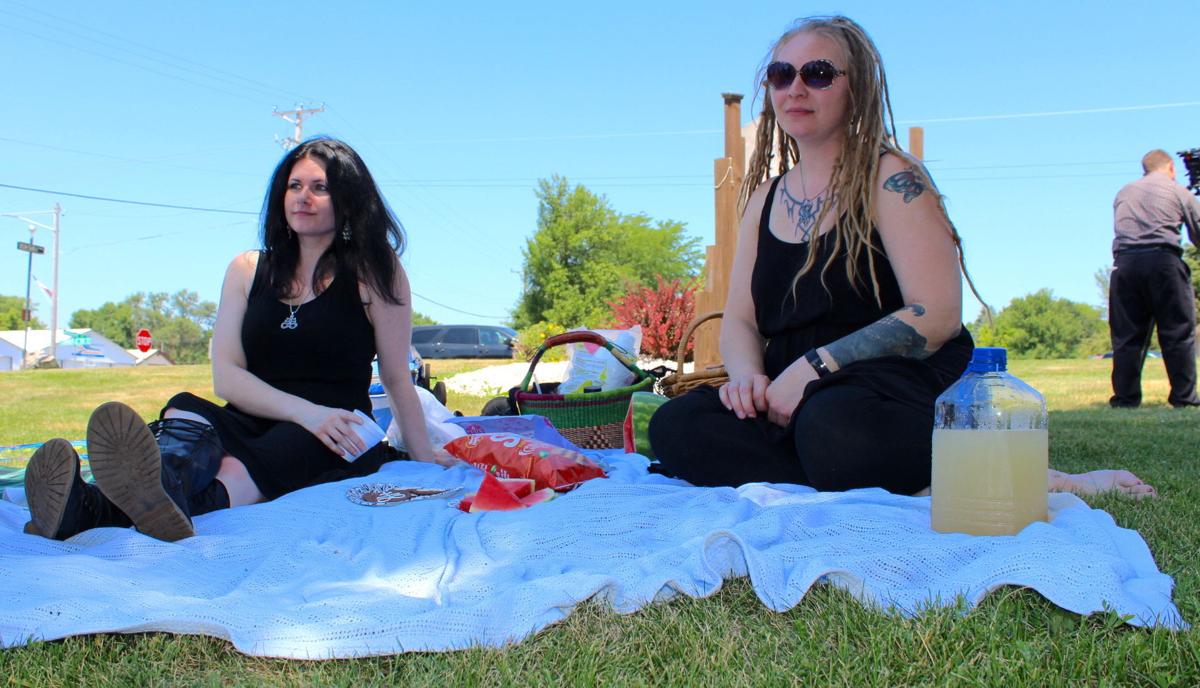 Kimber Starnes (left) and Janane laid out a picnic to share at Veterans Memorial Park in Belle Plaine during a Rosary Rally July 15. 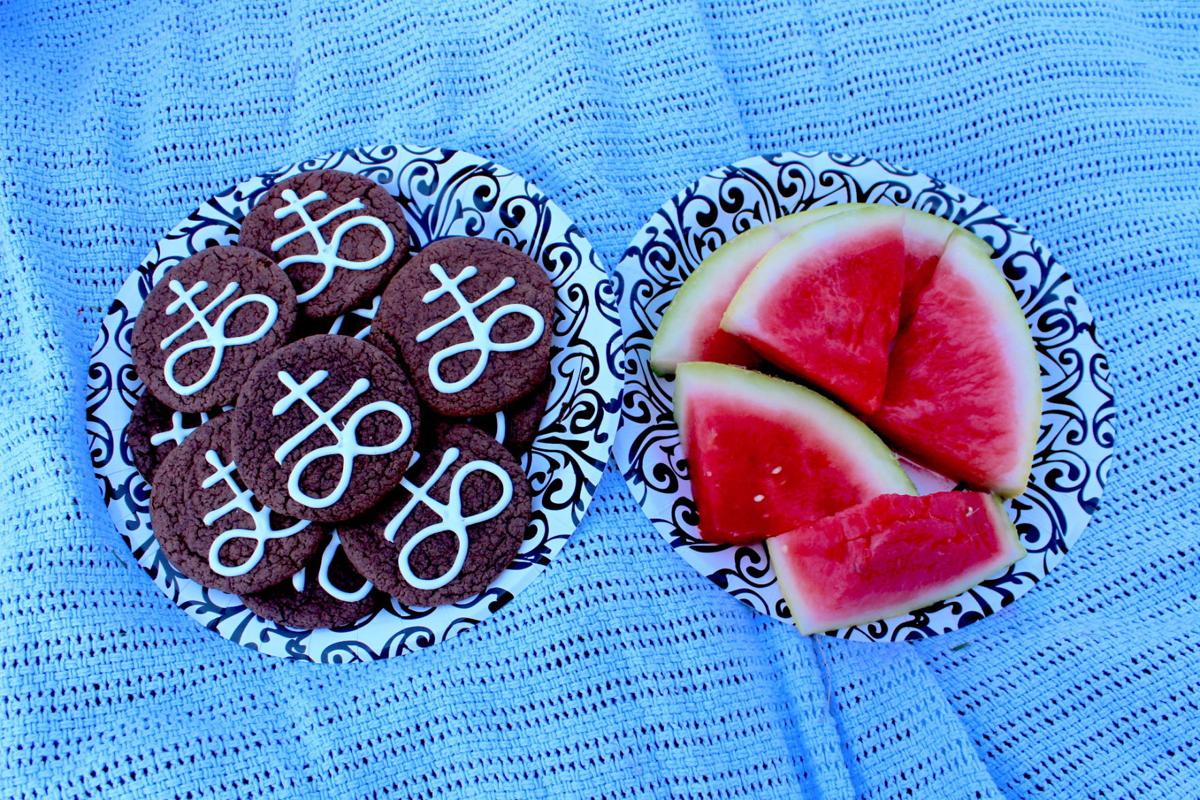 Rosary Rally participants held up signs such as “Satan is the eternal loser,” “We renounce the Devil and all his works,” “REJECT SATAN, “”Honk AGAINST Satan.”

BBQ Days was tinged with controversy Saturday, as Catholics and Satanists held dueling events in the small town.

Kimber Starnes (left) and Janane laid out a picnic to share at Veterans Memorial Park in Belle Plaine during a Rosary Rally July 15.

BELLE PLAINE — An hour before the parade, lawn chairs, blankets and pavilions lined Belle Plaine’s Main Street. Some had been out since Wednesday. BBQ Days is the biggest event of the year for Belle Plaine, population 7,009, and the parade is a main attraction, so you plan ahead and mark your spot if you want a prime view.

Families clustered along the side of the city’s main thoroughfare, chatting. A man napped. Parade participants headed toward the check-in spot. Store owners tidied in front of their shops.

They were the first of a couple hundred Catholics to fill the upper stretch of the park, praying and singing hymns together in protest of a yet-to-be-installed memorial sponsored by The Satanic Temple of Massachusetts. They would also be joined by a clutch of free-speech supporters and members of Minnesota’s Left Hand Path Community, which supports the memorial.

The design approved by the Belle Plaine City Council would be the first satanic monument on public property in the United States, with inverted pentagrams and an upturned soldier’s helmet.

But controversy hit the city months before The Satanic Temple’s Proposal.

“This has been going on for a year now,” said Belle Plaine city council member Cary Coop.

Last year, the city received a notice from the Freedom from Religion Foundation stating it was illegal for Veterans Memorial Park, city property, to feature “Joe,” a privately owned memorial featuring a soldier kneeling in front of a cross-shaped grave marker. It was overtly religious, the notice said.

So the city asked for the cross to be removed. People got upset. So the memorial was removed entirely. People got even more upset. More than 200 people packed into a winter city council meeting to protest. They set up crosses in the park and stationed people to watch them. Silhouettes of “Joe” popped up across the city, in windows, on houses and mailboxes, the awning of the local veterans club.

The silhouettes remain across the city, even after Joe went back into the park (cross and all) with a 3-2 council vote to create a “free speech” zone there, at the base of a hill. The vote allows for private organizations to place memorials featuring religious symbols in that area, so long as they met certain design requirements related to size and materials.

“I thought this would cause a lot of problems,” said Coop, who voted against the move. “You open up a free speech zone, and there’s a lot of people who want to be a part of it.”

“Here it comes,” Coop remembers thinking when he first saw the proposal.

Since then, the city has gotten upwards of 200 calls or emails a day, and the council will consider a proposal to rescind the policy Monday night, closing the park’s free speech zone.

If it passes, “Joe” would not be allowed in the park either — though he was conspicuously absent from the park on Saturday, anyway.

The family that owned the monument removed it from the city-owned park after hearing of the protests planned for the weekend, according to the “Defend Veterans Park” Facebook page. The bare patch of ground where the sculpture once stood, marked by an American flag, looked eerily like a grave itself.

Twenty minutes before the parade, families with coolers and baby strollers headed to their pre-claimed spots. A few latecomers toted lawn chairs, but didn’t appear too frazzled. The bright, July morning had turned into a sweltering July afternoon and anyone trying to move faster risked sweating off their sunscreen.

The crowd of protesters in Veterans Memorial Park, organized by the non-profit America Needs Fatima, murmured in unison, “Hail Mary, full of grace. Our Lord is with thee. Blessed art thou among women, and blessed is the fruit of thy womb, Jesus."

The group included Catholics from across the state, as well as Kansas, Arkansas, Pennsylvania, and Wisconsin. Most stood or knelt, though several elderly protesters perched on a bench and others sat cross-legged in the grass. About a dozen stood on the roadside, holding signs: “Satan is the eternal loser,” “We renounce the Devil and all his works,” “REJECT SATAN, ””Honk AGAINST Satan.”

That’s 16-year-old Clare Slobodnik’s favorite sign to hold. You can tell when people have seen it, she said. Even if they don’t honk, they often smile or wave. But a lot of people honk. She’s counted as many as 500 honks at other events she’s been to with America Needs Fatima. She would have counted today, too, but forgot her click counter.

“It’s really obviously wrong,” she said of the proposed satanic memorial and her reason for coming to the rally with her family from Topeka, Kansas. “You can’t support Satan. Ever.”

Even as she held the sign, shifting around her street corner and engaging with passing drivers — you have to be energetic to hold the “Honk AGAINST Satan” sign — Clare prayed, her fingers tracing the knots of a sky-blue rosary.

“Holy Mary, Mother of God, pray for us sinners, now and at the hour of our death...”

During the parade, the Rosary Rally was joined by a smaller force — a handful of freedom of speech activists and several members of Minnesota’s Left Hand Path Community. Most were dressed in black and declined to provide their last names. They converged on a shaded patch of grass, spreading out picnic blankets and fresh-cut watermelon, chips, crudités and homemade chocolate cookies emblazoned with satanic crosses.

The swirling design is not to be confused with the simple upside-down cross popularized by Hollywood. It’s only one of many, many misconceptions people hold, said James, who lives in Savage and grew up in nearby Jordan.

James doesn’t have any particular religious belief or affiliation. Most of the group gathered to support the satanic memorial are atheists or “atheistic luciferians.” That means they don’t believe in God or Satan or Heaven or Hell, but pay homage to “Lucifer” (another name for Satan in Christian tradition) as a kind of metaphorical exemplar of rebelling against power and tyranny, explained a woman named Janane.

They’re a counterbalance to traditional Christianity, not spooky, red-eyed demons that creep up on people in the night or pedophiles, another member of the group added.

“It seems they hate that we exist,” Kimber Starnes of St. Paul said as she looked at the Rosary Rally. “Their signs are not kind. And when we sat down here to share the shade, some of them moved away.”

Regardless, both groups have a right to be there and express their opinions, they said.

“It goes back to the fact that freedom of speech exists. Everyone has a voice,” said Kevin, of Prior Lake, who serves in the Army Reserves and is an atheist and not affiliated with the Left Hand Path community. “That’s one of the things that we fought for and fight for.”

After the parade, horseback riders, floats, and recreational vehicles toting signs and sunburned riders looped their way around town on side streets and headed home.

Several Catholics from the Rosary Rally remained in the park, making a slow circuit on its walking path, studying the recently refurbished helicopter, displayed high enough overhead to be visible from the highway, and coordinating afternoon plans with family and friends. A couple rosaries even remained behind, looped onto the branches of a couple evergreens near the park entrance.

The Left Hand Path Community members and free-speech supporters settled into their picnic, pulling sandwiches out of a traditional wicker picnic hamper and handing out cookies and organic lemonade to anyone nearby who appeared even slightly peckish or dehydrated. They hadn’t been able to tuck in earlier as they kept getting approached by news crews.

Coop headed to BBQ days to get a malt milkshake from the Girl Scouts (his annual BBQ Days indulgence), as did Kevin. It was his sixth time at the event, which he has only recently missed when away on military duty. He particularly likes the cheese curds.

And the day blazed on.

Tory Cooney is an enterprise reporter with a love of features writing. She is vivacious, resourceful and enjoys cooking, quilting, snowshoeing and Post-it-notes.