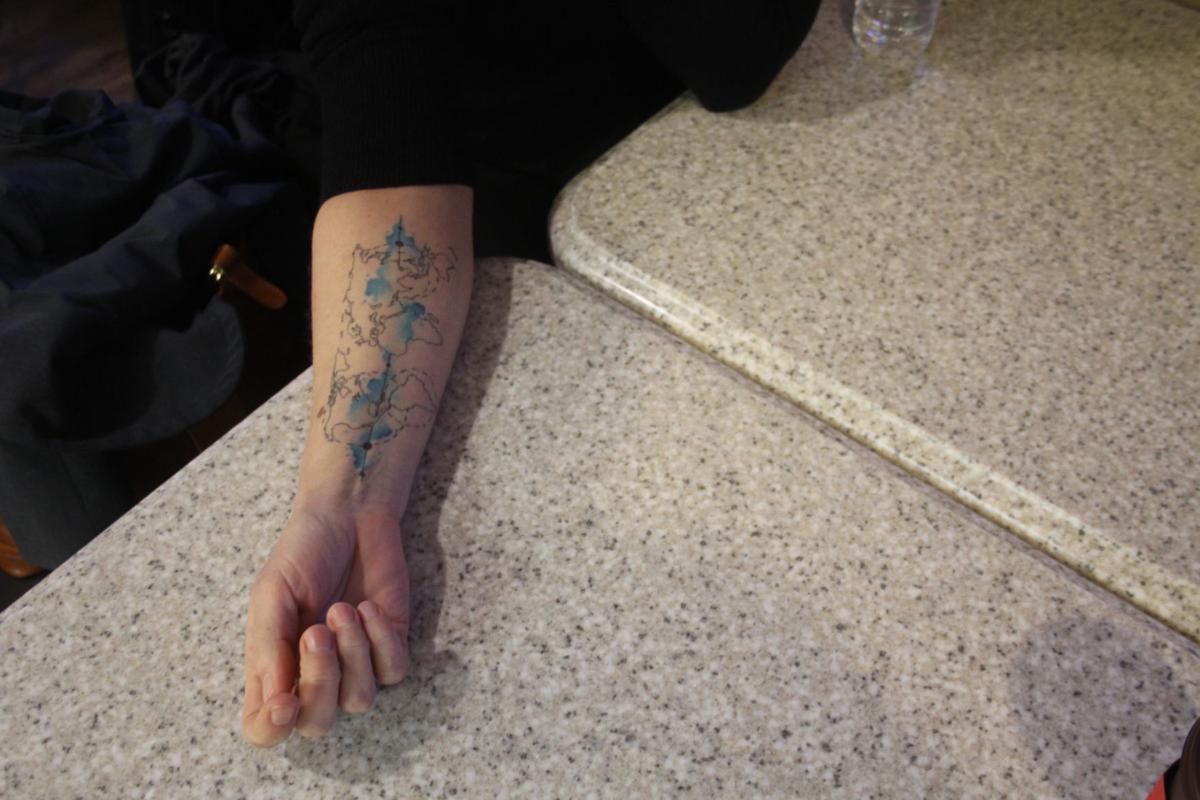 Ornela Beslagic-Bjerke wears a world map tattoo, a new addition she got on her 50th birthday this year. Beslagic-Bjerke came to the U.S. in the 1990s as a refugee from the Bosnian civil war. 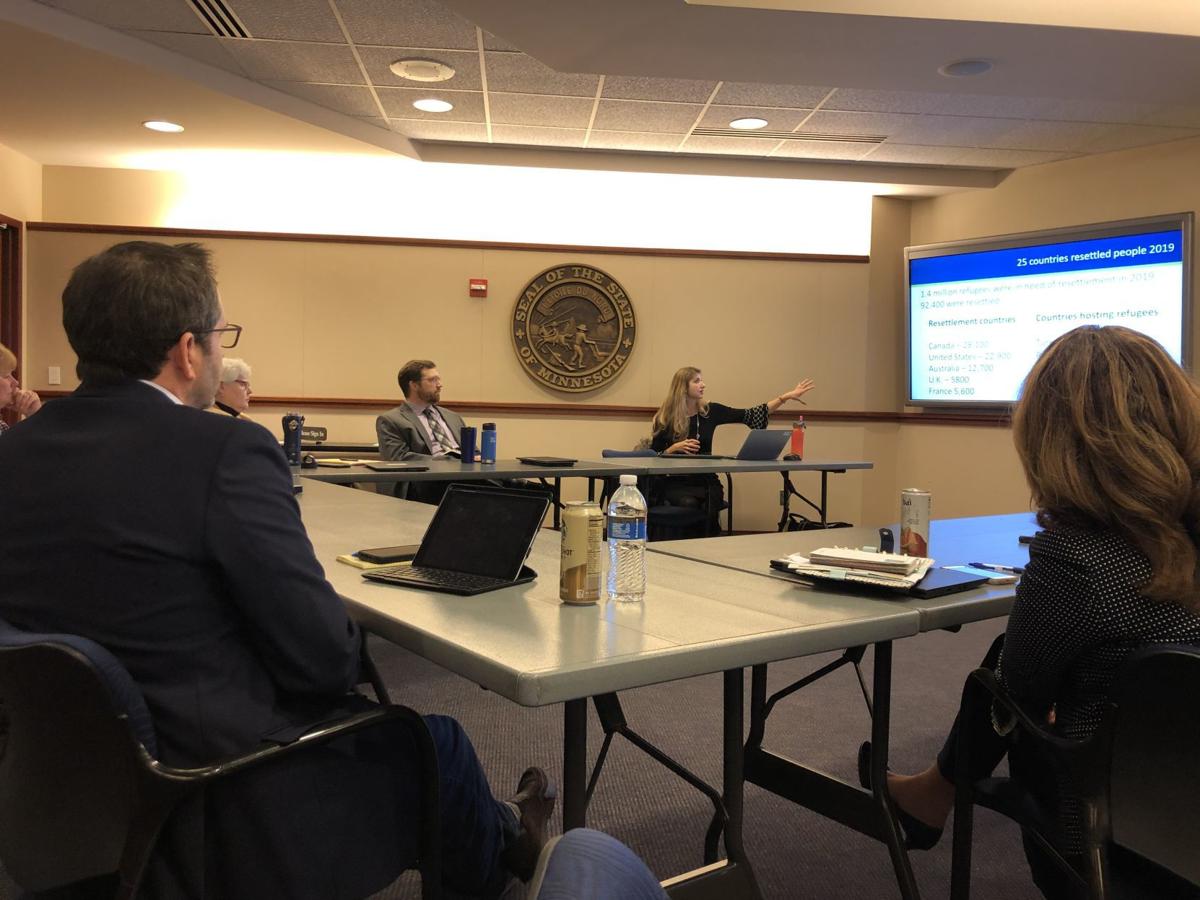 Patricia Fenrick, who works in the Minnesota Resettlement Programs office at the Department of Human Services, provided a presentation to Scott County commissioners about refugee resettlement at a county board workshop Feb. 4 for the commission to learn about the process and how an presidential executive order might affect Scott County.

Ornela Beslagic-Bjerke wears a world map tattoo, a new addition she got on her 50th birthday this year. Beslagic-Bjerke came to the U.S. in the 1990s as a refugee from the Bosnian civil war.

Patricia Fenrick, who works in the Minnesota Resettlement Programs office at the Department of Human Services, provided a presentation to Scott County commissioners about refugee resettlement at a county board workshop Feb. 4 for the commission to learn about the process and how an presidential executive order might affect Scott County.

Ornela Beslagic-Bjerke of Prior Lake was a Bosnian refugee. Born in what was then Yugoslavia in eastern Europe, she survived the civil war and four-year-long Siege of Sarajevo in the early 1990s.

More than 25 years later, she still remembers the feeling of Sarajevan winters through plastic-wrapped windows after Serbian artillery broke all of the glass.

With the birth of her daughter, Ena, in 1993, Beslagic-Bjerke knew she had to leave. With her 1-year-old daughter and seven suitcases, she escaped the siege through the Bosnian resistance army’s tunnel system and went to Croatia, where she applied for refugee protection with the United Nations.

“I just wanted to go as far as possible from that place and start a new life, somewhere in peace and just be able to live,” she said.

President Donald Trump has sharply reduced the number of people accepted each year, and in 2019 he issued an executive order requiring states and counties to choose whether to continue taking them in.

On Jan. 15, a federal judge's ruling in Maryland temporarily halted the order after refugee resettlement organizations sued, but the legal dispute could continue. In the meantime, it has pulled local governments like Scott County into an international debate.

Patricia Fenrick, who works in the Minnesota Resettlement Programs office at the Department of Human Services, spoke with Scott County commissioners about refugee resettlement at a county board workshop Feb. 4 held for the commissioners to learn about the system — they didn't vote on refugee acceptance.

Scott County received four refugees in 2019 and 79 in the past five years, Fenrick said.

One topic Fenrick emphasized was the difference between immigrants and refugees. An immigrant is a person born in another country who has come to the U.S. for any reason. Refugees, like Beslagic-Bjerke, flee from war and persecution and have received protection from the United Nations and the U.S. government.

They're also distinct from asylum-seekers, who flee to the U.S. and request protection here.

People obtain refugee status overseas at refugee camps, where they are vetted by federal agencies for months, sometimes years, with DNA samples, interviews with family members and friends and a trip to the refugee applicant’s home before receiving approval to resettle.

In 2020, the federal administration capped the number of refugees allowed to resettle in the U.S. at 18,000 — the lowest since Congress created the modern refugee program in 1980. The nation’s historical average for refugee allowance is capped at about 90,000 people, Fenrick said.

When refugee applicants are granted refugee status, the United States government will pay for their plane ticket, but refugees must pay it back. They don't choose where they arrive but can offer a preference if they have family members or friends in a certain part of the country. After their primary resettlement, refugees are free to move wherever they’d like.

When refugees arrive, the federal government also gives each person $1,125, which is usually spent within the first week on a rental deposit and food. Resettlement groups and volunteers also chip in to help.

“So after that it’s, ‘Enjoy. Welcome,'" Scott County Chairman Dave Beer said at the county workshop.

“Yes, that’s the only refugee-earmarked money that comes,” Fenrick replied. “And then they are eligible for public benefits based on their income … just like anybody else.”

Commissioner Michael Beard said he appreciated the vetting process and called refugees “an extremely motivated and precious group of people.” He wished other immigrants got the same scrutiny to keep out gangs, for example.

“But that’s outside our purview, I know," Beard added.

”As a county, we don’t get to say who rents an apartment or who lives here,” she said.

Fenrick added many refugees, though here legally, are afraid because of misconceptions like those, given their previous experience with persecution and antagonistic governments.

“I mean, we’ve had people come to government agencies and ask if they need to start fleeing again," he said.

Increasing polarization and political rhetoric over the last few years has reminded Beslagic-Bjerke of Sarajevo leading up to the war.

“I’m not going to lie, some days how people are towards each other feels very familiar,” Beslagic-Bjerke said. “One side against another.”

When Beslagic-Bjerke was granted resettlement, she requested a placement near the only people she knew in the United States: two Bosnian couples who left the country before the war and came to Burnsville.

Several months after applying, Beslagic-Bjerke flew from Croatia to the Minneapolis-St. Paul International Airport. She moved to an apartment a few blocks away from the couples and took a job as a chef at a local Chili’s in her first week, though she had master's degrees in math and biology. She bought an old station wagon off of her friends.

Beslagic-Bjerke decided not to participate in several governmental programs that provide refugees with assistance as they learn English and search for a job. Instead she relied heavily on the informal support system of her nearby friends.

“I just felt like I don’t have a year to waste,” she said.

She used closed captioning on her TV to learn how to pronounce a new set of vocabulary. For a time, two mattresses, a chair and a cardboard box for her daughter to play with were the only pieces of furniture in the apartment.

Over 18 years, Beslagic-Bjerke worked her way up to managing partner at the restaurant. Six years ago she took a job as the director of nutrition at a regional hospital.

More than a decade ago she helped her parents, who were living as refugees in another country, move to the United States and become citizens.