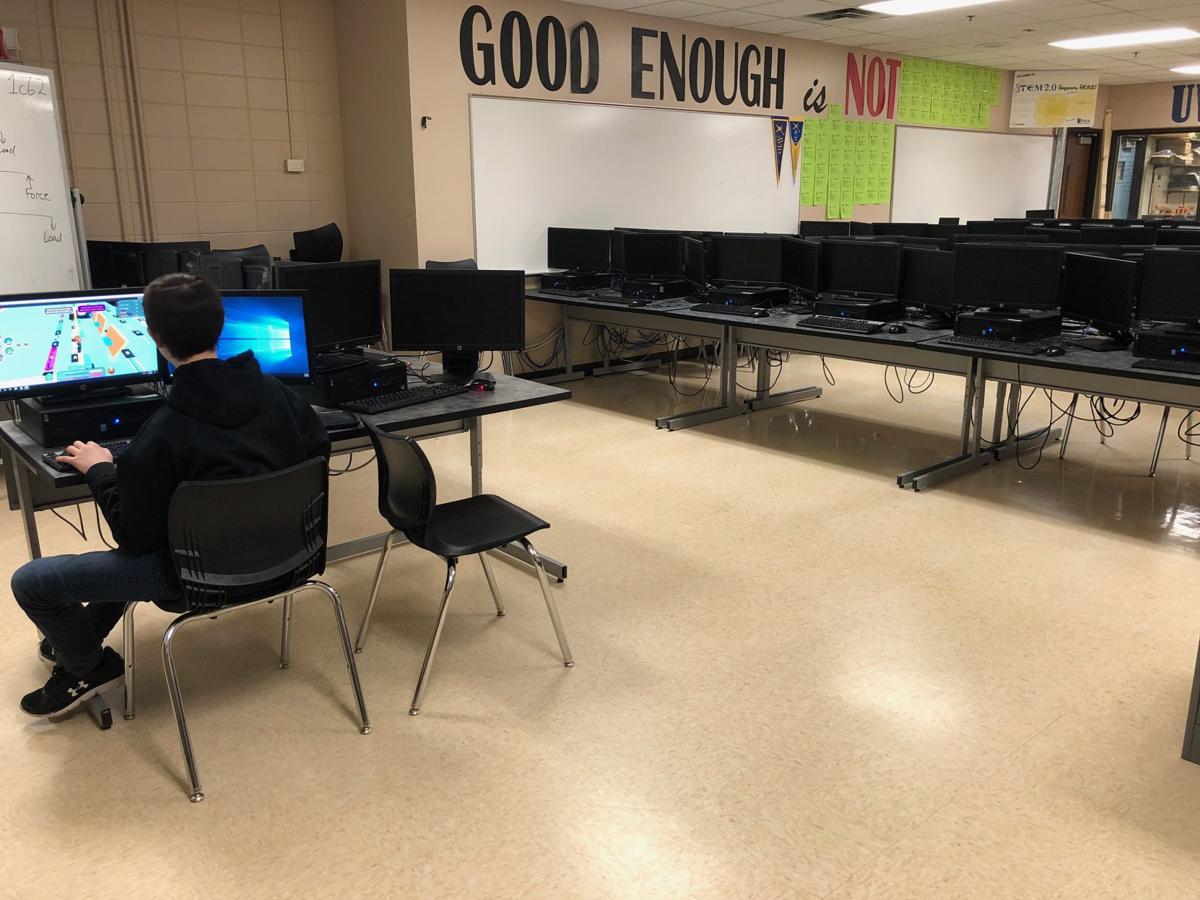 A student at East Middle School, who is playing a computer game in the lab, was one of only 36 students who showed up for school on March 17, the day before all schools in Minnesota closed to stop the spread of COVID-19. 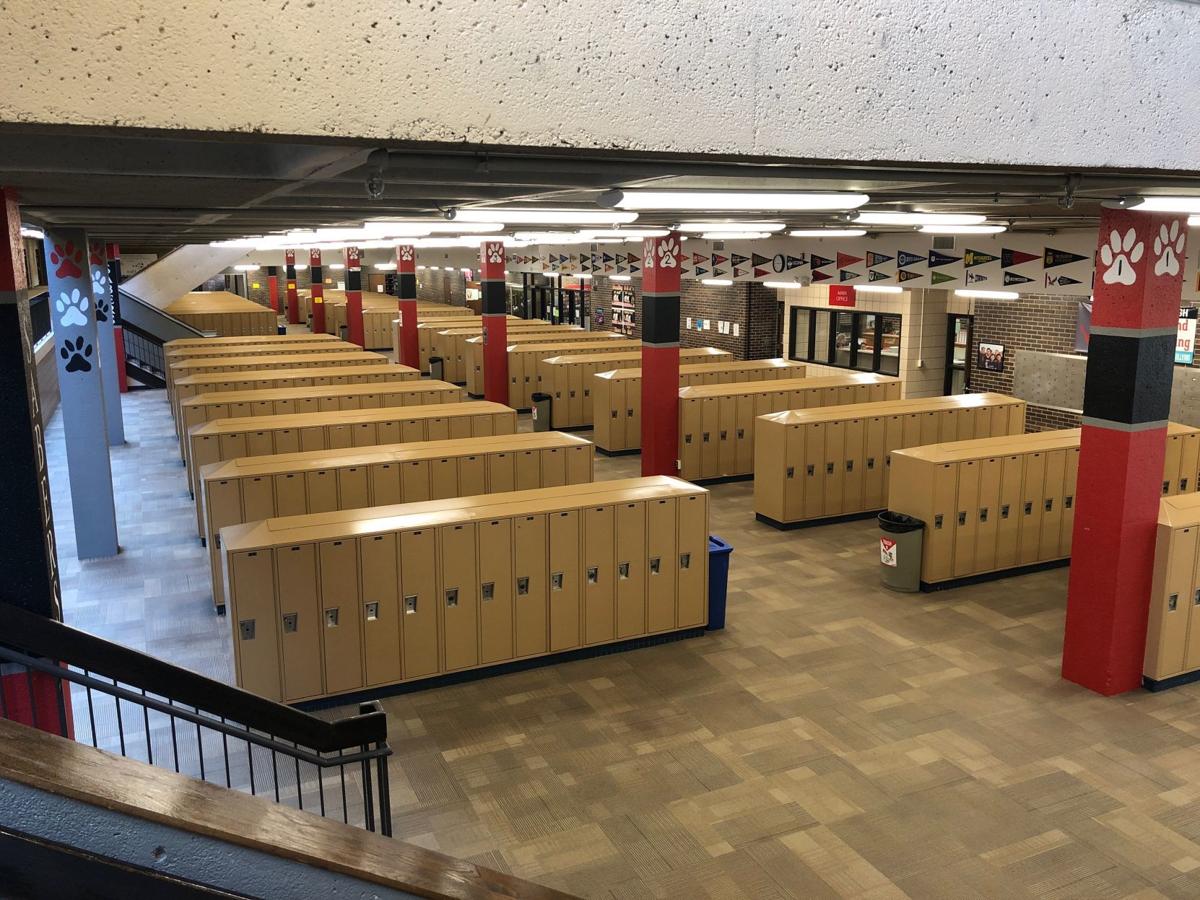 East Middle School was eerily quiet on March 17 — a Tuesday — despite the fact that the school was technically still open. Beginning March 18, all schools in Minnesota will be closed for at least eight days to stop the spread of COVID-19. 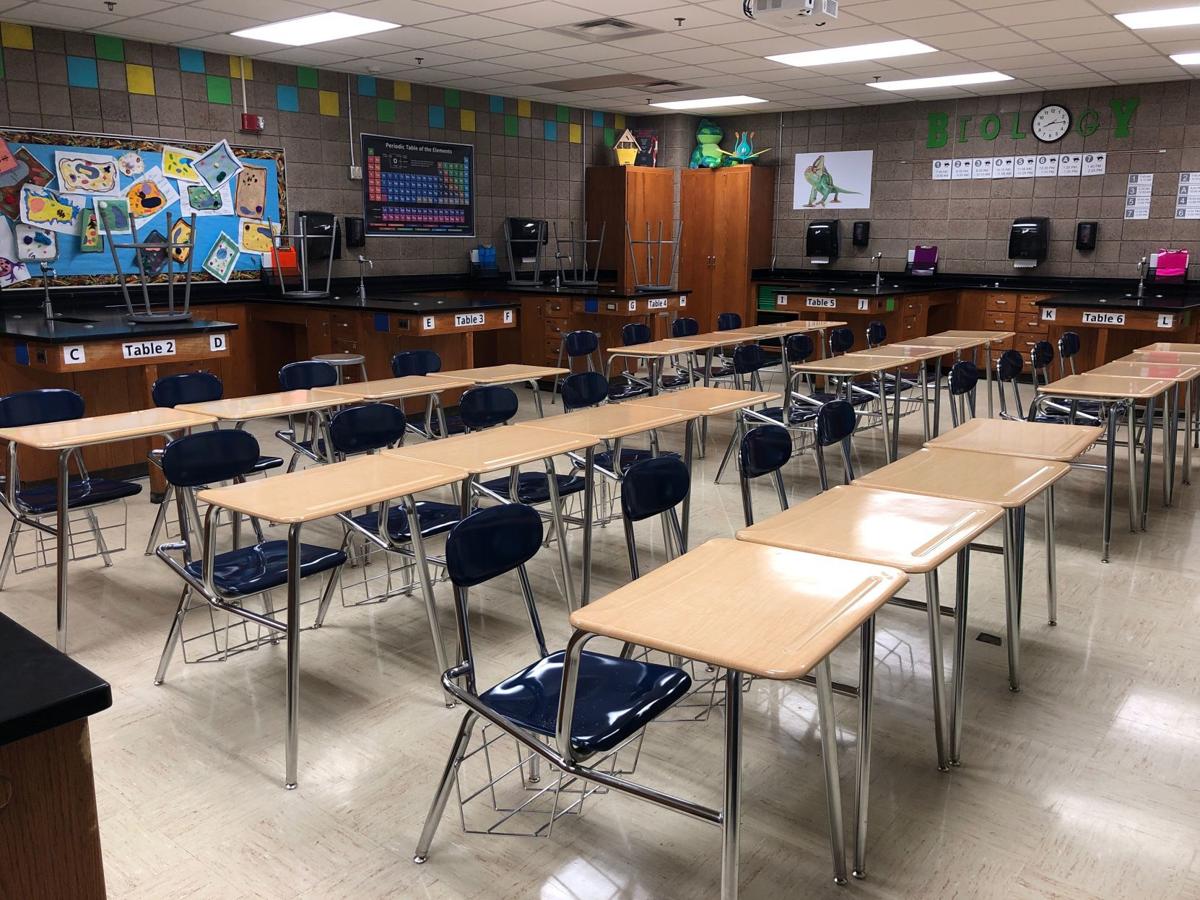 A science classroom at East Middle School is totally empty. Science teacher Jen Brophy said teachers are unsure of what to do other than plan for possible online learning lessons, which they may have to resort to if schools are closed longer than eight days.

A student at East Middle School, who is playing a computer game in the lab, was one of only 36 students who showed up for school on March 17, the day before all schools in Minnesota closed to stop the spread of COVID-19.

East Middle School was eerily quiet on March 17 — a Tuesday — despite the fact that the school was technically still open. Beginning March 18, all schools in Minnesota will be closed for at least eight days to stop the spread of COVID-19.

A science classroom at East Middle School is totally empty. Science teacher Jen Brophy said teachers are unsure of what to do other than plan for possible online learning lessons, which they may have to resort to if schools are closed longer than eight days.

Jen Brophy, a seventh-grade science teacher at East Middle School, sat in an empty classroom at 9 a.m. on a Tuesday morning, the day before all schools in Minnesota would officially close for at least eight days under an executive order from Gov. Tim Walz to stop the spread of COVID-19.

On March 17, with the schools still technically open, there were 36 students at East Middle School, and most of them would be getting picked up soon. One student sat in the computer lab, the only soul in the room, and played a game on a Dell desktop. Others congregated in small groups in mostly-empty classrooms occupied by the remaining teachers. In many classrooms, chairs hung upside-down atop desks as if summer break had begun. Common areas echoed silence against metal lockers, many of them emptied.

Since Shakopee’s spring break falls the week after the executive order ends, Jen Brophy and her husband, Tim Brophy — who also serves on the Shakopee School Board — will be spending at least the next three weeks with their sixth-grade and 10th-grade daughters. The high schooler isn’t too keen on the idea that she may have to spend a significant amount of time away from her friends, Jen Brophy said. But the Brophy family is fortunate, because their greatest inconvenience will be finding a way to keep boredom at bay while the virus runs its course throughout Minnesota and the rest of the country.

Since Jen Brophy is an educator, and Tim Brophy has the capacity to work from home, they are able to structure their days in a way that won’t mess with their daughters’ normal school day routines. For the next three weeks, they plan to go out to the barn where their horse lives and spend time with the animals — where there will certainly be few people — go on bike rides and take hikes. And lately, they’ve been watching movies from the girls’ childhood.

Earlier this week, Jen Brophy said, they watched “Spirit: Stallion of the Cimarron.” Tonight, they’ll have to sit through a Barbie movie their sixth-grader picked out — one of her favorites from when she was just a few years old. The girls will be able to spend limited time with their friends, but only if they are outside and stand at a distance.

“I’ve talked with other parents about what we’re comfortable with,” Jen Brophy said. “We decided if they’re on bikes and scooters outside, they can interact in that way. But I think we need to be chaperoning that situation, so they don’t, you know, decide to dig up a worm and huddle together to look at it,” she said, laughing.

The Brophys, along with other parenting friends, set up the Google Hangout app on their girls’ phones so they can video chat with each other.

“We’re kind of just letting our kids be kids for the next few days,” Tim Brophy said. “But we’ll move into what would be consistent with home school education.”

The Brophy’s neighbor, Jon Yu, and his wife don’t have the ability to work from home. Yu works for the U.S. Postal Service, and his wife assembles medical parts in Bloomington. For the time being, they’ve had to use paid time off, alternating who will stay at home with their 9- and 11-year-old children.

Yu’s nephew and niece, who are young adults, have been able to help out some, but they have online school to worry about, Yu said, so he can’t use them every day.

When asked about his plan if school were closed for the rest of the year, Yu laughed despairingly.

“I don’t know what’s going to happen if it goes that far,” he said. “You can only take so much time without work. We’ll take it week by week. That’s all we can do. That’s all anyone can do.”

Jen Brophy said the teachers at East Middle School are aware of social distancing and understand the need to spread out. But students are not.

“The students are elbow to elbow, walking down the hallway with their friends and touching each other’s phones,” she said. “Yesterday, I had to explain to the three or four kids in my room why they had to spread out.”

As a science teacher, Brophy teaches a unit each year on viruses. This year, the virus unit was scheduled for the spring. Perhaps her students won’t miss a beat with that unit, as they watch a global pandemic sweep the nation in one big tidal wave. Or maybe not.

“I think there are a lot of parents not communicating about the virus,” Brophy said. “Kids were here with big smiles, and didn’t know much about the gravity of the situation. I realized their parents probably didn’t want them to know about any of this.”

As educators grapple with the possibility of online learning, and some parents begin preparing for the all-too-soon “I’m bored” complaints from their homebound children, some families are left wondering where their children, who normally eat lunch at school, will get their meals. Other families may simply want a break from meal preparation or an excuse to get out of the house.

At Shakopee Public Schools, more than 35% of students qualify for free or reduced lunches, according to data from the Minnesota Department of Education. Without school lunches, some of those students may not have healthy lunch options at home.

So starting March 18, the Shakopee school district is distributing bag lunches for all children at Shakopee High School from 11 a.m. to 1 p.m., as well as meal delivery via school bus from 11 a.m. to 11:30 a.m.

Food pickup at the high school will be located on the north side of the building, at the 17th Avenue entrance, and the delivered meals will be available at Mobile Manor, Jackson Heights, Bonnevista Terrace, Valley Haven, Eagle Creek Townhomes, Sarazin Flats Apartments, Clifton Townhomes, Sweeney Elementary, Pearson Elementary and East Middle School.

“I am proud and appreciative of the people working in our school district and how they are responding to meeting the needs of our community in these challenging times,” Superintendent Mike Redmond said. “Together, our community will meet the challenges we are facing with grace, dignity, and deep compassion for our neighbors.”

The district is also offering free childcare for children of health care providers, emergency medical personnel, law enforcement personnel, public health employees, firefighters and other emergency workers whose jobs are critical to the state’s response to COVID-19. The children must be ages 3 to 12, and it is run by River Valley YMCA at Sun Path Elementary. The emergency workers can drop their children off for care from 7 a.m. to 5:30 p.m.