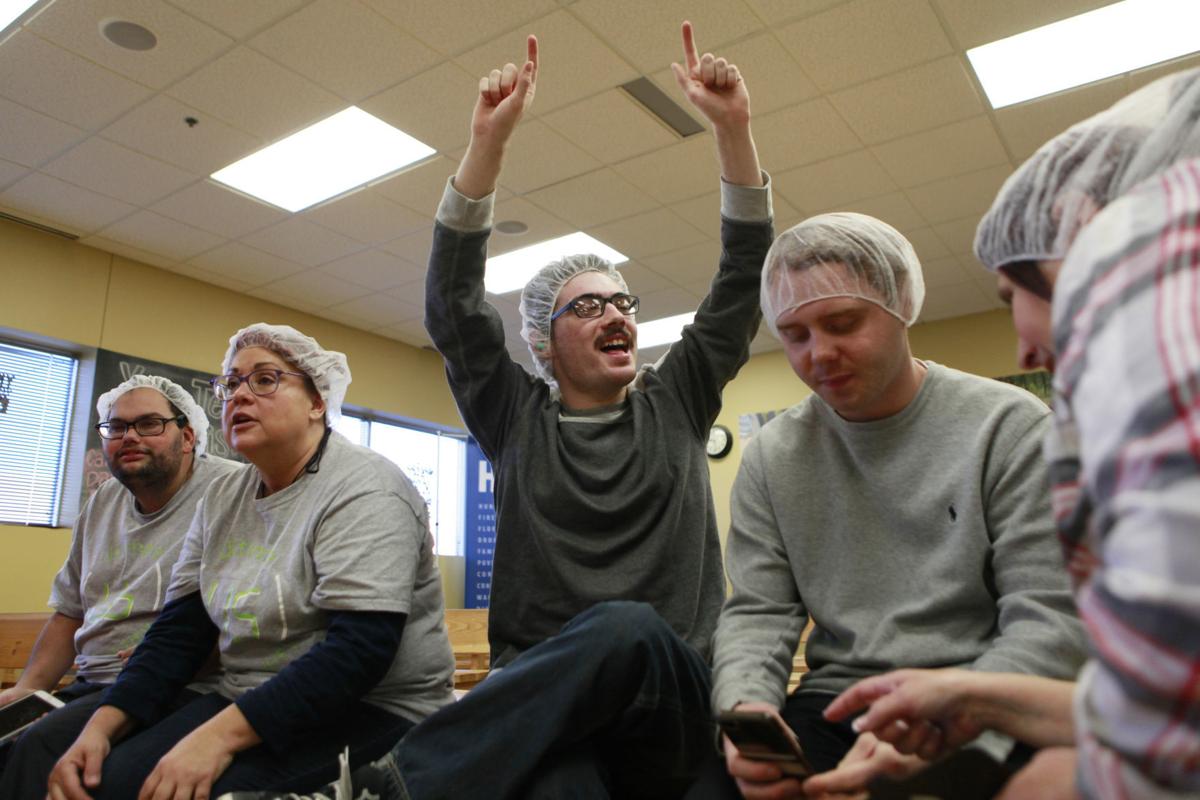 Ben Bakke, a participant in the Ultimate Sustainability program for young adults with autism, shows his excitement while waiting to begin packing food for the charity Feed My Starving Children in Chanhassen on Oct. 16. Ultimate Sustainability aims to help him and others become more independent by building work and social skills and providing fun group activities around the southwest metro. 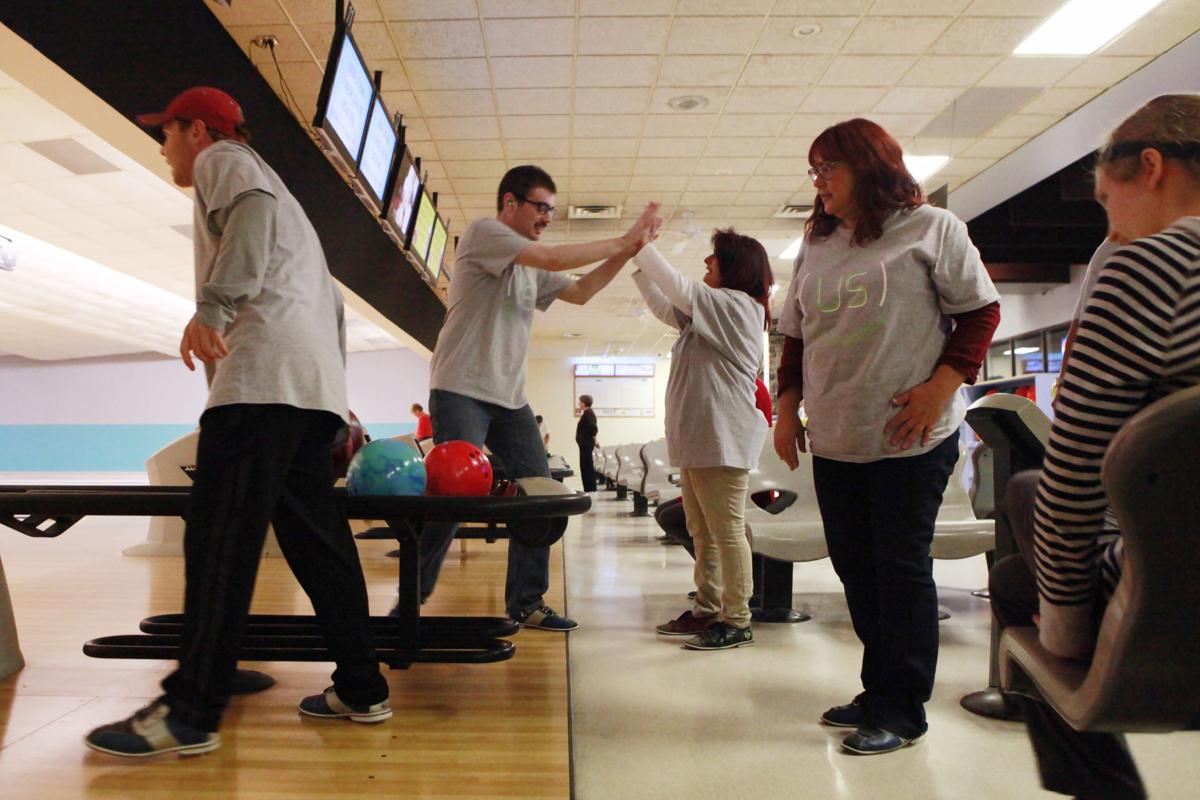 Ultimate Sustainability participants and staff members bowl at Shakopee Bowl in October. A state advocate for people with autism said that while services for autistic adults aimed at housing and employment are relatively plentiful, it’s rarer to find one for recreational activities like bowling. 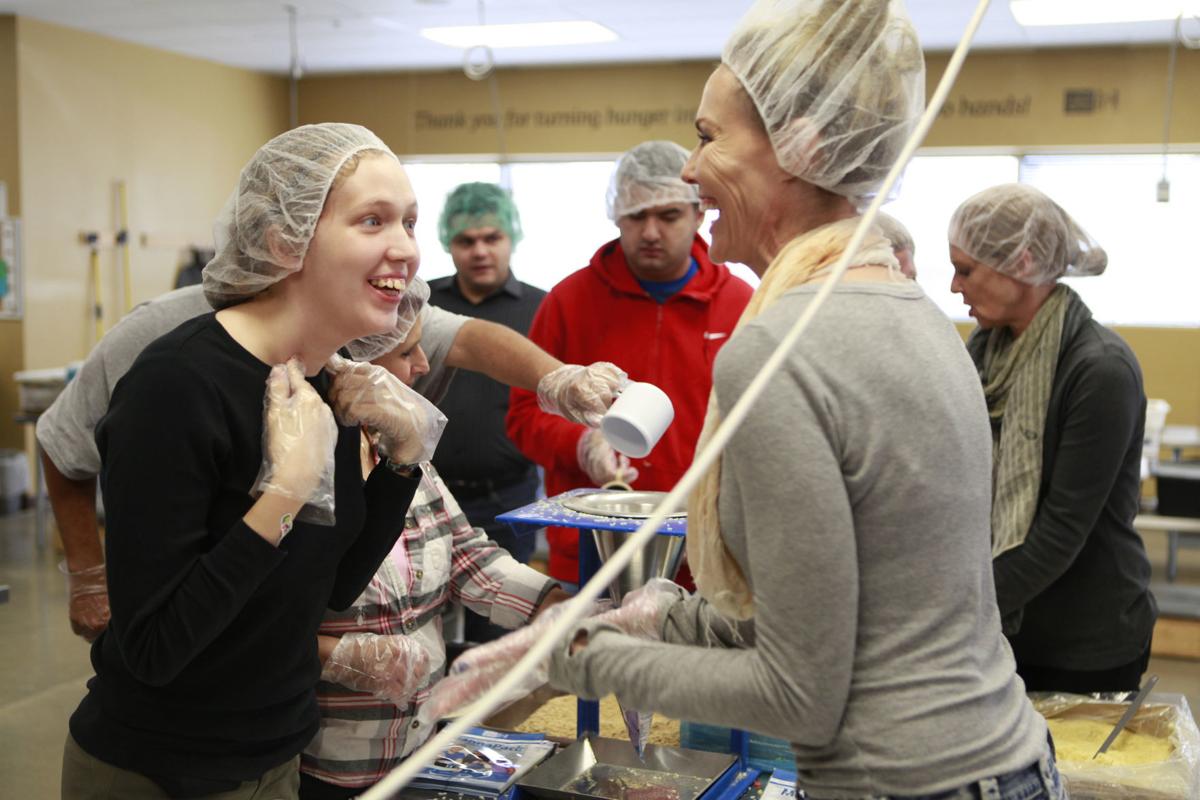 Amy Stenseth, an Ultimate Sustainability participant, shares a laugh with group co-founder Stephanie Welter while volunteering at Feed My Starving Children. Welter had dropped a bag of soy and rice onto the table in front of them, sending some rice grains flying.

Ben Bakke, a participant in the Ultimate Sustainability program for young adults with autism, shows his excitement while waiting to begin packing food for the charity Feed My Starving Children in Chanhassen on Oct. 16. Ultimate Sustainability aims to help him and others become more independent by building work and social skills and providing fun group activities around the southwest metro.

Ultimate Sustainability participants and staff members bowl at Shakopee Bowl in October. A state advocate for people with autism said that while services for autistic adults aimed at housing and employment are relatively plentiful, it’s rarer to find one for recreational activities like bowling.

Amy Stenseth, an Ultimate Sustainability participant, shares a laugh with group co-founder Stephanie Welter while volunteering at Feed My Starving Children. Welter had dropped a bag of soy and rice onto the table in front of them, sending some rice grains flying.

SHAKOPEE — Autism doesn’t go away, but public school support and services for the disorder stop at age 21.

A Shakopee-based provider aims to take over from there, giving young adults with autism daily opportunities to volunteer, build job and social skills and simply have fun together.

Two locals started Ultimate Sustainability this month for people like their sons, who both have autism and recently finished public school. The two said their group is a unique, community-driven alternative to such options as staying home all day or going to daycare-like programs for adults with disabilities.

“They do not spend the day here. They are out and about,” Stephanie Welter, Ultimate Sustainability’s president and co-founder, said of the program’s 10 or so participants, who hail from Prior Lake, Shakopee and elsewhere in the Twin Cities metro.

Activities so far have included a few rounds of bowling in Shakopee and packing food together in Chanhassen for Feed My Starving Children, a religious nonprofit that ships food around the country and world. Ultimate Sustainability's Shakopee location just off Highway 169 includes a game room — ideal for practicing sharing and following rules — and computers that could soon be used to practice time sheets and other job basics.

"These are the things that build self-esteem and success for them," co-founder and CEO Kathryn Marshall said. "I feel blessed at this opportunity."

Welter and Marshall said they both previously helped start support programs in Minnesota for their sons and other kids their sons' age as they grew up; Ultimate Sustainability is just the next step in that approach. The pair plan to grow the program, anticipating two dozen participants by the end of the year at Shakopee and eventually more locations, and to stick with their participants as they age.

“Our goal is to move them closer” to at least partial independence in their daily lives, Welter said. “They’re smart, they’re beautiful, they’re kind.”

Autism spectrum disorder affects people in different ways and to different degrees, but it often includes social impairment, such as difficulty with holding conversations and generally interacting with people, and narrow or repetitive behaviors and interests, according to the American Psychiatric Association.

Minnesota’s Autism and Developmental Disabilities Monitoring Network counts about one in 40 children with the disorder, most of them diagnosed around when they start going to school. The disorder is the primary disability for more than 18,000 children and adults younger than 21 in the state, according to the Minnesota Autism Spectrum Disorder Needs Survey for 2015 and 2016.

All of this means a “tsunami” of older children are finishing school and starting the rest of their lives, Welter and Marshall said.

Among them is Tony Judd, an Ultimate Sustainability participant with an easy smile who loves card games and bowling and answers to the nickname T-Money. His mother, Selena Judd, said he seemed different from typical kids early on, learning to speak more slowly than others and hanging back from sports in school because he wasn’t sure how to play. Now he participates in the Special Olympics for bowling, basketball and other sports.

Tony said he likes going to Ultimate Sustainability to see his friends, particularly Ben Bakke, a bespectacled joke aficionado who's Tony's best friend and Welter's son. Judd and Tony's co-guardian, Carol Murray, also hope Tony can take some of his skills from his volunteer work at Feed My Starving Children and elsewhere to eventually get a job.

All participants and their families set their own goals, Welter said; she'd like her son, for example, to be able to safely cross a street or walk through a parking lot on his own. Sara Ceniceros of St. Paul said she’s hoping her son, Luz, gains everyday knowledge such as how to go to the grocery store or give people enough personal space. He might be able to go to work someday, too.

“He loves animals,” Ceniceros said. “I think he would be happy literally feeding or bringing water to the elephants, anything.”

Ultimate Sustainability hires direct support professionals who specialize in behavioral therapy and autism or other disorders to help participants along the way. Marshall said the group will bring on one professional for every two participants.

Welter declined to provide the program's price but said it's comparable to other adult day services in the area. Part or all of the cost is covered through the state's Department of Human Services and the participants' counties.

Autism can make it hard to socially connect with others and share emotions, but Tony and the other participants were plainly enjoying themselves at Shakopee Bowl one recent morning. Amy Stenseth, the sole woman participant then, stomped triumphantly back to her chair after hitting several pins, while Matt Marshall, Kathryn Marshall's son, clapped firmly at his own successes and flashed the smallest of smiles. Staff member Yolanda Brandon traded knock-knock jokes with Ben between his turns, and the group met every throw with cheers and gentle high-fives.

Matt at one point split his last two pins and sent his second ball right between; in a gruff voice, too quiet to hear more than a couple of feet away, he said, "Field goal."

Even bowling can teach valuable life lessons, Welter said; any bowler must know to take off his jacket, change his shoes, select his ball and start his game, after all. Then there are the tasks of finding water fountains or going to the restroom with a staff member.

"It's teaching the process to everything," she said.

The work at Feed My Starving Children helped in similar ways, with its rules for getting hairnets and washing hands. The participants scooped soy, rice, vitamins and dried vegetables into bags. Tony seemed to enjoy trying to scoop as much rice as possible into his mug for the task, and Amy laughed hard when Welter dropped a bag slightly and sent a few grains flying.

Recreational opportunities like these are immensely valuable for adults with autism but also few and far between, said Ellie Wilson, executive director of the Autism Society of Minnesota, an advocacy and research organization. Most work for adults goes to concerns like employment and housing.

"Everyone acknowledges it's important, there's just not many people that do it," Wilson said. Yet people with autism, a disability defined by social challenges, need activities they love that can connect them meaningfully with others as much as anyone does, if not more so, she added.

Wilson noted early adulthood can be a challenging time for people with autism and their families, since they're transitioning out of school and its structure of support. She's heard from many families about adult programs that don't give their children what they need to become more independent.

"What they’re doing is great and will be profoundly appreciated by people in the community," she said of Ultimate Sustainability. But Wilson added that she hopes the program can eventually include people with every degree of autism, even those who need the most intensive therapy and attention. "There isn't a person on the spectrum who wouldn't benefit from a program like this."

In the meantime, several participants' guardians said they were grateful for Marshall and Welter's work for autistic people of several age groups.

"If it wasn’t for her (Marshall), I don’t know where any of these kids would be," Ceniceros said.

For more information about Ultimate Sustainability, a Shakopee-based program for young adults with autism: