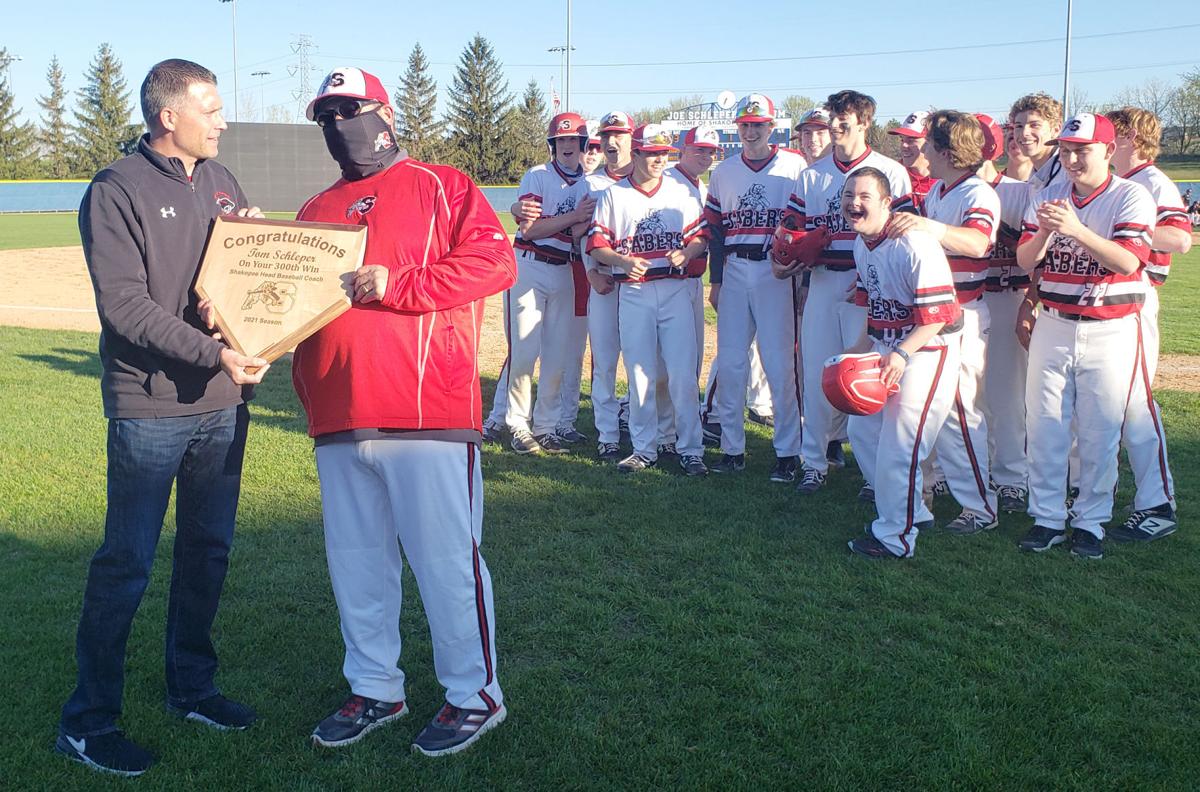 Members of the 2021 Shakopee varsity baseball team celebrate win No. 300 for head coach Tom Schleper, a 5-4 walk-off win over Lakeville South on April 28. 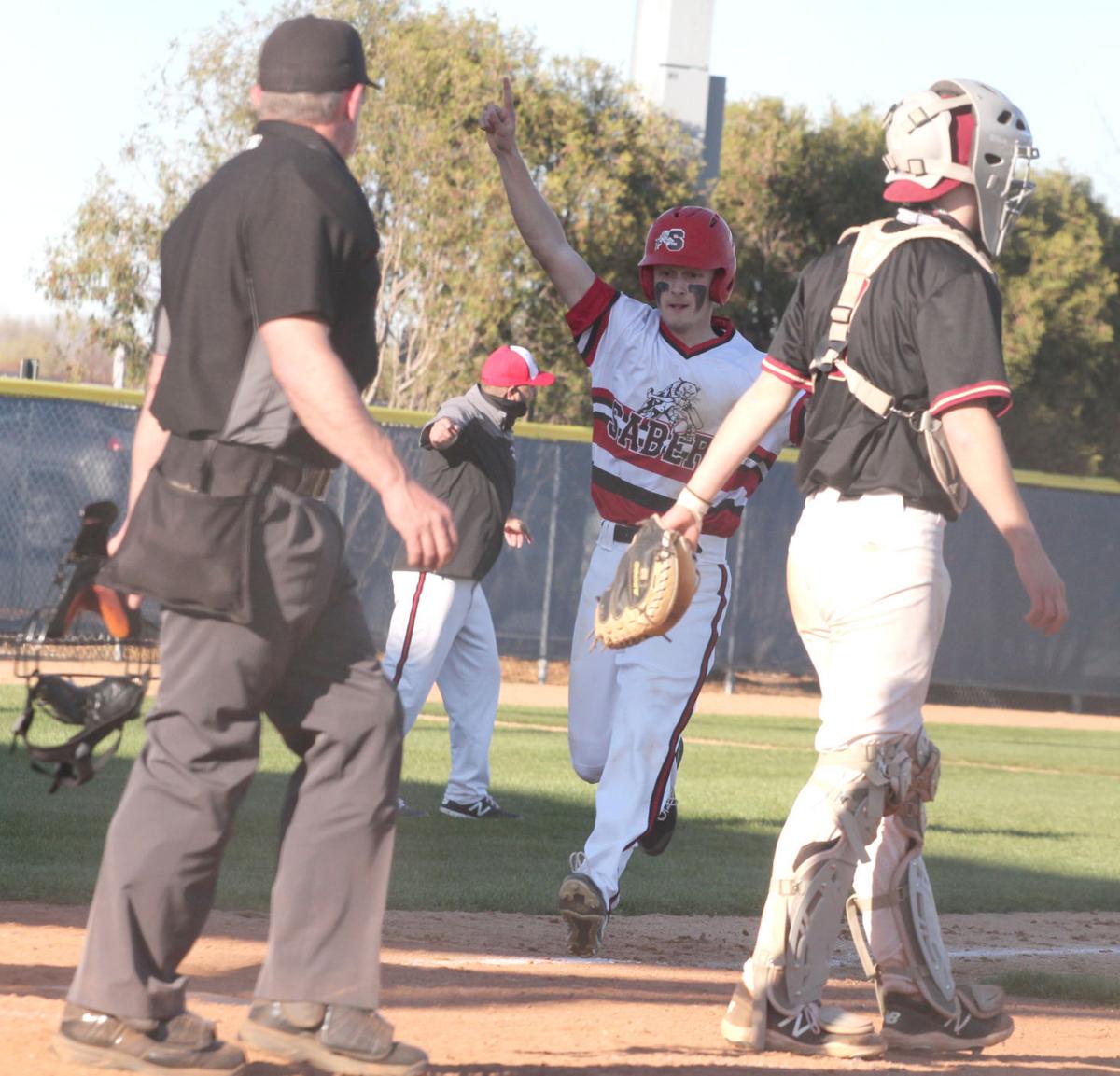 Tayden Fredericks begins the celebration of a walk-off win for Shakopee over Lakeville South. The Sabers scored three times without an out in the seventh inning to prevail 5-4. 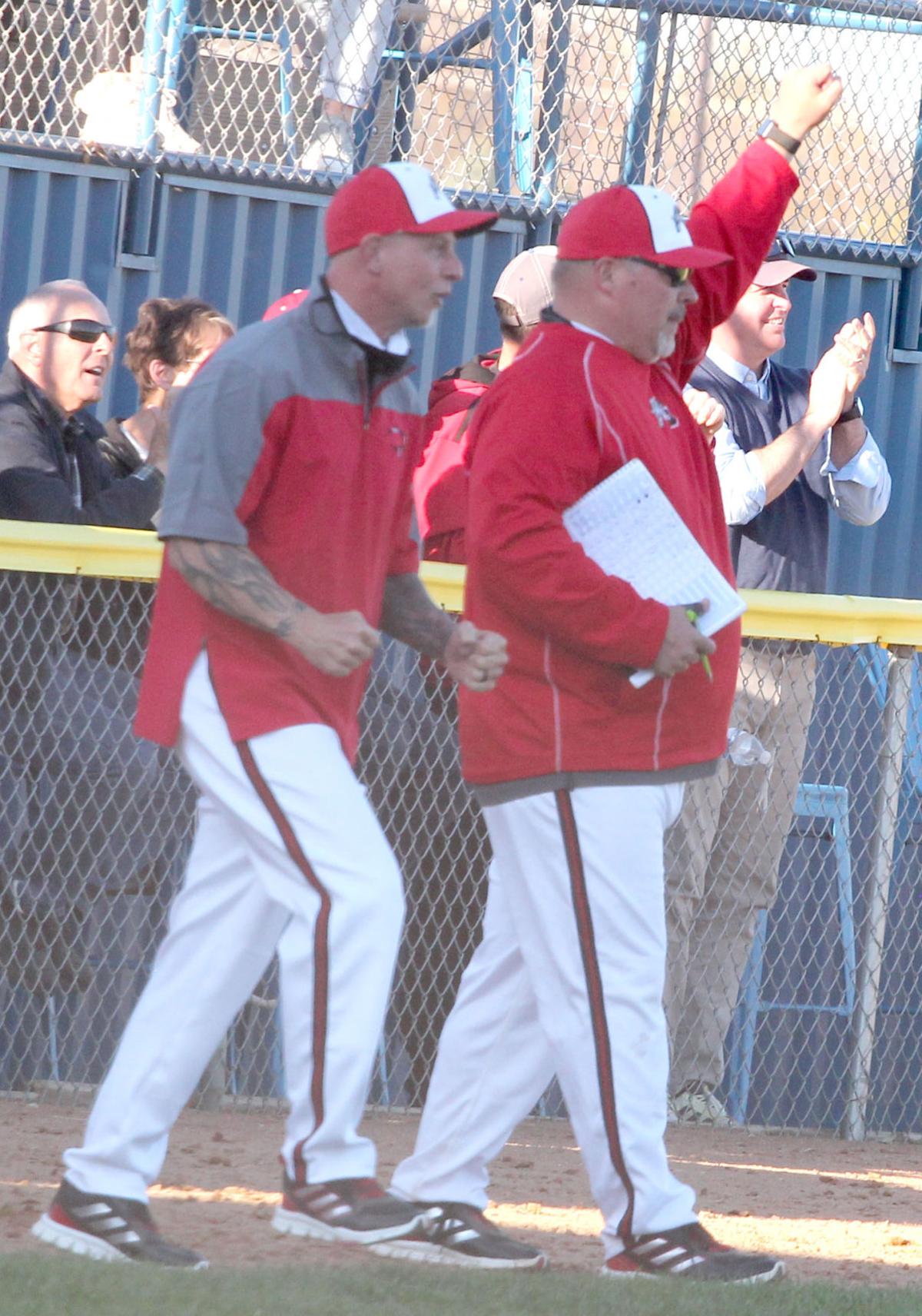 Tom Schleper, right, in his 28th season as Shakopee baseball head coach, celebrates as the winning run rounds third base in a 5-4 walk-off victory over Lakeville South April 28. It was Schleper’s 300th career win. 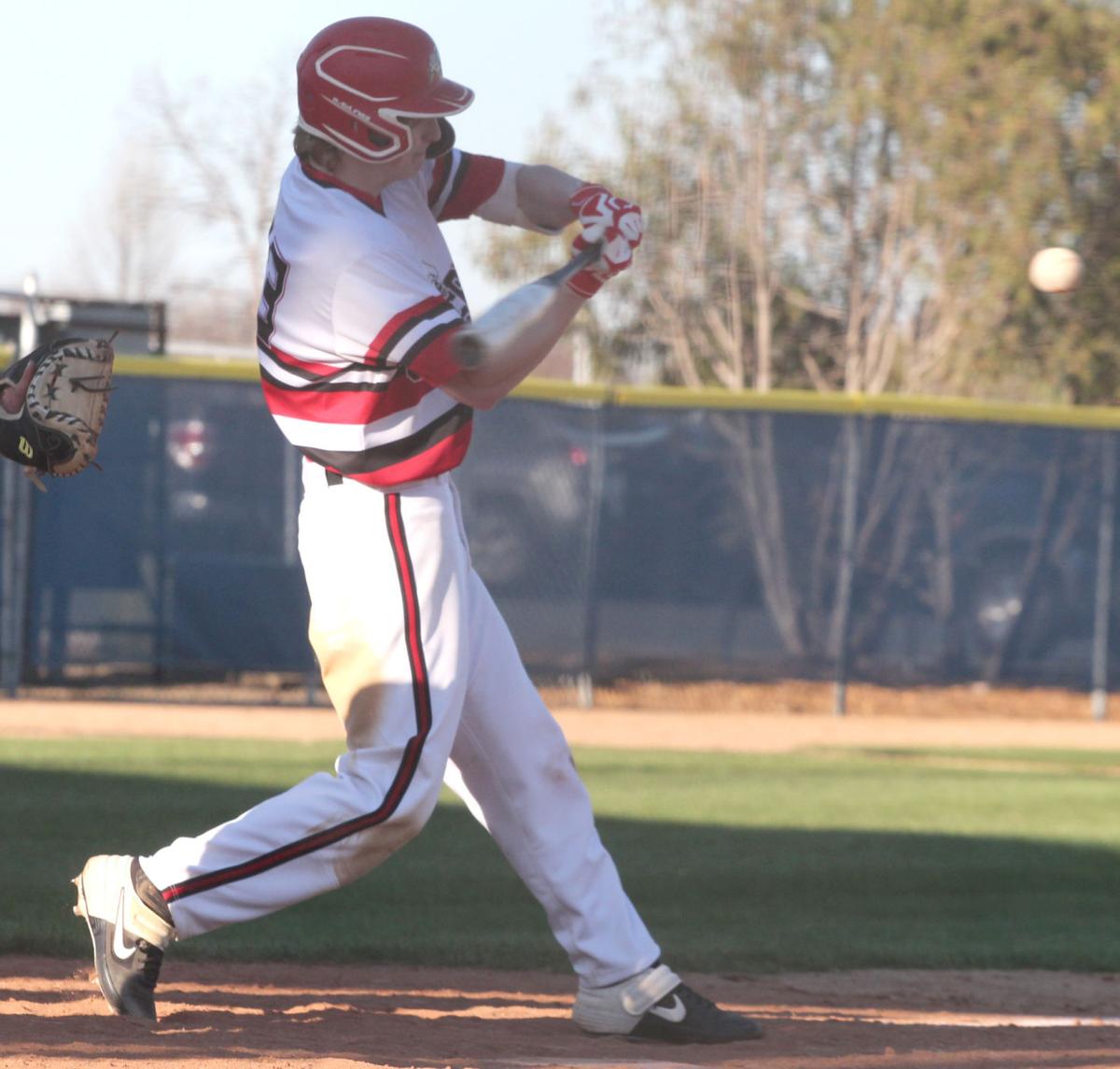 Jacob Skogrand rips a fastball into right-center to plate the winning runs in a walk-off win for Shakopee over Lakeville South 5-4 on April 28.

Members of the 2021 Shakopee varsity baseball team celebrate win No. 300 for head coach Tom Schleper, a 5-4 walk-off win over Lakeville South on April 28.

Tayden Fredericks begins the celebration of a walk-off win for Shakopee over Lakeville South. The Sabers scored three times without an out in the seventh inning to prevail 5-4.

Tom Schleper, right, in his 28th season as Shakopee baseball head coach, celebrates as the winning run rounds third base in a 5-4 walk-off victory over Lakeville South April 28. It was Schleper’s 300th career win.

Jacob Skogrand rips a fastball into right-center to plate the winning runs in a walk-off win for Shakopee over Lakeville South 5-4 on April 28.

Tom Schleper rose from the bucket as soon as the ball dropped in right-center field. He cheered, and then he pulled out his phone to record a few seconds of celebration among Shakopee baseball players.

Little did the Sabers head coach know — he would soon find out from public address announcer Bill Schleper, his brother — that the victory was a milestone.

The 85th coach in Minnesota High School Baseball history to reach the milestone. Schleper jokingly responding with a “Take that, Bob Karn.” Karn, the coach of St. Cloud Cathedral, recently won his 800th career game in season No. 50.

“It’s been quite the ride and a lot of fun. That’s what I keep in perspective. If last year didn’t teach us anything else, it taught us to have the perspective to enjoy this thing. I think as you get older you start to realize there are bigger things in life. So I want to enjoy these moments, enjoy these times with these kids. Let them enjoy it more. I love the interactions with the kids, getting input about different things about the kids a lot more,” Tom Schleper said.

Down 4-2 in the last at-bats in the seventh inning, senior pinch hitters Christian Fiedler and Ethan Hintz reached base on an infield single and an error on a throw from deep in the hole at shortstop, getting things cooking for Shakopee.

A walk to John Sullivan loaded the bases before a sharp single from Joe Roder cut the lead in half at 4-3 with Jacob Skogrand walking the game off with a single to right-center field for the final two runs at 5-4.

It was the first Saber runners to cross home plate since a two-run first inning.

“I’m so happy for our guys. The first two guys up are a couple of seniors who had been starting and didn’t tonight. They got on base, turned it over to the top of the order. You could feel it coming at that point. We lost our first couple of games, we were playing well. I told the guys this is what varsity games are like. A lot of close games. If we pitch and play defense, we’re going to have a chance late in games,” Schleper said.

The Schleper name and Shakopee baseball go hand-in-hand. The stadium in which the Sabers play is named after Tom’s dad, Joe Schleper Sr., who died in 1998. Joe was an athletic director and baseball coach for many years in Shakopee.

Tom is now in his 28th year of coaching Saber varsity baseball. And the youngest of his three sons, Vinny, was on the field to celebrate with teammates, coaches and his dad.

“This was really cool, really special. I’m glad we got the win for him on this field. We were able to come together as a team and pull out another win for him,” Vinny Schleper said.

Vinny recently matched Tom’s Shakopee hitting record of five hits in a game. Moments like these not lost on coach and dad.

“They’re all three different. All three have different personalities. All three are different types of players. You had the catcher, the grinder; the outfielder who didn’t want anything to do with catching; and you have the pitcher and infielder. Each kid has their own perspective, you just try to bring out the best in each one of them,” Tom Schleper said.

Dominick was the oldest of the three Schleper sons, a 2014 Shakopee High School graduate who played football and baseball at St. John’s University in Collegeville. Dominick started 70 games as a Johnnie junior and senior as the team’s primary catcher.

Jack lost his senior season with his dad with the cancellation of the 2020 season. Like his brother and grandfather, he has continued his baseball career at St. John’s University where he has started 27 games as a freshman outfielder, among team leaders at the plate with a .313 average.

Vinny, a junior at Shakopee High School, pitches and plays second base. His relief work was key in a walk-off win over Prior Lake earlier this season.

“You know, it’s always interesting, it can be challenging at times, but it’s a fun experience to have your dad as the coach,” Vinny Schleper said. “It’s humbling to be his son, to play for him in this program that he has spent so many years with. What he’s provided me, my brothers, all Shakopee baseball players, is special. To see him receive some recognition, something he doesn’t like, he’s a humble guy, is really cool.”