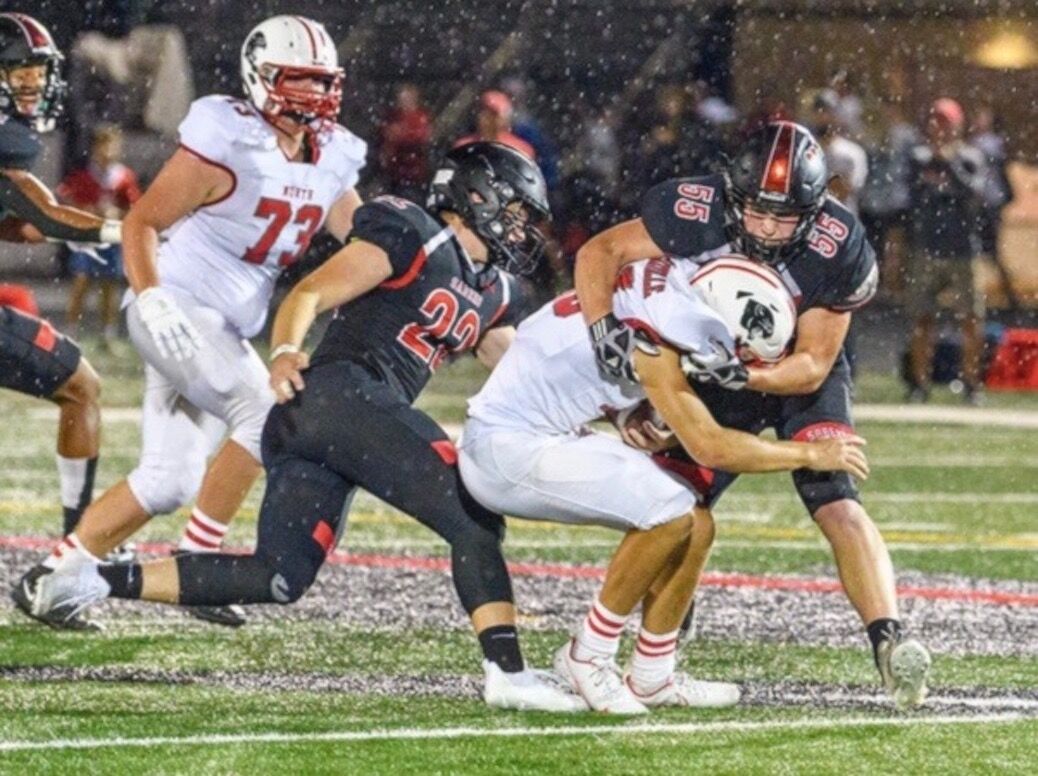 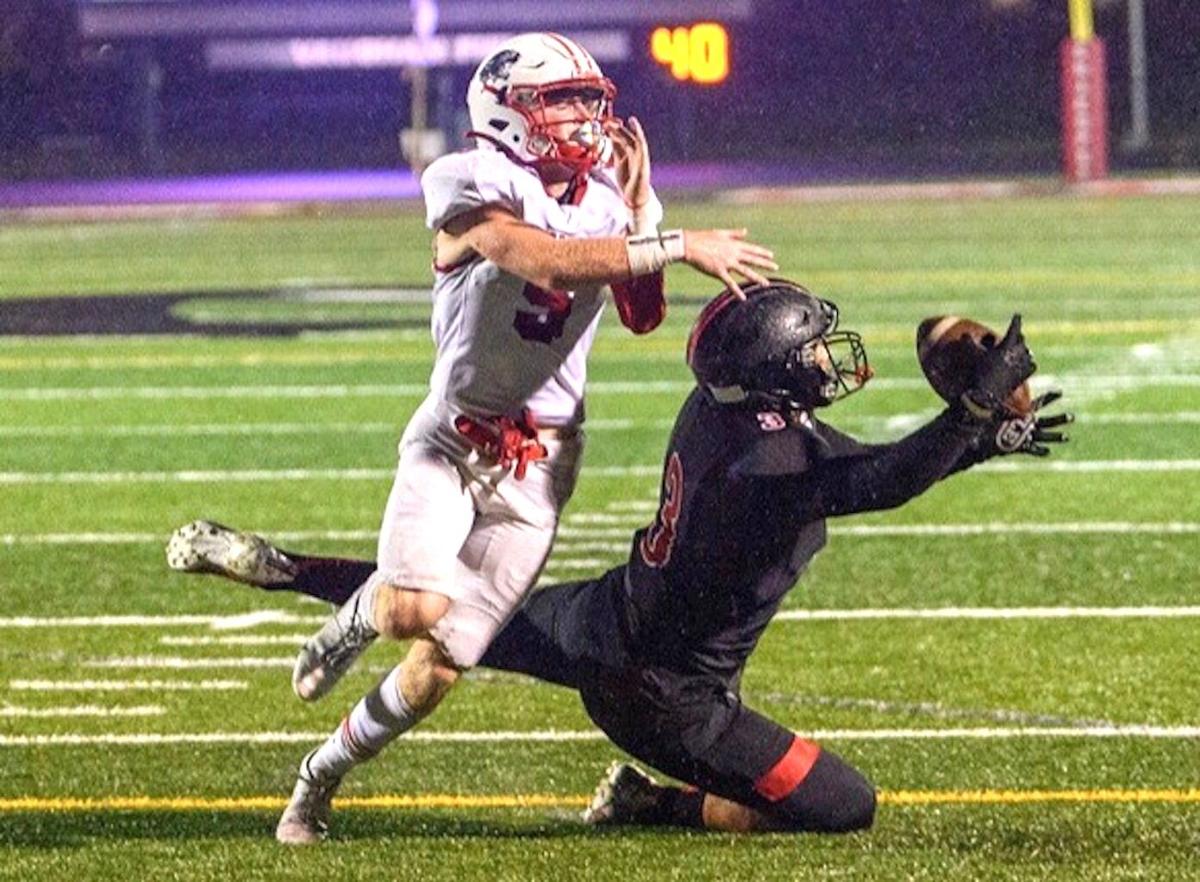 Senior Sam West hauls in a pass while going to the ground in Shakopee’s 9-0 home win over Lakeville North Oct. 1. 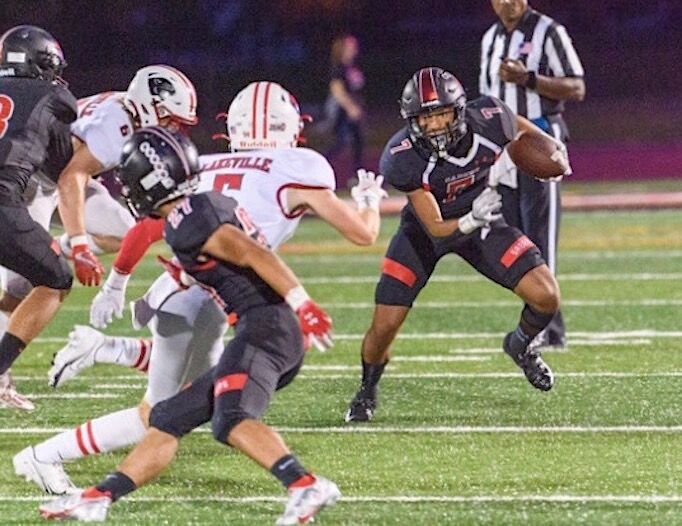 Senior Sam West hauls in a pass while going to the ground in Shakopee’s 9-0 home win over Lakeville North Oct. 1.

The offense powered the Shakopee football team to easy wins in the first four weeks of the season.

The defense came up big for the No. 3-ranked Sabers Oct. 1 with a 9-0 home shutout over Lakeville North. Shakopee held the Panthers to just 56 yards rushing and 30 yards passing to improve to 5-0.

The Sabers ran their winning streak to 11 straight games, which dates back to last season. Shakopee won its final six contests, qualified for the Class 6A state quarterfinals for a second straight year, but didn’t get to play at state due to the COVID-19 pandemic.

Shakopee’s next two games — at No. 4 Eden Prairie (Oct. 8) and home to No. 1 Lakeville South (Oct. 14) — will be great measuring sticks for the team before it ends the regular season Oct. 20 at Eagan.

Meanwhile, Shakopee’s win over Lakeville North came on the heels of a 42-14 triumph at Edina Sept. 24. But in that game, the Sabers lost their starting quarterback, junior Dominic Jackson, to a season-ending knee injury.

Jackson had 276 yards rushing and six touchdowns in the first three weeks, while tossing four touchdown passes. He carried just one time for three yards in the win over the Hornets before getting injured.

Sophomore Leyton Kerns made his first-career start against Lakeville North and he managed the game well. He completed 3 of 5 passes for 99 yards.

The Sabers relied on the power running of junior Jaden Hellerud, who finished with 31 carries for 133 yards, including a 1-yard touchdown run in the fourth quarter with eight minutes to play. That put his team up 9-0.

Shakopee has also relied on Hellerud all season. Through five weeks, he had 132 carries for 764 yards and eight touchdowns.

Junior Owen Forsythe kicked a 22-yard field goal in the first quarter for Shakopee. The 3-0 lead stayed that away until the fourth quarter.

Forsythe missed the extra point on the Sabers’ touchdown, his first miss of the season. He had made 28 of 28 before it, including going 2 for 2 on field goals.

Shakopee’s defense has been mostly stout all season. It held Edina to 14 points and gave up seven to Anoka in a season-opening 45-7 win. Prior Lake and and Farmington scored 27 and 20 points against the Sabers in Week 2 and 3 respectively, but Shakopee’s offense put up 49 and 63 points in those two wins.

Senior Owen Diede continues to lead the Sabers’ defense, netting nine tackles, a sack and two forced fumbles against Lakeville North. Through five games, he had a team-best 43 tackles.

Junior Termaine Fulton Jr., and senior Aaron Lee each had interceptions against the Panthers. Senior Braden Kerns had four tackles.

Senior Nicholas Katona had one catch for 69 yards, which set up the Sabers’ field goal.

Against Edina, Hellerud powered the Sabers, rushing 36 times for 209 yards and two touchdowns. Senior Chandler Ross, Jr. provided some big plays, getting into the end zone three times with 139 yards on the ground on just eight carries.

Kerns also hooked up with Katona on a 26-yard touchdown pass.

Defensively, Kerns led with nine tackles. Lee finished with eight, while also getting an interception, while Diede had seven.

Senior Cole Sutrick also had an interception and forced fumble for Shakopee, while senior Luke Steinhoff picked up a sack.