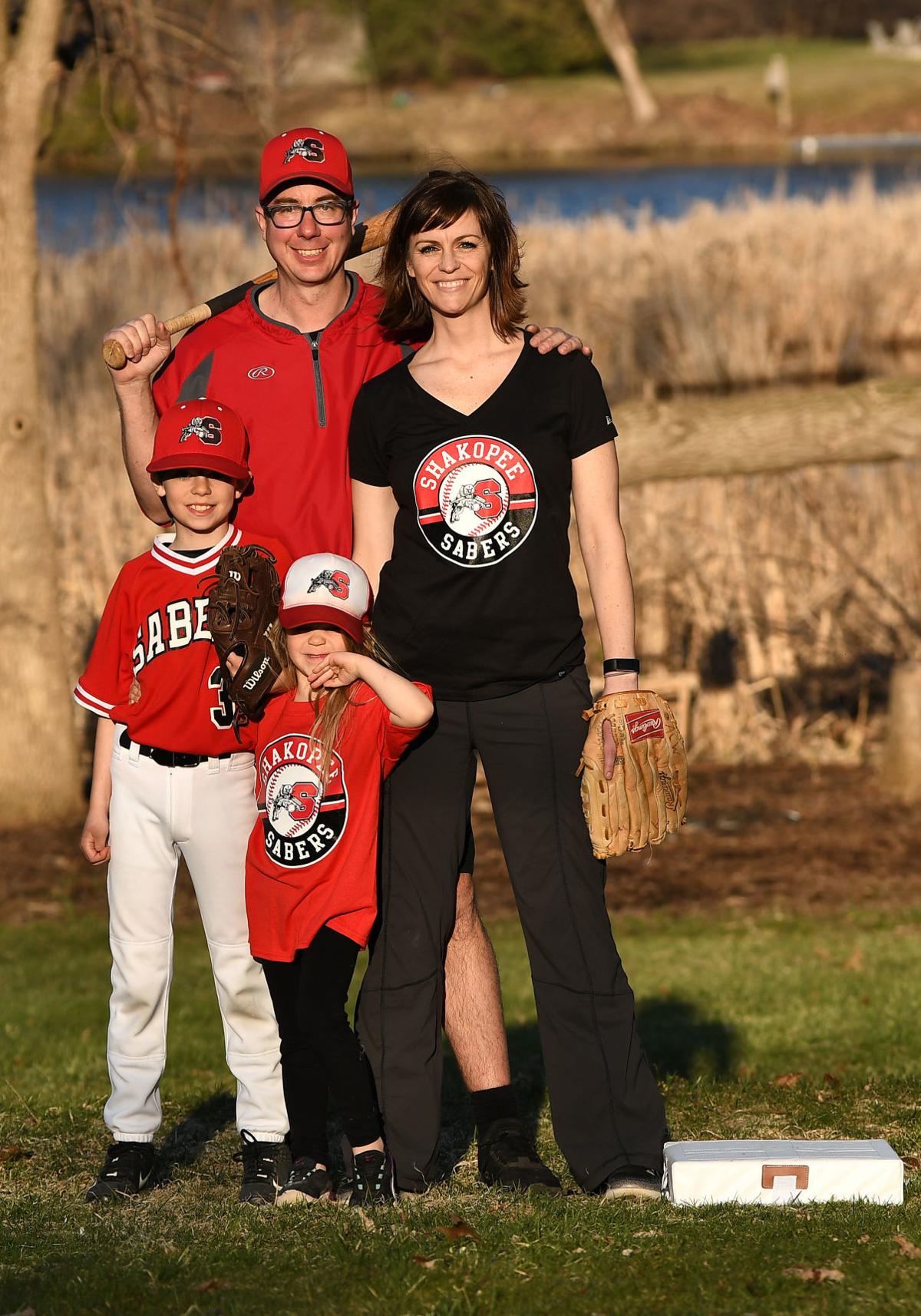 The Wosika Family includes Cooper, 10, left, Piper, 4, center, and their parents Nick and Anna. The family built "the Little Joe" ballpark in their Shakopee backyard. 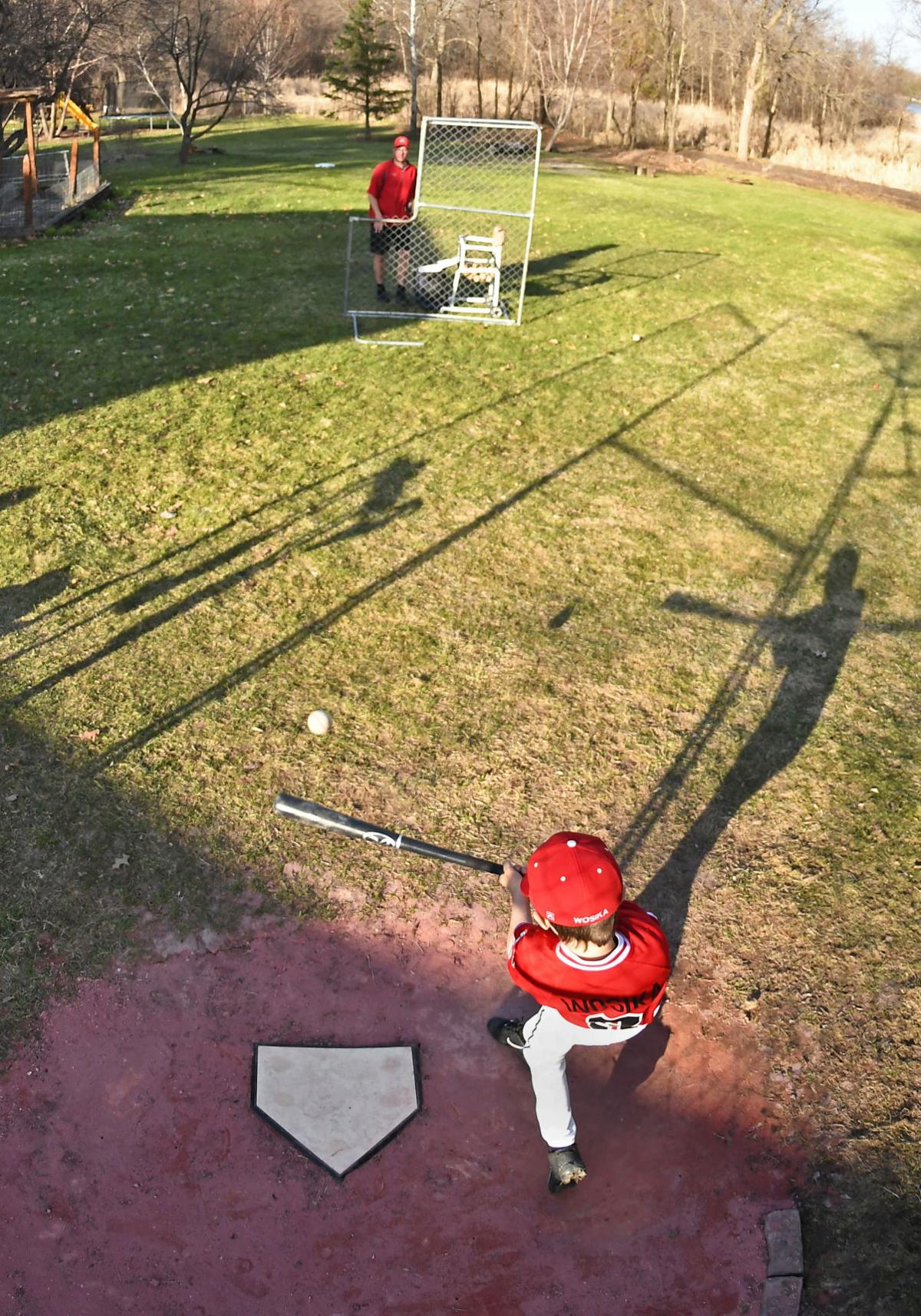 Nick Wosika pitchers to his son Cooper in their backyard ballpark they built in April. 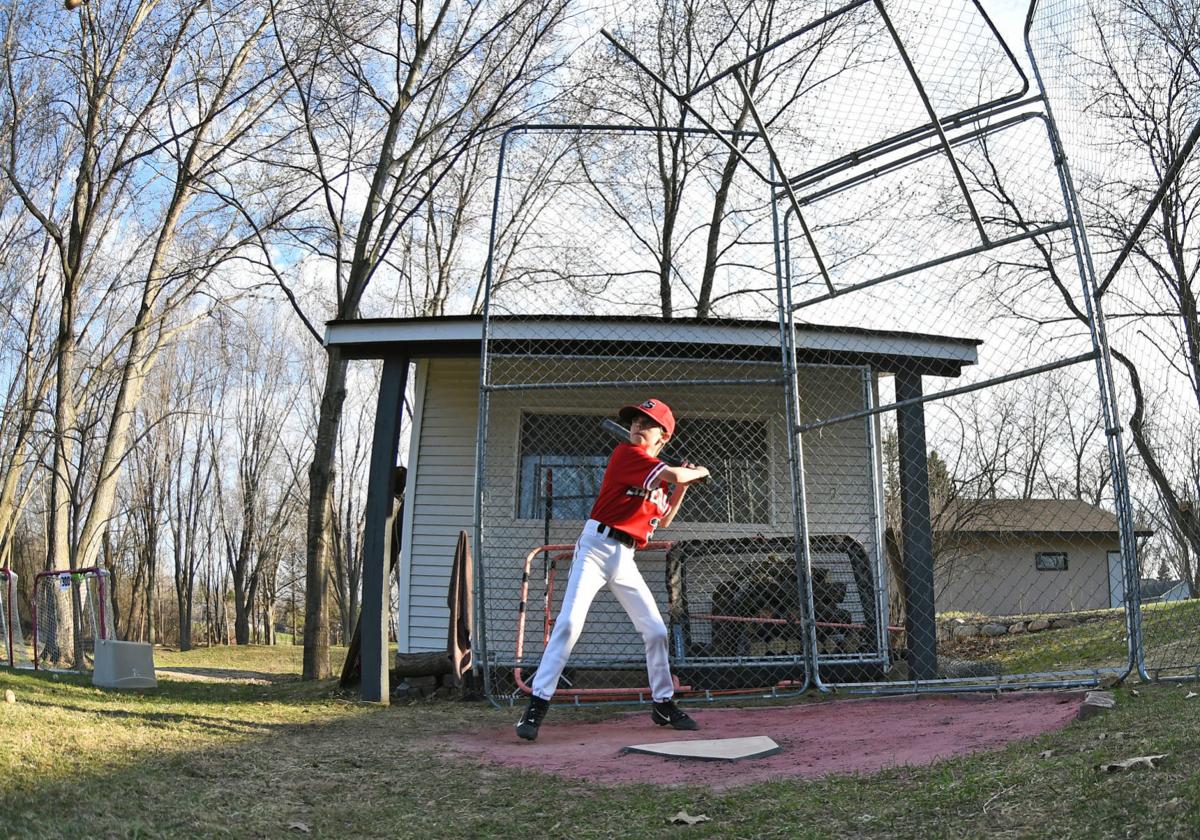 The ballpark started with just the backstop and grew into something bigger. 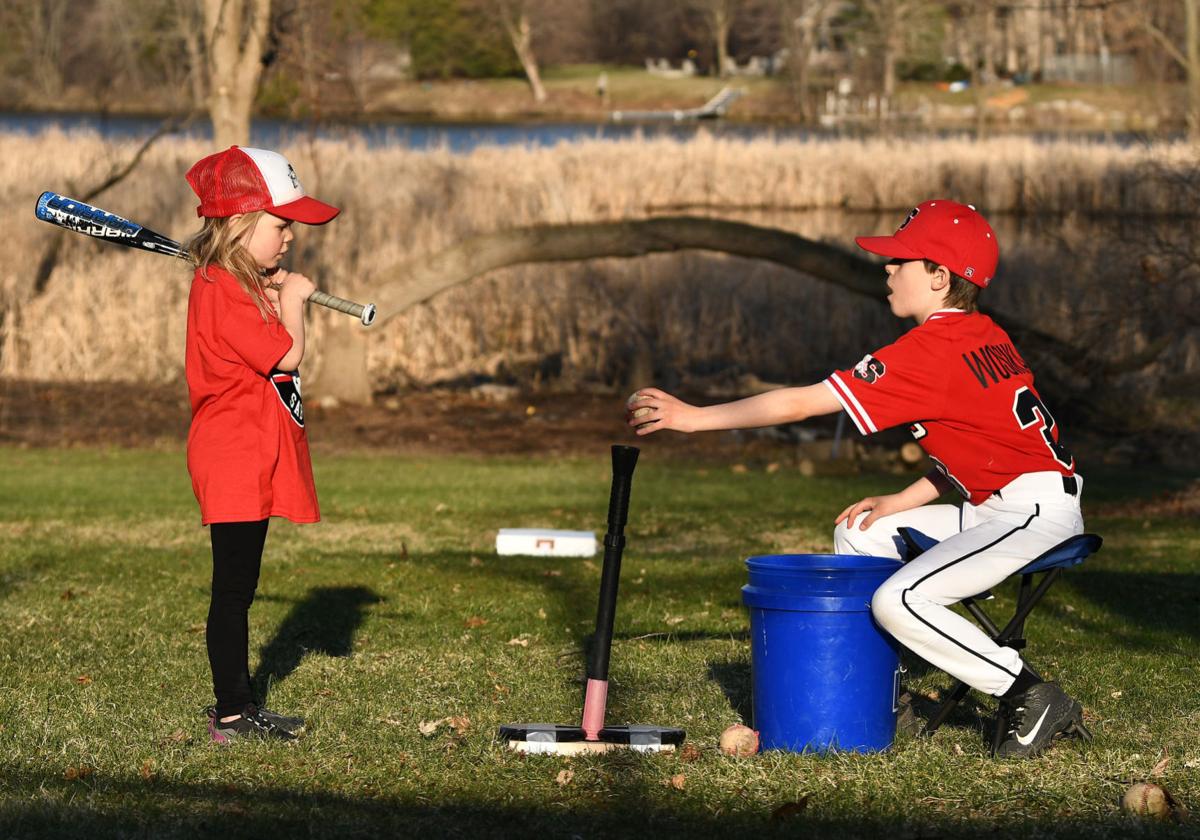 Cooper Wosika puts the ball on the tee for his sister, Piper.

The Wosika Family includes Cooper, 10, left, Piper, 4, center, and their parents Nick and Anna. The family built "the Little Joe" ballpark in their Shakopee backyard.

Nick Wosika pitchers to his son Cooper in their backyard ballpark they built in April.

The ballpark started with just the backstop and grew into something bigger.

Cooper Wosika puts the ball on the tee for his sister, Piper.

What do you do when you have a baseball loving kid but nowhere to play because the summer leagues are suspended and the fields are closed?

If you are Shakopee's Wosika family, you build a ballpark in your backyard.

The family, comprised of parents Nick and Anna and their kids Cooper, 10, and Piper, 4, started building the baseball diamond in March around the time the governor's stay-at-home order was put in place.

"Plans really accelerated after the (stay-at-home) directive," Nick said. "Like every other parent with children in activities, we had to explain that there wouldn't be any spring hockey for sure and that there was a chance baseball could be canceled as well but that wasn't going to stop us from doing what we loved doing as a family. Pandemic aside, this would have happened anyway because who doesn't want a baseball field in their backyard because it's flat-out fun but COVID-19 definitely gave us the time and a really good push."

Since that time the concept of the park grew from just a plate and backstop to something much larger.

"Cooper has always taken (batting practice) from where the batter's box is currently set," Nick said. "Last year, he wore through the grass and it got pretty slippery for him. We had a couple of pieces of fencing from an old dog kennel that came with the house — we've lived here for five years — we used for a backstop but it was always a set it up, take it down when you're done proposition. Nothing permanent. Then he and I started talking about how cool it would be to have a batter's box and a backstop. From there we let our imaginations go wild and it soon turned into creating a mini Target Field complete with a batter's eye and Mauer Pots."

The project begin by building the home plate area which an 8-foot circle with bricks half-mooning the backend. Wosika used five, 50-pound bags of flex-a-clay to fill in the area which allowed him to spike in a home plate.

After that, they needed to make the ballpark bigger to hold Cooper's ever-growing power.

That called for the removal of trees, brush and buckthorn — so much buckthorn.

"I'd cut and my wife Anna, daughter Piper and Coop would be on clear and burn detail," Nick said. "It was a lot of buckthorn trees which is a ridiculously hard wood so I went through like four chainsaw chains before I figured I should probably just learn how to sharpen the chains myself. Clearing the brush added another 10-15 feet to the yard."

"Then it was on to the backstop which is basically four-and-a-half pieces of a repurposed dog kennel," Nick said. "I needed 10 additional steel fence panel clamps otherwise every bit of the fencing was reused. Everything took about four-days with most of the time dedicated to the yard and me staring at a pile of fencing trying to figure out how I would piece it all together."

They added bases later in the project and continued to add to the park they ended up calling "The Little Joe" after Shakopee's Joe Schleper Stadium at Tahpah Park.

"We spent a lot of time at Joe Schleper Stadium last spring and summer," Nick said. "It was Coop's first season of travel ball and there were multiple times last season after games at Tahpah we'd give the boys a choice of Dairy Queen or going to see who was playing at 'The Joe.' I don't recall ever making it to DQ. It didn't matter who was playing. If we saw the lights on we'd go watch. We love that place so it was a no-brainer to call our field 'The Little Joe.'"

The additions include an old bench for a dugout, ballpark monuments honoring all the Twins retired numbers and Jackie Robinson's No. 42, a bat rack, hot dog roller (really a fire pit but imagination is cool), some landscaping here and there, and of course, lights.

The park is far from done but it's functional. The dimensions for the park are as follows:

"The yard isn't exactly level and where we pitch from is a little uphill so the next thing we'll be adding is a portable pitching mound," Nick said. "A permanent one would be great but the distance from pitching rubber to home plate changes a couple of times over the next few years for Coop and I want to be able to move it for him as he ages into the next pitching distance."

The Wosikas have many other ideas for the park.

"A rightfield fence, foul pole, bases, lines, and lights are all on the list," Nick said. "We're looking to add sponsors to that eventual right-field fence and thanks to Dave Johnson we've already secured Shakopee Bowl," Nick said with a laugh. "In reality, who knows if we'll ever be officially done because like anything you can always make improvements and add features. I think as long as it's fun and it inspires the kids to laugh and play we'll continue to add to it."

Is building a ballpark hard?

"It was pretty much what I expected," Nick said. "I would classify the work as rewarding more than anything because as we saw the progress we just wanted to keep going and get more done. It was totally worth it after that first batting pratice session. The sounds of baseball gave us a little bit of normalcy in the midst of a pandemic."

He continued, "There is one hard part of all of this. I help coach the team Coop is on and not being able to have our buddies and their families over to play has definitely been the hardest part of all of this but it's giving us something to look forward too."

"The sounds of baseball gave us a little bit of normalcy in the midst of a pandemic."