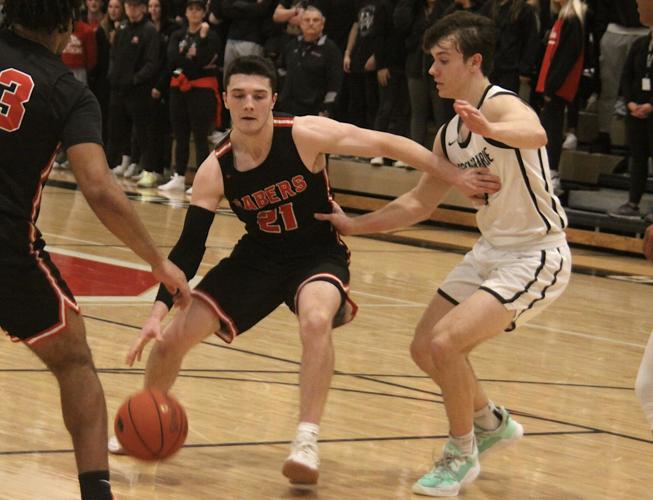 Senior Cade McGraw tries to get past some pressure in top-seeded Shakopee’s 75-60 home loss to second-seeded Eden Prairie in the Section 2AAAA title game March 18. 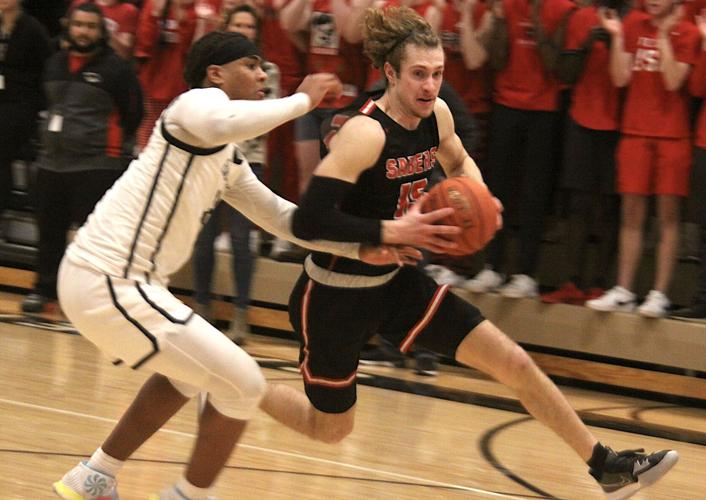 Senior Nick Katona tries to get to the basket in Shakopee’s 75-60 loss to Eden Prairie. 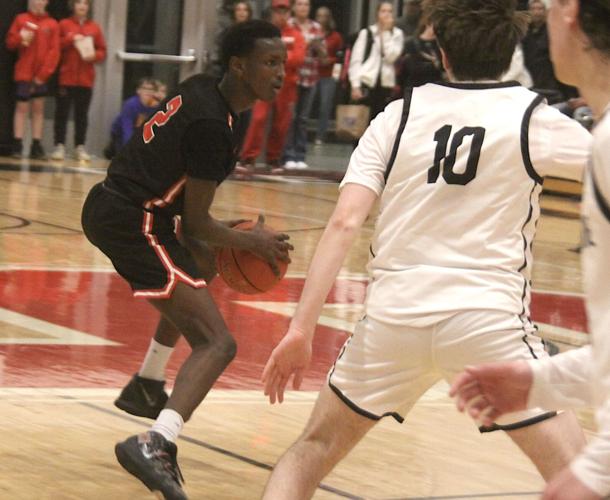 Senior Yonis Mohamud has control of the ball in Shakopee’s 75-60 loss to Eden Prairie.

Senior Cade McGraw tries to get past some pressure in top-seeded Shakopee’s 75-60 home loss to second-seeded Eden Prairie in the Section 2AAAA title game March 18.

Senior Nick Katona tries to get to the basket in Shakopee’s 75-60 loss to Eden Prairie.

Senior Yonis Mohamud has control of the ball in Shakopee’s 75-60 loss to Eden Prairie.

The top-seeded Sabers had no answer for Eden Prairie’s Chiddi Obiazor, as the 6-foot-6 junior scored 27 points, grabbed 16 rebounds and had six blocks in the second-seeded Eagles’ 75-60 road win in the title game March 18.

Obiazor controlled the paint on both ends of the floor.

The Sabers finished the season with 25-4 mark. Eden Prairie snapped the Sabers’ eight-game winning streak heading into the title game.

Shakopee beat Eden Prairie by 83-64 back on Jan. 18. Obizazor scored 23 points in that game, while senior Nick Katona had 23 for the Sabers.

In the rematch, Katona got into foul trouble, picking up his fourth foul with roughly 12 minutes to play with his team down 40-36. A 9-0 Eagles run put the Sabers behind 49-36.

Shakopee played catchup from there, getting as close as seven points (49-42).

“We had a lot of uncharacteristic turnovers and mental mistakes,” Shakopee coach Jacob Dammann told the Minnesota Basketball Hub. “Eden Prairie did a great job, had a great game, and they played a tough defense on us. We had a lot of open looks and just didn’t shoot very well, and this time of year you’ve got to make those shots.”

Katona finished with 15 points and five rebounds. He scored 11 of Shakopee’s first 26 points as the team led 26-22. The Eagles closed the first half on a 10-1 run with Obiazor getting a dunk at the buzzer to go up 32-27.

So the Sabers will have some rebuilding to do next year, but this is a program that’s been know to rebound quickly despite losing a strong senior classes.

Other seniors for Shakopee included Chandler Ross and Josh Magin.

The senior class also led the Sabers to their first South Suburban Conference title since joining the 10-team league at the start of the 2014-15 school year. Shakopee went 16-2 in league play to finish a game ahead of Farmington.

The 60 points scored in the section final were third lowest output for the Sabers this season. The team’s lowest was a 68-51 loss at Lakeville South Feb. 10.

Shakopee scored 55 points in a two-point win over Lakeville North Feb. 22. The Sabers scored 80 or more points in 15 games, all wins.

The Sabers were also state qualifiers in 2014. Before that, Shakopee made six straight trips to state in Class 3A starting in 2000, including winning the title in 2005.

The next season the Sabers made the move to Class 4A.