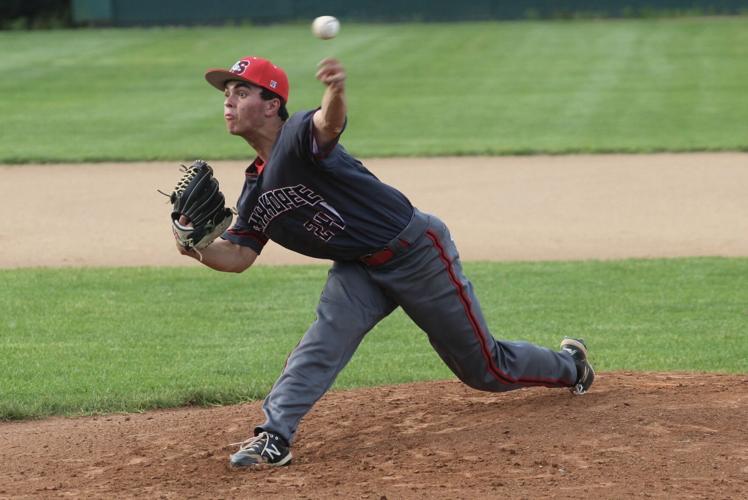 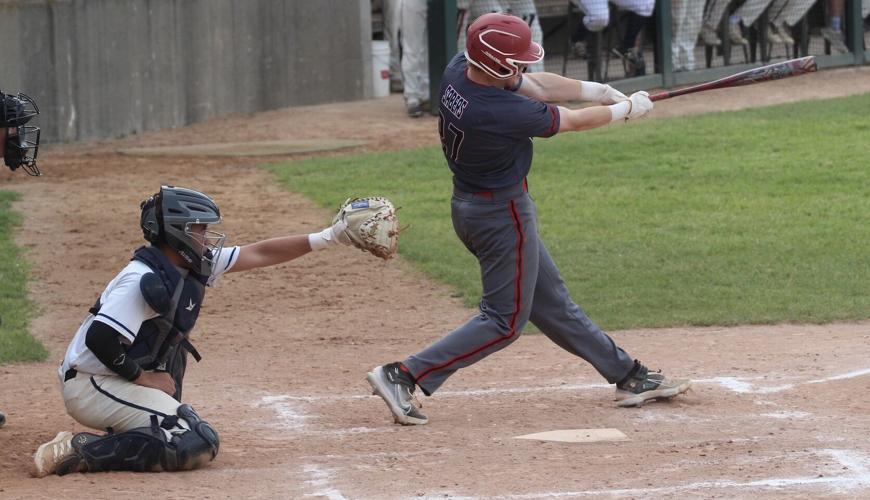 Senior Ryan Vosper takes a big cut at the plate in Shakopee’s 2-0 loss to Chanhassen in the Section 2AAAA title game June 9. 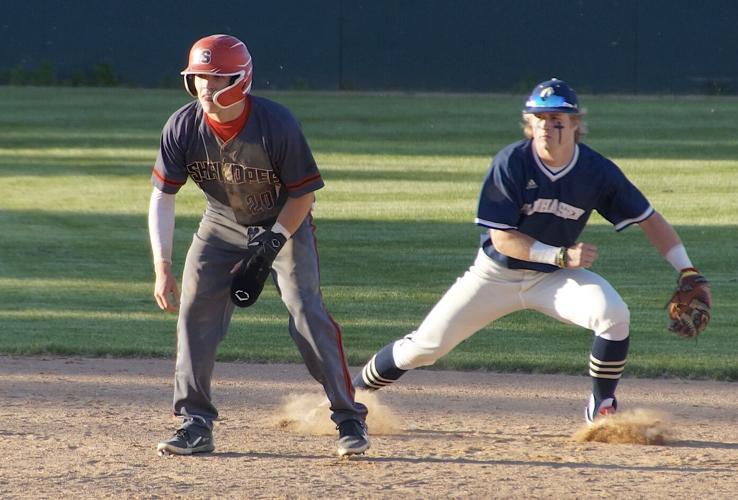 Senior Ashton Pauly takes his lead off second base in Shakopee’s 8-3 win over Chanhassen June 8 to force a winner-take-all game June 9 in Section 2AAAA play.

Senior Ryan Vosper takes a big cut at the plate in Shakopee’s 2-0 loss to Chanhassen in the Section 2AAAA title game June 9.

Senior Ashton Pauly takes his lead off second base in Shakopee’s 8-3 win over Chanhassen June 8 to force a winner-take-all game June 9 in Section 2AAAA play.

The fourth-seeded Sabers won four of six games in Section 2AAAA play, but their bats were silenced in the winner-take-all championship June 9 at third-seeded Chanhassen. Josh Och tossed a one-hit shutout with 12 strikeouts to lift the Storm to a 2-0 victory.

Shakopee had to beat Chanhassen to live another day and did so June 8 with an 8-3 win that forced the deciding game. Senior Vinny Schleper tossed a complete game, allowing three runs (two earned) with four strikeouts.

In the finale, Chanhassen scored both of its runs in the first inning off junior Jaden Case. Both were unearned as Case went the distance, allowing four hits while striking out nine.

Shakopee had a couple of errors in the first inning which led to the two runs.

Shakopee finished the season with a 14-12 record (10-8 in the South Suburban Conference). The team was seeking its first trip to state in 37 years. The last time the Sabers were there was 1983.

Sullivan and Roder sparked the victory over the Storm that forced the deciding game. Roder went 4 for 4 with two runs scored, while Sullivan finished 3 for 5 with an RBI and two runs scored.

Pauly and junior Alex Duncan both doubled and scored a run for the Sabers, while Case, McGraw and McGee each drove in a run.

Chanhassen also earned a 12-1 home win over Shakopee in the winners’ bracket final June 3. The Storm scored nine runs in the third inning to build a 10-1 lead.

Sophomore Jack Morris took the loss for the Sabers, allowing five runs in 2 1/3 innings of work with three strikeouts. Roder gave up five runs (three earned) in one-third of an inning, while Sullivan allowed two runs in 1 1/3 innings.

Shakopee had just two hits in the game and both came from Roder, who went 2 for 3 with an RBI.

After that loss, Shakopee needed to beat fifth-seeded Prior Lake June 7 in the losers bracket to stay alive and did so with a 12-9 home win. Roder went 4 for 4 with a double, two RBIs and four runs scored to lead the way, while Duncan was 2 for 4 with three RBIs.

Junior Caden Lang doubled and drove in three runs for Shakopee, while Ungar doubled and had two RBIs. Junior Tanner Ho also drove in a run.

McGraw got the win in relief, working 3 2/3 innings and allowing three runs with three strikeouts. Sullivan picked up the save with two innings of work, giving up one run while fanning two.

The Sabers overcame an 8-3 deficit after four innings by scoring six runs in the fifth inning and three more in the sixth.