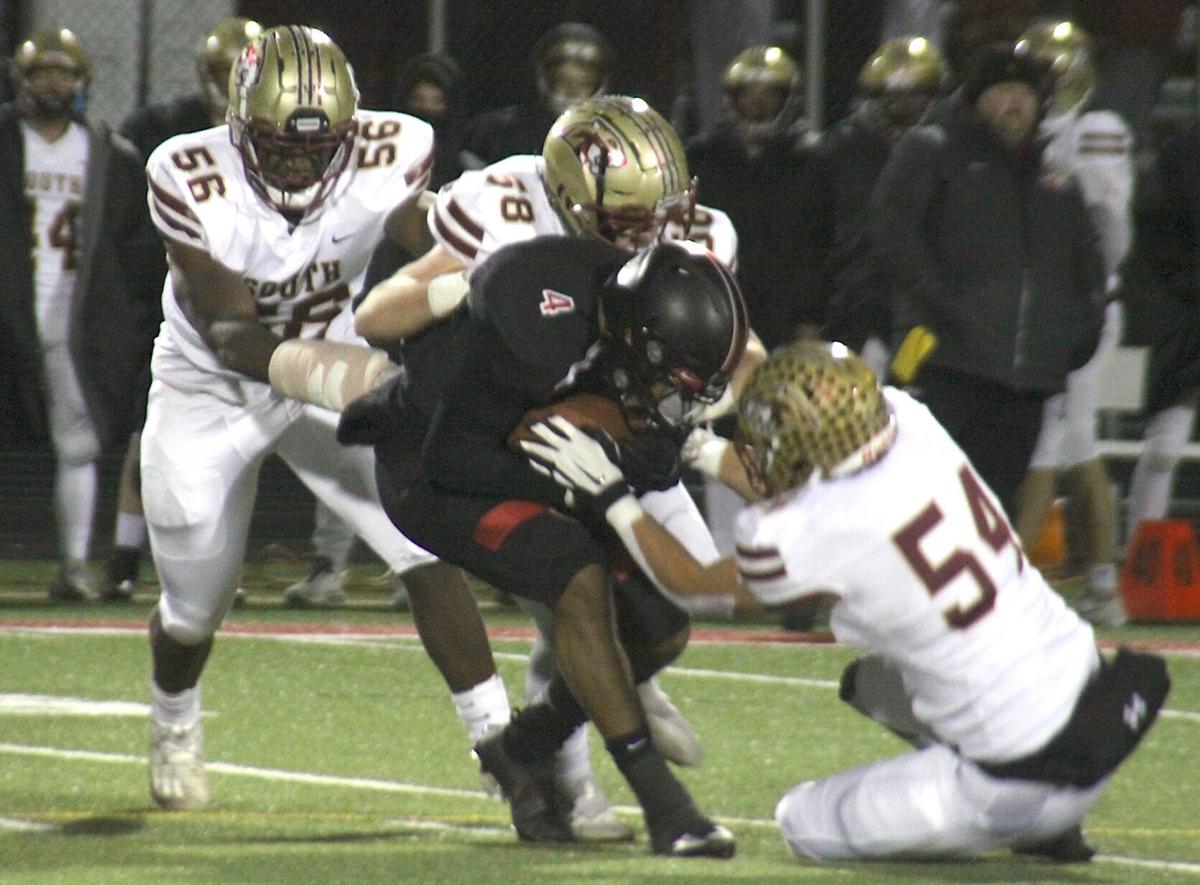 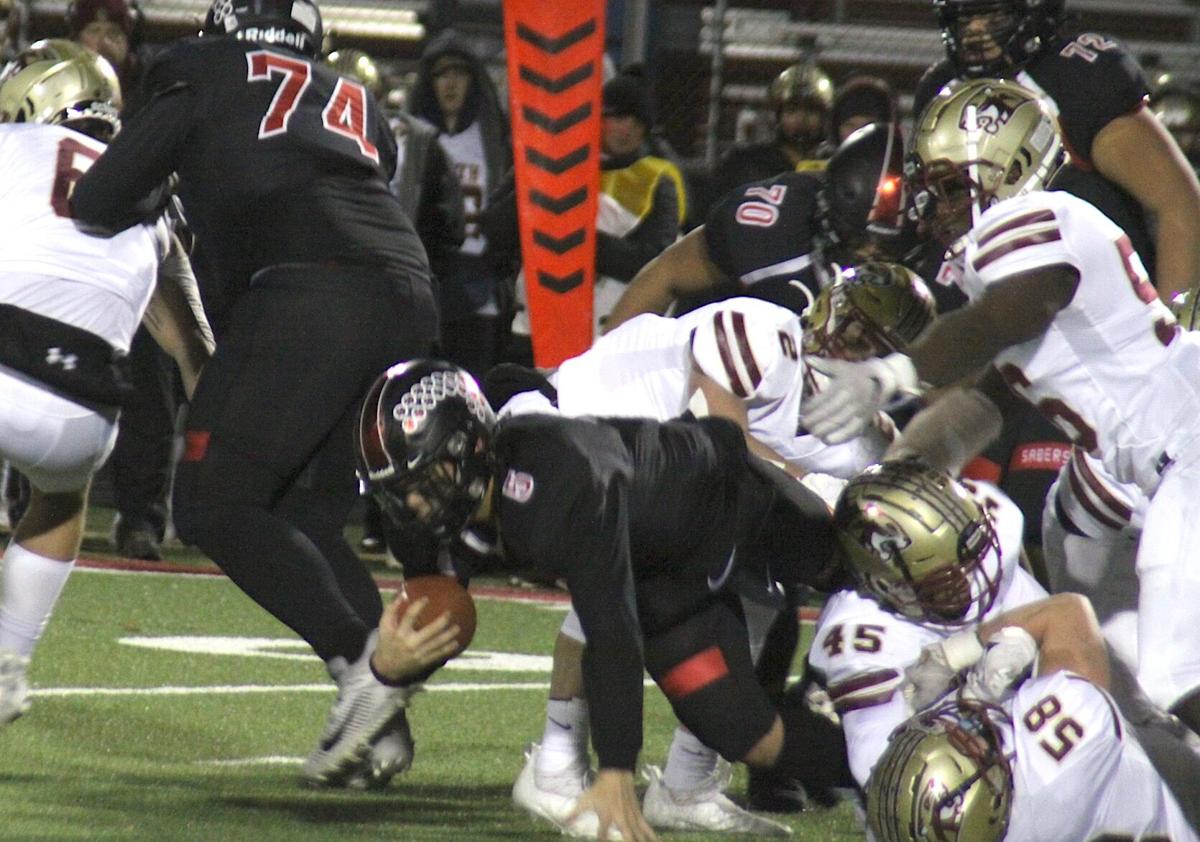 Junior Jaden Hellerud fights for yards in Shakopee’s 42-28 loss to Lakeville South in the Class 6A state quarterfinals Nov. 12 at Stillwater High School. 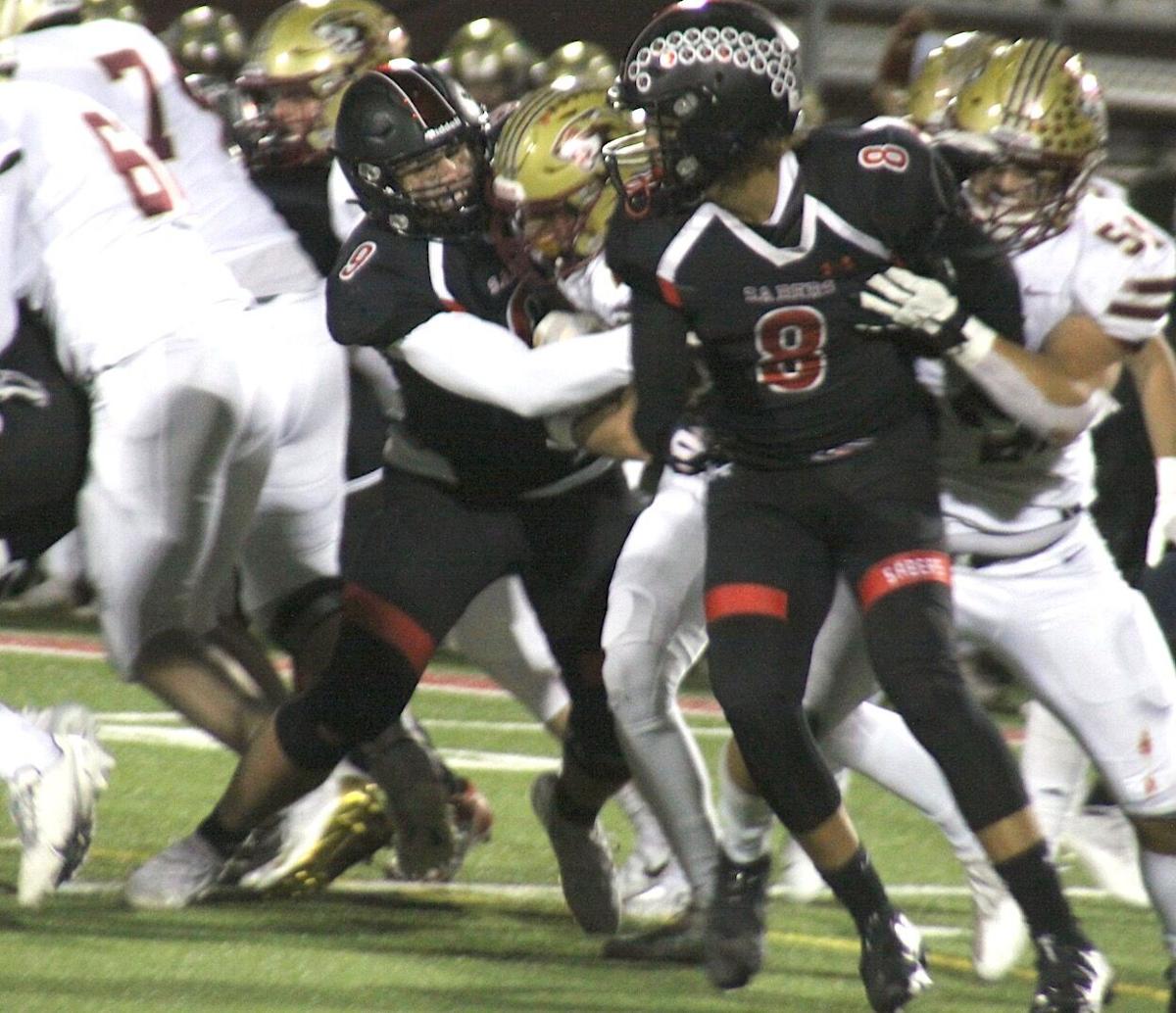 Junior Termaine Fulton Jr. makes a tackle on a run inside in Shakopee’s 42-28 loss to Lakeville South in the Class 6A state quarterfinals Nov. 12 at Stillwater High School. 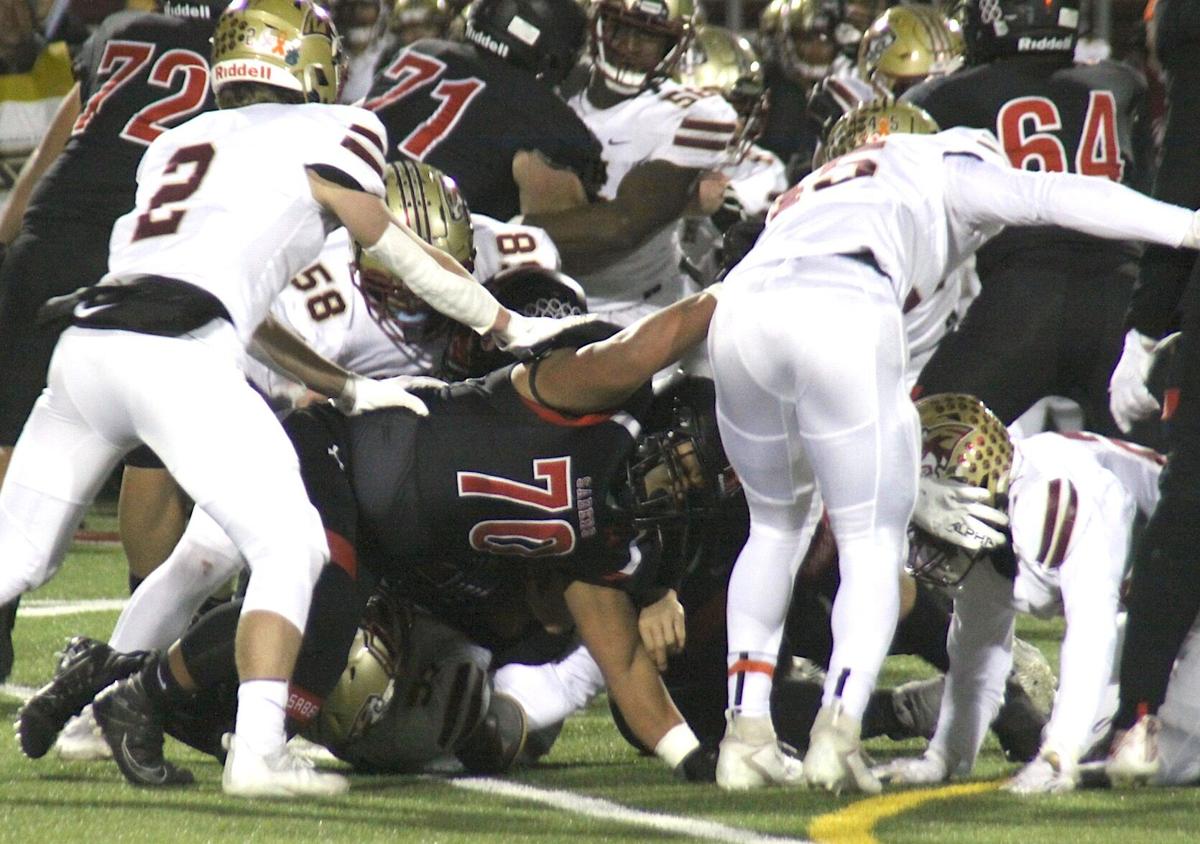 Junior Ethan Vanh (70) gets caught in a pile of players in Shakopee’s 42-28 loss to Lakeville South in the Class 6A state quarterfinals Nov. 12 at Stillwater High School.

Junior Jaden Hellerud fights for yards in Shakopee’s 42-28 loss to Lakeville South in the Class 6A state quarterfinals Nov. 12 at Stillwater High School.

Junior Termaine Fulton Jr. makes a tackle on a run inside in Shakopee’s 42-28 loss to Lakeville South in the Class 6A state quarterfinals Nov. 12 at Stillwater High School.

Junior Ethan Vanh (70) gets caught in a pile of players in Shakopee’s 42-28 loss to Lakeville South in the Class 6A state quarterfinals Nov. 12 at Stillwater High School.

The Shakopee football team showed a lot of fight in the Class 6A quarterfinals Nov. 12 at Stillwater High School.

Twice the Sabers were down two touchdowns to No. 1-ranked and unbeaten Lakeville South, but fought back and had the game tied at 28-28 in the fourth quarter.

But the Cougars’ offense proved to be too difficult to stop in a 42-28 victory.

It was a tough finish to a stellar season for Shakopee. The Sabers finished 8-3 overall with two of their losses to Lakeville South and the other one to No. 2-ranked Eden Prairie.

In 2019, Shakopee made the state field for the first time since 1981. The Sabers lost 9-7 to Lakeville North in the 6A quarterfinals.

Last fall, due to the COVID-19 pandemic, the Class 6A playoffs ended after two rounds, so the Sabers didn’t get a chance to play a state quarterfinal game after playoff wins over Eagan and Champlin Park.

The Sabers’ program is on the rise. They headed into the postseason ranked No. 6 in the state.

One could only wonder what Shakopee could be done in the playoffs if they hadn’t lost their starting quarterback, junior Dominic Jackson, to a knee injury in a Week 4 win over Edina.

In three full games and about a quarter of action against Edina, Jackson threw four touchdown passes and had 279 yards rushing (9.6 yards per carry) and six scores.

Junior Jaden Hellerud powered the Sabers’ offense all season. He finished the year with 1,339 yards rushing and 19 touchdowns. He also threw a touchdown pass.

In the quarterfinal loss to Lakeville South, Hellerud finished with 31 carries for 90 yards and three touchdowns. He scored from a yard out with 39 seconds left in the first half that tied the game at 21-21 at the break.

Lakeville South led 28-21 going into the fourth quarter, before Hellerud scored on a 5-yard run to tie the game with 10:08 to play.

The Cougars answered that Sabers touchdown, taking a 35-28 lead with 7:18 to go. Lakeville South was able to get the stop on defense they needed, forcing an intentional grounding penalty that Shakopee couldn’t recover from.

Lakeville South iced the game with a 1-yard touchdown with 1:43 left to play.

The Cougars rushed for 343 yards, completing one pass in the third quarter that went 21 yards for a touchdown.

Senior Elijah Sandridge rushed six times for 81 yards for the Sabers, including a 36-yard scoring run in the second quarter.

Hellerud completed 5 of 13 passes for 64 yards. Senior Sam West caught four of those for 60 yards.

On defense, senior Aaron Lee led the Sabers with 13 tackles, while Owen Diede had 11 and senior Nicholas Katona had eight. Juniors Termaine Fulton Jr. and Jacob Ruud each had seven tackles, while junior Ethan Welna had six and senior Josh Magin had five.

For the season, Diede led the Sabers with 108 tackles, including three sacks and four forced fumbles. Lee finished with 64 tackles and had a team-best four interceptions.

Senior Chandler Ross Jr. was the Sabers’ second-leading rusher with 566 yards, adding five touchdowns. Sandridge had 494 yards on the ground and four scores.

Katona led Shakopee in receiving with 12 catches for 276 yards and seven touchdowns. West had 11 grabs for 186 yards and a score.

Sophomore Leyton Kerns got some time at quarterback when Jackson went out. He threw for one touchdown and ran for 101 yards. Junior Garrison Monroe competed three passes on the season and two went for touchdowns, while he added 188 yards and a score on the ground.

Junior Ari Gaiters had 182 yards rushing and three scores for the Sabers.