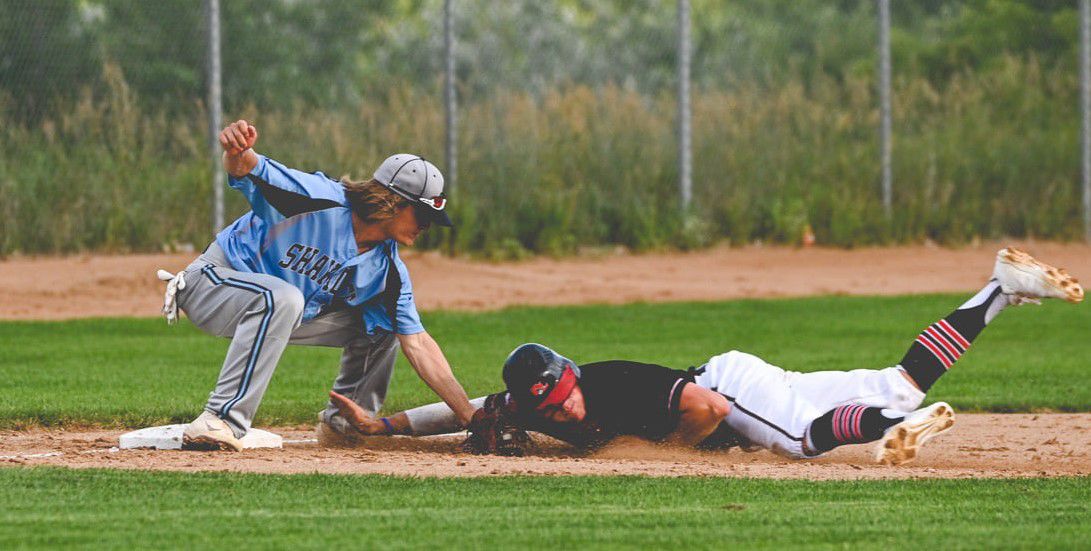 Shakopee third baseman Kolin Williams puts the tag on a Prior Lake base runner. 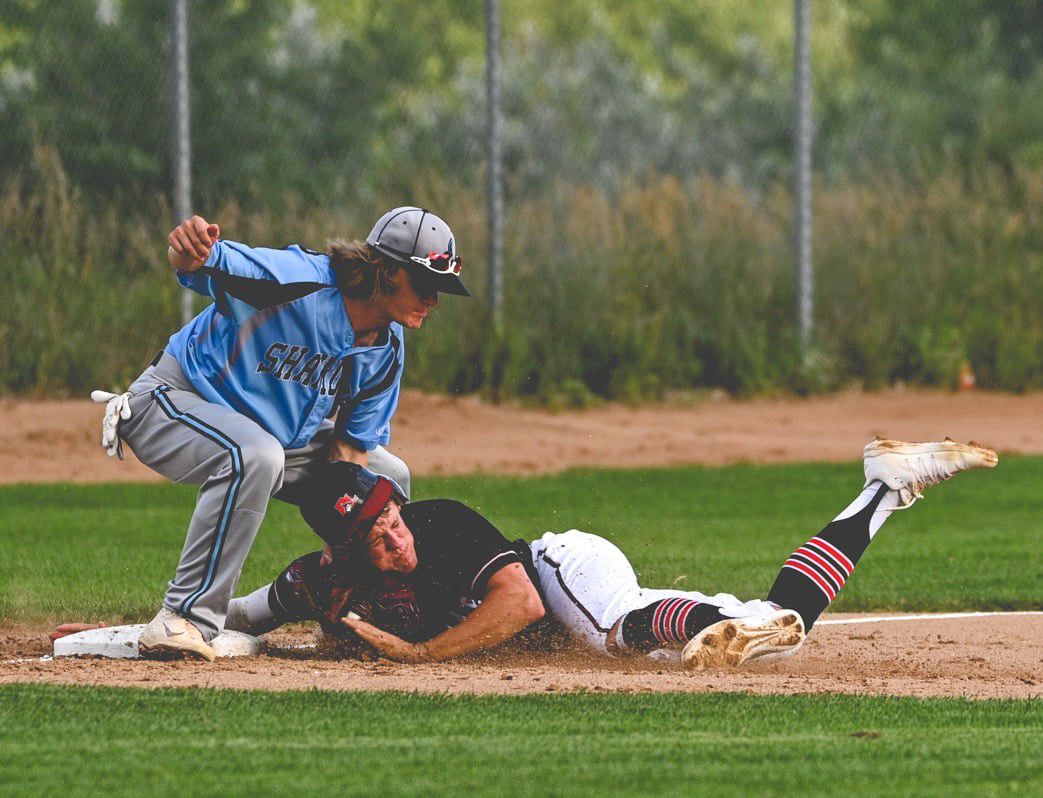 Kolin Williams tags out a Prior Lake runner at third base. 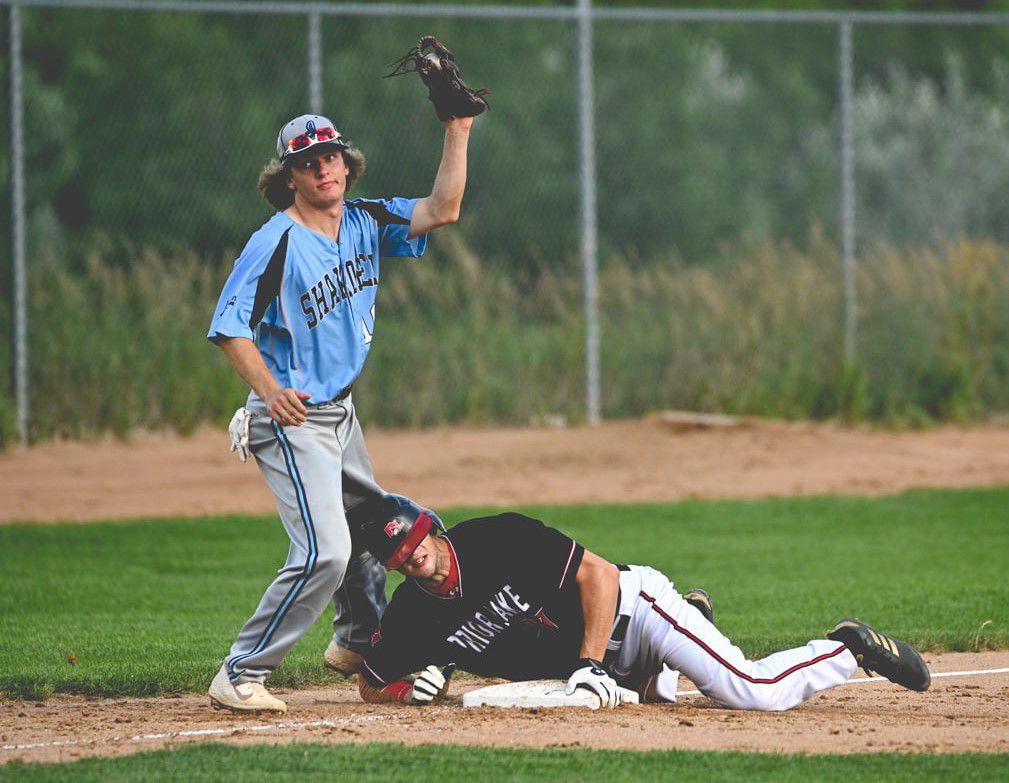 Kolin Williams shows the umpire the ball to get the out call.

Shakopee third baseman Kolin Williams puts the tag on a Prior Lake base runner.

Kolin Williams tags out a Prior Lake runner at third base.

Kolin Williams shows the umpire the ball to get the out call.

The Shakopee Indians are heading into the playoffs with a two-game win streak.

Shakopee defeated the Prior Lake Jays twice in the past week to wrap up the regular season with a 5-5 River Valley League record. That puts the Indians in fourth place in the league standings.

The Section 3B playoffs are set to begin on Sunday night and Shakopee will be either the No. 4 or No. 5 seed depending on final game of the season between Burnsville and Eagan finishes. Both those teams are 4-5 on the season and can improve to 5-5 and tie Shakopee for fourth place.

The Section 3B playoffs will continue for the next two weeks and conclude on Thursday, Aug. 13 or Friday, Aug. 14. The top four finishers in the playoffs will qualify for the state tournament. To see the playoff brackets visit rvleast.leagues.mnbaseball.org.

“We will go as our pitching goes,” Shakopee Manager Gary Schleper said.

Shakopee defeated the Prior Lake Jays 9-0 on Sunday night and followed that up with a 13-3 win against the Jays on Tuesday.

In the 13-3 win, Shakopee starting pitcher Zach Henderson gave up just three runs in six innings to get the win.

Shakopee fell behind 1-0 in the first inning but a Dominick Schleper first inning single plated two runs for a 2-1 lead.

Prior Lake tied in the second before the Indians pulled away in the third inning as they sent 10 batters to the plate and scored six times for a 8-2 lead.

The rally started with a leadoff walk to Kyle Ryan. Brandon Olson and Steven Boldt followed with back-to-back singles that scored Ryan for a 3-2 lead.

After an out, Dominick Schleper was walked to load the bases and Patrick Rients doubled home two runs to push the lead to 5-2.

A couple wild pitches scored two more runs and a sacrifice fly pushed the score to 8-2.

Shakopee added two runs in the sixth and three more in the eighth inning to win 13-3.

In the win on Sunday in Prior Lake, Shakopee plodded along until scoring five runs in the ninth inning to win 9-0.

The Indians scored single runs in the first, fourth, fifth and sixth innings to go up 4-0. Rients hit a home run in the sixth inning.

In the ninth inning, Dominick Schleper had the big hit with a bases loaded single to score two runs.

Caleb Kranz started on the mound for Shakopee and gave up just three hits in five innings of work. Alex Schneider pitched the final four innings giving up just one hit.

Prior to sweeping the Jays, Shakopee lost to the Chaska Cubs 9-2 last Friday at Athletic Park in Chaska.

The Cubs scored seven runs in the first four innings and cruised to the win.

John Hellkamp scored both runs for the Indians in the loss.